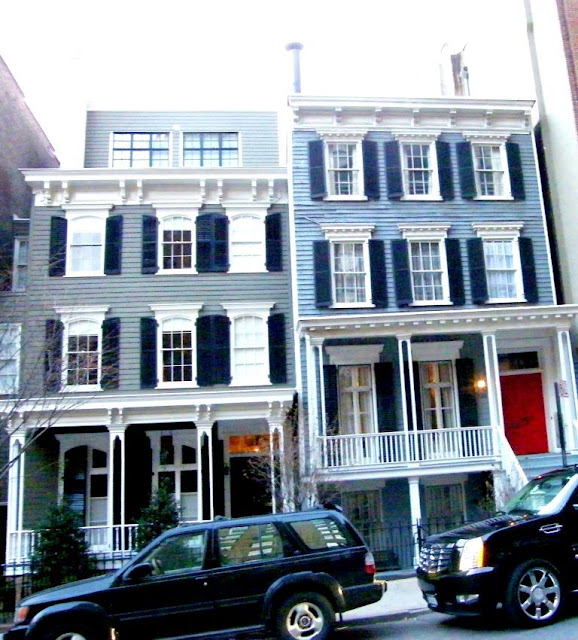 North of the established city, surrounded mostly by farm land, Adam C. Flanagan hired Albor Howell to build his three-story wooden house at what would become 122 East 92nd Street. Howell was a carpenter and builder by trade and he produced for Flanagan a delightful Italianate-style home.

Openwork columns supported the ample front porch where the cooling summer breezes would be enjoyed. Floor-to-ceiling parlor windows could be opened behind the louvered shutters to allow the night air to circulate. Slightly arched second and third story windows added to the visual appeal under a deeply overhanging cornice.

Flanagan lived in his modest and respectable frame house for a decade before the neighborhood began building up. In 1870 two homes appeared directly across the street, and in 1871 the house next door, at No. 120, was erected.

No. 120 was also a frame building, snuggled directly up against the Flanagan house. Three wooden stories sat on a high, brick basement level, and were accessed by a steep wooden staircase. With porch columns nearly matching its next door neighbor, the new house was a perfect compliment.

Like the older home, too, No. 120 had a double entrance door to the right, with two floor-to-ceiling French doors in the parlor. A cast iron fence protected the small front yards of both properties. Adam Flanagan’s new neighbor would be one of the last frame houses in Manhattan; the building law of 1877 would forbid the construction of wooden buildings.

By 1894 No. 120 was owned by Anton Hoffman, a cooper. That was the year that the entire block of residents took issue with the Salvation Army at 107 East 92nd Street, complaining about the noise of the cymbals and drums.  A petition was signed that asserted “It disturbs our rest Sundays and is using up our nerves. One of our neighbors is suffering from nervous prostration and it is simply preventing his recovery.”

Hoffman chimed in, saying that when, on the day of his daughter’s death the Salvation Army was asked “not to parade or to beat drums or cymbals until after the funeral, the reply was: ‘We have a permit to parade, and we are going to do it. Forward march.’”

The Hoffmans lived at No. 120 East 92nd Street for most of the next century; a total of 70 years. During that time there were no changes made to the structure. Similarly, No. 122 managed to ignore the 20th Century, with little alteration until renovations were made in 2005 and a set-back roof addition was added.

The two little wooden houses create a picturesque and enchanting ensemble amidst the brick and steel of Uptown Manhattan.  The New York City Landmarks Preservation Commission said that No. 120 "...comes as a delightful surprise.  Time and change have passed it by, as well as the very similar frame house that adjoins it to the east."
Posted by Tom Miller at 2:43 AM