Photo Unity Center New York
When Jay Gould died in 1892 he left his four children between $65 and $70 million.

Helen Miller Gould, however, was different.

Trained in finance by her father, she attended the New York University School of Law. While her siblings frolicked the summers away in Newport, she was content to spend quiet time at Lyndhurst, Jay Gould’s magnificent Gothic Revival estate in Tarrytown-on-Hudson. Embarrassed by her father’s cut-throat reputation, Helen spent the rest of her life supporting various charities.

Helen remained in the Gould mansion on 5th Avenue at 47th Street while her siblings moved on. As time passed, though, there was the problem of adequate accommodations for her horses and carriages. 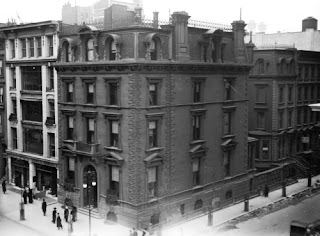 On November 13, 1901 Helen M. Gould purchased for $107,500 the four-story brownstone residence of Lambert Suydam at 212 West 59th Street. The property extended south to 58th Street where the Suydam’s private stable was located, in line with the stables of other neighboring millionaires. Curious about the sale, The New York Times sent a reporter to the Fifth Avenue house for more information.

The Gould mansion -- 5th Avenue at 47th Street﻿
“When inquiry was made at Miss Gould’s residence last evening she sent word that she did not care to say anything in regard to the purchase,” reported the Times.

It would not be long before Helen Gould’s intentions were obvious. The Suydam stable was demolished to make way for her own private carriage house; one fit for royalty.

Designed by York & Sawyer the grand brick and limestone stable was based on King Henry IV’s 17th Century Place des Vosges in Paris. Completed in 1903, the four levels of the French Renaissance structure housed the Gould horses and carriages, hay and feed, as well as apartments for the coachman and groom.

The great, soaring chimneys on either end, the attenuated, hipped slate roof and the ornate iron-railed balcony on over the arched entranceway joined to create a palatial structure for draft animals. Sawyer added a near-whimsical touch in the huge, carved limestone tethering rings on either side of the entrance.

Helen Gould finally married in 1913 at the age of 45. Time Magazine said of her “she was plain, plump, not much concerned with ‘Society’ – she dedicated herself to good works while her brothers and sister went out in the world.” She died in 1938, The New York Times calling her “the best loved woman in the country.” 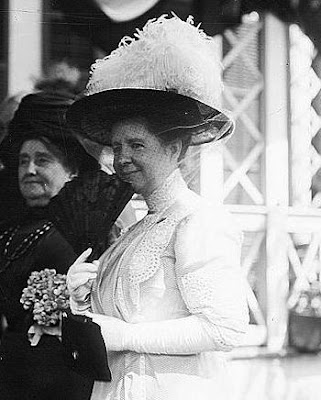 Helen Miller Gould
The Gould carriage house is now the headquarters of The Unity Center New York, which describes itself as a “worldwide Spiritual Movement dedicated to helping people discover and express their divine potential.”

The regal Parisian-style stable was designated a New York City landmark on August 29, 1989.
Posted by Tom Miller at 2:41 AM