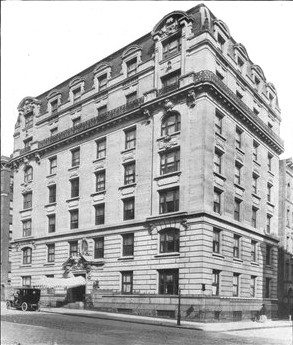 1261 Madison Avenue in 1910 - NYPL Collection
When Andrew Carnegie began the four-year long construction of his brick Georgian mansion in 1899 far north of the established Millionaire’s Mile, the affluent took notice. In seeking open air, garden space and a view of Central Park, Carnegie initiated a trend of building in the area which would become known as Carnegie Hill.

Mansions and luxury apartment buildings began replacing squatters’ shacks, farmhouses and tenement buildings as the wealthy moved north. Gilbert Brown, recognizing the trend and the opportunity, quickly purchased the large lot of land at the northeast corner of Madison Avenue and 90th Street where he would build an elegant and exclusive apartment building. 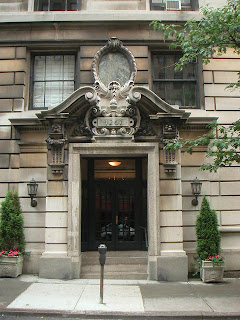 Brown commissioned Buchman & Fox to design the building and construction began in 1900. Completed a year later, the restrained Beaux Arts structure was seven stories tall, including a fashionable tiled mansard roof. Built for only 14 families – two apartments per floor – it was supported by a rusticated, two-story limestone base accentuated by a grand entranceway.
Around the sixth floor, an ornate cast iron common balcony girded the building – a common feature in European apartment buildings but quite rare in New York.

While elite apartment buildings being constructed on the west side of the Park were given names – The Dakota, The Doral and the San Remo, for instance – those on the east side preferred to be known only by their address. Brown marketed 1261 Madison Avenue to the well-heeled by providing a telephone in every apartment (exceedingly ahead of its time), two elevators (one for tenants and the other for deliveries and servants), steel safes, two bathrooms, two servants’ rooms, and two refrigerators. The kitchens walls were tile-lined and boasted “sanitary ventilated garbage closets.”

In 1910, The World’s New York Apartment House Album called it “One of the most select and attractive apartment houses on Madison avenue, location being particularly choice, overlooking the grounds of Andrew Carnegie…Apartments are spacious and well arranged, containing every modern convenience. They comprise eight and nine rooms, with unusual closet space.”


The residents of 1261 Madison Avenue were, for the most part, moneyed professionals. On July 25, 1912 one of those tenants, Dr. Louis Cohn, was driving his motorcar through Central Park when a horse-drawn vehicle pulled in front of another automobile driven by Dr. Allen Goode. Goode, in trying to avoid the carriage, ran headlong into Dr. Cohn’s car.
Mrs. Goode suffered from shock and although both “machines were damaged…their owners were able to drive them away from the scene.”
Nearly a century after Dr. Cohn’s auto car accident, the apartment building to which he returned looks essentially the same as it did when it opened in 1901. Designated a city landmark in 1974, the Landmarks Preservation Commission deemed it “a fine example of the French Beaux-Arts style.” 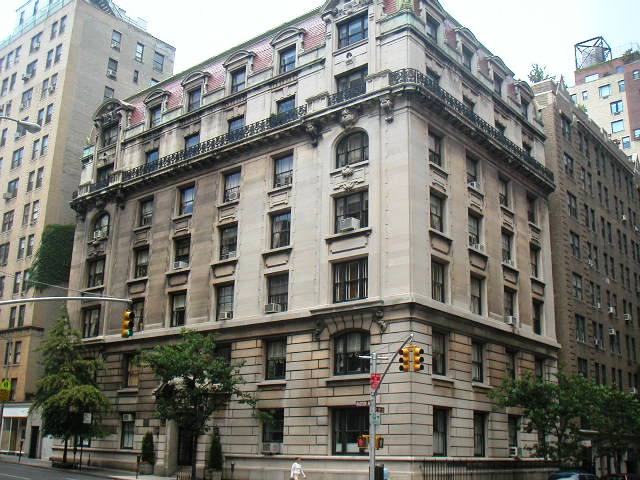