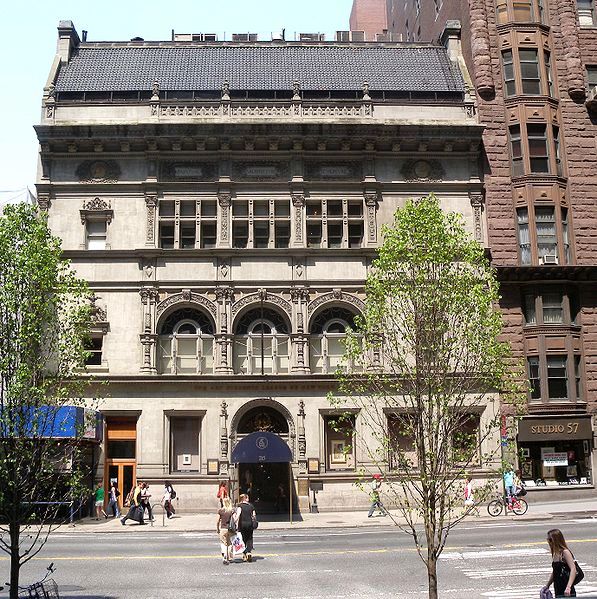 In 1889 the Art Students League joined forces with the Society of American Artists, the Society of Painters in Pastel, the New York Art Guild and the Architectural League to form the American Fine Arts Society. The concept of common interests among architects and artists was somewhat novel. “The societies that have now combined,” applauded The New York Times, “contain most of the younger and more energetic artists in architecture, painting and sculpture.”


Almost immediately the group began its search for a building for art education and annual exhibitions. Not wanting to step on any well-established toes, the group stressed that “it is not a rival of the Academy of Design;” yet The New York Times reported that “certain active spirits among the artists of New York have been hard at work on the promotion of a scheme which may bear important results to the fine arts in America. This is the establishment of a body to be called The Fine Arts Society, in a new building devoted to art purposes only.”

Wealthy benefactors like John Jacob Astor, Cornelius and George Vanderbilt, Edwin Booth, Levi Morton and Pierre Lorillard quickly purchased life memberships, creating a financial foundation. On October 3 the trustees met – including esteemed names such as Henry Hardenbergh, Louis Tiffany and Daniel French --to discuss interest in a site on 43rd Street for their new building, which they anticipated would cost about $210,000 including the land.

The plans for the 43rd Street site fell through, but by December of 1890 the Society had purchased for $154,000 the plot of land on 57th Street, running through to 58th Street, next to the new Osborne Apartments and diagonally across from Carnegie Hall, still being constructed. A competition among 38 architects resulted in the commission going to the Society’s Secretary, Henry Hardenberg and his partners, William C. Hunting and John C. Jacobsen.

The building was completed in 1892. Hardenbergh adapted its design from the 16th Century hunting lodge of King Francis I in the forest of Fontainebleau. The architect gave the impression of the 3-story structure by lighting the fourth floor with skylights and no windows. White marble, ornate terra cotta and buff brick combined to produce a rich and stately façade. 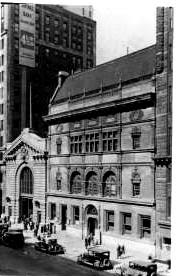 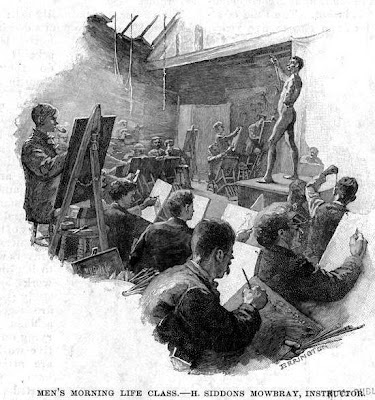 The main hall was said to be the largest of its kind in the country, modeled after the salon of George Petit in Paris. A “supper room” was installed in the basement along with studios for the Department of Sculpture. To the rear, on 58th Street, was the large Vanderbilt Gallery, an exhibition gallery with a glass roof

The New York Times called it “an elaborate structure.”

On December 30th at the Architectural League’s dinner, George W. Vanderbilt presented the Society with a gift of $100,000 to pay off the outstanding debt on the building.

The concept of exhibition space solely for sculpture and not as “a tag-on” for paintings so impressed the art critic for The New York Times that he belittled European venues in comparison. “The great sculpture halls of the Louvre, the Vatican and the Munich Glyptothek, even the delightful little sculpture entrance to the Luxembourg, are not they cold, hard, severe, suggesting with their rows of chiseled marble the show rooms of the stone cutter at the cemetery’s entrance?”

On May 3, 1901, fire erupted on the fourth floor just as men and women in evening wear alighted from their carriages to attend the fancy dress ball of the Society of American Fakirs. Paints, oils, turpentine and students’ tools had all been heaped together in a corner, according to fire fighters. The conflagration bent iron beams and small explosions caused one wall to collapse.

In the meantime, those who arrived for the society ball were disappointed. They walked to the clubhouse of the American Society of Civil Engineers, hoping to be allowed to have their dance. “The superintendant politely told them they would have to go elsewhere for their dance,” reported The Times. “The young women importuned him to no purpose, and at last they all started for their various homes.”

When word of the fire reached the Salmagundi Club, panic set in. Many of the artists had valuable works of art on exhibition. Rumors raged that everything inside the building had been destroyed and club members rushed to the scene. In the Vanderbilt Gallery alone, paintings on exhibition were valued at $400,000.

Amazingly, the fire was extinguished and no artworks were damaged either by fire or water.

Over time the building became the sole property of The Art Students League. What had started out as a small group intent on teaching art was now one of the foremost fine art schools in the world. Early instructors included William Merritt Chase, Augustus Saint-Gaudens, Daniel Chester French, Thomas Eakins, and Childe Hassam. Norman Rockwell fondly recalled his days as a student here in his autobiography.

Later in the century ground-breaking artists such as Louis Nevelson, Roy Lichtenstein and Mark Rothko either taught or lectured here.

The AIA Guide to New York City calls The Art Students League “A stately French Renaissance pile, grand without being grandiloquent…Now a venerable art school, it has the air of the old Parisian Ecole des Beaux Arts, but the spirit of New York now.”

Within the historic building, which was designated a New York City landmark in 1968 and was added to the National Register of Historic Places in 1980, the League is run by artists for artists. The League offers no degrees nor diplomas. According to its official website, “One comes purely for the pursuit of art.”
Posted by Tom Miller at 3:16 AM