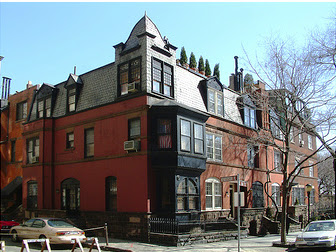 John C. Henderson was a successful businessman in 1880, having made his fortune in the hat, fur,“straw goods” and other businesses. As the neighborhood known as Yorkville began developing he saw an opportunity to increase that fortune.

Yorkville was established in the first half of the 19th Century by German immigrants, later joined by a substantial Hungarian population. Approximately five miles north of the city, it was surrounded in the pre-Civil War period by sprawling, bucolic country estates of wealthy New Yorkers like John Jacob Astor and Archibald Gracie.

By the second half of the century the area was becoming increasingly developed as families sought to escape the congested city. In response, Henderson purchased approximately one half acre of land between 86th Street and 87th Street at East End Avenue where he planned a quaint, dead-end street lined with uniform homes “for persons of moderate means.”


He commissioned the firm of Lamb & Rich to design his houses -- thirty-two in all -- that would comprise a charming mini-village. Completed in 1882, the architects produced two rows of Queen Anne houses of red brick and terra cotta that romantically mix architectural bits of Elizabethan, Flemish and classic styles. Turrets and gables, towers and arches blend to create the feel of a unified, storybook enclave. While each house shares similar details, like the fish-scale slate mansard roofs with dormers; each is distinctly individual.

The houses sat back from the sidewalk just enough to permit tiny yards for shrubs and flowers.

Despite The Real Estate Record & Guide's assertion that the little dead-end street would give residents "the disagreeable feeling of living in what the French call a bag's end," Henderson’s speculative project was a success.  His modest three-story houses were quickly sold or rented (yearly rent being about $650). The quaint charm of Henderson Place, however, soon caused his plan to backfire.  The homes which he intended for families of “modest means” attractived those of far higher incomes. 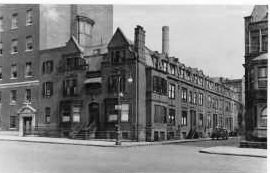 By the middle of the 20th Century well-to-do families populated Henderson Place. Mr. and Mrs. Samuel Morse Lane lived at No. 6 in 1958 when their daughter, Pamela, made her social debut; while Mr. and Mrs. John Drayton Depew made their home at No. 16 in addition to a home in Rye, New York. Alfred Lunt and Lynn Fontanne lived here, as did the Duchesse de Richelieu and renowned educator and early feminist, Mrs. Millicent McIntosh.


Tragically, eight of the houses were razed in the 1940s to make way for a high rise apartment building. The surviving 24, however, are amazingly intact with very little alteration and an astounding state of preservation and maintenance. 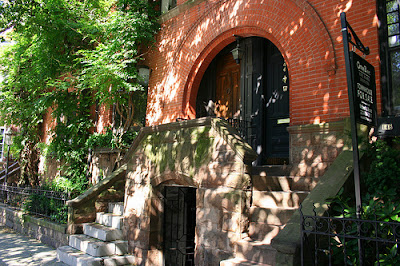 One of the most charming hidden corners of Manhattan, Henderson Place was designated a New York City Landmark in 1969. At that time the New York City Landmarks Commission called the street “an exceptionally attractive group of houses with individual front yard plantings and trees” and “they have remarkable charm and dignity for houses which were built for ‘persons of moderate means.’”
Posted by Tom Miller at 3:19 AM