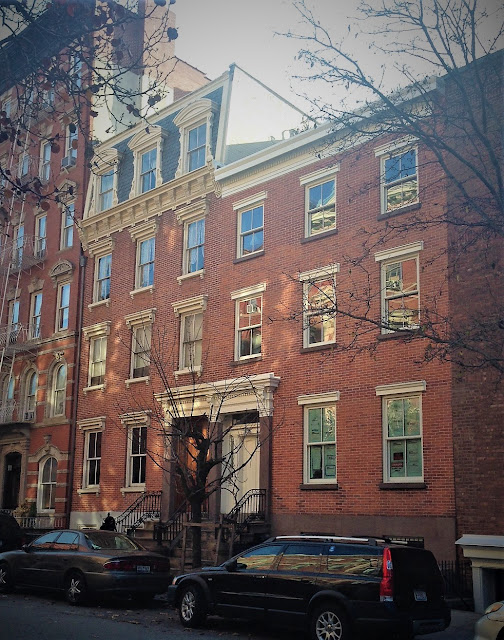 As early as the 1820s Richmond Hill, once the country estate of British officer Major Mortier and then Aaron Burr, was being developed John Jacob Astor.   In the early 1840s fine brick-faced homes rose along the block of King Street, between Sixth Avenue and Varick Street.  Among these were Nos. 32 and 34, two upscale, mirror-image residences.

At 25-feet wide and three stories tall above and English basement, they were intended for well-to-do families.  Their connected brownstone stoops were separated by handsome ironwork which terminated in three basket newels which sat on substantial stone drums.


The properties sat on land owned by Trinity Church.  By the mid-1850s No. 32 was home to real estate operator J. B. Archer.  He coupled domestic life with business in March 1855 when he advertised a house for rent at No. 564 Broome Street.  While he offered to show the property between 11:00 and 5:00, the ad noted "for particulars" he could be seen at home after 6:00 p.m.

Archer was apparently already renting rooms in the King Street house at the time.  Samuel Phillips, his wife and his brother lived here that year.

Victorian Fourth of July celebrations were dangerous to anyone who ventured outside because young boys traditionally fired pistols into the air.  It was a situation that continued until outraged reformers demanded an end to the reckless practice in the early 20th century.   On Independence Day 1855 the Phillips family felt safe in the backyard of No. 32.  But they were not.

The following morning The New York Times reported "Mrs. Phillips, wife of Samuel Phillips, residing at No 32 King-street, while setting at the back stoop of her house, was shot through the thigh with a ball from a pistol or a gun discharged from the rear of the house No. 19 Charlton-street."   Her brother-in-law rushed to her aid and was nearly injured as well.  "At the same time the brother of Mr. Phillips had a narrow escape; a ball passed through his pantaloons and lodged in the ground."

Less than a year later the Phillips family had moved on and on March 25, 1856 Archer advertised "A gentleman and wife, and two single gentlemen, can be accommodated with board, and furnished or unfurnished rooms in a private family; children no objection."

In the meantime, William Clark leased the house next door.  He was the son of Revolutionary War hero Captain Peter Clark who, according to the Therapeutic Gazette in 1884, "was with Stark at Bennington, and also at the surrender of [General John] Burgoyne."  Clark could trace his American lineage to Hugh Clark, who who settled in Massachusetts in the 17th century.

Clark owned an "oyster saloon" at No. 484 Third Avenue, at the corner of 35th Street.  Also known as oyster bars, the highly popular restaurant-taverns specialized in serving oysters buffet-style.  Clark's business was highly successful and provided him a satisfying personal fortune.

His affluence was evidenced when he became a victim of a brash crime in the fall of 1859.  While he was walking along West Broadway, a nimble-fingered sneak thief robbed him of his gold watch and chain, valued at $75--more than $2,000 in today's dollars.    The crook was not all that adept, however, and did not get far.  On November 21 The New York Herald announced "An Alleged Pickpocket in Trouble" and reported "William Curtis, a West India negro, was charged before Justice Connolly" and held for trial.

Like their neighbors, the Clarks were renting rooms by 1861.  That year, on August 30, an advertisement offered "To let, in a private house, two neatly furnished front Rooms, suitable for two young gentlemen or a gentleman and wife, and where home comforts can be enjoyed; house has all the modern improvements, and is convenient to cars and stages."   The "cars" referred to were the Sixth Avenue street cars.

Clark was looking for an employee for his business early in 1864, and was willing to interview in his King Street house.  He advertised on March 16 "Wanted --A girl in an oyster saloon; one who understands cooking oysters or waiting on tables.  Apply at 484 3d av., corner of 35th st, or 34 King st."

Eight months later Clark was dead.  He died in the house on November 15 at just 48 year old.  His funeral was held in the parlor three days later at 1:00.

The Clark family continued to rent rooms and among the boarders in 1865 were Andrew L. and Eliza Osborn and their teen aged daughter Mary Elizabeth; and a piano teacher who advertised "an accomplished young lady would like to teach music to a few scholars at their residences."

Less than a year after William Clark's funeral, the house would be the scene of another.  On September 5, after being sick for only a few days, Mary Elizabeth Osborn died just two months short of her 20th birthday.

In March 1866 the Trinity Church offered No. 34 for sale, saying it "contains all modern improvements."  The new owners continued to operate it as a boarding house.  When they advertised for a "girl to do general housework" in December 1868, they added "American or German preferred."

By now the boarders in the once-upscale home included blue collar immigrants.  One was Michael Gorman who lived here in 1869.  A native of Ireland, his profession was listed simply as "laborer."  In May 1869 he suffered a severe fall, most likely at a construction site.   His skull was fractured and he was taken to Bellevue Hospital where he lingered for several days before dying on May 9.  The next day The New York Times reported "Coroner Keenan granted permission for the removal of the remains to the late residence of the deceased, where an inquest will be held to-day."

Both residences continued to be boarding houses in the mid-1870s.  When the lease of No. 32 was offered in February 20, 1876 it was described a "three story high stoop House; contains all the modern improvements."   John Strobel signed the lease to operate the boarding house.

The owners next door moved away the following year.  On February 24, 1877 an advertisement appeared in The New York Herald that read "A rare chance for a newly married couple.  On account of leaving the city I will sell my entire Household Furniture for $300; this needs to be seen to be appreciated."

The buyers would soon be faced with a serious decision.  In 1878 John Strobel transferred his lease of No. 32 to Ferdinand Ehrhard.   The owner of an East Side plumbing business, he lived at No. 232 East 15th Street, and was active in politics.  The same year he took over the lease of No. 32 King Street he was elected to be a delegate to the State Convention of New-York Republicans in Saratoga, New York.

It was almost assuredly Ehrhart who was responsible for updating the house.  It received a stylish facelift, including the addition of a fourth floor in the form of a fashionable mansard roof.  But the shared stoops and entrance elements most certainly resulted in serious discussions with the owners of No. 34.  An obvious compromise resulted with both parties making concessions.

The sills and lintels of No. 32 received a modern, Eastlake-style update.  A new entrance with double doors in the same style replaced the Greek Revival original.   The owners of No. 34 did not agree to remodel those elements and apparently insisted on keeping the vintage stoop ironwork.  A trade-off was the Eastlake remodel of the entablature that stretched across both entrances. 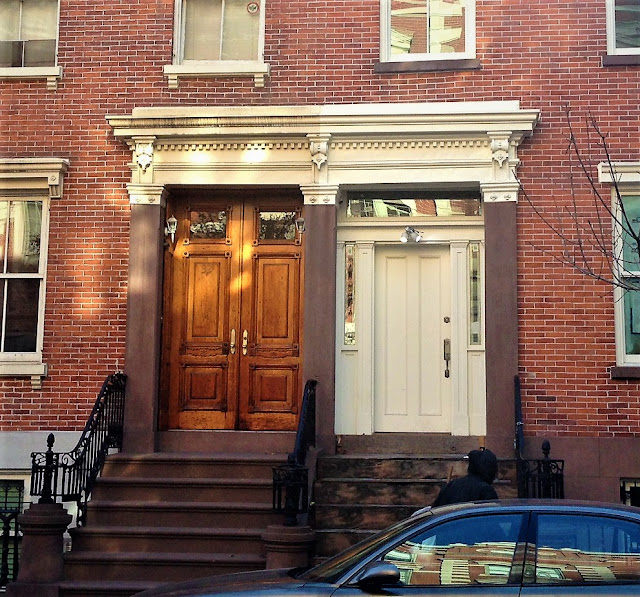 A notable resident of No. 32 at the turn of the century was builder John F. Walsh, Jr.  In 1901 he was appointed Superintendent of Buildings for the boroughs of Manhattan an the Bronx.  The position came with a $5,000 a year salary--almost $138,000 today.  Living with him here was his father, who was no less well known.


John F. Walsh, Sr. had been appointed by then governor Grover Cleveland as New York's Harbor Master.  Now, despite his advanced age, he was Inspector of Hulls in the Steamboat Service.  He died in the King Street house on July 5, 1905 at the age of 84, and still holding that job.  In reporting on his death The New York Times called him "one of the oldest an best-known residents of old Greenwich Village."

At the time of Walsh's death, the King Street neighborhood was becoming home, for the most part, to Italian immigrant families.  Three months before his funeral, another was held in the house next door.   Francis and Maddalena Cavagnaro's nine year old son, Arthur, died after being sick just five days.  His funeral was held in No. 34 King Street on April 6.


Ferdinand Ehrst's daughter, Louisa, was married to John Kreuser.   Following Ehrst's death, his estate transferred the lease of No. 34 in October 1908 to Kreuser.   Like Ehrst, he would be an off-site landlord; he and Louisa lived in Mount Vernon, New York.

Somewhat surprisingly, nine months later the Record & Guide reported that "The Rector, etc. of Trinity Church" had sold the house to John Kreusser for $15,000 (just under $390,000 today).   Among the Kreusser's upgrades was the installation of plumbing in 1916.


Throughout the rest of the century both houses contained rented rooms.  In the 1960s the basement of No. 32 was home to theatrical production manager Jose Vega and his wife, Vicky.   In the 1840s the below-ground space held the kitchen and laundry areas as well as the family dining room.  Now in 1965 the Vegas' $168 per month rent provided them with vintage pine floors, three fireplaces, "refinished old wainscoting in the kitchen," and a built-in bar, as described by Lawrence O'Kane in The New York Times that year.

But $168 a month rents in vintage homes do not last forever in Manhattan.  In 2000 a renovation of No. 32 resulted in one apartment per floor in the basement through second floors; with a duplex on the third and fourth.   In 2013 plans were filed to reconvert No. 34 to a single family home. 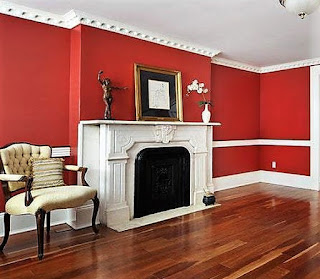 Although the Landmarks Preservation Commissions neighborhood designation report laments that the 1870s updating of No. 32 "upsets the relationship" of the two houses; the pair is nonetheless charming and reminds us that changes in architectural taste forever evolve.

photographs by the author
Posted by Tom Miller at 1:55 AM