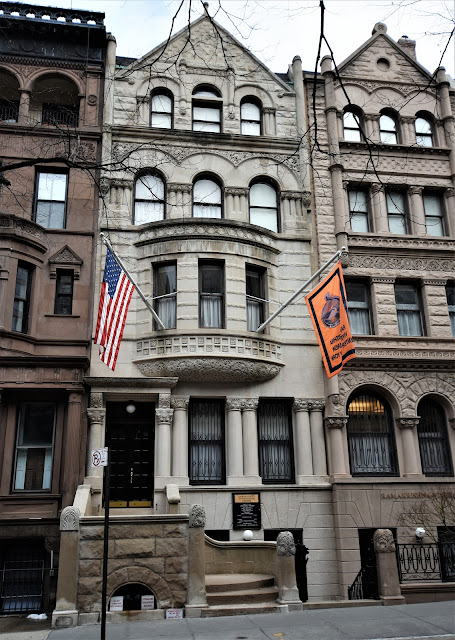 Acting as their own developers, Robert N. Cleverdon and Joseph Putzel almost single-handedly transformed the northern blockfront of East 94th Street between Fifth and Madison Avenues in 1892.  That year they started construction on two rows of upscale residences--one group of five, the other of six.  Plans projected the building costs to be $20,000 each; more than half a million dollars today.

The more easterly row, Nos. 15 through 25, were designed in an A-B-C-C-B-A pattern.  The "B" houses, Nos. 17 and 23, were a profusion of shapes and textures.  Stone carvers would have spent months on the intricate Romanesque Revival decorations--the stubby capitals of the sweeping dog-legged stoop and of the engaged columns of the parlor floor, the exquisite basket-weave cornice above the entrance, the tangle of leaves and knots in the base of the second story bay, and the lavish spandrel above the third floor openings, for instance.

Cleverdon & Putzel gave the stonework of each story a different treatment--rusticated at the basement level, planar at the parlor, banded at the second, overall-carved at the third and rough-cut at the fourth.  The contrast of colors and materials added to the shapes and forms to create a vibrant facade.  The architects gave a brief concession to the newly-popular Queen Anne style with an alternating checkerboard pattern of terra cotta floral tiles and blind spaces below the second story bay.

Construction was completed in 1894 and No. 17 was purchased by Wendolin J. Nauss, president of Nauss Brothers Co., provision merchants.  With him in the firm were Frederic, Charles and Adam Nauss.  Like many other merchants and manufacturers at the time, Nauss invested heavily in real estate.  He built and maintained tenement houses and commercial buildings.


The 45-year old and his wife, Anna, had six children, Wendolin, Jr., Edward, Anna, Frederick, Charles, and Florence.  Their summer home was in Larchmont, New York and it was there, in June 1905 that the couple hosted a dinner to announce the engagement of their youngest daughter, Anna Louise, to Frederick Porter Smitley of Pittsburgh.

By 1918 Wendolin and Anna lived alone in the house with their staff.  The sons by now had been taken into the family business, as had Florence's husband, Henry J. Hildebrandt.  Wendolin died that year, leaving an estate of $966,990--or more than $15 million today.

It became home to Herbert J. Stursberg, and his wife, the former Marie Louise Vietor.  A 1912 graduate of Yale, Stursberg had served in Squadron A, one of the Army's "aero squadrons" during the war.  Their country home, Cranbury Farm, was Norwalk, Connecticut.


In 1933 Swami Nikhilananda founded the Ramakrishna-Vivekananda Center--the New York City branch of the Ramakrishna Order of India.  It is based on the System of Vendanta, a form of Hinduism established in the 19th century and demonstrated by Sri Ramakrishna.

The Stursbergs sold the 94th Street house to the Center in 1939.  In reporting the sale, The New York Times described the group as a "Hindu cultist organization."  The article noted that it would move into the mansion "upon completion of extensive alterations."  The top three stories remained a single family house, while the basement and parlor level were converted to that Department of Buildings documents termed a "chapel."

As it does today, the Center provided services and classes, as well as guest speakers.  Swami Nikhilananda, whose name translates loosely as Brother Felicity, spoke frankly to the press about his thoughts on Communism upon his return from India in June 1949.  He told reporters "Communism never will succeed in India."  The Times reported that during his five-month trip, "he conferred with Pandit Jawaharlal Nehru and other Government officials and 'did not hear a single word from anybody about wanting Communism.'"

The purpose of the Swami's press conference was less political than humanitarian.  He stressed that because of the "chaos and Communism in the Far East," Indians were not getting sufficient food.  The importing of rice into the country had been halted and he called for "downright American aid."

Lectures in the Center were not limited to Hindu topics.  In November 1950, for instance, Japanese author D. T. Suzuki spoke on "Buddhist Mysticism."

The Center drew followers from all economic, political and social areas.  Author J. D. Salinger accepted the Swami as his spiritual teacher, and regularly attended the classes and services from around 1960 until his death in 2010.

German-born artist Max Beckmann and his second wife, Mathilda von Kaulbach, better known as Quappi, became members in the early 1950s.  According to Beckmann's biographer, Sabine Rewald in her 2016 Max Beckmann in New York, Swami Nikhilananda was highly influential in Quappi's life and "became for her an anchor." 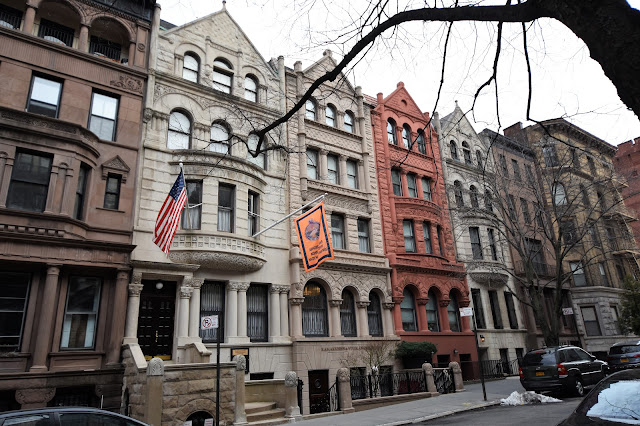 Around 2005 the Center expanded into the house next door at No. 19.  Of all the other houses in the row, only the Nauss residence retains its stoop.  A regrettable coat of gray paint obliterates Cleverdon & Putzel's purposeful contrast of colors and materials; but their delightful design remains otherwise untouched,