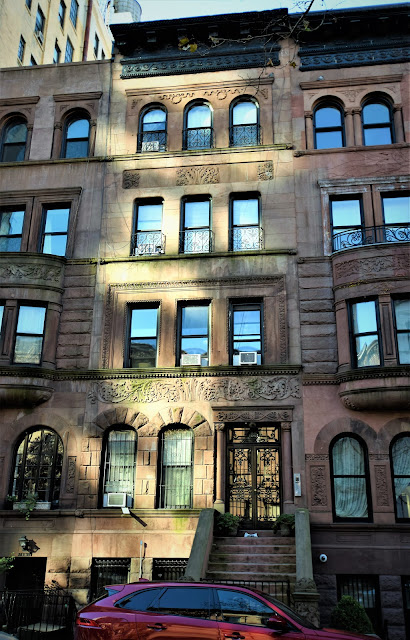 In 1892 developer Walter Reid started construction on a row of upscale homes stretching from No. 14 through 24 East 93rd Street.  He did not have to look far to find his architect.  The residences were designed by his son, Walter Reid, Jr.

Completed the following year, the Romanesque Revival row was deftly designed to include the expected beefy elements of the style--like rough cut stone and fortress-worthy arches--tempered with delicate carvings and decorations.  Although each of the houses was slightly different; Reid left no question that this was a unified row.

His treatment of No. 22 was unusual.  The planar walls of the upper floors created an unusually finished look for the Romanesque style; in stark contrast to the parlor level.  The windows of the second floor were grouped within a carved picture frame-type molding, more expected in commercial buildings.  And the sparse decoration of the third floor gave the impression that something was missing.

In the meantime Edward Rubin had been building an appreciable personal fortune.  He and his wife, the former Celia Cohen, were married in their native Russia.  After arriving in New York City, Rubin went into the fur business, eventually forming the Edward Rubin & Co., makers of "fur garments and novelties."  Around the turn of the century the young couple moved into No. 22 East 93rd Street.


Edward was 28 and Celia just 23 when son Harold was born on October 13, 1900.  The family would eventually grow to nine, with three more sons, Edwin, Milton, and Arthur, and daughters Bertha, Miriam, and Rita.

Russia was the source of many of the sought-after pelts for turn-of-the-century fashions, including the "Crown" sable worn by the tsar.   The early training Rubin received in his homeland made his business a success.

In November 1903 Cloaks and Furs gushed "Edward Rubin & Co., the furriers...have on hand one of the most complete lines of scarfs, boas, clusters, neckpieces, pelerines, etc., that the writer has been seen anywhere.  The fur pieces are all in the most fashionable furs, and at the most moderate prices.  Such a handsome outlay is rarely seen in a furrier's showrooms.  Throughout the whole stock there is a richness of tone that bespeaks volumes for Mr. Rubin as a judge of furs."

But two years later Rubin made a bold move by stepping out of his comfort zone and founding the American Silk Mills, Inc. with factories in Paterson, New Jersey.   Before long his fur business would be dissolved as he focused entirely on silk production.   The change turned out to be both wise and significantly profitable.

He added to his fortune by dabbling in Upper West Side real estate.  It resulted in his diversifying again, in 1911, when he formed the Nibur Realty Company, Inc. with his brother, Jacob and another investor.

The family rarely entertained and their names never appeared in mainstream society columns.  Only events like the announcement of Harold's bar mitzvah in October 1913 and the subsequent "at home" for receiving well-wishers made the newspapers.

Instead Edward Rubin focused on religious and charitable causes.  He supported several philanthropic organizations, most notably Beth Israel Hospital which counted him among its major benefactors for decades.

During the Depression years, heart problems caused Rubin to spend less time at the office.  Son Milton took over much of the management of the American Silk Mills, Inc.  Rubin fell into a comfortable habit of receiving his breakfast and newspaper each morning in his bedroom--delivered conveniently by a dumbwaiter from the kitchen.  It was a custom that resulted in a highly bizarre accident on September 28, 1939.

Around 8:00 that morning servants were stunned when the 64-year old plunged headfirst down the dumbwaiter shaft from his second story bedroom, landing in the basement.   He suffered a possible fractured skull and internal injuries.

A full-grown man getting his body into the shaft far enough to fall seems highly difficult, if not nearly impossible.  Yet Milton explained "that his father apparently became dizzy when he leaned into the shaft to get his morning newspaper and breakfast," reported The New York Times.  That, too, seemed unlikely, since the dumbwaiter, still empty, was at the bottom of the shaft at the time.

Nevertheless, the police deemed the fall an accident.  Rubin was taken to Mount Sinai Hospital by private ambulance.   He died there five days later.


The following year Rubin's children sold the family house of more than three decades to the 22 East Ninety-third Street Company.  While the details were kept quiet, the firm's $20,000 mortgage (in the neighborhood of $330,000 today) hinted at the sale price.

The new owner had no intentions of leasing No. 22 as a private home.  Within the year renovations were completed that resulted in two apartments and "two furnished rooms" per floor.

Among the tenants in the 1960s was gold dealer Elizabeth Meiler, whose shop was in the Diamond District, at No. 10 West 47th Street.   She found herself unexpectedly pulled into a murder investigation in the summer of 1963.

Jeweler Antonin Eisler also had a store at the 47th Street address and on Friday July 26 Elizabeth happened to notice him having lunch with a "young brunette" in a restaurant in the building.   Late that night, at around 11:00, Eisler's wife reported him missing.

Three days later his mutilated body was found face down at the base of a steep embankment in Alpine, New Jersey.  He had been shot twice through the heart at close range, prompting detectives to suspect a professional hit.  The New York Times reported "An odd aspect of the mystery was that the entire face of the victim had turned black, but not the rest of the body."

Eisler had left his 47th Street shop with $156,000 in gems, which were missing.  Although she was not considered in anyway connected to the crime, the police were still questioning Elizabeth Meiler and other friends and associated into the night three days later.

Although the exterior of the Rubin house survives essentially unchanged; there is nothing left of Walter Reid's 1893 interiors.  Exposed brick and flat drywall replace the Victorian details so familiar to Celia Rubin.  And one assumes that the dumbwaiter that resulted in her husband's death is gone as well.