In 1928 the Young Men's Christian Association had significantly evolved since its first New York branch was organized in 1852.  Its organizers had been concerned with "improving the spiritual condition of young men," and focused greatly on teaching trades within a significantly religious environment.

Now, more than seven decades, later, the organization still sought to keep boys off the streets by providing wholesome activities, and still offered vocational classes.  The atmosphere, however, was now more club-like; without the rigid oversight of the Victorian reformers of generations earlier.

In 1928 the Y.M.C.A. broke ground for a new facility which was pronounced would be "the largest in the United States."  The sprawling site replaced old rowhouses at Nos. 3 through 11 West 63rd Street, and 8 through 12 West 64th Street.   The organization had commissioned 42-year old architect Dwight James Baum to design the structure.  The only high-rise building he would design, it would rise 14 stories.

Baum married historic Italian Renaissance and Romanesque styles to produce a structure mostly romantic and partly forbidding.  The 63rd Street elevation was plucked from Lombard Tuscany; the 64th from Florence,  On both Baum included brick balconies supported by deep corbels.  The front of the building, on 63rd Street, rose from its limestone base to a riot of setbacks, angles and towers,


The symmetrical 64th Street elevation, looking much like a Venetian palace, was more reserved but no less striking.  Here three sets of grouped, leaded windows sat within pointed arches, while just above six projecting gargoyles with medieval human faces projected far from the facade.


Baum used variegated brick ("shading from brown and red to pastel shades of gray, lavender and purple," according to The New York Times), which he highlighted with vivid terra cotta decoration.  Elaborate window surrounds and entranceways were executed in colorful terra cotta.  In most instances, the motifs echoed medieval decorative elements--figures that smacked of cathedral saints, a stunning medallion of St. George slaying the dragon, and full figured lions, for example.  But included in the 64th Street entrance were very modern characters sculpted by artist Thomas Hudson Jones; symbols of the activities in which the boys here would engage. 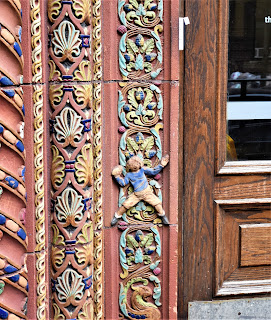 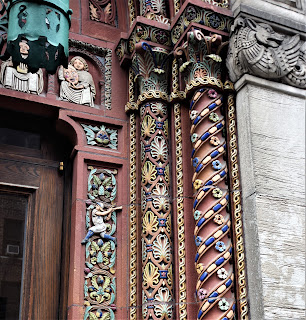 The expert workmanship required in constructing the building was not overlooked.  In September 1929 ten workers were awarded certificates and gold buttons by the New York Building Congress as "awards for craftsmanship."  In reporting on the ceremony, The New York Times remarked that the building was nearing completion; adding "Its thirteen stories and penthouse provide 600 bedrooms, two swimming pools, three gymnasiums, a theatre, library classrooms and laboratories."


Completed in March 1930, the building cost $3.25 million--more than $47.6 million today.  In providing activities for 14,000 members, it included a staggering range of venues.   The largest of the three gymnasiums was 90 feet long and 60 feet wide with space for spectators.  An indoor running track, boxing and wrestling rooms, six handball courts, and a Turkish bath with "sun ray equipment," were included in the physical education areas.


The Times reported "The larger of the two swimming pools, 90 feet long, is said to be the first in America in which Pompeian tile is used in the walls.  It is surrounded by a gallery and is deep enough for safety in high diving.  The smaller pool is 75 feet long, decorated in figured blue Spanish tiling. Both have blue plaster ceilings with a star effect."

The West Side Y.M.C.A. was more than just athletics.  There were more than 20 "entertainment and activities rooms," classrooms and a theater.  While Baum had treated most of the rooms in the Italian style of the exterior; he added what The Times called "several novel rooms."  And novel they were.  There was a Totem Room, which housed a large native totem pole brought from Alaska; a forge room, a log cabin room, a "pirate ship's cabin," and even more unexpectedly, a "farm house attic." 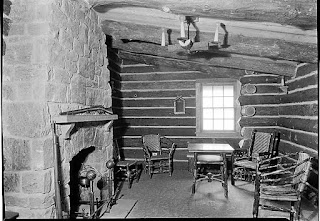 The West Side Y.M.C.A. had hardly settled in before plans were laid for a Trade and Technical School of the Education Department, which was currently being operated from rented space.  Dwight James Baum was recalled to design the architecturally-harmonious structure.  The New York Times reported it would be "in fifteenth century Lombardy style to match the West Side branch."

The $375,000 building (including the land and furnishings) was completed in September 1931.  Here boys would be trained in technologically up-to-the-minute trades.  The organization announced that "among the courses to be offered will be radio mechanics, television, automobile mechanics, motion picture and sound projection, architectural and mechanical drawing and electrical work." 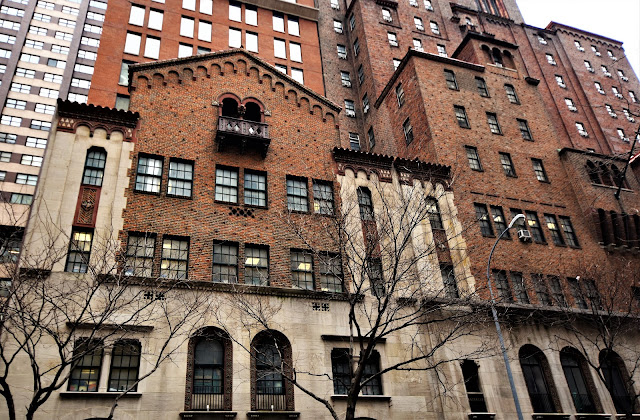 While boys and men came and went taking advantage of the many activities, the theater space was sometimes used by other groups.  Such was the case on December 21, 1931 when the Allied Forces for Prohibition held a meeting here.  Composed mostly of clergymen, the group's goal was to obtain "pledges from citizens to support only dry candidates" in the following year's elections. 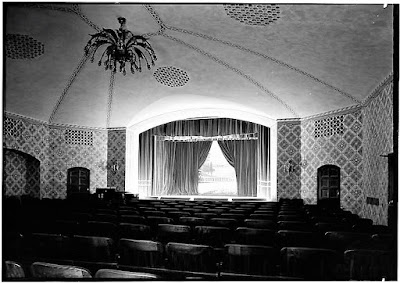 Much more surprising was the Nisei Job Conference held here on September 13, 1941.  Sponsored by two Japanese organizations, the Tozai Club and the Japanese Students Christian Association, the conference addressed the problem of anti-Japanese sentiment which had resulted in many Japanese-Americans being unemployed.   The San Francisco Japanese American News reported that "it was stressed that a long-range program for nisei employment is expected to be formulated at the meeting."

Less than three months later, on December 7, Japan's attack on Pearl Harbor put a end to the  Conference's hopes. 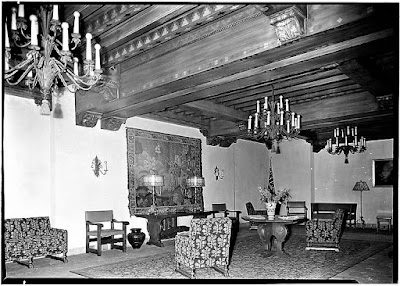 That event sparked the United States' entry into the war and left the American factory workforce significantly depleted.   The Westside Y.M.C.A. responded by announcing on October 3, 1942 "A special automobile mechanics course for women will be offered this month...The course has been scheduled at the request of many women who want to offer their services to aid in the war." 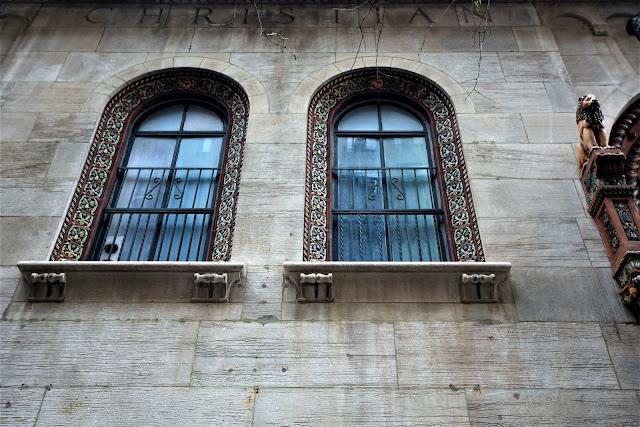 Following the war things returned to normal at the Westside Y.M.C.A.  It was frequently the scene of outside sports competitions.  On November 28, 1951, for instance, the Columbia Spectator announced that the Columbia Varsity fencers would face off with the Saltus Fencing Club here the next day.

Perhaps the first athlete trained here to gain international attention was gymnast John Pesha.  When the Illinois newspaper the Daily Illini listed the 1960 United States Olympic gymnastic team on February 13, 1959, Pesha's was among the six names.  The newspaper described him as "a former junior all-around champ from New York's Westside YMCA."

In 1986 the Trade and Technical School moved out of the 63rd Street building.  Following the construction of Lincoln Center nearby, the property values in the immediate neighborhood prompted the YMCA to merge the school with the Baldwin School and relocate.  The sale of the former school property resulted in its later being converted to apartments.

In the meantime the Westside YMCA continued to offer extensive programs to its members and visitors.  Today exercise classes are offered to both men and women which would puzzle and astound the members of 1930.  Included are instruction in belly dancing, spinning, yoga and karate. 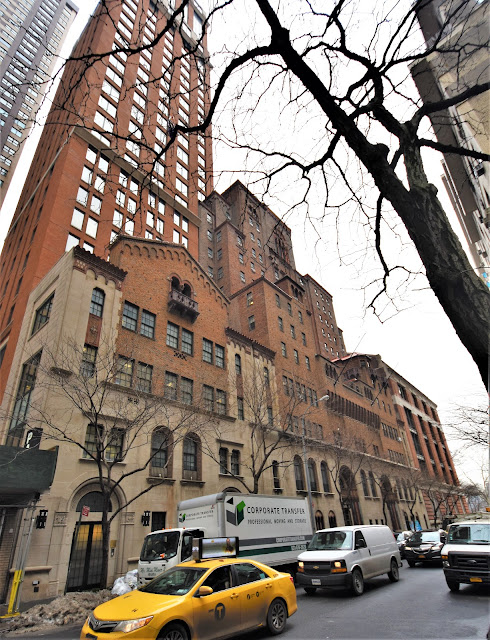 Dwight James Baum's exotic Italian complex is an Upper West Side treasure; and its fanciful, delightful terra cotta ornamentation is a visual feast.