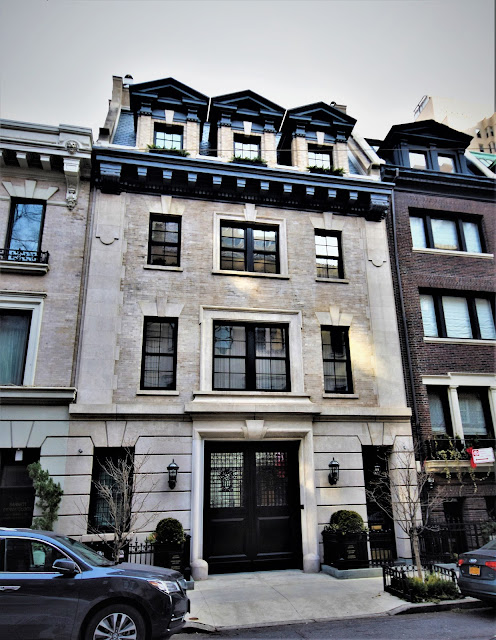 On the night of April 6, 1899 a gas line exploded in the brownstone house at No. 4 East 67th Street.   The blaze that followed resulted in multiple deaths and the complete gutting of what the Evening Times of Washington, DC called "this magnificent palace."

The following year, in October, banker Henri B. Wertheim and his wife, Clara, purchased the ruins and set architect John H. Duncan to work designing a five-story mansion on the site.  Steps away from Fifth Avenue and Central Park, it would be a showplace.

As the house rose, Wertheim turned his attention to a private stable nearby.   Also in the market for a carriage house was broker Julius Semon Bache, who lived a few houses away from the Wertheim site at No. 10 East 67th Street.  Bache's mansion had recently been remodeled by architect C. P. H. Gilbert   It appears the two millionaires now worked together on their stables projects.

On the same day, November 27, 1901, Charles Armbrecht sold the two three-story brownstone houses at Nos, 165 and 167 East 70th Street to Wertheim, and stable at No. 163 to Bache.   The location, between Lexington and Third Avenues, was conveniently close, yet far enough away not to sully their immediate neighborhood.  Both men commissioned C. P. H. Gilbert to design their handsome carriage houses.

Gilbert filed plans for both buildings on January 10, 1902.  The cost of Wertheim's 33-foot wide brick and stone structure was projected at $26,000--just over $715,000 today.   Four stories tall, the upper floors contained residential space for Wertheim's more important stable employees--his coachman's family, for example.   While a free apartment was a perk of sorts, it was also a concession to the employer.  By having their carriage drivers living above the stable Wertheim and other millionaires were assured that they were on call 24-hours.

The rusticated stone base included the centered carriage bay, flanked by an entrance and a window of matching proportions.  The two floors above were faced in buff-colored brick and trimmed in limestone.  The top floor took the shape of slate-shingled mansard faced with muscular stone dormers.

The operation of a private stable like this one required a large staff--stable boys who changed the hay and cleaned the stalls, grooms who bathed, fed and otherwise maintained the horses, and workers who cleaned and repaired the many vehicles.  The Wertheim carriage house would have been a bustling hive of activity.

Clara Wertheim died in childbirth in 1903.  Two years later, in April 1905, Henry remarried.  His bride, Gladys, was the daughter of the massively-wealthy investment banker Henry Seligman.  Little by little the newlyweds spent more time in Paris and less in New York.  Finally in 1911 Wertheim leased his mansion to Frederick Lewisohn.

Werthein soon sold his carriage house  to another millionaire banker, Otto Kahn, who lived at No. 8 East 68th Street.  (Kahn's wife was the sister of Clara Wertheim.)   But when Kahn began construction of his lavish Italian palazzo on the corner of Fifth Avenue and 91st Street, the East 70th Street carriage house would soon become inconveniently remote.

By February 1915, when Kahn leased the building to William L. Strauss, motorcars were quickly supplanting horse-drawn vehicles as the preferred mode of transportation.  In reporting on the lease the Real Estate Record & Builders' Guide described it as a "private garage."

Otto Kahn was, no doubt, displeased with the unfortunate press Strauss brought to his property.  It started on Independence Day that year when Strauss's chauffeur, Archie Senate, plowed down a traffic policeman in Far Rockaway.  The New York Times reported that Officer Washington Hegeman "was cut severely on the face and hip" and after being attended to by at doctor at the station house, was "later removed to his home."

But that was nothing compared to the scandal that was exposed four months later.  Strauss had been placing advertisements like the one that appeared in The Telegram which read in part:

At 165 East 70th, near Lexington, an opportunity presents itself to the private individual that never did before or ever will again.  This is a case of compulsion.  I, the owner, will sell the contents of my private garage, not stopping to think of the cost.

Strauss went on to describe limousines and touring cars "in A1 condition," including a "beautiful seven passenger Lewis," a "six cylinder Stevens-Duryea, used one season," and a "beautiful late model Cadillac" which would be "sacrificed" at $650 (more than $750,000 today).

The problem was, of course, that his was no "private garage" and these were not the vehicles of an owner who found himself in financial straits.  Every few days a new advertisement would appear, offering similar sacrifices.

The New-York Tribune exposed him, saying "Mr. Strauss's 'private garage' is about as private as Brooklyn Bridge."  Saying, parenthetically that "Mr. Strauss's English is a matter between him the 'The Telegram,'" the newspaper accused "it is fairly typical of the hoax-garage 'bargain.'"

Not surprisingly, Strauss's lease was not renewed and the following August The Times reported that "Otto H. Kahn has leased his large garage...to George H. Shaffer."

It appears, however, that Kahn already had intentions to dispose of the property.  On July 6, 1917 architects Walker & Gillette filed plans "for alterations to the garage and chauffeur's quarters" for the millionaire.  The remodeling, no doubt, would transform the carriage house to a proper, modern garage.  It was no small undertaking, with the costs equaling nearly $76,500 today.

In January 1920 Otto Kahn sold the garage to multi-millionaire Stephen Carlton Clark for about $80,000.   Clark was the son of Alfred Corning Clark.  His grandfather, Edward C. Clark, had amassed a fortune as the partner of Isaac Merritt Singer in the Singer Sewing Machine Company and had heavily invested in Manhattan real estate.

Clark had recently completed what the Record & Guide described as his "handsome residence" at the southwest corner of Park Avenue and 70th Street.   By now he was the owner and publisher of three Albany, New York newspapers.  But he was far more recognized for his valuable art collection and his generous philanthropies, notably in Cooperstown, New York where his family's country estates were located.

It was there, for instance, that he founded the Baseball Hall of Fame and paid for the construction of its building, completed in 1939.  He donated the family mansion, Fernleigh, once the home of James Fenimore Cooper, to the New York State Historical Association.  (It is now known as the Fenimore Art Museum.)

Clark commissioned architect Otto Semsch to update the garage.  The renovations still included chauffeur's quarters in the upper floors.  There was now space for 12 vehicles, a clear statement of Clark's wealth.

As the expansive carriage houses and garages of the early 20th century were razed or converted to residences, No. 165 stubbornly remained a private garage.  It was purchased by banking heir Paul Mellon and his wife, Bunny, after they constructed their 14-room townhouse nearby at No. 125 East 70th Street in 1965.

Mellon died in 1999, but Bunny continued living in the mansion and using the former carriage house as a garage, while reportedly storing furniture on the upper levels.  At the age of 99, she sold No. 165 to Morgan Stanley CEO John Mack and his wife, Christy, in August 2009.  At the time it was described as being in "distressed condition."  The couple paid $13.5 million for the property. 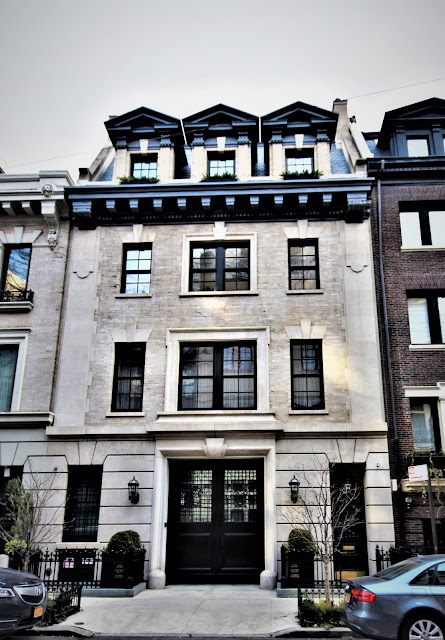 Interestingly, the Macks continued to live in their nine-room Lenox Hill penthouse.  It was not until about 2012 that they began converting the carriage house to a single-family residence.  The result was a 20-room mansion with 10,000 square feet of living space.