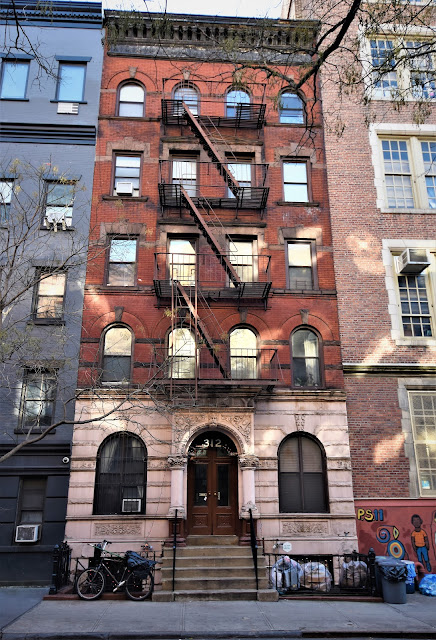 By the end of the Civil War the block of West 21st Street, between Eighth and Ninth Avenue, had filled with brick- and, in a few cases, brownstone-faced homes.   The owner of No. 312 suffered a personal tragedy in 1868, causing his servants to look for other work.  An advertisement in The New York Herald on June 23 read "Wanted--By a respectable colored man, a situation as coachman and groom; leaving on account of a death in the family and selling out; best city reference."

But by the end of the 1890s change had come to the block.  Apartment buildings were replacing many of the private homes.  Mary E. Kelly, who lived nearby, had been involved in real estate wheelings and dealings for about a decade.  She purchased No. 312 in 1892 and laid plans to replace it with a modern flat structure.

She commissioned the newly-formed architectural firm of Neville & Bagge to design the building.  Thomas P. Neville and George A. Bagge had gone into partnership that year.  The architects tossed historic purity aside in favor of eye-catching design; setting the stage for their many commissions to come..

Mary E. Kelly, like so many of the developers on the Upper West Side were doing, gave her project a name, The Reilly, most likely named after a close relative.   The completed building cost her in the neighborhood of $450,000 in today's dollars.  With just two apartments per floor, The Reilly was intended for middle-class residents.

The eclectic mix of styles married Romanesque Revival with neo-Grec, and added a splash of Renaissance Revival for good measure.  The stone first floor and basement levels alternated planar brownstone with rough cut banding.  Panels below the arched openings, a decorative band of palmettes, and leafy keystones kept carvers busy for months.


But most eye-catching at this level was the exuberant entrance atop the five-step stoop.  The chubby columns, sadly covered in pinkish paint today, may be polished granite.  Their elaborate and innovative capitals upheld an impressive arch, the spandrels of which were highly carved in Renaissance designs.  Romanesque Revival portrait keystones often portrayed pseudo-historic subjects like medieval warriors or gods.  But this one depicted a contemporary figure; suggesting the sitter may, in fact, be Reilly himself.  Chunky letters spelled out the building's name in the entablature directly above.

The second and fifth floors were pure Romanesque Revival, with arched openings, rough cut keystones and undressed stone banding.  Sandwiched between and separated by brick bandcourses, the third and fourth floors turned to neo-Grec; with dressed stone trim and flush geometric lintels that held hands by way of stone banding.  Most surprising was the central section which projected slightly (about the depth of a brick) and was unified by a shallow, classically-inspired triangular pediment--yet one more dip into the historic grab bag. 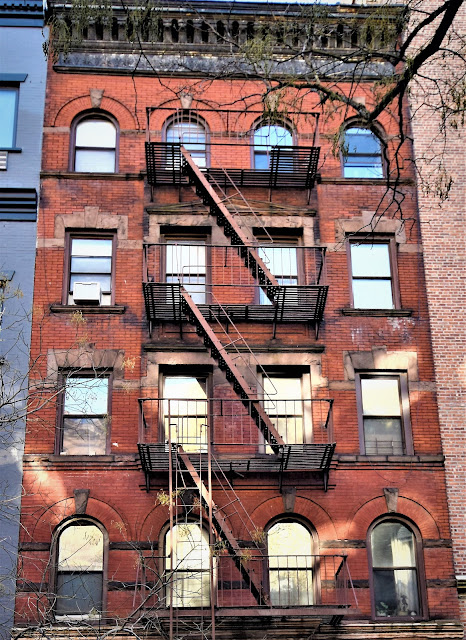 Among the first--and most colorful--residents was Fred Wilson (called a "versatile conversationalist) and his wife.  He had long been well-known in the minstrel circuit, entertaining music hall audiences.  So it was, perhaps, surprising decades earlier when President Abraham Lincoln chose him to be the United States Marshal for the American settlement at Shanghai in 1863.

Despite his Government post, Wilson did not give up his stage career.  Shanghai was a booming center of trade in munitions, provisions, tea, silk and opium and, therefore, was filled with Westerners.  Visiting troupes from American and European circuses--like George W. B. Lewis's Australian Hippodrome--came and went.  And Wilson took those opportunities to sing and perform.

He had arrived in Shanghai at a frightful time.  The Taiping Rebellion, a massive civil war in China, was still playing out.  His experiences in Shanghai and in the rebellion would add another page to his resume--author.

Now Wilson and his wife moved into The Reilly.  He had returned to the stage and in 1893 his celebrity was acknowledged when the management of the new Eldorado Amusement Park in Weehawken, New Jersey, included him in the list of theatrical luminaries invited to witness "the King Solomon spectacle from the vast amphitheatre" there, as reported in The New York Times on July 25.

The Times article noted "Knowing well themselves the value of applause, the actors were lavish in bestowing it and in manifesting heartily in every way their appreciation of the picturesque performance.  This naturally had its effect, and a more beautiful and more animated representation of the gorgeous spectacle than was presented last night has not been seen at Eldorado."

When war broke out between Japan and China in July 1894, Wilson read the newspaper accounts with understandable interest.   As reports came in that the Chinese were making "triumphant progress," as described by The Evening World on August 30, he balked; essentially calling them fake news, to use today's terms.

The World ran the headline "Doesn't Believe The News" and quoted Wilson as saying "I expect the Japanese to march upon and capture Pekin."  He scoffed at the Chinese military leadership, saying "Their own Mandarin officers will run as promptly and as hard as the commonest coolie trooper."  And referring to what newspapers called "China's formidable hordes of cavalry," he said "This is chiefly composed of men on mules and donkeys.  The cavalryman perches on a broad pad upon the donkey's back and is a ridiculous and almost helpless object."

Wilson did not hold back his obvious disdain for the Chinese fighters, calling the Japanese "high-spirited, courteous, grave and progressive men" and adding "one of them is good for a half dozen Chinamen."

In the meantime, Wilson's wife paid attention to matters closer to home.  While the couple's financial circumstances did not allow her to give munificently to charities, she apparently did her best.  In 1895 she donated "one package of picture cards and one blanket" to the New York Society for the Prevention of Cruelty to Children.

Another interesting resident at the time was Edward McPhillips who lived here with his wife and three children.  A Civil War veteran and former member of the Metropolitan Police, he had retired from the force in 1887 to take the post of associate detective in the upscale Fifth Avenue Hotel.  Three years later he was promoted to chief detective.  When the position of Head Porter became available, he resigned as chief detective and took that job.

While the position of Head Porter might initially seem a step down; in fact the close interaction with the wealthy businessmen, politicians and military bigwigs often resulted in generous tips.  The Times noted that "Mr. McPhillips was popular with the public, and enjoyed an extensive acquaintance with the prominent guests of the hotel."

McPhillips's wife prepared Thanksgiving dinner in 1895 and the holiday was celebrated quietly.   Then, not long after the meal was over McPhillips suffered a fatal heart attack.  On Sunday afternoon, Decmber 1 his funeral was held in his apartment.  Because he was an active Mason, was a member the Lafayette Post of the Grand Army of the Republic, and a former policeman, his was an impressive service.

The Reilly continued to be home to working class residents in the early years of the 20th century.  One was Peter Rooney, who was headed home from upstate on the Croton Local train on the afternoon of October 25 1903.  As it pulled into Grand Central Station around 5:15, the platform was packed.  Rooney decided not to wait for the train to come to a complete halt.

The New York Times reported "He was standing on the steps of the second car while the train was steaming into the station, and, according to a number of railroad employes, jumped from the train before it came to a full stop."  Rooney's foot slipped and he fell backwards between the cars.

Bystanders screamed to the engineer, but it was too late.  The newspaper wrote in unnecessarily vivid wording that he "was ground to pieces."  The article ended saying "Immediately following the killing of the man there was excitement and confusion in the depot.  Several women fainted, and had to be carried to the waiting room, while a number of men staggered from the station."

Most residents at the turn of the century were hard-working and respectable.  One, by the name of Kropp, was looking for work in October 1904.  Her ad in the New-York Tribune read "Cook--Protestant woman as good cook; city personal reference; no objection to the country."  (Her specifying that her references were "personal" rather than professional may hint that she was just starting out making her own money--perhaps because the death of her husband.)    Both a man named Delaney and his wife were out of work in 1909 when an ad read "Couple--Coachman and cook; first class; best references."

Peter Quinn was an ice delivery man during the Depression years.  Every week he and other drivers would exchange their weekly paychecks for cash at the Icemen's Welfare Association a block away from The Reilly at No. 469 West 21st Street.   He was there with nine others around 11 a.m. on October 16, 1930 when two gunmen rushed in.

They forced the guard, William Coscia, inside and ordered everyone into a rear room.   They promised that no one would be hurt if they kept quiet.  Apparently Peter Quinn did not believe them.  One of the thugs fired a shot into his left leg.

After stuffing all the cash from the office into their pockets, the robbers reemphasized their warning to keep quiet by firing two more shots.  One struck the wall and the other hit 22-year old John Pisapias in the leg.  They then fled towards Tenth Avenue and disappeared.

Quinn and the other injured man were taken to Bellevue Hospital where they recovered.  Their pay, however, was not.

Although the block was far from upscale throughout the 20th century, the residents of The Reilly remained law-abiding and respectable.   When the Greek Independence Day parade was held in 1941, celebrating that country's 100th year of independence, Irene Chalduris was one of three young women dressed as allied countries--the United States, Greece and Great Britain.  Irene was honored as the U.S.


Another Irene in the building, Irene Yankou, gave up her beloved pet dog Rocky for the war effort a few years later.  When the Government sought scout dogs to serve on the front lines as members of the Army K-9 Corps, Irene donated Rocky.   He and his comrades were trained to detect the presence of the enemy.  He was among the first War Dog Detachment to see service in the Southwest Pacific theater.  He went ashore with the first assault waves in the landing on Cape Gloucester, New Guinea.

Sadly, Rocky would not return to West 20th Street.  He was killed in action.  On February 5, 1945 Irene accepted his citation for outstanding performance of duty in the Southwest Pacific from Major General E. B. Gregory, Quartermaster General.


Today there are still just ten apartments in the building.  The stonework of the first floor has been heavily abused; yet the original doors and the delicate etched glass transom panels survive.  Easily overlooked, the architecturally eccentric building--one of the first works by Neville & Bagge--holds a deceptively fascinating history.