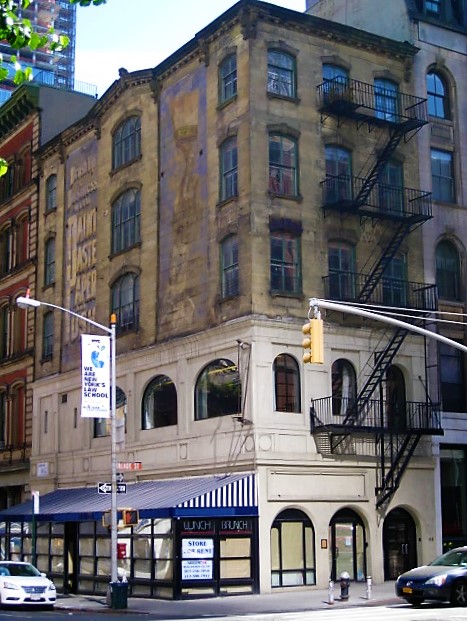 In January 1854 attorney Thatcher T. Payne initiated a petition pushing for "a sewer in West Broadway from Reade to Duane street."  Payne was well-respected among New York's professional class; but he was overshadowed by his rather amazing brother, who had died two years earlier.   John Howard Payne was an actor, poet, playwright, author, song writer (he was best known for his "Home, Sweet, Home"), and United States Consul to Tunis.  After living with the Cherokees for a time, he published accounts suggesting the Native Americans were descendants of the Ten Lost Tribes of Israel.

Thatcher T. Payne no doubt had personal reasons for wanting sewers on West Broadway and Reade Street.  The neighborhood was beginning to morph from one of upscale residences to commercial concerns.  And in 1859 he began construction on a modern store and loft building on the northeast corner.

No. 112 Reade Street was completed in 1860; an Italianate style structure clad in sandstone with a cast iron storefront.  The commercial tenants upstairs took the address of the side entrance, No. 113 West Broadway; while the retail space kept the Reade Street address.

While the Reade Street facade above the storefront was handsome, with segmentally-arched openings that sat on stone lintels supported by delicate brackets and topped with faceted keystones; it was the West Broadway elevation that stole the show. 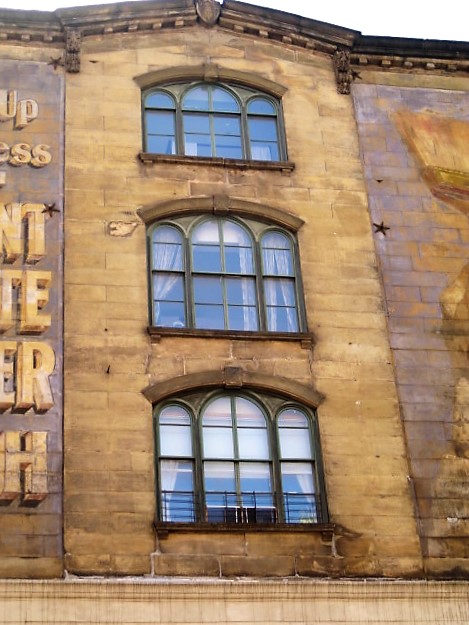 The central bay boasted a broad, tripartite window at ground floor.  Rising directly above, the openings at each story framed grouped exceptionally striking sets of three arched windows.  The stone, bracketed cornice rose to a slight pediment upon which a spread eagle--most likely cast iron--perched.

John H. Fraser immediately moved into the newly-completed building.   He was, according to The New York Times later, "said to have been the first manufacturer of show cases in America."  He had established his business in 1847.  His wide-spread respect was not only due to his prominence in society and business.  In 1832, when he was 28 years old, he served as a nurse during the great cholera epidemic.  Now wealthy, he and his family lived in a fine home at No. 13 St. Luke's Place.

Not long after setting up in the new quarters, an unfortunate incident took place--one most likely heightened by racial bias--that was nearly disastrous for one of Fraser's employees, Henry Sayers.

Fraser gave Sayers (described by The New York Times on June 12, 1860 as "a poor colored man") with a $50 bill.  It was an enormous responsibility, amounting to about $1500 today, and a decided show of trust and confidence on the part of Fraser.  Sayers put the bill in his tobacco box for safe keeping; then lost the box.

A newspaper called it a "somewhat suspicious story" and Henry Sayers was arrested, charged with larceny.  Faced with a prison sentence, Sayers had the presence of mind to place an advertisement in the local papers.  Astonishingly, the ad produced both the box and the bill.  In sympathetic wording most would find offensive today, The New York Times reported "The circumstance was made known to Justice Kelly, who immediately released the unfortunate old negro from prison."

It was at about this time that Thatcher T. Payne's health began to fail.  He died in 1863, The New York Times mentioning "for several years before his death was in feeble health and unable to give proper attention to business matters."

That same year John H. Fraser purchased the building.  He continued to lease space, and  one of his tenants that year continued the tradition of F. S. Weeks.  Hy. A. Smith & Co. advertised as "Paper Trimmer, Wall and Border."

By 1876 Victor E. Mauger, importer of stationery and playing cards, expanded into the building from his headquarters next door at No. 110 Reade Street.  Another tenant was S. S. Newton & Co., "coloring agents."

John H. Fraser died on February 21, 1885 at the age of 81.  His business was continued by his sons, Edwin and Charles.  Interestingly, Fraser's estate continued to own and manage the property; obligating the brothers to pay rent until the turn of the century.

A significant change to the Reade Street shop space came following the bankruptcy of Thorne & Rogers in 1891.  The paint and window glass dealers had been in business since 1881 and headquartered in Troy, New York, The Empire State: Its Industries and Wealth said of the firm in 1888, "Only the best paints, oils and varnishes are handled."

In May an advertisement offered the now-vacant store and sub-basement.  While the Fraser brothers took part of the store; in February 1893 Friedrich H. Hikler leased the entire space for nine and a quarter years at $3,250 per year (more than $88,000 today).

Hikler listed himself in directories as a "liquor merchant," a polite term that meant saloon keeper.  Apparently finding that the two floors below street level included in his lease were unnecessary for his saloon, he advertised on February 10, 1896 "A large basement and sub-basement to let; suitable for business or storage; cheap.  F. H. Hilker."

The former paint store would continue as a tavern for decades.  By 1902 Emil Deckelmeier and Nicholas Goelz, partners in Deckelmeier & Goelz, had taken over the saloon lease.  At the time breweries not only manufactured and sold beer and ale, they often operated saloons where only their own products were sold.  Deckelmeier & Goelz leased the saloon in December that year to the Peter Doelger Brewery for $2,500 per year.

At the end of the lease, in 1904, the partners leased it to Bernheimer & Schwartz, owners of the Lion Brewery.  They would renew the lease in 1909; but in 1913 Frank Vogric took over, renaming the business Vogric's Cafe. 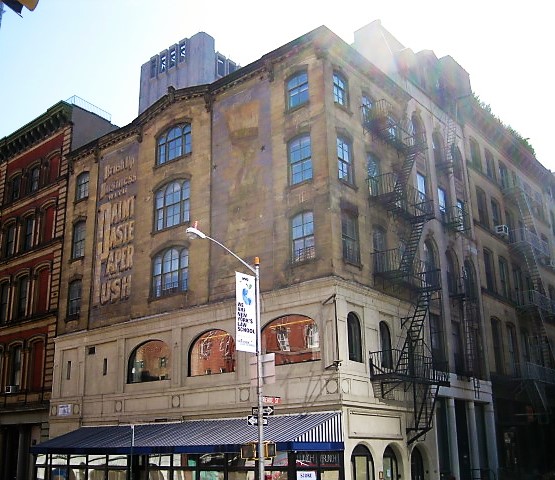 In the meantime, Edwin and Charles Fraser had obtained ownership of the building.  Interestingly, an influx of architects in the first years of the 20th century appeared.  Between 1900 and 1906 the offices of W. T. Totten, O. J. Ende Co., W. M. Gilson, and J. Schroth were all in the building.

In 1902 Edwin Fraser transferred his one-half ownership in the property to Minnie Fraser.  But something apparently went wrong and a year later he filed suit "against Minnie L. Fraser, action to cancel deed."  The courts ruled in his favor in 1905.

Prolific author Edward Earle Purinton had his office on an upper floor in 1903.  Sharing the building with architects, the Fraser manufacturing space, and the Manhattan Brazing Works (which promised in the March 1906 issue of Motor magazine, "We make a specialty of brazing cylinders, gears and machinery of every description"), Purinton wrote articles and books on a dizzying array of topics.

In September 1903 The Evening World columnist Mrs. Harriet Hubbard Ayer invited readers to give their opinions as to "Why do men marry the wrong women?"  Purinton fired off his explanation which somewhat encapsulated Edwardian views on marital and sexual roles.

He said, in part, "I make sympathy the dominant trait in an ideal wife.  A normal husband wants to be mothered as a baby, respected as a man, caressed as a lover, admired as a god.  Sympathy satisfies these longings.  Nothing else does."

Then, as if anticipating the reaction of female readers a century later, he blamed men for failed relationships.  "There are many ideal women, but few ideal wives.  The fault is the husband's.  If you can understand, appreciate and inspire any woman, you will find ideal wives surprisingly abundant."

Following Edwin Fraser's death, Charles was forced to give up his half of the property in 1908 so it could be liquidated. The building was sold at public auction on November 18 that year.


As tenants came and went in the upper floors, the saloon forced on.  In 1915 Hugo Enders held the liquor license for Vogric's Cafe.  But change would come, prompted by the enactment of Prohibition in January 1920.  After three decades, the days of local factory workers and businessmen sidling up to a mahogany bar for a glass of locally-brewed beer were over.

The surrounding neighborhood had, by now, become part of New York's shoe district.  In 1921 the Crescent Shoe Company, owned by Alfred W. Copland, moved in to No. 112 Reade Street.

That year alterations were done which did away with the cast iron storefront.  Two years later architect Samuel Rosenblum made further renovations to the building.  Offices were installed on the ground and second floor; while factory space continued above.  It was likely at this time that the two lower floors were faced in cast concrete with smatterings of classically-influenced decorations.


Other footwear firms would occupy the building throughout the decades, including S. & W. Shoe Co., the Fred Meyer Shoe Co., and Topper & Berger. 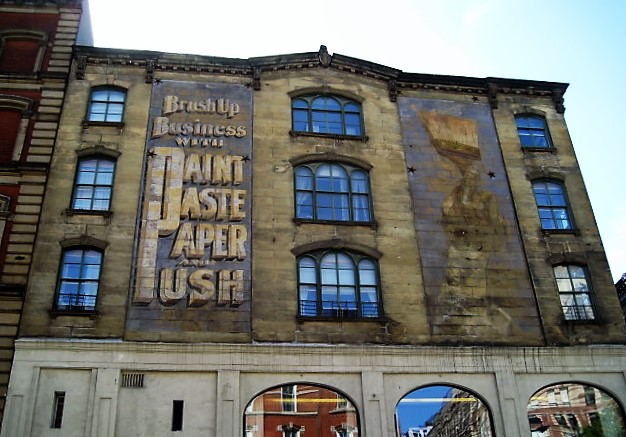 A conversion to residences in 2012 resulted in just one sprawling apartment on each of the top three floors, with commercial space below.  Remarkably, the make-over did not destroy the wonderful mid-century advertising for painted outdoor advertising on the West Broadway side.