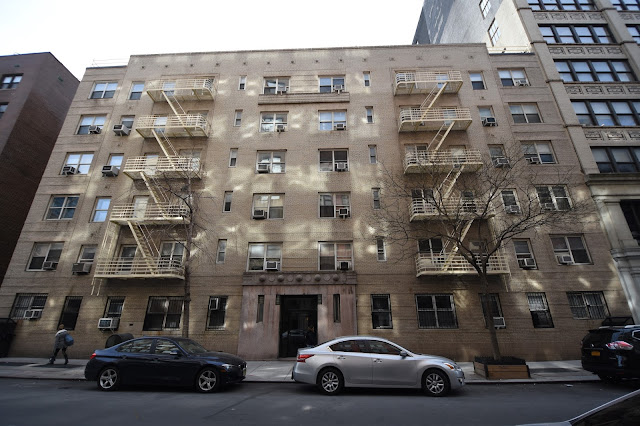 In the last quarter of the 19th century an tenement building at No. 210 West 19th Street had replaced rowhouses on the south side of the block between Seventh and Eighth Avenues.  An elderly couple, 81-year old Thomas Robinson and his 71-year old wife, Hannah, had lived on the top floor there for three decades in 1904.

The Robinsons reportedly got along well with everyone in the building--everyone, that is, except for Mrs. Helen Coyle who lived one floor below them.   In early December that year Mr. Coyle realized some of his clothing was missing.  The couple reported the apparent theft to police.

Trouble ensued when Helen went to the grocery on the afternoon of December 31.  In her absence Hannah Robinson noticed an envelope in the hallway of the building.  It was addressed to the Coyles.  According to her, she went to the Coyle apartment to delivery it, found the door unlocked, and entered.

Within minutes Helen returned and was positive she had discovered the in-house burglar.  She threw the old woman out of the apartment and when her husband came home they notified the police.  When detectives went to the Robinson apartment, Hannah refused to let them in.

"They forced their way in, and were greatly surprised to find the house given over to packages and parcels of various sizes and types, in all of which had been wrapped articles of value," reported The New York Times.

In fact, the apartment was stuffed nearly to the point of being unlivable.  Detective Frank P. Glennon told reporters the rooms were filled "literally to the ceiling."  The Times said "There were canned goods, silks and silverware, clothing cut glass and jewelry, crosscut saws, moth balls and millinery, shirtwaists, wax dolls and country hams, men's topcoats, kitchen utensils, and women's collar and cuff sets."

The detective quipped "The only thing I failed to find was an automobile."

The old couple were arrested, held in separate parts of the court house jail, and were not informed of their charges (which, of course, was burglary).  In the five days they spent incarcerated the police emptied their 19th Street apartment.

Finally, on January 5, 1905, Thomas appeared before a judge.  When he heard the charges, he was astonished.  They were not thieves, he explained.  His wife was what today would be termed a hoarder.

"I cannot understand how such an outrage is possible.  You see my wife had a mania for going to auction and bargain sales.  She's pretty headstrong, Hannah is, and I told her not to buy such a lot of cheap stuff that we couldn't use.  Why, we've got stuff in our flat that's been there for thirty years.  She'd never use anything or give it away, but she was always buying."

Hannah's mania was such that when they recently had run out of money, she "fretted" when she would read advertisements of sales because she was unable to take advantage of them.

Thomas Robinson made his living from the apartment, printing check tickets for coats and hats on a little machine.  They were used in coat check rooms in restaurants, theaters and clubs.

The elderly pair was set free; but their troubles were not over.  When they arrived home they found an empty apartment.  Not only had the police removed the packages, but Robinson's printing set and his finished tickets.

"They even carried those off," he told a reporter, "and I can't work until I get them back or a new set.  I owe my rent now, but I guess my landlord won't go back on me."   Indeed, his landlord, Thomas McVicker, assured him that he and "your old friends" would help.

They would need the help.  The sergeant in charge of the West Twentieth Street station dismissed the problem.  He asserted "the Robinsons would have to have the four wagon loads of goods that were taken from the Robinson flat returned; the police didn't do that sort of work."

In 1938, despite the ongoing Depression, the Seventh Chelsea Corp. laid plans to replace the old tenement building with a modern apartment house.  It commissioned the 42-year old Hyman Isaac Feldman to design the structure.

Feldman, who went professionally by his initials, was just 4 years old when his family immigrated to New York City.  He opened his own architectural office in 1921 and specialized in apartment houses.  By the time of his death in 1981 he had designed 2,500 such buildings in the New York metropolitan area.

The developers simultaneously put Feldman, known for his clean Art Deco designs, to work on another Chelsea apartment building, at No. 219 West 25th Street.   Both structures would be six stories tall and both would flex bold Art Deco elements.

Despite the Depression, both buildings quickly filled.  On October 1, 1939, even before they were completed, The New York Times reported that they were 75 percent rented.  The modest apartment sizes would have appealed to renters with tight budgets.  "Suites in the structures range from one and one-half to four rooms," reported the newspaper.

No. 210 West 19th Street was smaller and less flashy than the 25th Street building.  But the two shared some common elements, like their identical sculpture-like Art Deco fire escapes, the projecting brick courses that produced a modern, linear effect, and the faceted bosses set into the brickwork.  The entryway of No. 210 West 19th Street stepped into Art Moderne.  The hefty stone enframement was punctured by thin, lancet-like openings.  Feldman incorporated the geometric lamps into the stonework.  A jazzy entablature featured a jovial row of alternating half-spheres and flat discs.


Among the first residents would be, perhaps, the building's most celebrated.  Young Noah Greenberg and his mentor, Harold Brown shared an apartment in the newly-opened building.   Both were musicians; Brown's composition the "Christopher Robin String Quartet" had won the Bearns Price in 1930 and he listed among his teachers Leonard Bernstein for conducting, Aaron Copland, for composition, and H. Dittler for violin.  Greenberg was a burgeoning choral conductor.  But when he moved into the West 19th Street apartment, his focus was more political.

Two years earlier, at the age of 18, Greenberg had joined the Socialist Workers Party.   Ardently involved with the Socialist cause, he became acquainted with the 16-year old Edith Schor at SWP meetings and socials in 1939.   On June 21, 1940 the 21-year old Greenberg married Edith, who was now 17.  The newlyweds moved into the apartment with Harold Brown.

The trio left West 19th Street around 1944.  Eventually Greenberg lost interest in politics.  In 1952 he founded New York Pro Musica and is credited with reviving interest in medieval, renaissance and baroque choral music.   Harold Brown went on to be a highly respected musical teacher, composer and conductor.

The majority of residents came and went with little fanfare.   The few times their names would appear in newspapers had nothing to do with crime, scandal, social successes or political office.  When 11-year old Felix Garkosky was interviewed in 1957, for instance, it had to do with the four-lane highway that Parks Commissioner Robert Moses wanted to cut through Washington Square Park.

Felix was a student at St. Joseph's Academy at No. 17 Washington Square North.  His art teachers, Barbara Theobald and Sister Marie Berchmans, directed the classes to create crayon drawings depicting how they would like to see the park transformed.  Felix had a more sensible view of the public space than his elders.  He flatly said it would "be silly to make any changes at all, it's perfect just the way it is now."

But more than three decades of no bad press came to a startling end on April 15, 1970 when Apartment 4-F was raided.  Inside narcotics detectives found 220 pounds of pure heroin; described by officials as "one of the largest seizures of illegal drugs in the city's history."

Deputy Chief Inspector John P. McCahey announced "Once diluted, this much heroin would have put about a ton of drugs on the open market."  That amount would have provided 12.3 million individual doses. 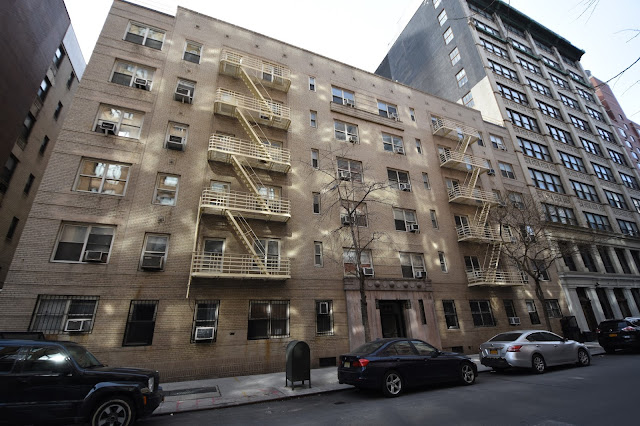 Life for residents at No. 210 West 19th Street quickly returned to normal.  In 1985 the building was converted to condominiums.   H. I. Feldman's 1939 design, with its smile-inducing Art Deco entrance, is often overlooked among the loft buildings of the Chelsea side street.