Something got in the way of its project, though; quite possibly the onslaught of the Great Depression.  But finally, a different developer, the newly-organized 405 East Seventy-second Street Corporation, filed plans on October 5, 1934 for "a new tenement house," as described by The New York Times.

The syndicate had commissioned Boak & Paris, Inc. to design its structure.  Both Russel M. Boak and Hyman F. Paris had worked in the drafting rooms of architect Emery Roth.  They struck out as partners in 1927 and by now were giving the Art Deco style--most often in the form of apartment buildings--their own architectural personality.

Completed in 1935, the six-story structure had eight apartments per floor.  The Depression may have been responsible for the seeming cost-cutting on avoidable materials and decoration.  The all-brick facade was sparsely trimmed in stone and the upper openings were blunt and industrial. 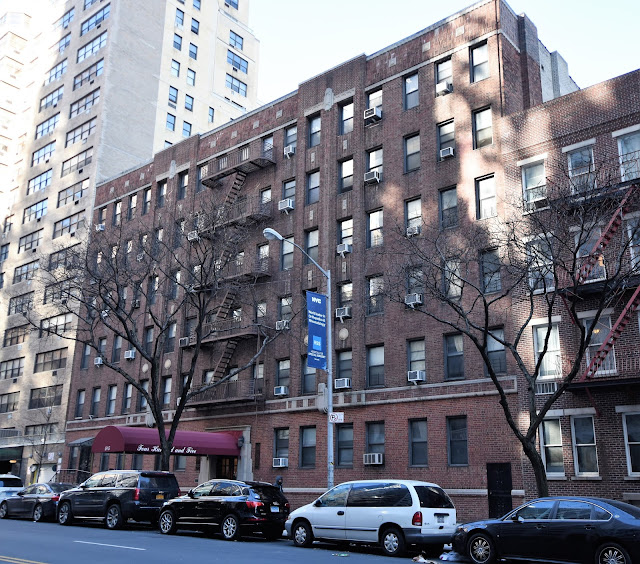 And yet the architects were able to create a striking Art Deco design using minimal, well-placed elements.  The stone-framed entrance spilled in waterfall tiers on either side.  The second floor was defined by a brick frieze outlined in stone.  Waterfalls reappeared here in the bases of two five-story piers that culminated in bold, if a bit stumpy, fasces. 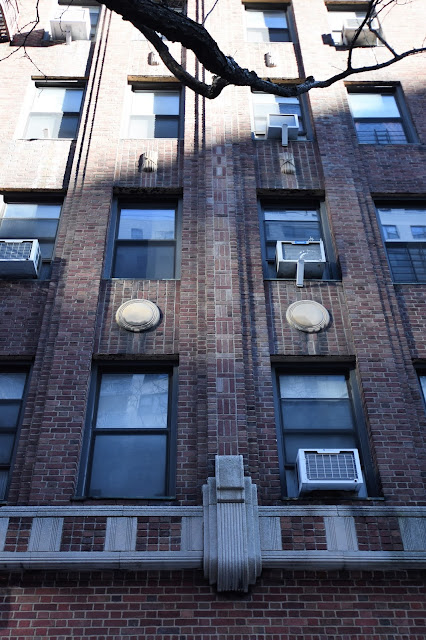 Although the Roman symbol of strength in unity had already been adopted by Benito Mussolini; the fasces here had nothing to do with the Fascist movement.  The symbol had gained popularity in America in the 1920s, appearing on several Federal buildings.  As a matter of fact, while Boak & Paris were designing No, 405 East 72nd Street, Cass Gilbert was busy working on new flagpoles for the Supreme Court Building, including the fasces among their symbols.

A dozen other smaller fasces dotted the spandrels of the fourth through sixth floors.  They, along with stone rondels, paneled blocks which speckled the parapet, and a decorative bandcourse above the sixth floor provided relief to the otherwise somber brick.  The architects turned the problem of requisite fire escapes into an architectural advantage.  The sculptural Art Deco railings gave the appearance of balconies, melded with the overall design and added dimension.

Despite the ongoing Depression the building soon filled.  Its tenant list was composed mostly of professionals, like attorneys and physicians.  Among the first residents was lawyer Fridolin A. Buholzer, a member of the firm John W. Davis.  Moving in next door to him was Frank Miller.  Theirs would be a contentious relationship.


When Buholzer came home each day he relaxed by playing his accordion.  The music that relieved his stress only heightened that of his next door neighbor.  On October 6, 1935 Miller banged on his door and threatened to call the police and have him arrested for disorderly conduct.  The lawyer insisted he had a legal right to play until 11:00 and demanded, according to a newspaper, "if Mr. Miller had a complaint he could make it to the landlord."

The feud had now begun.  Twice Miller called the police in an attempt to have his neighbor arrested.  He was successful in January and Buholzer was forced to appear in court on the charge of disorderly conduct.  The charges were dismissed.  And so now Buholzer struck back.

Publicity relations man George D. Lottman and family were also early tenants.  He and his wife, Betty, had two sons, Herbert and Evan.   Lottman started out as a writer and editor with diverse publications like the United States Tobacco Journal, The New York American (for which he was "zoo editor"), and Billboard.

Then, in 1928, he started his own publicity business.  By now he represented celebrities like Dorothy Lamour, Rudy Vallee, George Jessel, Helen Morgan, and Kate Smith.  Another of his clients, Texas Guinan, was perhaps as well known for her notorious speak-easy, the 300 Club, as for her film career. Lottman became ill in 1941, and died in his apartment on September 25, 1942.

Among the physicians living in the building at the time was Dr. Kenneth J. Loder and his wife.  The war in Europe brought with it hardships at home, including rationing of gasoline, nylon, and household staples like butter.   The private consumption of gasoline was further restricted in January 1943 when the Government banned the use of automobiles for anything but business purposes.

Dr. Loder thought, perhaps, no one would notice if he and his wife used their car on a Saturday night.  He was wrong.

The Office of Price Administration sent policemen on motorcycles onto the streets of Manhattan "to check on passenger cars and learn their business."   On January 9 they were focusing on places of entertainment, including the Metropolitan Opera House, Madison Square Garden, Carnegie Hall, and night clubs like the Stork Club and Eddie's.

Just before midnight, Dr. Loder was pulled over.  The New York Times reported he "admitted that, after working all day, he was going to see a motion picture, accompanied by his wife."  The couple was publicly embarrassed by their breaking the law and apparent lack of sense of patriotic duty (the newspaper noted only one other car that night had violated the ban).  Nevertheless, they were sent home without a fine and having learned a lesson.

Throughout the rest of the century No. 405 continued to be home to professional and financially-comfortable residents.  Attorney Julius G. Paider, Jr. and his wife the former Clara Stolba, lived here for years.  He was appointed law secretary to State Supreme Court Justice Ferdinand Pecora in 1945.  He subsequently served Justice Benedict Dineer and George M. Carney.  On April 5, 1971 he collapsed in the New York County Courthouse of an apparent heart attack.  The 68-year old was pronounced dead in Beekman-Downtown Hospital shortly afterward. 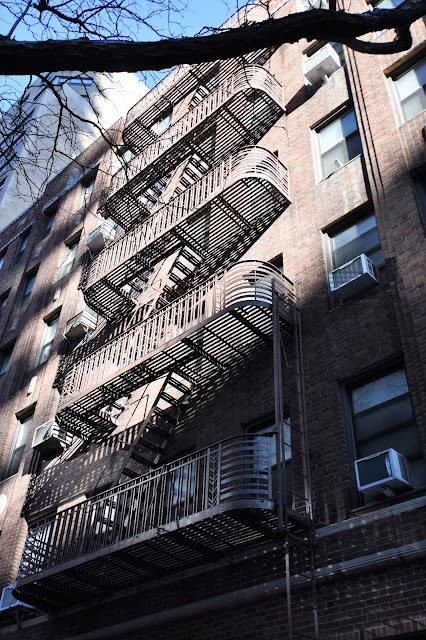 Little has changed to the Boak & Paris building.  It is one of only a few of their surviving Art Deco style buildings in Manhattan, and a striking example of how sometimes minimal ornamentation trumps excess--and that a fasces does not always mean there is a Fascist behind the scenes.