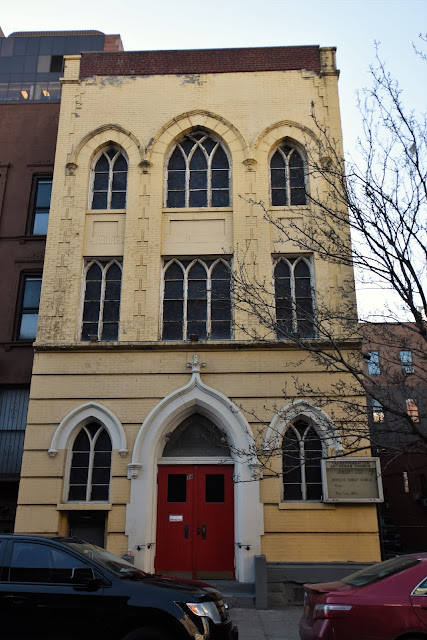 In 1894 general contractors banded together to form a united front against the tradesmen's unions.  The move was in direct response to a general strike of the carpenters' unions against sub-contracting, called "lumping."  At a meeting in Renwick Hall on September 24, the builders formed the Employers' and Builders' League, with architect and builder John P. Leo elected president.

The Real Estate Record & Guide later said it "proved so effective and useful" that it was incorporated.  It was now known as The Builders' League of New York.

John P. Leo remained its president and when the group laid plans for a permanent headquarters in 1897, he personally designed the building.  Located in Harlem at No. 74 West 126th Street, between Fifth and Lenox Avenues, it sat on a block lined with high-stooped brownstones.  Building Trades Employers' Association Bulletin later explained the group "settled there because a majority of its charter members dwelt north of Central Park and the location was convenient for them"


Completed in January 1898, the Record & Guide described the 25-foot wide building as "Romanesque, a style peculiarly adapted for use in a building of this kind."   Leo's was a restrained take on Romanesque Revival, foregoing the chunky stone blocks and massive arches in favor of an ordered facade.

Three stories tall, the base was of brownstone and the upper two stories of light gray brick.   Leo incorporated expected Romanesque Revival elements--heavy, ornate medieval carvings on the newels of the shallow stoop and brackets of the second floor balcony, for instance; but introduced arched openings--a hallmark of the style--only at the second floor.  The Record & Guide approved "The general effect of the building, externally, is one of dignity and solidity, and the details have been carefully studied by the architect."

In the basement were bowling alleys; on the first floor was a 10-food wide entry hall leading to the staircase.  Also on this floor were the billiard room and cafe.  The second story contained a foyer, large ladies' parlor and a double-height assembly room, the ceiling of which rose 16 feet.  Designed for entertainments as well as meetings, it featured a musicians' gallery.  On the top floor were a small apartment for the steward, a board room, and the hat and coat room.  The interiors were, according to the Record & Guide "tastefully decorated."

A reception for members was held on the evening of January 14, 1898; but the "formal opening" was held on March 10.  The Builders' League said of its upcoming "stag entertainment," "An interesting programme has been arranged and the occasion promises to be almost attractive one."

The Builders' League of New York may have been composed of builders and contractors; but they were chiefly well-to-do gentlemen.  For the dinner held on December 15, 1900, for instance, the assembly room was decorated with palms and flowers, and an orchestra played.  The Record & Guide noted "a confusing variety of wines and cordials increased the palatory enjoyment, and no doubt aided digestion."

By the turn of the century the Clio Club used rooms in the League's building for its meetings.  Founded in 1892 its members were mostly women, although men were occasionally admitted.  Its main purpose was to foster "mental improvement and social intercourse."  By its own description, it would seem there was little that the club did not discuss.  In Club Women of New York, the Clio Club said it "interests itself in education, the home, philanthropy, arts, social economics, the drama, fiction, historical research, nature study, poetry, and women's ideal."

In December 1901, for instance, the club met to hear Mrs. Charles Milton Ford read her paper "Civic Responsibility;" Mrs. Daniel B. Van Houten, who spoke on "The Gospel of Wealth;" and Mrs. Charles Appleton Terry, who addressed the "One Great Need of a Crowded City."  The New-York Tribune mentioned that "Musical numbers were interspersed."

On July 20, 1909 the Builders' League sold their clubhouse to the Harlem Swedish Evangelical Lutheran Church.   The church had been at No. 191 East 121st Street for years.  By 1910 it shared the building with the Lenox Avenue Union Church, which moved from No. 39 West 119th Street.

Interestingly, while the Harlem Swedish Evangelical Lutheran Church held the mortgage on the property, it was the Lenox Avenue Union Church that hired architect Nathan G. Kelsey in June 1912 to renovate the structure from a clubhouse to a proper church.  Kelsey's plans called for new structural beams, interior walls and, most importantly, "new front wall."  The renovations cost the church $10,000--more than a quarter of a million dollars today.  When completed, there was no trace of John P. Leo's club building.

Kelsey's two-part design featured a rusticated brick base interrupted by three pointed-arch openings trimmed in terra cotta.  The churches saved money by using brick almost exclusively in the detailing.  The quoins and paneled spandrels of the two-story upper portion were executed in brick rather than stone.  The three double-height Gothic arches were given terra cotta drip moldings.  Kelsey turned from neo-Gothic to Flemish Renaissance for the high gable, where brickwork more than the eave line suggested the stepped motif.

Two years later the Lenox Church announced an upcoming move.  Having merged with the Central Church of the Disciples of Christ, in February 1914 the two congregations reported that a new edifice would be erected "in the vicinity of 110th Street."

With its new home completed the Lenox Avenue Union Church sold its share of the 126th Street church to the Harlem Swedish Lutheran Church on October 18, 1918.  But the Swedish congregation would not stay much longer.

The demographics of the Harlem neighborhood had starkly changed.  The population was now mostly black--an issue that did not escape the notice of the United Lutheran Church.  In 1920 the Church moved to establish a "mission in the heart of Manhattan" for those worshipers who, according to the Minutes of the Biennial Convention, "on account of the color which God put in their skin, were without a home."

On New Year's Day 1923 the Harlem Swedish Lutheran Church was purchased for $57,000 (the Minutes grumbled that it was "almost twice its pre-war value).   The convention minutes said "This structure had originally been a clubhouse" but had been rebuilt "until it was a modern church with a beautiful auditorium on the first floor, a Sunday school room and kitchen on the second floor, janitor's quarters on the third floor, offices and rooms for the workers on the first and second floors, and a bowling alley in the basement."

"The name chosen, the Church of the Transfiguration, is the same as that of a famous New York church of another faith," admitted the minutes, but, it hoped, "in time [it] will become as well known in its way as the other 'little church around the corner.'"

Instead it was doggedly known for the racial make-up of its congregation.  On June 12, 1927, when The New York Times reported on the ordination of seven new Lutheran ministers, it singled out one.  "One of the class is a negro, Nicholas Morris Chisholm.  He will become assistant pastor of the Negro Lutheran Church of the Transfiguration."

For years the church would never be mentioned in articles about sermons, events, or celebrations with the identifying tag "negro" or "colored."   Perhaps the first example of the congregation being referred to simply as "the Lutheran Church of the Transfiguration" came in August 1930 when a change was made to the staff.  That was when James Soler arrived from Argentina to serve as pastor of the Spanish-speaking West Indian members.


Despite the make-up of his congregation, it was not race that was on the mind of Rev. Dr. Samuel Trexler on Sunday, March 10, 1935.  It was Adolph Hitler.

The Nazis had outlawed independent religious sects in Germany and ordered all churches to unify as the Protestant Reich Church.   Church leaders protested, forming the Confessional Synod, and demonstrated against the system.  A massive rally was planned for that same Sunday and Rev. Trexler announced his support from the pulpit.

"The protest of the churchmen of Germany planned for today must have a heartening effect upon Christians throughout the world," he told the congregation.  "Confronted by the State and the Word of God, they are like Luther at Worms when he said, 'Here I stand. I cannot do otherwise.  God help me.'"

The minister's prediction of a "heartening effect" was premature.  As could be expected in retrospect, the demonstration did not end well for the religious leaders.  On March 18 the Chicago Tribune reported "About 700 Confessional synod pastors were arrested in Berlin and throughout Germany during the last 24 hours to prevent them from reading the synod's proclamation which sharply criticizes the Nazi church regime."

The newspaper predicted that many more arrests would follow.  "More than 5,000 pastors are identified with the Confessional movement" and added "Nazi official acted aso against the Catholics and Masons.  Secret police searched the Convent of the Good Shepherd...and arrested the mother superior and her assistant for reasons which were not announced."

If press coverage of Transfiguration Lutheran Church seemed racially-focused before, it was never more so than following the May 30, 1956 ordination of 28-year old Rev. Robert Tage Neilssen.  The shocking news was reported throughout the state of New York.

The Associated Press reported Neilssen "will become the first white pastor of a New York church with an all-Negro congregation."  The new minister was barraged with questions that would be highly inappropriate today.  Why was he interested in serving a Negro congregation?  How was he received by the members?

The novelty of a white man shepherding a black congregation resulted in reporters filing into the church for Neilssen's first day on the job.  On June 4, 1956 The Times reported "At the Evangelical Lutheran Church of the Transfiguration...the Rev. Robert Tage Neilssen preached his first sermon as the white pastor of a Negro congregation."

Perhaps speaking more to the reporters at one point than to his flock, Neilssen said "Religiously speaking, segregation is living a lie.  When I deny that any man is my brother, I am denying that God is the Father of us all."

Racial tensions across America resulted in riots in New York, Houston and Miami in the late 1970s and 1980.   Rev. James Gunther, now pastor of Transfiguration, noted with near resignation in December 1981 "things do not look as hopeful as they did five or 10 years ago."  He suggested that minority church leaders should "give the city some advice in dealing with black and Puerto Rican constituencies." 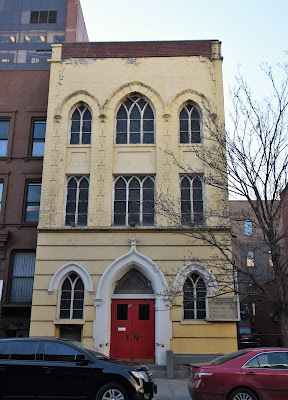 Transfiguration Lutheran Church continues its work after nearly 95 years in the remodeled clubhouse.  Sadly Nathan G. Kelsey's Flemish gable was removed rather than restored--no doubt because of financial reasons--and the brick and terra cotta facade has been painted.  The historic little structure nevertheless maintains a quaint presence among its brownstone neighbors.