On October 25, 1890 the Real Estate Record & Builders' Guide reported that John Ruddell had sold the "three-story frame dwelling" on the northwest corner of 93rd Street and Madison Avenue to Frederick A. Ringler for $33,500.   The journal got its report more than slightly wrong.  The high price Ringler paid--in the neighborhood of $900,000 today--was certainly not for a wooden house; but for a substantial brick and stone residence.


Ruddell had begun construction of seven houses stretching west along 93rd Street from the Madison Avenue corner a year earlier.  Designed by Gilbert A. Schellenger, they were Renaissance Revival in style.  At 17 feet wide and three stories tall, the six houses on 93rd Street were targeted to the upper middle classes; their brownstone facades handsome but not exceptional.


The Ringler house, however, stood apart.  Schellenger placed the entrance on Madison Avenue, creating a 68-foot wide frontage.   The 93rd Street elevation--almost three feet wider than its neighbors--bulged out in an eye-catching three-story bay.   The architect further divorced the house from its neighbors by cladding the English basement and parlor floors on the avenue side in undressed stone; and the upper stories in warm red brick.

Born in Friedwald, Germany in 1852, Frederick A. Ringler had come to America in 1866 with his brother, Charles.  He learned electrotyping in Chicago before moving to New York following the Great Chicago Fire in 1871.   Frederick continued in the electrotype business, while Charles opened the Ringler Brewery.   When Charles died in 1888, Frederick took over management of the brewery; while simultaneously building his printing operation.

Ringler had married Maria Stolz in 1858.  Their only child, Victoria Anselma, was born in 1880.  The family had lived in a free-standing house far to the north in what today is known as Hudson Heights.  By the time they moved into the Madison Street house, King's Handbook of New York claimed the F. A. Ringler Company "is called the largest printing-plate establishment in the world."

Seemingly indefatigable, Ringler reportedly increased the brewery business by 25 percent within a short time, and was president of the German Leiderkrantz (one of the oldest German singing societies in the city).


As Maria Ringler supervised the unpacking of household items, Frederick had a looming threat constantly on his mind: prohibition.  On March 8, 1891 The New York Times reported "The brewers here and elsewhere in the State are secretly laying plans to defeat the proposed prohibition amendment to the Constitution, which is to be submitted to a popular vote either next month or in November."

A "secret circular" had been printing by a joint committee representing groups like the State Brewers and Maltsters' Association and the Lager Beer Brewers' Board of Trade.  The distribution of the circular was no small project.  The Times noted "There are 40,000 persons in New-York State in the beer-brewing and allied industries."  The fact that Ringler, with his expansive printing plant, was on the committee is not surprising.

The prohibition amendment did not pass that year; but the threat, championed by the tireless temperance proponents, continued to cast a shadow over the brewing industry.  The brewers were also fighting for loosened restrictions on selling alcohol on Sunday.  F. A. Ringler was pro-active in the fight on the afternoon of Wednesday, September 25, 1895.

That day a parade was held by the United Societies for Liberal Sunday Laws.  Theodore Roosevelt, president of the Police Board, had been invited to the reviewing stands; however, as The New York Times pointed out, "Some doubt was felt as to President Roosevelt attending the parade, but it was dispelled when he stepped on the reviewing stand at 3 o'clock."

Members of the committee who organized the parade, including Frederick Ringler, were already in the stands.  When the "immense crowd" in front of the stands recognized Roosevelt, they turned and cheered.

"Brewer F. A. Ringler seized the opportunity to insert at this moment a button bearing the inscription, 'Liberal Sunday Law' in the lapel of President Roosevelt's coat."   Roosevelt was not fooled and "laughingly removed it."  He told Ringler he would keep the button as a souvenir.

The Ringlers' social lives most often involved the activities of the German Leiderkranz.  In May 1897, for instance, they accompanied the group on a six-week tour of Europe that included giving concerts in major cities like Vienna, Milan and Munich.  And in August 1903, for instance, they were among the 1,500 members who took over the Oriental Hotel in Manhattan Beach for the group's annual Summernight's Festival.

Social activities became more personal when the Ringlers announced the engagement of Victoria to Franz Victor von Marbach Provost on August 25, 1900.   Provost had recently graduated from the Cornell University Law School.  The couple was married in January 1901 and moved into the Madison Avenue house; but tragedy soon followed.  Franz, who went by the name Victor, died "of unknown causes" five months later at the age of 23.

In 1904 Veronica married 37-year old William Cabble Provost.  He was treasurer and director in the William Cabble Excelsior Wire Works, founded by his grandfather.   The couple moved to Brooklyn where William became a member of the Brooklyn Yacht Club, the Bensonhurst Yacht Club and the Marine and Field Club.  Veronica was widowed again when he suffered a fatal heart attack on August 4, 1918.

The concept of non-discriminatory hiring was unheard of in 1918; so when Ringler placed a held-wanted advertisement in the New-York Tribune on June 29, he made his preferences clear.  "Christian Young Men between the ages of 16 and 18 to work as general helper in electrotype and engraving business with a prospect of learning the business."

Despite the brewers' decades of valiant opposition, Prohibition came to pass in 1920.  With the Ringler Brewery now shut down, Frederick focused on his printing business.  The following year he was presented with a handsome silver cup by the International Association of Electrotypers of America in tribute to his 50 years career. 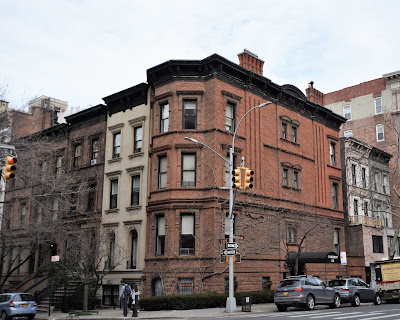 Maria died after a brief illness on July 13, 1924.  Her funeral was held in the house two days later.  Frederick remained in the house until his death on September 8, 1929.  His substantial estate went to Veronica.

In 1935 owners George and Florence Kosmak had the stoop removed and the entrance lowered to street level.  The former basement, now the first floor, was divided into two commercial spaces; while the upper floors were converted to two apartments each.

A doctor's office opened in one of the lower spaces, while Charlotte Boardman Rogers operated her bookstore from the other.  After she declared bankruptcy in 1939, the space became a luncheonette.

By 1965 the ground floor had become Cisneros, a gallery that featured modern artists.  It was replaced when a 1981 renovation updated the apartments upstairs (still two per floor) and installed a restaurant in the ground floor.   New York Magazine critic Gael Greene described Devon House on February 1, 1982, saying walking into the restaurant, "past its anonymous uptown-on-Madison facade, you might believe you were in a country inn or a Caribbean guesthouse."

She was more taken with the ambience than the cuisine, however.  "If only the food were brilliant.  At $100 for two, it ought to be.  Instead, it is...good."  Despite Greene's tepid take, Devon House survived for several years, followed by Demi Restaurant.  The continental restaurant described itself as "charming and cozy." 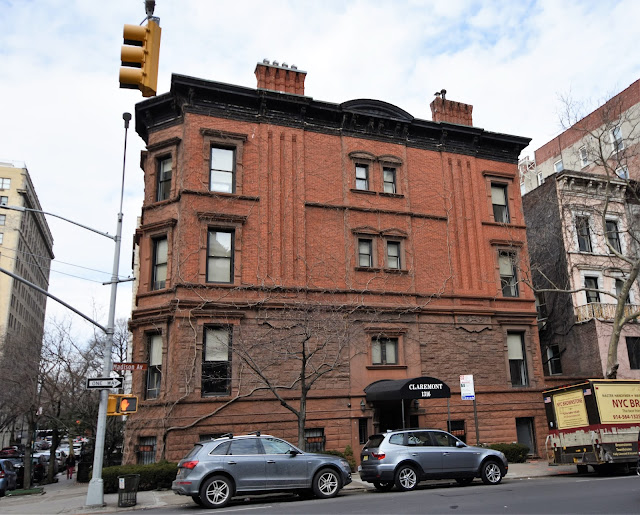 Today the Ringler house is owned by The Claremont Group, developers and builders, and houses their headquarters.  Other than its lost stoop, it has survived more than a century and a quarter with little change since the afternoon when a brewer pinned a pro-alcohol button on the lapel of an unsuspecting Theodore Roosevelt.