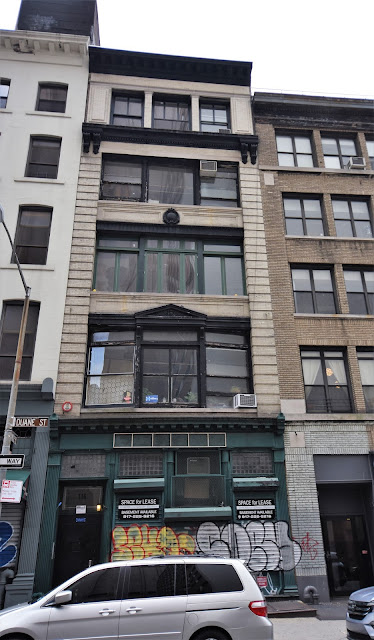 Duane Street was still lined with brick-faced homes in 1841; but change was rapidly overtaking the change.  As well-to-do residents moved farther north; merchants and shopkeepers moved into their former homes.  On July 22, 1841 an advertisement appeared in the New-York Tribune.  "Ladies who are particular in the article of Shoes, we would recommend to call at No. 116 Duane-street, where they will find some choice specimens, made of the best materials and of superior workmanship, combining elegance with durability."

It was perhaps the first hint of the shoe district that would engulf the Duane Street neighborhood before the end of the century.

In 1862 the house where the shoemaker had been was replaced by a five-story commercial building faced in white marble.  The cast iron storefront was manufactured by D. D. Badger & Co., run by Daniel D. Badger who was highly responsible for the popularity of cast iron facades in New York City.


The initial tenants were all in the wholesale dry goods business.  They included Joseph I. Barnum, "clothing;" Motts, Hyde & Vanduzer, "woolens;" and Runk & White, "clothing,"

Fifteen years later, in 1876, there were still only three three tenants, Meyer and Frank Neubrik's clothing firm, M. Neubrik & Brother; Isidor Silverman, who dealt in "window shades and paper hangings;" and importer Henry C. Ely.   One of those firms was hiring in December 1878.  An ad in The New York Herald sought a "Boy--Must have business experience; bright, honest, industrious; salary first year $100."  The wages would equal about $50 a week today.

Sisters Adele and Annie Mary Hutton were among the first New York socialites to marry European nobility.  Annie became Countess Harold de Moltke Huitfelt, and Adele the Marquise de Portes.  Although the sisters lived in Paris, they retained possession of their various Manhattan properties, including Nos. 114 and 116 Duane Street, owned by Adele.

On Christmas Eve 1892 Adele died in Paris.  Her husband Comte Henri de Portes, rather quickly liquidated her property.  On May 27, 1893 The Real Estate Record & Builders' Guide noted that he had sold both Duane Street buildings to Hoffman Brothers, for $250,000.  The significant price tag, around $6.8 million in 2017, reflected the commercial activity and property values in what was now New York's shoe district.

The marble building filled with footwear companies.  In 1895 the Boston Guarantee Shoe Company was here; and within two years shoemakers I. E. Schoonmaker & Co. (Hiram Schoonmaker would stay on past the turn of the century); and David Simon would move in.

On March 9, 1899 The New York Times reported that the "marble and iron front building" had been purchased by Leo Babalgin.  Along with Schoonmaker, his tenant list included the boot and shoe firms Carlisle Shoe Co.; Friedland, Epstein & Co.; and Hathaway, Soule & Harrington.


By 1903 No. 116 had a new owner, Emanuel Stein.  He hired architect Benjamin E. Stern to do the first of a string of renovations.  The $12,000 in updating initiated in March that year included "new steel beams, girders, elevator shaft, [and] partitions."

Stern would be back 11 years later.  Daniel P. Morse, president of Morse & Rogers, owned No. 116 in 1914, as well as the adjoining building at Nos. 118-120.  He commissioned Stern to update both buildings.  When The New York Times reported on October 9 that the Concord Shoe Company had leased the store and basement of No. 116 for three years, it noted "Extensive improvements are being made to the building, including new front, elevator changes, etc."

Stern's redo of the facade replaced the elegant white marble with beige brick.  The no-nonsense commercial design featured broad expanses of glass.  The sparse decoration, influenced by the Arts & Crafts Movement, were limited to a projecting bay at the second floor, topped by a triangular pediment; rusticated piers along the sides, a cast metal cartouche and paneled spandrels.  Interestingly, D. D. Badger's cast iron storefront was left intact.  The cast cornice between the fourth and fifth floors, too, seems to be a surviving element from the original building.

When Concord Shoe Company signed the lease, The Record & Guide mentioned that the deal, "together with those involving six other buildings...indicate the continuance of the shoe and rubber trade in that vicinity."

After renting the store and basement for five years, Concord Shoe Company signed a lease for the entire building in January 1919.  The Record & Guide said "It is one of the best buildings in the shoe district, with elevators, heat and all improvements."  Apparently the Concord Shoe Company only partly agreed.  Only days later the firm announced that it "contemplates alterations" to the building.

The George H. Snow Co., shoe manufacturers, was already in the building; and before the year was out Concord Shoe Company would lease space to the Oriental Slipper Mfg. Co., and the top floor to the U. S. Electric Mfg. Corp.

In 1920 the "recently modernized" building was valued at $125,000; nearly $1.5 million in today's dollars.  Although the shoe district was still firmly implanted on Duane Street, luring tenants like the Saks-Meth Shoe Co. in 1921; other concerns moved in as well.   In 1937 the S. Weinstein Supply Company, hardware dealers, moved in.  And Thomas H. Hindle's typewriter supply store was still here in 1940.

S. Weinstein Supply Company found itself the victim of a long-term felon in 1942.  William Conklin did not fit the normal description of a veteran crook.  The New York Times described him as "an elderly, well-dressed man" 66-years old.  Despite his grandfatherly image, he had a record of 28 arrests and 21 convictions going back to 1898; and had served terms in Sing Sing and the Atlanta Federal Penitentiary.

One tenant found itself on the opposite of the law five years later.  Shoe buyer George F. Arronson and his sons, Myron and Jules, posted $5,000 cash bail on January 23, 1947, charged by the Federal Government with "conspiring to bribe an official of the War Assets Administration." The New York Times explained "The defendants are alleged to have offered a WAA official $20,000 to help them fraudulently purchase nearly $1,000,000 in surplus steel, textiles and shoes."

No. 116 continued to be home to shoe companies as late as 1958 when the Asher Shoe Company moved in.  Then, as Tribeca changed to a trendy residential neighborhood, the upper floors were converted to apartments in 1996.


In 2016 the ground floor, where Concord Shoe Company sold footwear for years, became home to the Trinity Boxing Club.  Although the Corinthian capitals of the pilasters and columns have fallen off; Daniel Badger's cast iron store front with its multi-paned transoms survives somewhat humiliated by roll-down security gates and graffiti.  The incongruous 1914 upper floors are little changed; but leave us wondering how the marble front must have appeared.