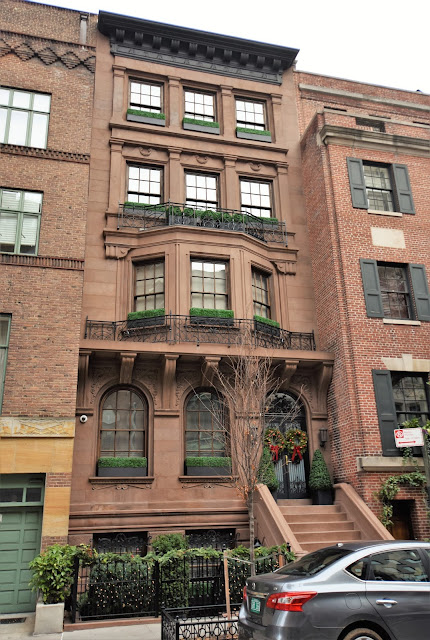 The block of East 80th Street, between Madison and Park Avenues, saw an explosion of construction in 1883.  Among the upscale homes erected that year was No 51, a 23-foot wide brownstone fronted residence with a rather surprising personality.

Builder-developer Edward Kilpatrick sometimes acted as his own architect; but for this house he hired brothers David and John Jardine.  The partners were responsible for the design of scores of dwellings on the Upper East Side and this one would be what Victorian critics sometimes referred to as "a happy marriage of styles."

The high brownstone stoop led to the parlor level above the rusticated English basement.  Here aggressive stone brackets overwhelmed the delicate spandrel carvings of the arched openings.  The brackets upheld what at a glance appeared to be a sturdy balcony; but in fact functioned only as a platform for the angled bay.


The third floor windows were separated by Doric pilasters and capped with swan-necked pediments, each graced with a carved garland.  The top floor openings received the same treatment, sans pediments.  The design was completed by a handsome cast metal cornice.

The Blum family remained in the house for nearly 14 years, selling it to real estate operator Bernard J. Ludwig in February 1898 for $49,000.

Mrs. Ludwig was active in Jewish social and philanthropic affairs.  None, of course, were more important to the family than daughter Hermina's debut and her subsequent marriage.  On January 23, 1910 The New York Times society column reported that her engagement to Jerome Bernheim had been announced.   On Thursday, April 21 about 250 guests were present at the ceremony in Delmonico's

In May 1915 the house was leased to Arabella Lewis, the widow of Walter Herron Lewis who had died in 1910.   Lewis, who had been a member of the drygoods firm H. & W. H. Lewis, had also been a trustee of the New-York Life Insurance Company, a director of the Home Insurance Company and a warden of Trinity Church.  He and Arabella B. Dash were married on Valentine's Day 1856.

Arabella's two daughters were married--Mabel to Stoughton Bell and Madeline to broker Frederic Foster Carey.  At 86, Arabella's social activity had significantly slowed and it was Madeline who overtook the spotlight in society pages.  The Careys' city home was at No. 53 East 64th Street and, like Arabella, their summer house was in Tuxedo Park.

Most likely because of Arabella's advancing age, the Careys moved into the 80th Street house by 1917 when they announced the engagement of daughter Madeleine Marie to Lt. Charles Reed of the Aero Corps.   Reed had recently returned from the French battle front.


Arabella Dash Lewis died in the house on January 29, 1918 at the age of 89 after a brief battle with pneumonia.  The Carey family soon moved out, and in April 1919 No. 51 was leased to the 59-year old Eugenius Harvey Outerbridge and his family.

Outerbridge had married Ethel Boyd in 1891 and the couple had two children, Ethel, born in 1892, and Kenneth, born in 1904.  "Eugene," as he was familiarly known, was the President of the Chamber of Commerce and founder of the Agasote Milling Company, makers of a fiberboard composed of recycled cellulose.

In 1921 Outerbridge was made the first chairman of the New York and New Jersey Port Authority.  It may have been the new and weighty responsibility that kept him home that summer.  On June 16 The New York Herald noted that "Mrs. Eugene H. Outerbridge of 51 East Eightieth street has gone to Maple Ridge Farm, her country place in Litchfield Conn."  Ethel would have to tough it out alone, it seems.  "Her daughter, Miss Ethel Outerbridge, is serving with the American Committee for Devastated France in Soissons."

Outerbridge quickly discovered that organizing and running the Port Authority was a major challenge.  He was dealing with two states, two governors and two mayors, all of whom it seemed were reticent to share control.  On November 29, 1921 he told the Chamber of Commerce that the port district "should be unified under a single administration that there should be a consolidation of shipments at proper classification points...[and] that all terminal stations should be union stations."

When New York City's mayor, John F. Hylan, proved obstinate, Outerbridge erupted.  He issued a statement on January 3, 1922 that said in part "it is unthinkable that any municipality or other unit within the port district can long refuse to cooperate and join in a movement so essential and so beneficial to the interests of all combined."

Ethel received a serious scare the following April when she and a friend, Eleanor Butler, were riding along 72nd Street in the Outerbridge car.  The chauffeur, Thomas Davies, turned onto Lexington Avenue just as the Lexington street car approached the intersection.    As the limo crossed the tracks, the street car slammed into it.  Eleanor Butler was thrown from the car, Ethel was "pitched against a seat," and Davies received cuts on his forehead.

The chauffeur drove the banged-up car to the Presbyterian Hospital where Butler was treated and released.  Ethel was more seriously injured.  She was admitted with two broken ribs and cuts over the eye.

Eugene's vision of unifying New Jersey and New York was somewhat symbolized by the opening of the more than 10,000-foot long steel cantilevered bridge in June 1928 that connects Staten Island with Perth Amboy.  Although many residents of New York and New Jersey today assume that it is named because it is the southernmost bridge in New York State, or the most remote in New York City; the Outerbridge Crossing was in fact named for Eugenius H. Outerbridge.

The lower level was converted for the Bayer Art Gallery in 1959; but was returned to a single family residence in 1964.  For many years it was home to advertising executive Willard B. Gordon, who died in 2001.


The architectural firm of Vail Associates restored the facade and updated the interiors, simultaneously preserving much of D. & J. Jardine's period detailing while providing modern amenities for a 21st century family.

non-credited photographs by the author
Posted by Tom Miller at 2:07 AM