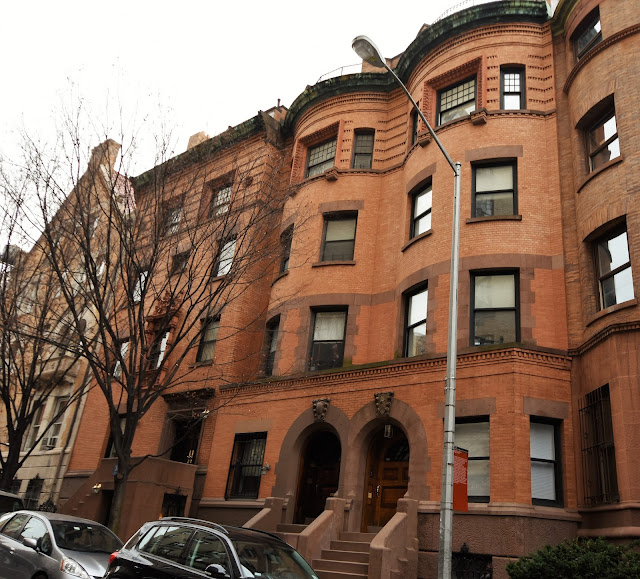 Just before dissolving their partnership, Hugh Lamb and Charles Alonzo Rich embarked on an ambitious project in 1890.  The rapid development of the Upper West Side resulting in real estate operators, in some cases, buying full blockfronts and filling the plots with harmoniously-designed speculative dwellings.

Lamb & Rich not only designed the 14 houses which would fill the western side of West End Avenue, between 76th and 77th Street and wrap the corners; they acted as their own developers.  Calling them "fine houses," the Real Estate Record & Builders' Guide said "together [they] comprise one of the handsomest blocks on the West Side."


The group was completed in 1891; a jumble of historical styles and irregular roof lines.  The architects' use of varied materials--limestone, terra cotta, copper, brownstone, and brick--as well as spiky Francois I dormers, aggressive copper-clad hoods, balconies and bays create a lively streetscape along West End Avenue.  But the three houses facing West 77th Street, Nos. 302 through 306, were more sober.

Four stories of orange brick sat upon brownstone basements.  Less flashy than their avenue neighbors, they were a reserved take on Renaissance Revival.  Bricks laid with their corners facing out created serrated bands that flowed from house to house along the top floor.  Nos. 304 and 306 (just 18 feet wide) were near mirror images, with bowed fronts above the parlor floor.  The much wider No. 302 (at 28 feet) flexed its individuality with a sideways stoop and a magnificent terra cotta frame that imitated a Venetian balcony at the second floor.

Perhaps because they were parting ways, Lamb and Rich sold the entire unsold row "at wholesale" to George F. Vietor.   In September 1892 six had been sold at widely varying prices--from $31,000 to $80,000.  Vietor would struggle to sell a few of the others.

In the meantime, the buyer of record for No. 306 was Emma B. Putnam, wife of the well-known publisher, Irving Putnam of G. P. Putnam's Sons.

The firm was founded in 1838 when Irving's father, George Palmer Putnam went into partnership with John Wiley.  In 1872 the company became G. P. Putnam's Sons when Irving and his brother George inherited the business.  By now Putnam's Magazine was highly popular; the company operated its own printing business, the Knickerbocker Press, and boasted authors like James Fenimore Cooper, Washington Irving and Edgar Allan Poe.

Irving and Emma were staunch supporters of the arts.  He was a member of the Chicago Art Institute and she was a founder in 1897, along with high-level socialites like Mrs. Nicholas Fish, Mrs. John C. Wilmerding, Mrs. William C. Whitney and Mrs. Henry Villard, of the Women's String Orchestra Society.

Running a successful publishing firm was not without its headaches.  On April 22, 1899 a reporter from the New-York Tribune knocked on the door of No. 306 West 77th Street to ask Putnam about Rudyard Kipling's law suit against the firm, filed earlier that day.

"What do you think the trouble could possibly concern?" Putnam was asked.

The publisher expressed his frustration, saying "We would have been glad, and were anxious, to effect any reasonable compromise, and we were willing to give up a good deal to avoid just such a trouble as this, but Mr. Kipling has refused to give us any specific information...Mr. Kipling simply says: 'You've wrong me; now, stop and pay damages.'"

More trouble came the following year surrounding the company's publication of Sapho by Alphonse Daudet.  When a stage play of the same name was deemed immoral, District Attorney Gardiner sent "seemingly well educated man," according to the New-York Tribune on April 1, 1900, "to go to the publishing house of G. P. Putnam's Sons...and do his utmost to purchase some improper book."

The newspaper reported "This man succeeded in purchasing at the Putnams' store a translation of 'Sapho' which was so modestly worded that it proved to be a bitter disappointment."  Nevertheless, rumors spread that the Putnams were peddling smut.

Irving and Emma remained in No. 306 through 1904; before selling it in December that year to John C. Clark.


Another of the early sales of Lamb & Rich's row was No. 302 West 77th Street, sold to Andrew J. and Annie M. Todd on April 28, 1892.  The couple would not stay appreciably long, and put the house on the market in March 1896.  With the city and country still in the grip of the Financial Panic of 1893, it was the worst possibly time to sell real estate.  An advertisement in the New-York Tribune described the house as "Perfect condition, will be sold at great sacrifice, far below value."

Indeed, the Hicks family paid only $20,000 for the upscale home.  Samuel H. Hicks was an officer and director in the Beech Creek Coal and Coke Co.  His New York roots extended to before the Revolution.  He and his wife, the former Elizabeth Ryerson Holden, moved in with their unmarried son, S. Chudleigh Hicks.

After the family sold the house to Samuel S. Childs in 1901, there was a rapid-fire turnover of owners.  Childs resold it to Carrie I. Rowell and her husband H. C. Howell who operated the residence as a boarding house (advertising in November 1901 "Back parlor, other large rooms, in private house; modern improvements, desirable, fashionable location).  He sold it in November 1903 to to Harry C. Allen, who sold it in 1905 to Sally H. Walker.  The dizzying change in landlords resulted in one tenant ending up in court, unsure of who had received his rent.

No. 302 returned to a private home when actress Eleanor Robson purchased it from Sally Walker in October 1907.  In reporting the sale, the New-York Tribune noted "The prices of houses in the street range from $30,000 to $50,000."

Moving in with Eleanor was her mother, actress Madge Carr Cook.  Earlier that year the New-York Tribune wrote "Mrs. Madge Carr Cook has offered another exhibition of American talent in character acting as Mrs. Wiggs at Terry's Theatre, and delighted a first night audience.   The British-born actress was well-known; but the title role in Mrs. Wiggs of the Cabbage Patch was her most memorable.

Eleanor had started her New York career only about two years earlier as Mary Ann in Merely Mary Ann.  When the production was staged in London it "won for the actress esteem in literary and artistic circles, and she claimed among her friends the late Marion Crawford, George Bernard Shaw, Israel Zangwill, Lewis Parker Barrie and Pinero," according to the New-York Tribune on February 13, 1910.

The actress's career and life would change a few days after that article, which began "Formal announcement of the engagement of Miss Eleanor Robson and August Belmont [Jr.] was made last night to a wide circle of intimate friends."  The millionaire and the actress had been seen socially for two years and the engagement "did not greatly surprise" their friends.

The Tribune noted that the wedding, to take place the following month, "will be a quiet one, at Miss Robson's home, No. 302 West 77th Street."  Following their two month honeymoon on the Belmont yacht, Eleanor gave up the stage, concentrating on philanthropies and managing the many estates--a six-story Manhattan mansion, an 1,100-acre estate in North Babylon, Long Island, a villa in Newport, and houses in South Carolina and Kentucky.

Belmont died in December 1924; and Eleanor live another 55 years, dying just before her 100th birthday in 1979.  Despite being married to one of America's wealthiest men, she retained ownership of the 77th Street house until August 1921 when she sold it to Henry B. Herts and his wife, Cynthia.

All the while the house next door at No. 304 had seen a long list of owners, starting with Gustavus Clark Hopkins, the senior member of cotton merchants Hopkins, Dwight & Co.  Born in Alabama in 1844, he was President of the New York Cotton Exchange when he moved in; stepping down in 1898.  He became ill in June 1900; dying in the house on December 12.  His funeral was held in the parlor three days later.

Hopkins's widow sold the house to Thomas L. Watt, and like its neighbors it underwent a quick succession of owners.  In 1902 he wold it to Moritz L. Ernest; who sold it that same year to Mary Lowe; who sold it a month later.  It became home to Ransom Noble, who co-founded the Niagara-French Battery Co. in 1918.

Before long all three homes would become rooming or apartment houses.  No. 302 was converted to one apartment on each of the first through third floors, with three furnished rooms on the top floor, in 1945.  In 1940 No. 304 had been altered to "furnished rooms;" and by 1925 No. 306 had been broken up into rented apartments.   Unmarried, 50-year old Anna Neiman was living there that year.  For years she had been a cashier in the Navarre Hotel on Seventh Avenue and 38th Street.

On the night of February 23 she stepped off the curb to Broadway and 76th Street and found herself in the path of an oncoming taxicab.  She panicked and froze.  The cab struck her, causing a fatal skull fracture.

Today both Nos. 302 and 304 have a duplex apartment in the basement and parlor levels, with a triplex above.  In 1966 No. 306 was converted to two apartments per floor.  Although Nos. 304 and 306 have lost the the curved glass in their upper windows; the three houses appear little changed outwardly since their completion 125 years ago.