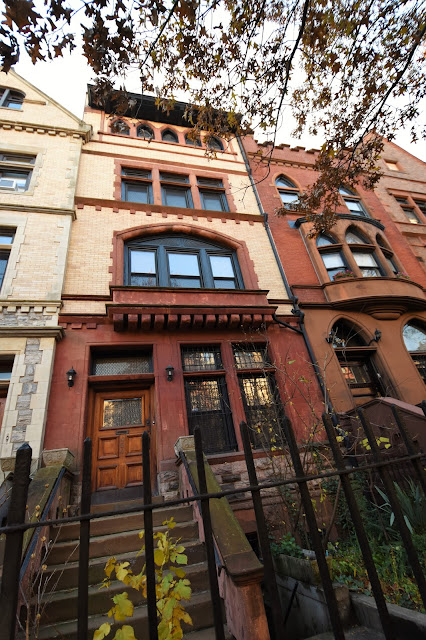 In December 1886 wealthy silk dealer William M. De Forest and his son, also named William, were poised to make their mark on the recently-developing Hamilton Heights neighborhood.  Once part of Alexander Hamilton's extensive estate, The Grange, it was quickly becoming an upscale northern suburb.

That month the Real Estate Record & Builders' Guide noted "More than twenty elegant houses, of English Gothic, Flemish and other styles, as modified by the taste of the architect Mr. Wm. E. Mowbray, are already planned and will be built without delay."  Among these was a row of eight houses on the south side of West 144th Street, between Convent and Amsterdam Avenues.

William E. Mowbray's picturesque medley of Queen Anne, Tudor Revival, Flemish Revival and other styles would create a fantasy neighborhood.  But William H. De Forest's bankruptcy and subsequent commitment to an insane asylum brought the project nearly to a full halt.  William Jr. took over, and the row, stretching from No. 452 through 466, was finally completed in September 1890.

No. 454 was a quaint marriage of neo-Tudor and Gothic.  Mowbray used beige brick and brownstone to create a vibrant two-colored facade.  The eye was drawn upward from the understated, planar parlor level to three floors of energetic design.  Three grouped openings at the second floor were unified below a Queen Anne-style sunburst transom panel.  A stone pseudo-balcony sat on tightly-packed corbels.   Like those below, the grouped openings of the third floor were outlined in stone quoins.  The fourth floor was highlighted by a charming row of Gothic-pointed windows below a deeply-overhanging cornice.  By lessening the successive bulk of the elements--from the heavy brownstone base to the delicate top floor windows, Mowbray kept the residence visually grounded.

No. 454 was leased to wealthy produce merchant Charles W. Weston.  The family maintained a summer estate in Milton, New York.  In March 1892, about the same time that the Pecks were receiving title to No. 454, the Weston's closed upstate home was being enjoyed by 20-year old William Williams and an accomplice.

On March 10 The New York Times reported "Williams has made a confession in which he says that his first idea was robbery, but he and his companion found the accommodations of the house so comfortable that they determined to spend the Winter there."  The newspaper noted they had broken into the wine cellar "and used the contents freely."

Williams told police "We just had things as we wanted 'em; we was the bosses of a regular sinners' hotel, and as long as the wine lasted we had a----of a time."  Unfortunately for the Weston family, things "just as we wanted 'em" included expensive damage.

"Carpets were cut up, soiled, and besmeared with dirt; valuable paintings were cut and their frames broken; costly bits of statuary were destroyed; bric-a-brac had been hurled through the glass doors of bookcases, and the walls of the rooms had been disfigured by the bloody heads of chickens and other fowl that were killed and cooked in the house."

To keep warm, the squatters broke up furniture for firewood.   Jewelry and other valuables were sold in nearby towns and, as described by The Times, "Every room in the house had been turned topsy turvy."  And the problem of bathroom hygiene was solved when "Much costly underwear and wearing apparel, which had been put into cedar closets for protection, was cut into shreds and besmirched with the filth of the marauders."

The Weston family remained in the West 144th Street house for about two decades.  By 1913 they had moved permanently to the Milton estate.

In October 1916 the Pecks transferred title to Kate A. Hastings.  Like the Pecks, Kate and her husband, Charles S. Hastings, had purchased multiple properties in the area in 1892 and continued to manage leased residences.  In August 1917 she leased No. 454 to Lindsay S. Perkins who had become a minor celebrity for toppling a German spy and terrorist ring.

Perkin's early life held no hint of the colorful career as a Secret Service agent to come.  A short story writer, he became city editor of Georgia's The Macon Telegraph in 1889.  Two years later he relocated to Washington DC as a Patent Office employee. Then, with the outbreak of World War I, he joined the Secret Service. Although the U.S. had not yet entered the war, spies and saboteurs were a threat to American munitions plants, ships carrying supplies to warring countries, and such.

The agency was closely monitoring the moves of a group of German businessmen and diplomats in 1916.  They were suspected of conspiring to blow up of the Welland Canal connecting Lake Erie and Lake Ontario in 1914.  Among them was Captain von Papen, Military Attache of the German Embassy, and his secretary, Wolf von Igel, described by Current History and Forum later, in October 1917, as "a large, suave man of Teutonic aspect."

On April 16 Linsday S. Perkins entered von Igel's supposed "advertising" office at No. 60 Wall Street.  A month later Information: A Monthly Digest of Current Events wrote "Before submitting, von Igel struggled until the Federal agents were compelled to draw their revolvers."  According to Current History and Forum, when their guns were drawn, von Igel shouted "This is German territory.  Shoot me and you will bring on war!"

The New York Times said Perkins "is accredited with the capture of Wolf von Igel, a German spy."  And Information reported that his involvement in the Welland Canal plot and "many bomb outrages on munition carrying ships...were described by a high Federal official as the biggest haul made by the government since the activities of the agents of the Central Powers in this country were first uncovered."

Five months before the 54-year old Lindsay moved into No. 454 he was involved in defusing another nearly disastrous plot.  The German ocean liner Friedrich der Grosse was moored at Hoboken.  Lindsay and other agents stormed the ship where a bomb making factory was being operated.  Within 12 days workers had created 250 bombs, intended to be smuggled onto ships carrying food to the allies.  Five German insurgents were arrested.  On March 16, 1917 Lindsay S. Perkins testified in United States Court, identifying two of the spies.


The Secret Service agent leased No. 454 until around 1920, when he retired to his farm in Seat Pleasant, Maryland.  (He did not remain retired, however; he returned to the State Department as a Russian and Spanish translator in 1931.)

By the Depression years John H. Fay lived here with his wife, Elizabeth, and their adult son, Thomas.  Elizabeth and her son stayed on for a few years following John's death in the house on May 5, 1931.  The following year Thomas was a witness in court over an annoying incident.

He had been a passenger on August 2, 1932 in the automobile of 24-year old friend Arthur J. McQuade, son of former judge Francis X. McQuade.  Following in his father's footsteps, Arthur was secretary to General Sessions Judge John J. Freschi.

When McQuade parked near the intersection of 54th Street and Broadway, he was given a ticket by Patrolman Charles L. Klkia for obstructing the crosswalk.  The young men protested and all three ended up in traffic court on October 18.

Both Fay and McQuade insisted that 'pedestrians had plenty of room to move past the parked automobile," according to The New York Times the following day.  The policeman "admitted they could get past, but insisted part of the automobile was on the crosswalk."  It may have been because of Arthur McQuade's ties to the courts or simply the judge's frustration with Officer Klika's pettiness; but Magistrate Aurelio dismissed the charges.

The last occupants of No. 454 as a private home was the Thomas Family.  Anthony B. Thomas and his wife, Marie, had three sons, Francis, Robert and John. Francis graduated from West Point in January 1943 with the rank of Lieutenant; and Robert was a Private First Class in the army.

Francis A. Thomas was deployed to Del Rio, Texas following his graduation.  Tragically, just four months later the 24-year old died suddenly of unexplained causes there.  His funeral was held in the West 144th Street house on May 10 and he was buried in the United States Military Academy Cemetery at West Point. 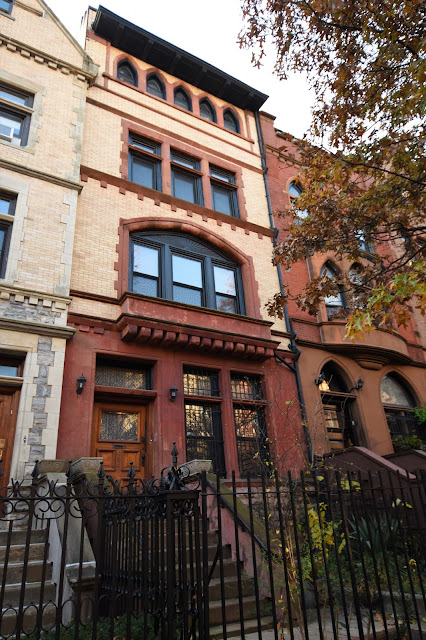 In 1952 the house was converted to "furnished rooms."  Today there are seven apartments in the building.  Outwardly, however, other than replacement windows, the charming Victorian is little changed.