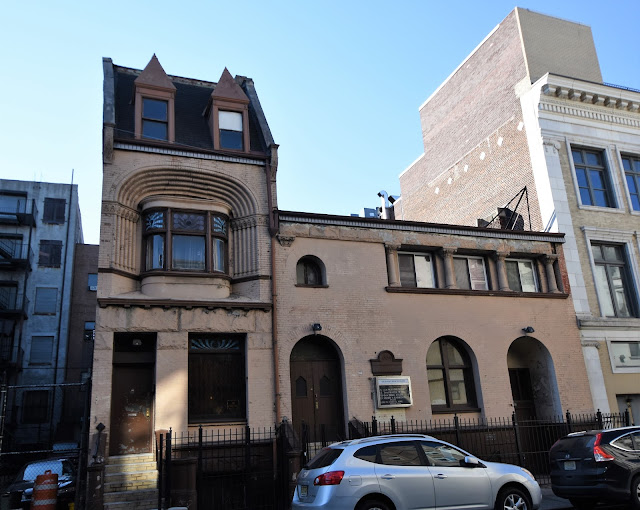 George W. Wallace was, perhaps, New York City's premier dance instructor in 1888.  Four decades earlier, in 1841, he had served as Master of Ceremonies at the inaugural ball of President William Henry Harrison; and in 1893 he would do so again for President Grover Cleveland.

The sons and daughters of upscale Victorian households underwent rigorous training in deportment and social interaction--including dancing.  Wallace opened his first class in 1871 and operated a highly-successful dancing school at No. 20 West 59th Street, steps away from the mansions of Fifth Avenue.  But now he looked far to the north for another studio.

In 1879 elevated trains extended north into Harlem, turning the once rural hamlet into a vibrant suburb.  In 1888 George W. Wallace commissioned architect George Keister to design a dance school at Nos. 80 and 82 West 126th Street, with an adjoining house at No. 78.

Completed in 1889, the buildings were unmistakably separate; yet harmonious.  The school was a delightfully unbalanced blend of Romanesque Revival and Italian villa.  The brick-faced facade featured arched openings at the first floor, and a grouping of windows on the second behind chunky stone columns which gave the effect of a loggia.  Above a course of rough-cut stone a tiled hip roof rose.


The Wallace house vied for attention.  While the two buildings had identical stone stoops and the treatment of the brick-and-stone basement levels was the same; the similarities ended there.  The parlor floor was highly understated, with crisp rectangular openings unexpected in Romanesque Revival.  Brick gave way to brawny blocks of stone below a surprising, stylistically-incongruous bracketed cornice. 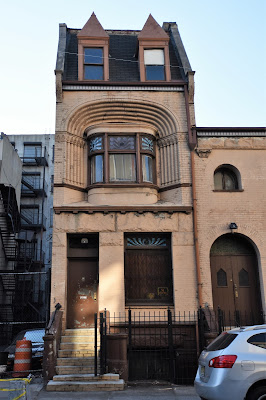 Keister made up for the restrained parlor floor at the second.  An ecclesiastical-looking arch was composed of tightly-packed medieval columns, executed in bull nose brick, which morphed into the ribs of the arch.  As the arch recessed into the facade, the bowed bay burst forward in the opposite direction, creating a stunning display.  Here, as on the parlor floor, the transoms were filled with vibrant stained glass panels in the form of stylized peacock tails.  Two dormers with pyramidal caps thrust through the steep full-height mansard.


George Wallace and his wife, Isabella, had two sons and a daughter.   The studio building doubled as a rentable entertainment venue.  The New-York Tribune noted "The building contains a large hall, bowling alleys and studios."  When dance classes were not being held, Wallace leased the space, calling it "The Ellerslie," for dances, receptions and other gatherings.  It became a favorite for bicycle clubs, known as "wheelmen."

On December 4, 1893, for instance, The New York Times reported that the "Riverside Wheelmen will hold a reception on Thursday night at the Ellerslie...Dancing will begin at 9."  Two months later the newly-formed New-York Wheelmen held their first reception here.  The Times noted "This club is a young organization, but the reception was one of the most successful of any given by wheel clubs this season."  The newspaper explained the success saying "President J. Hoff Ellison worked like a beaver to make every one have a good time."

Before long the Harlem Wheelmen were using the space for its monthly receptions.  "These affairs are among the pleasantest of the season in cycling circles," said The Times on February 6, 1896.

But the Ellerslie was not restricted to cycling clubs.  On the evening of June 2 1898 the commencement exercises of the Barnard School for Girls were held here.  And that same year the Metropolitan Third Church of Christ, Scientist, began using the vast room on Sundays for its mission church.  It would continue leasing the space until 1904.

By 1898 the Wallace family had left the 126th Street house, leasing it to Stephen Wyckoff.  Despite his impressive surname--the Wyckoff family first appeared in the New York area in the 17th century--he seems to have been struggling financially.  His name appeared on the City's list of delinquent tax payers for 1898.


The Wallace School remained next door and the Wallaces retained ownership of both structures, the titles being in Isabella's name.  The Ellerslie was renamed The Ellsmere by 1906; and was increasingly popular for large events, like the 10th anniversary celebration of school commissioner John A. Wilbur and his wife in November that year.  The bowling alleys made the venue a perfect choice in May 1909 when the Colonial Bowling Club held its "eighth annual shirtwaist dance" here.


By 1914 George Wallace turned over operation of the dance school in the Ellsmere to Roderick C. Grant, who advertised "Private and Class Instruction in all the Modern Ballroom Dances."

As the years passed Isabella leased the building to various managers and the Ellsmere continued to be a popular venue for weddings, receptions, dinners and dances--and at least in one case, a funeral.

Isabella died on April 12, 1927, and George died two years later, on May 28, 1929.  Before the year ended the Ellsmere was gone, replaced by George and Connie Immerman's The Plantation Club, which opened in December.  The nightclub was intended to compete with the popular Cotton Club.


Highly offensive in its racist premise today, only white patrons were admitted in; yet the entertainers and staff were all black.  Edward White, in his 2014 The Tastemaker, Carl Van Vechten and the Birth of Modern America. described the "farcical antebellum fairytale" interiors.  "Log cabins and picket fences dotted the club's interior while African-American women in the role of dutiful, chuckling mammies tossed waffles and flapjacks on demand for hungry white customers."

It had cost the partners $80,000 to design and outfit the club--more than $1 million today and a huge outlay in the first months of the Great Depression.  The New York Times wrote "In the centre of the big floor, approached by steps from the street, was a large dance floor of parquetry, surrounded by mirrors.  Over the floor was a blue sky effect, filled with stars and moons which glittered at night above the dancers' heads.  At one end was a 'Show Boat' tableau, and tiny representations of plantation cabins were set about the walls."

To compete with the Cotton Club, the Plantation Club needed headliner entertainment.  The owners lured Cab Calloway away from its competition.  Within weeks the Plantation was being described by The New York Times as "one of the best known Harlem night clubs, and after-theatre rendezvous of white amusement seekers."  But the theft of one of his best draws was a move that greatly displeased Owney Madden, the mobster who ran the Cotton Club.

At around 11:00 on the morning of January 16, 1930 there were four employees working in the Plantation Club--the custodian John Sallitch, watchman Harry Jones, the bookkeeper Mildred Korn, and a painter, Morris Gillian.  When the doorbell rang, Jones opened it to find a man in a white coat accompanied by eight others, all "well-dressed."  Suspicious, Sallitch demanded "What do you want here?" and the white-coated man answered "We're Federal men, and we're looking for narcotics."

They were, in fact, thugs sent by Owney Madden.  The four employees were herded into the basement and the Plantation Club was wrecked.   Knives were used to slash the upholstered furniture, the lighting fixtures were smashed, and crowbars were used to rip up the dance floor.

"One man played destructive scales up and down the piano keys with a pickaxe," reported The Times.  "Mirrors were shattered and the 'Show Boat' tableau was demolished."  The gang broke into the dressing rooms and slashed 200 costumes to shreds.  Before they fled, dropping their tools to the floor, the goons had done an estimated $25,000 in damages.

The black-owned newspaper The Afro American was elated at the destruction of the grossly racist haunt.  "Harlem is laughing--long and loud.  It refuses to be segregated in its own home."


The Plantation Club owners were determined to bounce back.  The day following the attack they announced that workmen had already been hired "and started rushing repairs in the expectation of reopening tomorrow night."

Cab Calloway, incidentally, thought it best to return to the Cotton Club.

On February 21, 1940 all the furniture and fixtures in the building were sold at auction.  By the early 1970s both of George W. Wallace's buildings were taken over by the Baptist House of Prayer of God in Christ.  The congregation, founded in 1909, remains here. 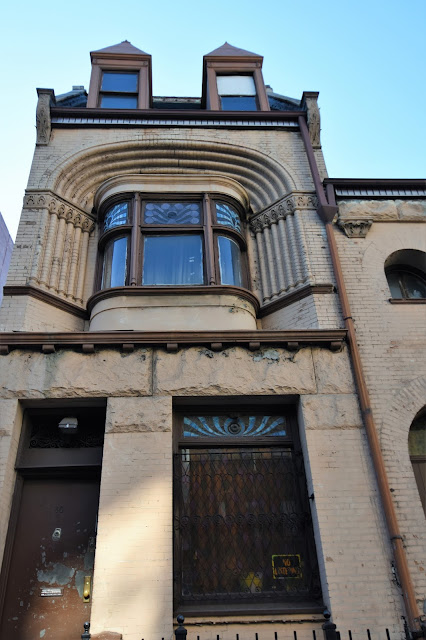 At some point the tiled roof of the former dance studio was lost.  An industrial door barricades the house, and both buildings have received an unflattering coat of beige paint that hides the contrast of brick and stone. Neverless George Keister's innovative takes on Romanesque Revival shine through; and those exceptional stained glass panels survive.

photographs by the author
many thanks to Sandra Draves for suggesting this post
Posted by Tom Miller at 1:40 AM