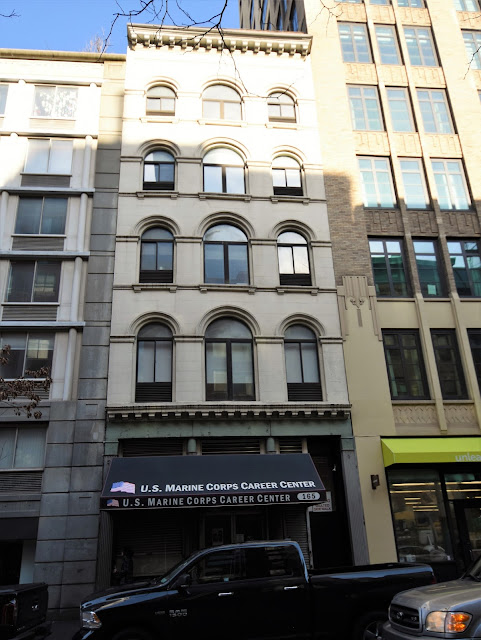 In the decade before the Civil War the surviving homes along Chambers Street were, for the most part, being operated as boarding houses.   Commerce had pushed the moneyed families northward and one-by-one the brick-faced houses would be replaced by loft and store buildings.

The boarding house at No. 165 Chambers Street catered to financially-comfortable tenants.  An advertisement in The New York Herald on November 9, 1854 touted "Parties wishing a pleasant private house down town, can obtain such, with desirable rooms, suitable for families and single gentlemen, on moderate terms, by early application."  Transient boarders were charged $1.25 per day, just over $35 in 2017 dollars.  "Day boarders" paid $3 a week.  The advertisement noted one amenity we would take for granted today: "Use of bath."

Three years before the ad appeared John S. Martin had established his "butter and cheese house," John S. Martin & Co.   The firm started out in the Erie Building, roughly two blocks away.   In addition to his successful business, Martin got in on the real estate game.  By the end of the century he would own multiple Tribeca buildings--at least ten on Chambers Street and five on Greenwich Street.

Among his first was No. 165 Chambers, completed by 1859.   Martin spared no expense in what would be his company's home for years.  The New-York Tribune noted its "white marble front."  A cast iron storefront of fluted Corinthian columns and pilasters supported a projecting modillioned cornice that introduced four identical floors of arched openings separated by shallow pilasters.  The central windows were slightly larger, adding character to what would otherwise have been a rather hum-drum facade.  The sills, connected by sculptured bandcourses, sat on dainty scrolled brackets.  A blank fascia board and understated cornice brackets echoed the residential designs of a generation earlier. 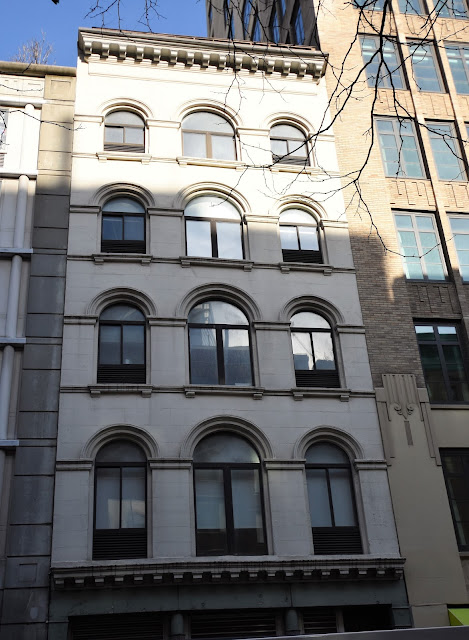 The retail space was home to what may have been a pharmacy of sorts.  On January 14, 1859 the owner advertised "Hutchings' Life Exhilarant," touted as the "best remedy in the world for dyspepsia [and] nervous weaknesses of all kinds."    The tonic was also guaranteed to "restore wasted strength with magical promptness and wonderful permanence," to "brace up the stomach to the complete performance of its duties," and to remedy "general debility of the various organs."  A large bottle could be had for $1, or $30 today.

Among Martin's tenants on the upper floors was Charles Baker, Jr.  The cigar maker's financial success was reflected in the personal ad he placed in The New York Herald on June 25, 1859.  "Yacht for Sale.  Full schooner rigged 35 tons register; cabin and kitchen furniture in complete order; is very able and easily handled; canvass used but one season.  Address Chas. Baker, Jr., 165 Chambers street."

The following year, apparently exasperated with the condition of Chambers Street, Baker chipped in with other businessmen to hire their own street cleaner.  Then he signed a petition to the Mayor that urged him to test "Mr. Smith's" street-sweeping machines.  Saying that the present methods were "inefficient and extravagant," the merchants felt "that the success of the enterprise will add largely to the health, comfort and prosperity of our metropolis."

Another of Martin's initial renters did not last long.  Isaac L. Hunt manufactured cleavers and knives used by butchers, restaurants and hotels.  On April 2, 1861 an auction lasting several days was held in his space.  The announcement of the sale, the stock of which was advertised as "Heavy and Shelf Hardware, Cutlery, &c." reached as far away as Richmond, Virginia.

In the meantime, John S. Martin was sustaining his own highly successful trade.  The scope of his business was evidenced by the amount of the payment he mailed to Kierhmon & Holmes in 1863.  The $568 check would amount to more than $11,000 today.

The firm never received the envelope, however.  It was purloined by Ferdinand M. Miaglia, a Lieutenant in a State artillery regiment.  He forged the endorsement then took it to the high-end jewelers Ball & Black where he purchased a gold watch.  The crime was soon discovered when Ball & Black tried to pay a creditor, Richmond & Holman, with the same check.  The soldier was arrested and held in the Tombs Police Court.

By 1869 the "color manufacturers" D. F. Tiemann & Co. had its wholesale offices in the building.  The firm had an extensive plant far to the north, in the neighborhood of Manhattanville.  Although known for its paints and dyes, by November 1867 it had introduced a household product, Tiemann's Laundry Blue.  Harper's Bazaar touted "This Blue is manufactured expressly for Washing purposes...and, being perfectly pure and free from Acid, it supplies a want which has long been felt, a Blue which will not injure the Clothes."

John S. Martin moved to another of his buildings, this one at the corner of Chambers and Greenwich Streets, in 1872.  He retained ownership of No. 165 and continued leasing to, mostly, tenants in the produce or dairy business.  One of these looked for a partner in 1875; although he was apparently reticent to reveal his identity.  His advertisement in The New York Herald explained:

One tenant not involved in the produce trade was broker James E. Morris.  Among his clients in 1883 was the wealthy steamship captain Thomas H. Morton, commander of the Pacific Mail steamer Colon.  Before Morton sailed on Monday, September 10 that year, he gave his wife, Elizabeth, $3,000 to take to Morris, payment for mining stock.

Not only did Elizabeth leave the house on September 15 with the large amount of cash; but she wore (some might say foolishly) a diamond breast pin on her black silk suit, diamond earrings and three diamond rings.  The jewelry, "over half of which was exposed," according to her adult son Robert later, was valued at around $5,000.

She showed up at Morris's office at around 1:00; but because her husband's presence was necessary to complete the transaction, she left a half an hour later "in good spirits" but with the money.  In all, she stepped onto Chambers Street carrying $8,000 in cash and diamonds--a tantalizing $195,000 in today's worth.

Elizabeth Morton disappeared.  The suggestion that she had slipped away was scoffed at by family and friends.  Her neighbors told a reporter that she "has been known among them as a woman of the most irreproachable character.  Her relations with her husband are said to have been most affectionate, and she has always been a good mother to her two sons."

The Times reported "The only theory which Mrs. Morton's friends are able to form is that some one, tempted by the display of her jewels, or, possibly, being aware of the amount of money in her possession, drugged and robbed her, or perhaps took her life."

The women was found in New Jersey some days later at the home of an acquaintance and still wearing the same clothes.  The money and jewels were intact; but the reason for her disappearance was unclear.


In 1890 F. M. Bower & Co. was in the building, manufacturing on an upper floor while operating its "large store" at street level.  According to New York, 1894, Illustrated, the firm dealt in "every kind of tool, pan or machine used by bakers and confectioners."  But it was perhaps best known for its "motto papers."  These were waxed paper squares used to wrap confectioneries.  Printed with wise maxims and the retailer's name, they were popular among consumers for their pithy sayings and among bakers and candy makers for the inexpensive advertising.

F. M. Bower & Co.'s improvements to printing motto papers toppled the near monopoly previously held by Mexican and Central and South American printers.  New York, 1894, Illustrated wrote "it is refreshing to learn of a business run by American genius and backed by American capital which has not only driven foreign competition from the home field, but has itself entered upon foreign territory."

Butter merchants Russel, Crego, & Son was in the building at the same time.  In 1891 it drew attention by having a telephone installed.  While the move showed confidence in the relatively-new invention, one can assume it sat mostly unused; since it would be several years before the telephone was a common piece of office equipment.

The firm had been the subject of less positive press two year earlier when its "confidential clerk," William F. Dickie had embezzled $7,000.   He had been with the firm since 1884, but did not begin forging checks until 1888.  In October 1889, when discovery seemed inevitable, he fled, sparking a months-long  manhunt.  Shortly after his disappearance, his wife moved to Rome, New York.  Investigators followed.

Five months later she prepared to move again.  When she packed up household goods and sent them to a depot to be shipped to Montreal, detectives were closed behind.  The labels were addressed to "Mr. Green."  When William Dickie appeared in the Canadian station in April 1890 claiming the boxes, he was arrested.  Following an extradition fight, he was brought to New York and tried.  On July 18, 1890 he was sentenced to nine years and six months in the State Prison.

Apparently the management of Russel, Crego & Co. was not happy with the severity of the sentence.  On New Year's Day 1892 a new trial was ordered.  The courts conceded that Russel, Crego & Co. "was improperly allowed to testify as to a shortage," and while the new trial would "have no bearing" on the earlier decision of guilt; it would increase the financial amount of the crime.


Frank M. Bower left No. 165 Chambers Street on the evening of November 9, 1891 headed home to Brooklyn.  While waiting for the train at the Brooklyn Bridge platform, he complained of dizziness.  A police officer named Farrell caught him as he collapsed.  He was taken to the women's waiting room and an ambulance was called.  Just before it arrived he uttered his last words "I want to get home to my wife and child."

The F. M. Bower & Co. firm continued on, and was still making and selling bakers' and confectioners' supplies here through the turn of the century.  On May 6, 1897 fire broke out in the basement of No. 163 Chambers Street.  In spread into the F. M. Bower & Co. store, causing damage to the stock.

John S. Martin died in 1905.  Within four years his son, William V. Martin, sold the butter and cheese business, deemed by The American Produce Review in 1909 "among the leading houses in the trade."  The following year he began selling off his substantial real estate holdings, including the "white marble front building" at No. 165 Chambers Street.

By 1915 the the produce and dairy trade was gone from the building.  Instead industrial tenants like the Lightning Hose Rack Co., and the Mineralized Rubber Co. moved in.  In September 1920 the Heermance Storage and Refrigerating Company purchased the building.  In 1922 it leased space to the Electric Hose & Rubber Co., and the Chambers Pharmaceutical Co.

Various small companies would come and go throughout the next half century.  One, the Kwik Vu Film File Co. sold transparent acetate files made to protect 35mm film.  In the 1960s M. H. Greene Co., Inc. operated in the building.  A reminder of earlier tenants, it dealt in "imported food products."

Tribeca experienced a renaissance in the last quarter of the century.  In 1987 No. 165 Chambers was joined internally with the new structure at No. 303 Greenwich, as well as Nos. 167 Chambers and 147 Reade Streets.   Part of the high-end residential conglomerate of buildings called The Tribeca, No. 165 Chambers Street now has one apartment per floor, with an elevator opening directly into each unit. 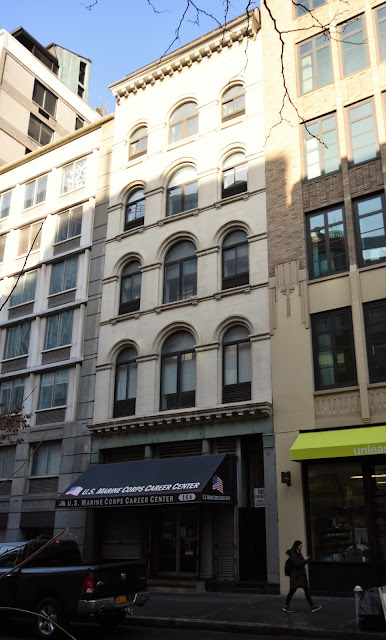 From the street, however, changes are less dramatic.   The cast iron storefront survives (minus its capitals), the windows have unsympathetic replacements, and the marble has been given an inexplicable coat of gray-white paint.  But the integrity of the 1859 design manages to persevere.