In the 1850s the northern suburb which would be known as Chelsea was well-developed.  Land that had been rural only 30 years earlier was now dissected by streets and avenues, lined with brick and brownstone-faced homes.

A public primary school was erected at Nos. 214 to 216 West 17th Street to accommodate the growing population.  In 1854 the enrollment of Ward School No. 11 included 596 boys and 568 girls.   But by 1875 the building was no longer adequate.  A new structure was built a block away at No. 314 West   17th Street; and the old school was replaced by a tenement building.

The three-story apartment building, owned by William J. McCarthy, filled with tenants of modest means; many with Irish surnames.  In 1876 sisters Lizzie F. and Mary J. Norcott shared an apartment.  The women both taught in the boys’ department of Grammar School No. 8 at No. 66 Grant Street.

One amazing resident here was centenarian Mary Clements.  The spry widow had nine children and had lived for years with her seventh son, Robert, at No. 678 10th Avenue.  He vowed never to marry while his mother lived.  When Robert died in August 1890, she moved to No. 214 West 17th Street with her 84-year old son, James.

Vigorous and sharp, the 103-year old woman walked to the corner store at around 2:00 on the afternoon of February 28, 1891 to get coffee.  Upon her return she mentioned that she felt faint.  The Tyrone Constitution reported “She simply sat down on a lounge and died, just as a clock would stop when it runs down.”

Nearly two years later, on March 23, 1895 The New York Times reported on the planned Siegel, Cooper Department store a block and a half away on Sixth Avenue.  The massive 85,560 square foot store would require an auxiliary facility as well.  Well-heeled Victorian shoppers rarely concerned themselves with taking their purchases with them.  And, in fact, the cumbersome size of packages containing large hats and gowns made such an endeavor nearly impossible.  Large emporiums therefore operated their own delivery services.

Real estate operators Simon Adler and Henry S. Herrmann demolished the 17th Street tenement building to replace it with a six-story brick stable.  On July 13, 1895 the Record and Guide reported that Siegel, Cooper & Co. had leased the planned building "for a long term of years.”  The journal later said Adler & Herrmann’s stable was built “for occupancy by the Siegel-Cooper Co.’s extensive outfit of horses and wagons.”

Five floors of beige brick were trimmed in brownstone and ruddy-colored terra cotta.  They sat on a cast iron base where wide vehicle bays bustled with the comings and goings of horse-drawn delivery wagons.

With minimal alterations, the stable was converted to Ketterer & Kobler’s business wagon factory.  Founded by Charles Percival Ketterer, the firm specialized in designing and manufacturing “specialty wagons.”  When the American Telephone and Telegraph embarked on its ambitious project of stringing telegraph lines across America, it turned to Kettering & Kobler for its vehicles.  Among the custom wagons it ordered were six-man sleeping wagons, kitchen and lunch wagons, and foremen’s wagons.

But, as had been the case with Siegel-Cooper; the 17th Street facility became insufficient.  In 1904 Ketterer & Kobler laid plans for its own factory building two blocks away at Nos. 211-215 West 19th Street.

When Ketterer & Kobler moved out in 1905, John Conboy signed a ten-year lease on the 17th Street property (still described as a stable by the New-York Tribune).  The total rent was set at $60,000—about $167,000 a year in today’s dollars.  Conboy operated the building as both a stable and warehouse.

By the 1920s horses had almost completely disappeared from the streets of Manhattan.  In 1928 the old stable building, now owned by the Ascher Realty Corp., was converted to an automobile garage.  Trouble came in 1941 when members of the Garage Washers and Polishers Union went on strike.  Their methods went beyond picket lines, extending to violence.

On March 29, 1941 the Metropolitan Garage Board of Trade included the 17th Street facility in its list of garages “crippled” by the hostility.  The board told reporters that “garage owners trying to perform a few simple services for customers were attacked by marauding bands who in some instances overturned cars.” 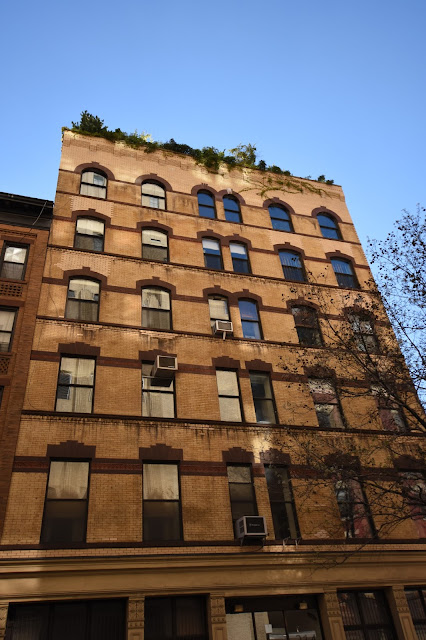 As the building continued to be used as a garage throughout the coming decades, its façade was little changed.  Then in 1981 it was converted to apartments—two per floor.   The renovation included a façade cleaning and a sympathetic transformation of the ground level to a residential entrance and lobby.