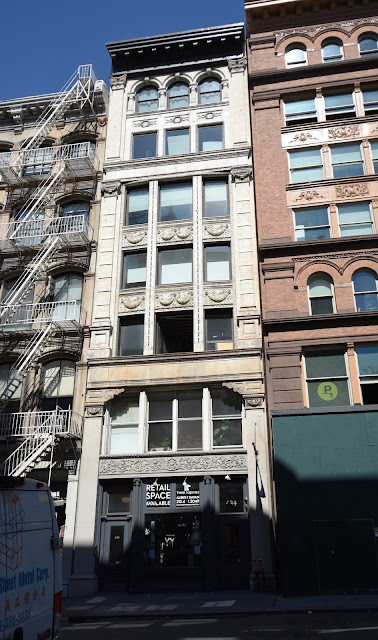 The death of 69-year old Thomas Eddy died on September 16, 1827 was widely lamented.  Eddy was highly involved in the charitable institutions of New York.  He was for years a governor of the New York Hospital and was responsible for the establishment of the Lunatic Asylum.  He was a staunch abolitionist and a commissioner of the construction of the Erie Canal.

Prior to his funeral in his house at No. 424 Broome Street, his widow received a letter from Governor De Witt Clinton which read, in part, “Permit me to mingle my tears with you, and to offer to you and your family my heartfelt sympathies on the loss of your excellent husband and my invaluable friend.”

The block where the Eddy home stood would remain fashionable for at least two decades.  In the 1840s the Powers family lived at No. 424.  Thomas J. and William P. Powers were both attorneys and shared an office at No. 49 Wall Street.

But by the time of the Civil War commerce had invaded Broome Street.  No. 424 had been converted for business and in 1862 the ground floor was home to the clothing store of A. H. McArthur.  That year the proprietor had difficulties with a relative and employee—Alexander McArthur.  Alexander held the position of “foreman” in the store.  The owner alleged “that the sum of $45, belonging to him, was appropriated by the accused to his own use.”

Alexander McArthur was arrested on January 8, 1862.  He pleaded guilty and was held awaiting trial.

Within the decade the neighborhood became the center of the upholstery trimmings industry.  Victorian portieres, mantel scarves, and furniture were generously adorned with braiding, fringe and decorative tassels.   The converted house at No. 424 saw two such dealers.  In 1865 E. D. L. Meyer & Co, “dress trimmings factory and salesroom” was here.  It would remain in the building for years, becoming L. Meyer & Co.  Also here was D. Prosnitz, “cords, ornaments, and tassels.”

Unrelated was P, Ayres & Sons.  Phinny Ayres and his son Samuel dealt in “paints, oils, and glass” and apparently moved into the photographic supply business as well when that technology evolved.  In 1881 the store gave out promotional pamphlets posing as a city guidebook, Old Landmarks, or How to See New York.   It included advice to tourists one might take to heart today, such as “Avoid being too free with strangers…If you are obliged to make inquiries on the street, apply to a policeman or go to a respectable place of business.  Avoid all crowds, especially at night.  Careful attention to your own business will insure freedom from annoyance or interruption.”

By the last decade of the 19th century the most of the old brick houses along Broome Street had been replaced with modern loft buildings.  In the 1890s the brothers Samuel and Henry Corn were rabidly purchasing old homes and erecting such structures.  They were highly responsible for changing the face of lower Fifth Avenue and the neighborhoods which would become known as Soho and Noho.

On the single day of November 1, 1894 The New York Times real estate column reported on three important deals involving the Corn brothers.  Among them was the sale by the Ten Eyck Powers estate of the three-story brick No. 424 Broome.  The Corns paid $40,000 for the old structure—over $1 million in 2015 dollars.

Although two weeks later it was reported that the Corns had sold No. 424 to Julius Lowenthal; that deal apparently fell through.  The Corns commissioned architect Louis Korn to replace the old house with a factory and store building.  The architect had just completed designs for a handsome loft building for the Corn brothers replacing two old mansions at Nos. 91 and 93 Fifth Avenue.

Construction on No. 424 Broome would not commence until 1896.  The 25-foot wide building was completed a year later.   The handsome Renaissance Revival design was executed in stone, brick and cast iron—the latter allowing for vast expanses of glass.  Festooned capitals on the pilasters, wreaths, and garlands ornamented the seven-story building.  Playful s-shaped double volutes served to uphold the entablature at the second floor.  At ground level a cast iron storefront featured prim engaged Ionic columns on fluted bases, over which was an ornate foliate frieze. 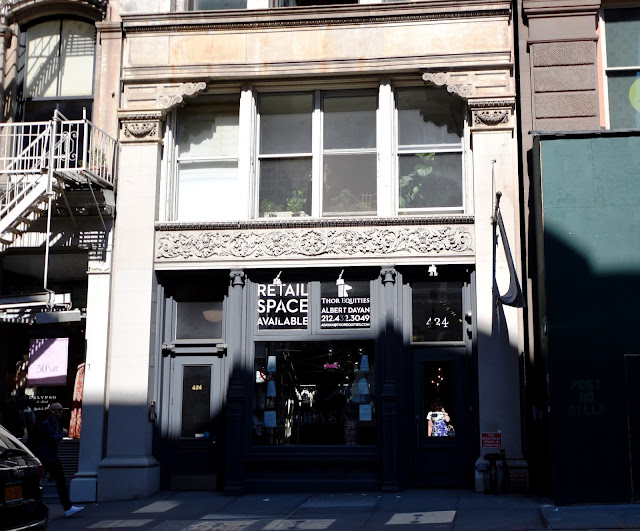 The stationery store would remain in the building at least until 1908.  By then the original tenants of the upper floors were gone, replaced by similar firms—Kahn & Feltman, “silk yarns;” the Novelty Dress Skirt Co., Isaac Brill who manufactured curtains, and George Munster, whose company made pocketbooks and other items.

The apparel and trimming firms made up most of the tenant list through the World War I years.  But by 1920 printing companies had taken over.  That year printer Louis A. Reid was in the building, as was Geo. B. Hurd & Co., makers of playing cards.

Another printer, Glicksman Press, saw opportunity when Charles A. Lindbergh landed in Paris on May 21, 1927 following his 33-hour non-stop flight from Roosevelt Field on Long Island.  On June 5 The New York Times reported “Although there is no regular air mail between New York and Washington, air mail addressed in New York to Captain Charles A. Lindbergh will be transported by air in ample time for delivery to Lindbergh on arrival, according to a message received yesterday by A. Litton of the Glicksman Press, 424 Broome Street, from Postmaster General New.  Litton's company will begin selling today a souvenir post card to those who wish to send formal greetings to Lindbergh.”

The Soho district suffered during much of the 20th century and in the 1940s No. 424 was home to machine parts firm B. Pletman Devices, the Aristocratic Whipper Corp, maker of cream whippers; and the Modernistic Fixture Co.

Then the neighborhood was discovered by struggling artists.  The vast lofts with expansive windows were cheap and made perfect studio and living spaces.  In 1981 No. 424 was converted to “joint living and working quarters for artists.”  The transition from industrial to artsy was not always smooth, however.

No. 424 Broome shared a light well with the still-industrial building at Nos. 418-422.  The residents repeatedly lodged complaints with the city concerning “a constant roar” from exhaust fans as well as dry-cleaning fumes.  When officials continuously found the businesses next door in compliance with the law, the co-op residents of No. 424, known as the Broome Street Artists Corporation, filed suit in State Supreme Court.

In addition to seeking an injunction to stop the noise, water damage (purportedly caused by a roof-top air conditioning unit), security problems, and fumes, they asked for $10 million in damages. 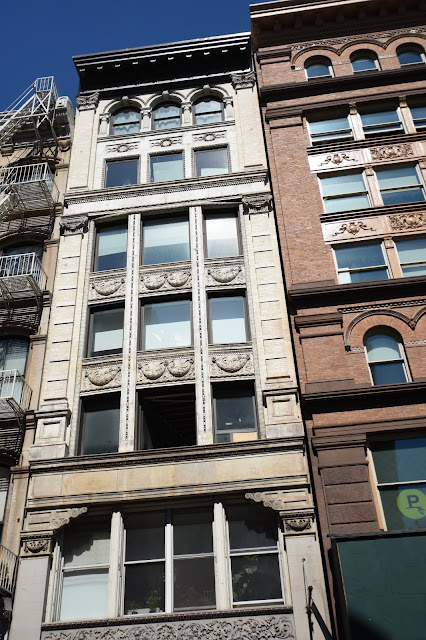 The ugly affair was eventually settled.  In 2012 the high-end home-furnishings shop Ankasa opened in the architecturally-unaltered ground level store.  The upscale shop and the now multi-million dollar co-ops above exemplify the ongoing change in the Broome Street area.

photographs by the author
Posted by Tom Miller at 11:05 PM