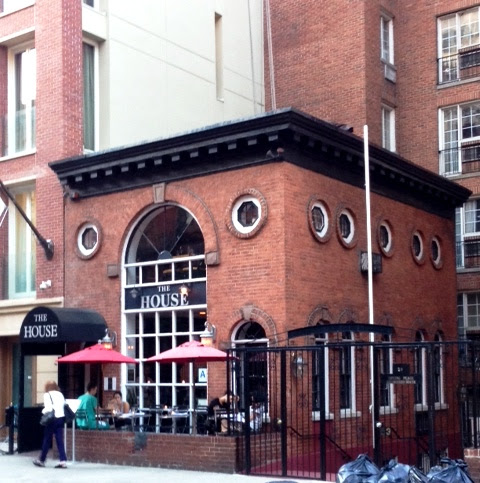 As the 1890s approached, the glory days of Union Square as an elegant residential neighborhood were gone.   Its mansions had been converted for business or razed and replaced by modern commercial structures.  But on the streets branching off the square some relics remained—once-fashionable homes, now operated as boarding houses, and an occasional carriage house.

One such survivor was the two-story brick stable at No. 121 East 17th Street.  The building once housed the horses and vehicles of one of the Square’s wealthy residents.  It was close enough for convenience; yet just far enough away that the smells and noises would not offend.

Unlike most private stables which lined up shoulder-to-shoulder, a service alley ran along the east side of No. 121—providing the unusual luxury of sunlight-providing openings on the side wall.   A vast two-story arch enveloped both the double bay doors and the upper window.  Following the traditional stable arrangement, it was flanked by a doorway to the upper story and an window of the same size.  Below the generous, bracketed cornice, a row of brick-framed oculi wrapped the building, each sitting directly above an arched window.

But in the 1880s the millionaires around Union Square were largely gone and their carriage houses had been converted or demolished.  By 1888 No. 121 East 17th Street had been remodeled by Philip Martiny for his studio.  The sculptor was not the first to realize the potential of the utilitarian structures.  The high ceilings and wide bays were perfect for working on large pieces.

Born in Alsace on May 19 1858, he once told a reporter “People have called me Swiss, and Italian, and German—everything but what I am—a Frenchman.”  He studied under Eugene Dock, and then left home at the age of 20 to come to New York.   Years later he said “I was lucky from the first.  I was taken into the studio of a great sculptor—the greatest sculptor in America to-day—St. Gaudens.”

It would appear that the 17th Street studio was Martiny’s first after venturing out on his own.  It was here that Martiny created the massive sanctuary lamp for St. Paul the Apostle Church in 1888.  Stanford White had given him the designs for the lamp.   White would work with Martiny several times; having him execute the south doors of St. Bartholomew’s Episcopal Church, for instance, and a bronze figure of Aphrodite for Oliver Hazard Payne’s luxurious yacht decorated by White.

Before the turn of the century Martiny moved his studio to another converted stable—this one in Macdougal Alley near Washington Square.  The 17th Street studio was taken over by another sculptor, George T. Brewster.

Brewster would become best known for his sculptural portraits and figures for war memorials.  Working from the former carriage house, he produced commissions that included the figure of Victory for the Indiana Soldiers’ and Sailors’ Monument in Indianapolis; the statue of Stephen Decatur on New York City’s Dewey Triumphal Arch; and a bas-relief portrait of Augustus Saint-Gaudens for the National Portrait Gallery in Washington D.C.

In the years preceding World War I Pepe & Brother was busy transforming vintage houses in Greenwich Village into modern studio buildings for artists.  Vincent Pepe was the leading force in the partnership.  In an article written for the Real Estate Record and Builders’ Guide on August 5, 1916, he explained his concept. “Owners of real estate have realized that in order to obtain the desirable class of tenants, old buildings must be remodeled artistically and efficiently in order to meet the requirements of the ‘artist colony’ which has been firmly established in the district.”

By 1918 the Pepe & Brother had ventured to the east side of Fifth Avenue.  They remodeled No. 121 East 17th Street to artists’ studios, and on November 30, 1918 The Sun reported that the brothers had leased a studio to playwright and poet Percy MacKaye.

MacKaye was already well-established in American theater when he took the studio; having already written the plays The Canterbury Pilgrims in 1903; Sappho and Phaon and Jeanne D’Arc, in 1907; perhaps his most famous work, The Scarecrow, in 1908; and Anti-Matrimony in 1910.

While living and working at No. 121 East 17th Street MacKaye collaborated with Reginald De Koven on the three-act folk opera Rip Van Winkle, which was produced in 1919.

The quaint little building was briefly leased by the German Masonic Temple Association in 1933; but was converted in 1935 by architect Alfred A. Tearle into a two-story restaurant.  It was home in the first years of the 21st century to publishing firm Fletcher & Parry “The Carriage House.” 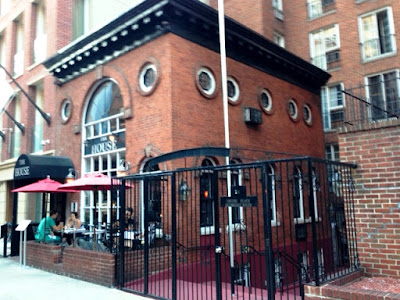 Renovated once again to a two-story restaurant, the charming brick building survives; a relic of the days when Union Square was girded with fashionable mansions and the horses and carriages of Manhattan’s wealthy were housed in style.

photographs by the author
Posted by Tom Miller at 11:36 PM