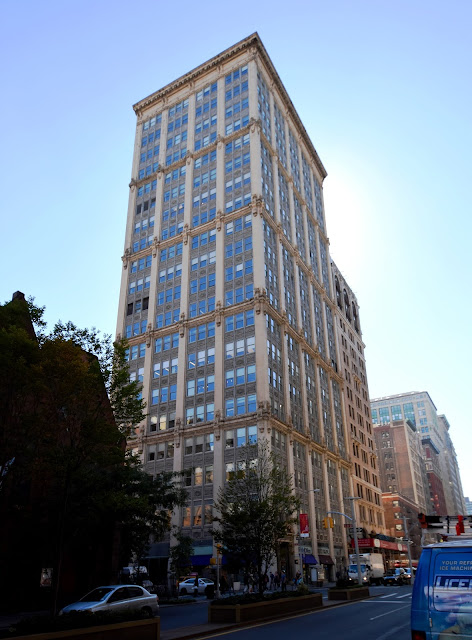 On December 29, 1912 The New York Times printed a charming sketch of Fourth Avenue (later renamed Park Avenue South) at around the time of the Civil War.  A coach headed north on the nearly-empty street and dormered houses lined the block.  Unseen in the drawing, of course, was Gramercy Park, the elegant mansion-lined enclave a block to the east developed in the late 1840s.

The purpose of the sketch was to illustrate the radical changes to the avenue.  Residences were being eradicated and replaced by soaring commercial buildings.  “In the business section of Fourth Avenue, from the Everett Building at Seventeenth Street to Thirty-fourth Street, there are only four entire block fronts which have not yet been invaded by modern improvements,” noted the newspaper.

Among those modern improvements was the Eagle Building at the southwest corner of Fourth Avenue and 21st Street.  Just two years earlier the New Amsterdam Hotel had stood on the site; but on May 13, 1911 the Real Estate Record and Builders’ Guide noted that the property had been purchased by “J. H. & C. K. Eagle, one of the largest of the city’s silk manufacturing firms.”  The journal pointed out that “Another skyscraper is soon to be added in the group of modern buildings on 4th av, south of 23d st, as the result of [the] deal.”

It added “The buyers are now located at 454 Broome st and their decision to move uptown is in line with the tendency shown recently by many large mercantile concerns.”

Although the purchase agreement delayed possession of the property until December 1, the brothers wasted no time in choosing their architect and laying plans.   In November 1911 Warren & Wetmore filed plans for what would be known as the Eagle Building.  In addition to their signature Grand Central Terminal still rising 20 blocks north on the avenue, the firm was simultaneously busy with two other depots, Union Station in Manitoba, Canada and Union Station in Houston; as well as the Condado Vanderbilt Hotel in Puerto Rico.

Their design for the Eagle Building incorporated the functionality of an office and loft building with architectural elegance.   The beige brick structure was ornamented with lush terra cotta decorations, including exquisite scallop shells, Renaissance-inspired pediments within some spandrels, and foliate panels.  Decorated cornices were placed at every fourth floor.  The Eagle brothers’ retail store at street level would be flanked by two especially-handsome entrances.  The Record and Guide said “The entrances, both to the lobby and the ground floor store, will have marble columns, limestone pediment and architrave.”

The Record and Guide was impressed with the expense and floor space set aside for the lobby.  The planned building, it wrote, “has been provided an unusually large entrance lobby, with marble staircase and vaulted ceiling…This lobby will be quite as fine as any in the office buildings in New York.”

And because the 20-story building sat directly behind the low mansion of Gramercy Park West, tenants were assured of sunlight on three sides.  This fact, along with amenities like the four “high speed” passenger elevators, three large freight elevators, the lobby, and the especially high ceilings (the Record and Guide noted that “all the ceilings are of unusual height for buildings of this character”), resulted in a highly-marketable structure.

A few months into construction the first lease was signed.  Franz Merz rented “for a long term of years” the entire second floor and part of the third.   His total lease amount was $150,000—more than $3.5 million in 2015.

The $600,000 building would lure other dry goods manufacturers.  On April 11, 1914 the Record and Guide reported that the United States Worsted Co. had taken the seventh and eighth floors.  The large fabric firm had been located at Fifth Avenue and 15th Street.   In announcing the lease, it mentioned “The same brokers have negotiations pending with several other large Fifth avenue worsted concerns to lease space in this building, which is the new centre of the woolen and worsted trades.”

The New York Times chimed in, saying that “Several prominent woolen and worsted selling agents now located on Fifth Avenue are preparing to move…Leases have been signed already by the United States Worsted Company and Herbert Lawton & Co. for space in the Eagle Building…and it is reported that at least a half-dozen other men’s wear selling agents are negotiating for space in the same building.”

The immense success of the J. H. & C. K. Eagle silk business was evidenced when in 1915, just after the Eagle Building was completed, they set to work constructing a $1.5 million silk mill plant in Kulpmont, Pennsylvania.  The American Silk Journal opined “This is undoubtedly the largest mill building project ever undertaken at one time by a single firm in the silk trade, and is a very substantial indication of the remarkable success had by the firm of J. H. & C. K. Eagle since the inception of their business.”

This success, coupled with the full tenant list in the Eagle Building, made John H. and Charles K. Eagle extremely wealthy men.  And they followed the pursuits expected of Edwardian millionaires.   In 1913 John H. Eagle embarked on a big-game safari to Africa.  A popular adventure at the time, it which would be brutally criticized today.

On January 2, 1914 The Times reported “Among the passengers on the New York was John H. Eagle, owner of the Eagle Building, 265 Fourth Avenue, who brought with him two cases of elephant tusks as trophies from his big game expedition into Central Africa.”

In June 1925 the Eagle brothers sold their building, deemed at the time by The New York Times as “one of the finest buildings in the section.”  They had no intention of leaving, however.  Simultaneously they negotiated a lease with the new owner, Frederick Brown, for retail and second floors, as well as the basement.

But J. H. & C. K. Eagle remained only four more years.   On December 23, 1929 The Times reported that Rex Cole, Inc. had taken the showroom and second floor for ten years.  The refrigerator distributor got more than simply two floors.  “The structure is to be renamed the Rex Cole Building after the lessee’s removal from 551 Fifth Avenue next month,” announced the newspaper.

While dry goods firms continued to lease space in the building—the Hamilton Woolen Mills Corporation took the 18th floor in 1929, for instance—other types of tenants moved in.   One was the “real estate” offices of Salvatore Maranzano.   On the door was a sign “Eagle Building Corporation.”

But Maranzano’s suite of offices had little to do with real estate transactions.  He was a gangland boss who, in September 1931, had the uneasy suspicion that some of his underlings were plotting a coup.  He decided to make the first move.

Maranzano hired hit-man Vincent “Mad Dog” Coll to take out the mutinous conspirators.   But before the plan played out, one of the men, Charles “Lucky” Luciano was tipped off.  On September 10, 1931 the mob power play would come to a violent end on the 9th floor of the Eagle Building.

At around 3:45, while seven men were sitting in the waiting room, four others entered with guns drawn.  The following day The Times reported “One of them ordered the seven men and Miss Frances Samuels, a secretary, to line up against the wall.  The others walked into the private office of Salvatore Maranzano.  There was a sound of voices raised in angry dispute; blows, struggling, and finally pistol shots, and the four men dashed out of the suite.”

The seven men chased after the attackers while Frances Samuels ran into Maranzano’s office.  “She found him slumped in a chair, his body riddled with bullets and punctured with knife wounds.”

In searching the stairways, detectives found on the sixth floor landing three cartridges from a .38 calibre pistol which the killers had fired at their pursuers.  On the second floor they found another pistol, fully loaded.  Next to Maranzano’s body was the stiletto that had been used to stab him.

By mid century the vast showroom space at ground level had been broken up into several stores.  From one of them Bernard Loeb operated his delicatessen.  The location was convenient, since he lived around the corner at No. 8 Gramercy Park.

Around 10:30 on the night of July 18, 1953, the 63-year old proprietor was alone in the deli when two gunmen entered and demanded money.  Loeb handed over what cash he had—less than $200—and the robbers fled.

Highly agitated, he telephone police.  Two radio cars responded and Loeb was able to give descriptions—“in their late twenties, wearing sports shirts and slacks.”   The police left to search the neighborhood.  When they returned after only a few minutes, they found Bernard Loeb dead.  The excitement had brought on a fatal heart attack.

Today Warren & Wetmore’s handsome Eagle Building is little changed above the ground floor’s modern store fronts.  While the lobby entrance has been modernized, the striking metal revolving door enclosure at the north end survives; carefully converted to a show window.