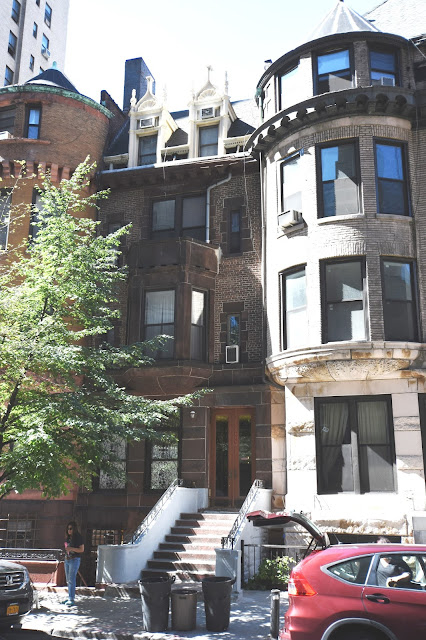 In 1887 architect Charles T. Mott began transforming the south side of 73rd Street between Broadway and West End Avenue.  The undeveloped plots would sprout 19 Mott-designed rowhouses by 1890, most of them for developer William J. Merritt & Co.

Among the string was No. 250, a three-story and attic house that sat above an English basement.  Two stories of brown brick sat above a brownstone base.  A stone oriel at the second floor provided a balcony for the third.  The handsome home with its tall spiky dormers sat between somewhat intimidating fortress-like residences; yet it managed to hold its own.

The newly completed structure was purchased by Walter Geer who leased it to William L. Trenholm.  A veteran of the Confederate Army, Trenholm had been the United States Comptroller of the Currency from 1886 to 1889, appointed by President Grover Cleveland.  He resigned to enter the private sector as president of a substantial insurance company.

The house was barely completed when Catharine Stapleton strolled by on November 6, 1890.  She tripped on the flagstone sidewalk and took a tumble.  Catharine sued for her injuries.  The case dragged on for a decade; but finally on August 8, 1900 she was awarded the munificent sum of $5,000 in Supreme Court (about $145,000 in 2015).

By now, however, William L. Trenholm was gone.  He moved to No. 260 West 72nd Street in 1893, most likely because that year Walter Geer sold the 73rd Street house to Emma M. Lockwood.

The next summer Emma’s daughter Berenice became engaged to George Leventritt.   The engagement was announced from Emma’s summer residence at Larchmont-on-the-Sound.  It sparked severe problems within the Leventritt family.

George was an attorney in his father David Leventritt’s law office.    The New York Times reported that “his father immediately expressed his opposition to the match.”  The newspaper explained that rumors held “that this was on account of the different religions of the engaged couple, Miss Lockwood being an Episcopalian and Mr. Leventritt a Hebrew, although not an orthodox one, and not an attendant at any synagogue.”

David Leventritt denied that his opposition was based on religious bias.  He told reporters he did not consider his son old enough to marry.  Whatever the reason, the rift seemed irreconcilable when George refused to renounce his love for Berenice.

As the couple’s January 2, 1895 wedding neared, The Times noted “Young Mr. Leventritt’s name has been taken from the door of the law office in the Stewart Building by his father’s orders.”  George opened his own practice at No. 257 Broadway and the newspaper reported “The father and son have separated their family and business relations.”

The unfortunate situation resulted in an understated ceremony, with no ushers and no bridesmaids.  Nevertheless the newlyweds went off on their honeymoon and returned to the house George had already purchased near Emma’s Larchmont-on-the-Sound retreat.

While her daughter and new son-in-law were honeymooning, Emma left West 73rd Street as well.  Just before the wedding she leased the house to Theodore R. Hostetter for five months.   He agreed to a rental of $4,800 “plus repairs.”

Hostetter was vice-president of his father’s pharmaceutical firm, The Hostetter Company, which was well-known for its stomach bitters.  Advertisements promised the tonic possessed “great value as a Preventative of Disease, rectifying so many bodily irregularities, and remedying that most fruitful source of ill health—Weakness.”

A polo player and yachtsman (he owned the steam yacht Deqeene), Hostetter’s passion for polo playing led him to construct a polo field on his Pennsylvania estate.  He was a member of the New York Yacht Club and the Columbia Boat Club.

He moved into the house with his wife, the former Allene Tew, and their two children Greta and Theodore, Jr.   Their decision to change residences may have been spurred by the death of their two-year old daughter Verna a few months earlier.

Not long after Hostetter’s lease expired Emma sold the 73rd Street house to Mrs. William R. Graves.  On October 10, 1896 The New York Times put the sale price at $40,000 (more than $1.1 million in 2015 dollars).   Flora Graves and her husband lived in Bennington, Vermont, and had purchased the house as an investment.

In 1898 H. Seado was listed as living here; and by 1900 No. 250 was home to the Henry Eugene Spadone family.  Spadone was associated with his two brothers in the Gutta Percha and Rubber Manufacturing Company at No. 126 Duane Street, founded by their father, Amedee Spadone.

While Henry Spadone conducted business, his wife, the former Mary Louise Dusenbery, filled her time as a member of the Ladies’ Auxiliary of The Society of the Lying-In Hospital of the City of New York.  The couple had two children.  Blanche was 23 in 1900.  Their 15-year old son, Amedee, would attend Princeton University within a few years.

The Spadones remained in the house until 1906 when Flora Graves sold it to Dr. Heinrich Stern. He was a prominent physician who would become President of the Manhattan Medical Society.

Also in the house was his son Adolph who made a more blue collar living as a painter.   His profession landed him in St Vincent’s Hospital on July 19, 1906.  The New-York Tribune reported that he “was badly burned yesterday by an explosion of gasoline in the basement of No. 21 Morton street.”

Born in Germany, Stern had come to the States in 1888 at the age of 20.  He moved to New York City in 1891 and would go on to write more than a dozen medical books.  Well respected as a specialist on diseases of internal organs, he was a member of the Academy of Medicine and the founder of the American College of Physicians and Surgeons.

As war broke out in Europe in 1914, Heinrich Stern became a First Lieutenant in the Army Reserves Medical unit.  He does not appear to have seen action, however, and by 1915 was publishing the quarterly journal The Archives of Diagnosis from the house.

Members of the theatrical profession sought out Stern as their physician.  When Theodore “Ted” Marks, described by The San Francisco Call as “one of the best known figures in the theatrical world,” suffered cirrhosis of the liver early in 1911, it was Stern who tended to him in his rooms at the Hotel Metropole.

The patient’s condition became severe in January 1912 and by February 9 there was little hope.  The Sun reported “Many of his friends, actors and theatrical managers tried to see him yesterday, but by the orders of Dr. Heinrich Stern…they were not permitted.”  Stern told reporters “Mr. Marks may live through the night, but I don’t think it possible.”

Stern was treating Oscar Hammerstein in 1915 when the impresario’s medical condition was such that his affairs were put in the hands of a “friendly receivership.”  Mrs. Hammerstein explained that Stern, “a specialist in diabetes” believed an operation probably would be necessary.  The New-York Tribune reported on March 31, 1915 “She said Mr. Hammerstein did not know he had diabetes until he underwent treatment for a growth on one of his feet.”

Somewhat ironically, the specialist on organ diseases developed cirrhosis of the liver.  He sold the 73rd Street house in September 1917 to Selma Stern and moved into the Hotel Bonta at No. 216 West 94th Street.  He died there at the age of 50 four months later on January 30.

The house was soon converted to furnished apartments.  It would become home to at least two families with European titles in the 1920s and ‘30s. While holding fast to their noble titles, both had fallen on harsh times.

In the 1920s Baron and Barsoness Solovieff moved into an apartment in the building with their two children.  The baron had been a Lieutenant in the Russian Army.  In 1924 Baroness Barbara Solovieff suffered public humiliation when she was taken to court for failure to pay for photographs she had ordered.

The New York Times noted “Like many other Russian exiles the Baron and Baroness have found employment since arriving in New York.”   The baroness apparently found adapting to the lifestyle of a working woman living on a shoestring budget difficult.

She took the young Prince and Princess to the upscale Aram studio to have their photographs taken.  While there she posed for and ordered 18 prints of her own portrait.  Her problem arose when she received the $80 bill.

Baroness Solovieff returned the photographs to the studio at No. 753 Fifth Avenue, “saying that she was unable to pay for them,” reported The New York Times on September 14, 1924.  The studio, of course, could do little with the photographs and filed suit against her.  She was ordered to pay for the prints. 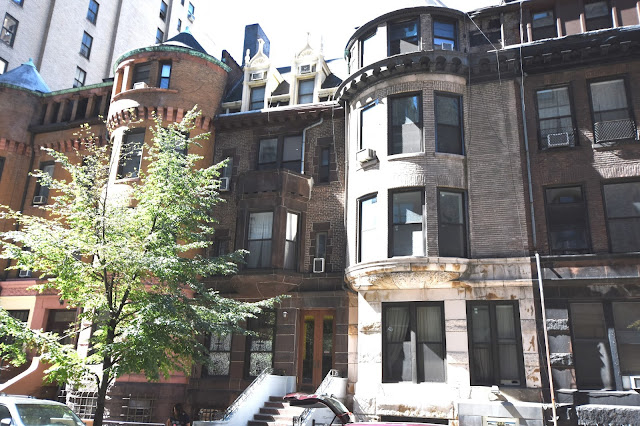 A decade later Countess Beatrice de Tavara and her son, Count Charles Michael de Tavara, had an apartment in the house.   Despite her noble title, or possibly because of it, Beatrice had questionable skills as a mother.

Early in 1934 the 11-year old boy was removed from her custody and placed in an institution, The Gould Foundation, after the Countess was accused of neglect.  He was later returned to her.   It was not a comfortable domestic situation, however, and on April 25, 1935 the boy disappeared.  Countess de Tavara waited a full month before reporting him missing—a delay that raised concern with officials.

On Thursday night, May 23 two boys were arrested in Asbury Park, New Jersey, charged with stealing bicycles.  One was Joseph Jeffers, described by authorities as a “13-year old Negro,” and the other identified himself as Charles McClellan, “an orphan.”  Police were able to confirm Jeffers’s identity; but they were suspect of the McClellan boy who closely resembled a photograph of the missing count.

The Times reported on May 26 “when he was shown a published photograph of him and his mother, Chief Catley said, he broke down and wept; admitted his identity but begged the police chief not to send him home.”   He explained to the Chief that he ran away after his mother had locked him in a closet.

He had hitch-hiked to Asbury Park and he “had been supporting himself ever since by peddling newspapers.”  The newspaper related “He said he had no difficulty in finding shelter, merely trying all the closed houses in Ocean Grove until he found one at 29 Atlantic Avenue that was not tightly shuttered.”

Joseph Jeffers was remanded to a reformatory; but the 12-year old Count was placed in the Briar Hill Home “pending the arrival of his mother and an investigation by probation officers.”

Countess de Tavara arrived at the children’s home the following day with the intention of taking Charles back home with her.  She was possibly shocked when she was prevented from doing so by Judge Elmer Wood who ordered an investigation into the case. 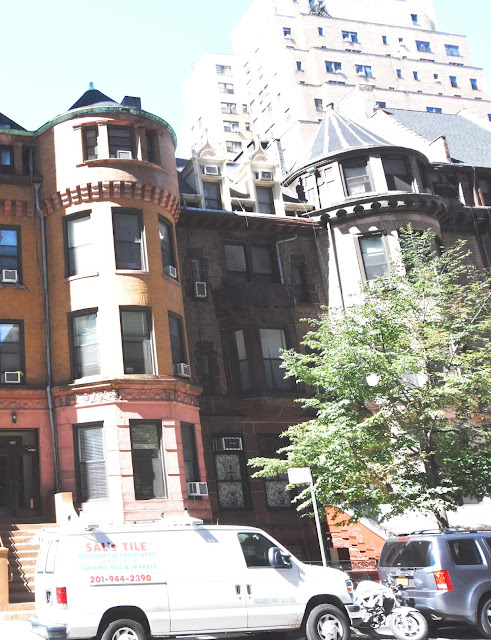 By 1960 when the house sold in July it was described as “containing sixteen furnished rooms.”  A renovation in 1984 resulted in a doctor’s office in the basement, a duplex on the first two floors and two apartments each on the third and fourth floors.  A subsequent renovation was completed five years later which maintained the doctor’s office and four mostly spacious apartments above.  A bit time-worn, the formerly proud residence still struggles for attention between its heftier neighbors just as it did in 1890.