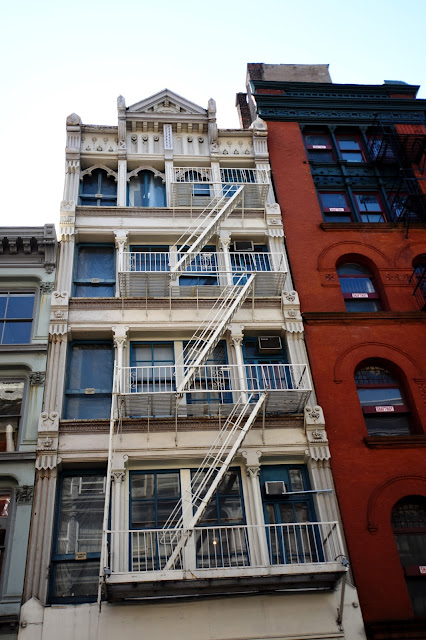 In the 1830s and ‘40s William O’Brien and his family lived in a comfortable brick house at No. 435 Broome Street.  Like their father, William Jr. and John were insurance brokers and the three worked together at No. 16 Wall Street.

By the end of the Civil War, however, the Broome Street neighborhood was no longer quietly residential.  The Federal-style homes were quickly being replaced with modern commercial structures.  Catherine Wilkins refused to be impeded by her sex and aggressively entered the real estate development game.  Her name repeatedly appeared in real estate columns as she bought and improved properties.

Among these was the former O’Brien house, being used as the C. M. Tremaine & Brother’s piano and organ store as early as 1869.  In 1873 she demolished the old building and commissioned architect William Appleton Potter to design a store and loft building.

Potter had just completed designs for the Princeton University’s Chancellor Green Library—his first major commission.  He had worked in the newly popular Victorian Gothic style for that structure, and now would bring it to his cast iron Broome Street project.

Cast iron facades tended to take typical forms in 1870s New York—pretending to be stone buildings with engaged Corinthian columns and broad openings.  Potter’s No. 453 Broome Street would step far out of that box.  He included fanciful elements, such as the unusual capitals of the pencil-thin columns upholding curlicue brackets.  And he pulled out the stops at the top-most level.

Here Potter ornamented the openings with Gothic tracery and topped it all with a decorative frieze and parapet similar to the cresting of bedroom and dining room furniture being designed at the time.  Here he added touches of another up-to-the-minute style.  Delightful spindly cast iron sunflowers—one of the major motifs of the Aesthetic Movement—lined up in full relief.  Within the triangular pediment, unseen from the street, was the date 1873.

Termed a “warehouse” by the Real Estate Record and Builders’ Guide, the building filled with firms involved in the millinery and apparel industry.  In 1876 H. Bacharach & Co., importer of artificial flowers; William Imissohn, feather dealer; and James P. Bills and J. N. Davenport, both cloth merchants, were in the building.
By 1885 the lace importer and manufacturer Duden & Co. had its salesroom here.  Its factory which employed about 100 workers was located in Williamsbridge area of the Bronx.  It was the scene of a vicious attack in March that year when factory worker Richard Roe was set upon by Louis Farrend and Louis Lagrange who then disappeared.

A search for the attackers frustrated police.  On March 25, 1885 the New-York Tribune reported “The Frenchman who inflicted the serious, if not fatal, injuries had not been captured at noon yesterday.  Mr. Roe was much worse yesterday, and his condition was considered critical.”

Duden & Co. was based in Brussels and, in addition to New York, had branches in San Francisco, London and St. Petersburg.  It had been doing business in New York since 1858.  The firm suffered a devastating blow when the Bronx factory caught on fire on March 8, 1888.   The was no fire department in Williamsbridge and a hand-operated engine from West Chester village did not arrive for an hour and a half after the blaze was discovered.

Hermann Duden told reporters that night, after the factory was destroyed, “It was shameful so much valuable property was lost.  I never would have built there had I known we were so ill provided with fire engines.”

Creditors quickly became nervous, especially because Duden’s permanent residence was in Brussels.  When the firm was late on paying Wilmerding, Hogeut & Co. that summer, a judge granted an attachment for $13,000 against the lace manufacturer.

Henry Rogers ran his novelty goods business in the Broome Street building in 1893 when he was slapped with an unexpected lawsuit by his sister-in-law.   Bernard Rogers had secured a degree of separation from Catherine Rogers several years before because of her “intemperate habits.”  Drinking, however, was not Catherine’s only problem.

The Evening World noted on December 8, 1893, “Rogers was a wealthy man when he was married, but is now a poor man.  He attributes his poverty to his wife’s habits.”   When the separation was finalized, Bernard stayed in the house at No. 395 12th Street in Brooklyn.  According to Catherine, he had purchased the $6,500 residence “in the name of his brother, Henry Rogers, so that she could not claim any part of it.”

The Evening World noted that “Mrs. Rogers has figured in court many times in the last few years.”  In December 1893 she would be there again.  And again.   She brought an action early that month to set aside the decree of separation, saying it had been obtained through fraud.  That case failed when evidence showed no fraud had been committed.  She then sued her former husband for “cruel and inhuman treatment.”  And then she sued Henry Rogers for $100,000 damages “for being responsible for her husband leaving her.”

Yet again, on December 7, she was in court concerning the assault case she filed against Bernard Rogers’ attorney, John Shea.  When he visited her about three weeks earlier, she had set an attack dog on him.  The Evening World reported that according to Catherine’s testimony, Shea “who represents her husband, from whom she is separated, knocked her about, threatened to shoot her and otherwise abused her.”

Shea’s story was far different.  “Shea, in his defense, said as soon as he got in the hallway Mrs. Rogers called to a boy to bring on the dog. In about a minute the boy appeared, holding the dog by a chain.

“Mrs. Rogers urged the dog to attack him, Shea says, and he had just time to dodge behind the vestibule door as the dog and boy shot by him.”

Once again Catherine Rogers’ case was dismissed, there being no evidence to substantiate her claims.

In 1908 Astor leased the entire building to leather bag manufacturer Freund Bros. & Co.  Its showroom was on the first floor, and its factory occupied the upper floors.   Freund Bros. would remain in the building until 1911 when it moved to East 17th Street.   In its place A. Lercher, leather trunk manufacturer, moved in.

In the early years of the 20th century trunks and wardrobes were essential for wealthy families traveling on railroads and steamers to summer resorts and European tours.  Manufacturers like A. Lercher had a broad customer base available.

In July 1912 Luggage and Leather Goods announced that Lercher, “whose factory at 101 Bowery, was recently damaged by fire, has removed to 435 Broome street in the building formerly occupied by Freund Bros. & Co…It is conveniently located near Broadway, with the advantage of the entire ground floor for office and salesroom.  He occupies the entire building, which has been equipped for manufacturing on a more economical and extensive scale.”

Lercher would remain in the building into the 1920s.  In 1925 the Astor family sold the property; and in the mid 1930s it was home to Henry Allen, distributor of hospital supplies.  In 1936 the company received a significant contract from the United States Government.

For the next few decades No. 435 Broome Street would continue to house industrial-type tenants.  In 1942 Murray Axlerod leased the entire building “for the sale of metal office furniture.”  And by 1966 the American Aviation Manufacturing Corporation, a supplier of aviation parts, had been here for several years.  It used the building for its “offices, stock room and shipping.”

But within the decade the Soho neighborhood would be transformed into one of artists, galleries and studios.  In 1976 the building was home to the Ambrose Arts Foundation’s performing arts venue and the gallery of the Women in the Arts Foundation, where artwork by female-only members was exhibited.

From 1995 through the first decade of the 21st century No. 435 housed the Puffin Room, a gallery and performing arts center.  It annually presented The Loft Show which highlighted the work of artists “considered Soho’s modern pioneers.”

In 2010 the owners put No. 435 on the market for just under $9 million, promising to deliver it vacant.  One real estate column noted “We see mansion potential here.”   Unsold, the building was relisted in 2013 with an increased price tag of $23 million. 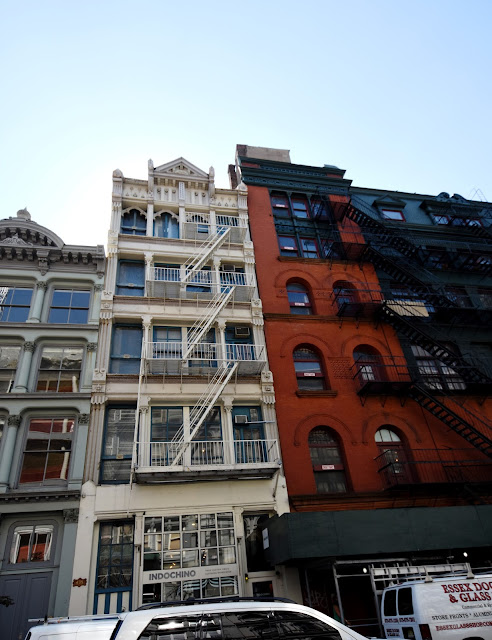 As it did in 1873, No. 435 Broome Street stands out among its neighbors.  The ground floor was been altered; although some elements survive.  The upper floor are deliciously intact; the greatest loss being the leaves and one blossom of the eccentric sunflowers along the frieze high above Broome Street.

non-credited photographs by the author
Posted by Tom Miller at 1:38 AM