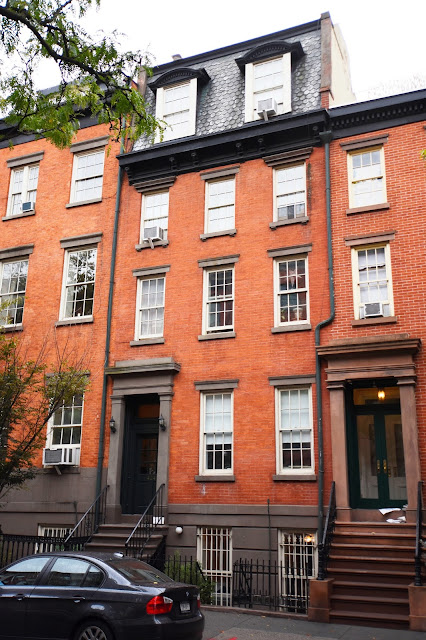 As the 1840s dawned the block of West 22nd Street between Ninth and Tenth Avenue saw a flush of residential construction.  In 1843 developer James Phelan completed a row of three speculative houses at Nos. 424, 426 and 428.  The up-to-date Greek Revival homes were faced in orange-red brick.  Three stories tall over rusticated brownstone basements, they featured the expected stone door enframements, dentiled cornices and understated brownstone lintels and sills.


Horace F. Clark owned No. 424, the easternmost of the three identical homes, following the Civil War.  In 1871 he decided to give the now-outdated house a facelift.  On Saturday, January 7 of that year the Real Estate Record and Builders’ Guide reported that he had filed plans for “one story to be added, with Mansard roof and extension on rear 14 by 20.”


Clark’s improvements were apparently done purely for investment purposes; for within a year of their completion he was living at No. 10 East 22nd Street.


The house became home to the family of Dr. James M. Austin.  The physician held the esteemed position of Grand Secretary of Masons in New York and his Masonic activities were a major part of his life.  In fact, in 1881 the Grand Commissioner of Appeals, Frank R. Lawrence, said that for the past quarter of a century “the history of his life had been to a great extent the history of the Grand Lodge.”


When Austin died in December 1881 his funeral, as expected, was one of great rituals directed by the Masons.  On December 7 “short religious ceremonies were held at Dr. Austin’s late residence,” reported the New York Times.  They were conducted by the pastor of the Church of the Holy Apostles, assisted by the pastor of St. Ann’s Protestant Episcopal Church.


The body was then taken to the Masonic Temple, at 6th Avenue and 23rd Street, where the Grand Master of the Grand Lodge of the State of New-York took over burial services.  In the eulogy, “the sterling worth and character of the deceased were referred to in appropriate terms,” said The Times.  “In the death of Dr. Austin, the speaker said, the order had lost a father…His influence had been felt throughout the United States, and wherever his name had been spoken it had been revered.”


Dr. Austin’s widow and daughter, Ida, continued on in the 22nd Street house.  They took on at least one boarder, Ella G. Condie.  Their tenant was an artist who did illustrations for St. Nicholas magazine.  While staying at No. 424 West 22nd Street, Ella Condie exhibited “Roses, A Sketch” at the Annual Exhibition of the American Water Color Society in 1886.  She put a price tag of $20 on the painting; equal to about $500 today.


In 1891 Ida Austin was working as the Cooking Teacher at Grammar School No. 10 at No. 180 Wooster Street.  The women were financially stable enough to advertise in The Sun on May 2, 1892 for a “Chambermaid: a neat young girl as chambermaid and waitress.”


By 1897 Ella Condie had married and moved a block away to No. 360 West 22nd Street.  Three years later the house would be home to the unmarried Wilson S. Dunn.  The wealthy businessman was the principal in W. S. Dunn & Co., manufacturers of “moldings.”  He held memberships in the Manhattan Club and the Ohio Society.


On Thursday May 14, 1903 Leopold Oswald and Henry Carroll crossed the river to Bayonne, New Jersey to bring back three cows for their employer, J. H. Hecht.  Hecht was, as reported in the New-York Tribune, “a dealer in milch cows.”  What started out as a routine assignment would become anything but.


Once the cows had been taken off the ferry on the New York side, the pair started to drive them north to Hecht’s operation at No. 424 East 48th Street.  When they got as far as 8th Avenue and 21st Street one of the cows refused to go any further.


The Tribune said “The animal seemed tired and hungry.  The two men beat her with sticks and kicked her, but the wornout animal refused to move.”


Oswald and Carroll did not anticipate that Agnes Shilling, who was now living at No. 424 West 22nd Street, would be around.  Incensed that the men were abusing the Jersey cow, Mrs. Shilling ordered them to stop.  “She says one of them told her to seek a place where ice is not known,” said the newspaper.


Agnes stormed off to telephone the Society for the Prevention of Cruelty to Animals.  During the ten minutes it took agents to arrive, she told a reporter that the poor cow was sorely abused.  When Agent Lambert appeared she urged “Come quick or they will kill that cow.”


As Lambert dealt with Oswald and Carroll, Agnes forced her way through the crowd that had formed and patted the cow on the head.  “Come Bossy, we won’t let those cruel men hurt you anymore,” the Tribune quoted her.


Police removed Oswald, Carroll, the three cows and Mrs. Shilling to the West 20th Street station house.  There Agnes filed a charge of cruelty and the men were given another violation for driving cows through the city streets before 10 p.m.


While things were sorted out, Agnes Shilling crossed the street to Hook and Ladder 12 and asked for hay for the cows.  “Two firemen carried it across to where the cows were standing, and they ravenously ate it.  Mrs. Shilling fed the red cow, patted its neck and spoke to it in endearing terms.”


After keeping watch over the cow for two hours, Agnes Shilling went back home to 424 West 22nd Street.  As she walked away Captain Cottrell of the 20th Street station said “I wish there were more women of her character in the city, and men as well…if more men and women would take the stand that Mrs. Shilling did animals would suffer less.”


During World War II the house was home to Bert E. Bibby and his wife, the former Lora Ann Clark.  On October 21, 1944 their daughter, Erma Bell Bibby joined 27 other young girls who had enlisted in the U.S. Navy as WAVES and were headed to the Naval Training School.


The block of once proud homes saw marked deterioration as the 20th century progressed.  No. 424 had been divided into a number of small apartments by the 1964 when 26-year old Haitian immigrant Claude Morreiset arrived in New York and began work as a shoemaker.


Also living in New York was Mary Dutchalellier, an older woman who worked as hotel maid.  Morreiset had known the woman since he was 12 years old in Haiti.  Two years later he was living at No. 424 West 22nd Street when he became convinced that Mary Dutchalellier had put a voodoo curse on him.


The 55-year old woman explained that she could not cure him, to which Morreiset replied “You’re going to die; I’m not going to die alone.”  He thrust a seven-inch kitchen knife into her stomach twice, killing her.


His explanation was simply that the woman had put a voodoo curse on him.  He was taken to Bellevue Hospital for observation.


In 1971 the house was converted to two apartments per floor.  It was possibly at this time that the wonderful and delicate iron cresting on the roof was lost.  On the whole, however, the exterior of No. 424 looks much as it did in 1871 when Horace F. Clark gave the house a Victorian make-over.

photographs by the author
Posted by Tom Miller at 4:24 AM