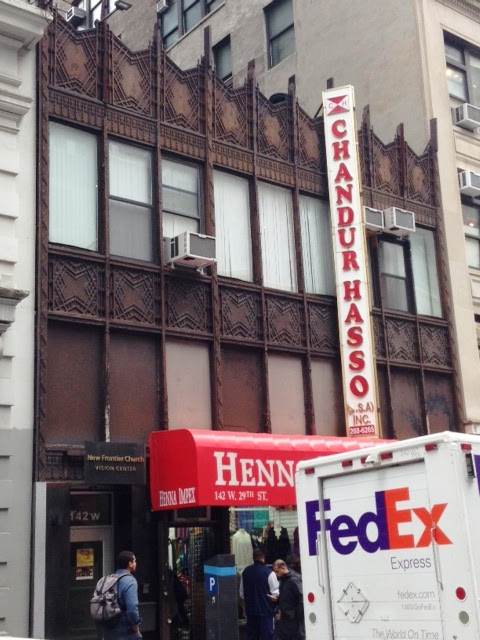 In 1881 the building at No. 142 West 29th Street was described as a “three-story brick store and tenement.”  In the lot behind it was another, smaller structure that may have been used for storage, a stable, or a rented house.  Sitting squarely within the Tenderloin District, it was surrounded by crime, vice and police corruption.

In 1895 Arnold Grob leased the building from the estate of John G. Cary.  He converted the ground floor "store" into one more of the dozens of saloons in the district.   He would run his saloon and billiard hall here for 15 years.

Most likely as added protection in the gritty neighborhood, Grob kept a large mastiff chained in the rear yard.  On the night of September 3, 1900 Henry Lyman walked into the saloon.   After having a few drinks, he stepped out into the back yard to pester the muscular dog which he knew was safely chained.

The following day The New York Times reported “Lyman teased the dog, and finally poked him with a billiard cue.  The animal resented these familiarities, and with a ferocious growl jumped at Lyman.  The force of his jump broke the chain, and in a second the dog was burying his teeth in Lyman’s face.”

The drunk and the dog rolled over and over as Lyman tried unsuccessfully to escape from the infuriated beast.  The man’s screams were finally heard inside as “the dog was getting the better of Lyman.”  Arnold Grob came to the rescue, pulling the dog off the wounded man.

Lyman’s face was “terribly lacerated” and he was severely bitten over his body.  He was in the New York Hospital the following day “in a dangerous condition.”

A major reform of the Police Department, due in no small part to the efforts of Commissioner Theodore Roosevelt, put an end to the notorious Tenderloin District around this same time.  In 1905 the brick building at No. 142 West 29th Street was demolished and in its place a three-story commercial building was constructed.

The district was not the only thing changing in 1905.  A revolution among artists and architects against overblown Victorian ornamentation was seen in the related Arts and Crafts and Craftsman styles; and further west in the emerging Prairie School and Chicago styles.

Henry I. Oser designed No. 142 West 29th Street for the Furrier's Building Company.  He used energetic cast iron spandrel panels to define the little loft building—their geometric cobweb-like motif at the cutting edge of architectural style.  Above the third floor they formed a serrated parapet with spiky finials.  The completed structure was small.  It sat on an out-of-the-way block.  But its style, modified for a small urban structure, shouted that it was both unusual and important.

The former neighborhood of gambling dens, dives and brothels was already being consumed by the Furrier District as well as a few other apparel firms.   In 1917 the Hirschfeld Cloak Co. took a floor.  And in 1920 the building was home to the Gabbe Mole Works offices (their “dressing plant” was in Norwalk, Connecticut); Chernak Bros. & Ratner; and Katzman & Henig, all fur dealers.

Throughout the 20th century No. 129 would house dealers in “furs and skins.”  In 1922 I. Berg & Sons was in the building, as was William Levy, who would remain at least through 1933.   As the century drew to a close, furriers still leased upper spaces; while in 1981 the retail store had become home to the Biarritz Thrift Shop.  By now the little building was hemmed in by soaring factory structures and the original store front was heavily altered.  But above, the wonderful 1905 façade remained intact.

The rare, if bedraggled, gem was put on the market and then sold in 2015.  In its sales pitch, the exclusive agent ignored the architectural rarity of the structure, focusing only on the lot’s potential for development. 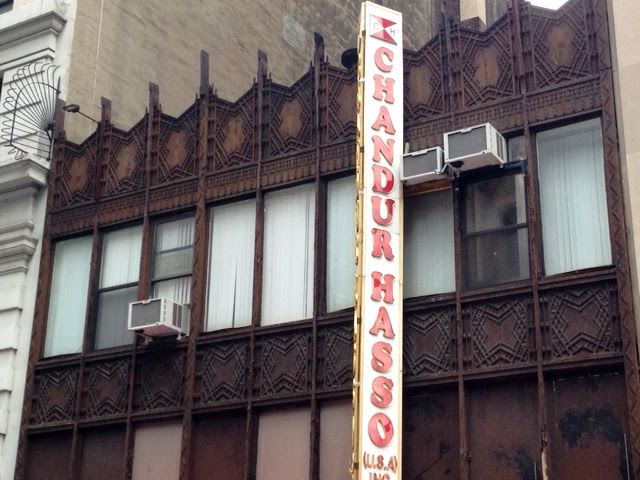 And indeed, in May 2015, the new owner, New Jersey-based Hasso Gulrajaney, filed for permits to build a 15-story, 30,000 square-foot luxury residential building on the site.  The development would require approval from the Board of Standards and Appeals.  But for the time being, it appears another overlooked treasure is about to be lost.