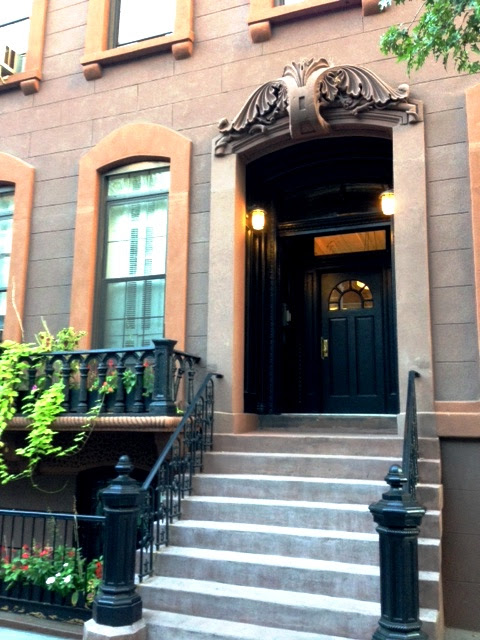 The development of a new upscale neighborhood around Union Square in the 1840s would spill onto the side streets during the next decade.  Dr. John W. Francis owned significant property on the east side of the Square and in 1852 began selling off building plots.

In August he sold four lots—Nos. 108 through 114—to John W. Smyth who, seven months later, turned them over to carpenter and builder Robert C. Voorhies for double the price he had paid.  Voorhies constructed four identical brownstone-fronted homes which left no doubt as to the financial status of his targeted purchasers.  Begun in 1853, they were completed within the near year.

Among the new homes was No. 110 which, like its neighbors, rose four stories above an English basement.  The 24-foot wide Italianate rowhouse featured the expected extras in a fashionable home—floor-to-ceiling windows that opened onto a balcony that stretched the width of the parlor floor,  hefty Italianate ironwork, and a handsome bracketed cornice.  But the architect set the homes apart with especially lush foliate carvings, like leafy waves breaking, over the openings.  The motif burst forth above the entrance as an elaborate carved crown worthy of the most lavish Fifth Avenue mansion.

No. 110 was sold to Thomas S. Young.  As was customary, the title was put in the name of his wife, Mary E. Young.   The couple would soon have a daughter, Emma Priscilla.

Referred to by The New York Times on April 28, 1875 as a “well-known gentleman,” Young engaged in several professional endeavors, including being an inspector of Indian supplies.  In the 1870s the Department of the Interior furnished supplies to Native American reservations.  Bids based on government specifications were taken from contractors.

By now Emma Priscilla was a grown woman and on Thursday, April 27, 1876 the house was the scene of her wedding to Augustus Talbot.  Two years later her parents would move to Park Avenue; although they retained ownership of the 17th Street mansion.

The house was leased to Harry Bowley Hollins and his wife Evelina Knapp Hollins.  Hollins was born in New York in 1854, the same year the house was completed.   The ambitious and aggressive 24-year old had formed the stock brokerage firm of H. B. Hollins in 1877, and a year later founded the banking and brokerage firm H. B. Hollins & Co.  Prominent and Progressive Americans pointed out “This firm from the time of its organization transacted the bulk of the Vanderbilts’ operations on Wall Street.”

The Hollins family had barely moved in before the house was the scene of a funeral.  Evelina’s sister, Kate Louise Knapp, died on Wednesday, December 17.  Her funeral was held here on the morning December 20.

The Harry and Evelina were still renting the house when Mary Young took out a $13,000 mortgage on the property in 1881.  But they moved on in 1887, the same year that Mary Young died at the age of 72.  In their place brothers William D. and George H. Andrews moved in.    The men were partners in William D. Andrews & Bro., a contracting firm involved in the “driven well” business.

William was 63-years old when they moved into the house.  The leading force in the firm, he had invented a centrifugal pump in 1847 for removing sand from wrecked ships.  He was the first to raise a sunken ship by pumping it out.  By now he held at least 37 patents for construction equipment like hoisting machines, and a patent for a method of constructing artesian wells.

While the brothers were undeniably well-off; their repeated appearances in court suggests their business operation may have been just a bit shady.  The year after they moved into the 17th Street house they were sued by landlord John Brooks for unpaid rent on their offices on Water Street and Cherry Street.  Later the City of Albany would sue them for $205,960.70 for failure to construct a water plant.

The Andrews brother’s cook was looking for another job in January 1890.  She described herself in an advertisement in The Sun on January 16 as “a respectable Protestant woman” and a “good cook.”  The separation was apparently amenable, since she said she could be interviewed at the house.

The house was briefly home to the family of E. D. Smith.  The records of the New York Society for the Prevention of Cruelty to Children noted that in 1896 Mrs. Smith donated “two bibs and two blankets.”

By the time she donated the bibs and blankets, the Union Square neighborhood had greatly changed.  Once lined with fashionable mansions, the park was now ringed with commercial buildings and retail shops.  The homes along the side streets were operated as boarding houses or razed as their wealthy owners moved away.   The two houses next door to No. 110—Nos. 112 and 114—had been demolished in 1890 to make way for an apartment building, The Fanwood.  When the Smiths left No. 110, by 1898, Florence Wurtz opened her boarding house here.

After half a century of ownership, in July 1904 the estate of Mary S. Young sold the house to Ella L. Henniger.  Ella quickly resold it to Katherine Shippen Farr.  Among Katherine’s upscale tenants would be Mrs. Alfred Thurston Baker of Philadelphia.  She came to New York to avoid the press as she began divorce proceedings against her prominent husband.

She was tracked down, however, and on June 6, 1905 The Sun reported “Mrs. Baker is living in a boarding house at 110 East Seventeenth street.  She is a good looking young woman.”

Mrs. Baker explained “My husband deserted me two years ago and I have not lived with him since.  I have been ill with nervous prostration and have been in the care of a trained nurse.”  She explained that while she retained her townhouse in Philadelphia, “I have been living here quietly, so as to avoid notoriety.”

In 1909 real estate operator Herman Wronkow purchased The Fanwood apartment building and then set his sights on the property next door.  On September 25, 1909 the Record and Guide reported that Katherine S. Farr had sold No. 110 to Wronkow.  The Sun pointed out that he “now controls a plot 74x92 between Union Square and Irving place.”

The mention was not simply a passing comment.  Real estate operators who gobbled up adjoining properties most often had a plan in mind for further development.  If that was the case, however, it did not come to pass.  No. 110 was converted to apartments in 1933; however the exterior remained mostly unchanged for the rest of the century.  Until around 1990, that is, when the exquisite—if time-worn--trim was shaved flat, leaving only the magnificent carving over the entrance intact. 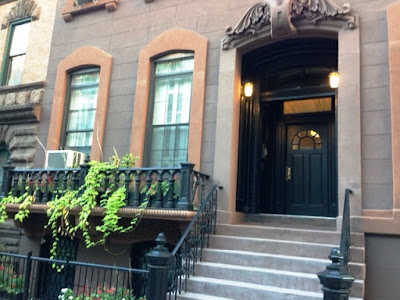 The residence received its touch of fame in 1989 as the home of Nicolas Cage’s character in the creepy film Vampire’s Kiss.  Today there are eight apartments in the house, some of which retain original architectural details such as mantels.  And despite the tragic loss of the window surrounds, it reminds the passerby of the elegance of the block in the decade before the Civil War.

photographs by the author
Posted by Tom Miller at 11:23 PM