The Colorful History of No. 431 Broome Street


As the city inched northward in the decades following the Revolution, new streets quickly filled with the homes of merchant class families.  Among them was Broome Street, named in honor of John Broome who brought $2 million of tea from China in the first years after the war, initiating the China trade that would make fortunes for many New York merchants.


Around 1825 a handsome red brick home was erected at No. 431 Broome Street.  Just a block east of Broadway where Federal mansions were being built, the house reflected the comfortable financial circumstances of its builder.  Three stories tall with a dormered attic, the home was entered above a short stoop.  A handsome arched entrance included foliate-carved blocks. 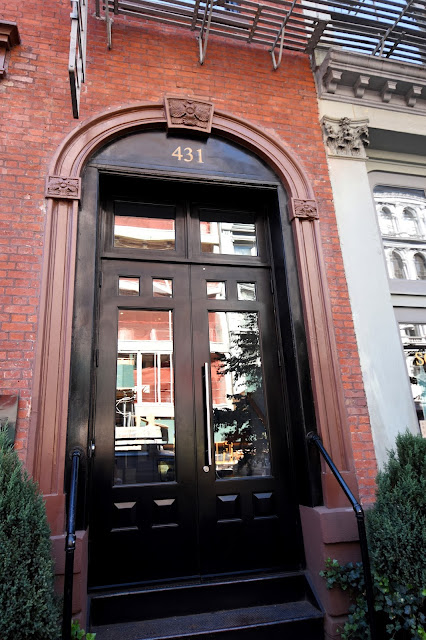 It was possibly well-to-do merchant George Dutch who constructed No. 431.  His family lived here certainly from the mid-1830s through 1843.  But that year the Dutch family was apparently converting their home to a boarding house.  The widow of Morris Martin, Margaret, was listed here that year, along with her son Richard who made his living as a clerk.   Also in the house was accountant William A. Budd who worked at No. 82 William Street.


Budd would remain in the house for at least six years and was apparently doing well in business.  His profession had changed from “clerk” to “importer” in city directories in 1849.  Another importer, Edward Boker, was living in the Broome Street house that year; suggesting that it was still a high-end establishment.  That was further supported by the presence of  the widowed Mrs. Robert Ainslie.  Her husband had been president of the North American Fire Insurance Co.  When her 36-year old son, John, died in June 1852, his funeral was held here.


But commerce was quickly encroaching onto Broome Street.  While boarders like clerk William Kruse continued to live on the upper floors in 1860, the parlor level had been converted to business.  August H. Arensfeld ran his “liquors” business here, most likely on the first floor and the basement had been converted to Henry Bode’s saloon.


Despite the presence of the saloon, Broome Street remained respectable.  The piano and organ district had moved onto the block within the past few years.  Directly across the street at No. 421 was Lighte & Bradbury’s piano-forte business by 1860 and before 1866 C. M. Tremaine & Brothers piano and organ operation moved into No. 435.


In 1862 Edward A. Lauter joined the musical trend on the block when he opened his musical instrument store in No. 431—most likely taking over the space formerly home to Arensfeld’s liquor store.  Lauter was listed as a “violin and guitar manufacturer.”  In 1866 his relative, Franz (or “Frank”) joined Edward and their listing was changed to Lauter & Company.


The former house was perhaps too small for the Lauters' vast instrument business; for they were gone the following year.  In 1867 Henry F. Dipple, manufacturer of “Piano-Forte key and action” was doing business here.


By now it appears that the last of the residential tenants had left.  That same year directories listed M. R. Brewer and Abraham Goldsmith as doing business at No. 431.   Another of the businesses here suffered a devastating theft in February 1873.  An advertisement was placed in The Sun on February 20 by the attorneys of the anonymous firm:


$300 Reward—Stolen from 431 Broome st., a tin box containing the following: $10,000 North Carolina bonds, mortgages, deeds and other valuables.  The payment of the above bonds has been stopped.  The above reward will be paid and no questions asked upon delivery of the said box and contents at our office.”


The owners’ eagerness to retrieve the box was evident in the amount of the reward—equal to approximately $6,000 today.


While the fur and apparel district pushed the music industry off the block, the saloon continued in the basement.  In 1876 it was run by Simon Schwartz; while upstairs C. E. Bresler & Co., Nicholas Marinkovitz, and Rudolph Barbancile operated their fur businesses.  Also in the building that year was apparel firm Stryker & Co.


Felix Marx owned No. 431 in 1884 and while the venerable brick homes around his were demolished or renovated as modern cast iron structures; he chose to leave the building essentially as-is, with the necessary alterations for business.   It would seem that his attention was more focused that year on the struggling saloon in the basement.


After a quarter of a century the saloon business here appears to have been suffering.  In 1884 Marx signed a three-year lease on the basement with Charles H. Balz.  Balz agreed to a rent of $100 per month.


But a year into the lease Balz sublet the space to Ernst Schnopp.  Within days Schnopp signed over the “saloon and lease” to Bernheimer & Schmid.  And within four months, in September 1885, a no-doubt frustrated Felix Marx leased the saloon again to Schnopp, at a reduced rent of $1,000 per year.


The business does not seem to have been doing much better in 1893.  On June 16 M. Katzenberg placed an advertisement in The Evening World offering “A Bargain—downtown restaurant for sale cheap.”


By the turn of the century the once-refined home had received a shop window and the attic had been raised to a full floor.  A decorative brick parapet was added later.


In the meantime, the apparel firms here hired low-paid immigrant sewing girls.  Disaster was narrowly averted when fire broke out on December 1, 1903 in the skirt factory of Gordon & Mascovitch.


The blaze started in the afternoon, when Herrmann’s Restaurant in the basement was crowded with lunchtime patrons.  Upstairs dozens of workers were busy at their sewing machines.  Detective Sergeants Vallely and Collins were riding a Broadway streetcar when they heard screams a full block away.  They jumped from the car and ran towards No. 431.


The New York Times reported “Five Italian women and girls fled to the front fire-escapes and stood screaming when a blaze was discovered on the second floor of the five-story factory, 431 Broome Street.”


The fire escape led from the top floor to the second, where the girls were.  When the policemen arrived, another worker was struggling to lower the fire escape ladder to the sidewalk.    One of the girls had no intention of waiting to be rescued.  According to The Times she “climbed the cornice to No. 433, where she was taken through a second-floor window by William Kusnock, employed there.”


The Sun’s version of the episode differed slightly from that of The Times.  It reported “The detectives got a small ladder from a building near by and propping it against the front of the building carried the four girls to the street, and then helped the man down.”


The Times gave a more gripping account.  “They fought their way up through the smoke to the first floor, where they helped a man who was trying to lower the fire-escape ladder…They then carried the rest of the women down.”


While the drama was taking place on the second floor, the patrons of Herrmann’s Restaurant “rushed to the street.”  The fire was extinguished before it spread beyond the second floor.  The Times called the detectives’ heroism “smart work.”


By the time of the fire No. 431 was surrounded by cast iron loft buildings and the once-quiet residential street bustled with trucks, factory workers, and businessmen.  Throughout the 20th century the former house would see a succession of businesses—the commercial printer Winnick Press around the time of World War I; R. Seller Co., dealer in store and office fixtures during the Depression years; and a plumbing shop in the early 1970s.


In 1971 the floors above the plumbing business were converted to “joint residential and professional purposes for artists.”  It was the dawn of the rediscovery of Soho by artists and throughout the cast iron district neglected loft buildings were being converted to artist’s studios and galleries at street level.


The renaissance of Soho was evidenced when the ground floor became a trendy restaurant, Gourmet Garage, in 1997.  But epic change came to No. 431 when it was converted to The Broome; a 14-room boutique hotel.  A $6 million renovation by architects James Anzalone and Thomas Tsue included the construction of an adjoining building on the rear lot, creating an open air courtyard. 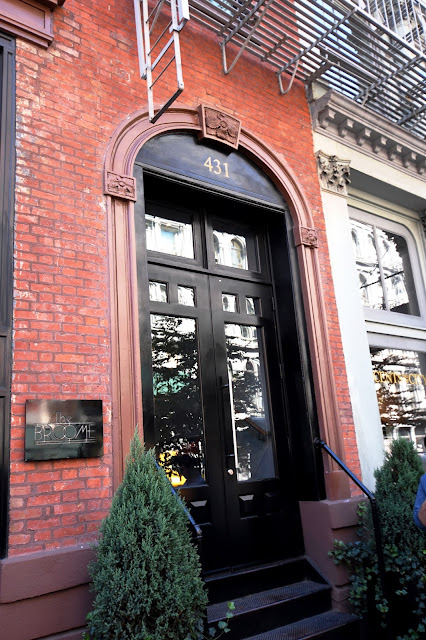 photographs by the author
Posted by Tom Miller at 1:41 AM