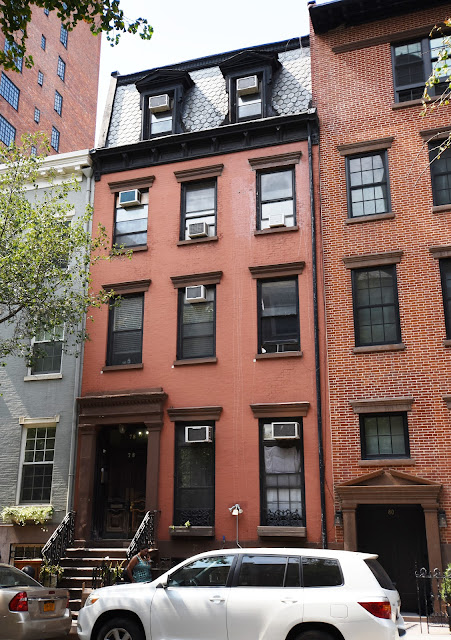 As Washington Square and the streets branching off it were developing in the 1830s, speculator William W. Berwick got in on the action.   Starting out as a mason, by now he was a builder.  In 1839 he completed two identical brick-faced Greek Revival homes at Nos. 15 and 17 Washington Place, just steps from the Square.

The style was just gaining a foothold, pushing out the Federal style used for the Washington Square mansions begun just a few years earlier.  Berwick’s new homes were accented with brownstone; found in the high stoops, the doorway surrounds including heavy entablatures and cornices, and the lintels and sills.  William Berwick and his family took No. 17 for themselves; while he retained possession of No. 15 and leased it as additional income.

The two handsome homes were, by no means, the builder’s last projects in the neighborhood.   The extent of his activities are evident in an advertisement in the New-York Daily Tribune on February 1, 1851.  He offered for sale “two three-story and attic brick houses fronting on Washington-square, corner of West Washington place and Macdougal-st.  Also, the two Houses adjoining 3 and 5 West Washington-place will be sold low.”  The ad promised “They are built in the best manner, under the superintendence of William W. Berwick, Esq. and have every possible modern convenience.”  Berwick was offering the most desirable houses—those facing Washington Square--at $13,000—about $415,000 today.

William Berwick, for some reason, eventually moved next door to No. 15.  It was here, on Tuesday, November 18, 1856, that the 70-year old died and where his funeral was held three days later.

In 1859 A. H. Emery, whose business card listed civil engineer, “inventor and patentee,” was living and doing business from a suite of rooms in the fashionable Astor House Hotel.   In August that year he advertised that “a rare opportunity to invest in two new and important inventions, patented June 21, 1859, will be found by calling…at his rooms.”

The two inventions Emery had come up with that year were the “New Anti-Friction Cotton Press” (both for packing and compressing), and the useful “Hay, Cider, Cheese and Tobacco Press.”  He especially was interested in Southern investors for these latest devices.

The inventor had moved to No. 17 Washington Place by 1863, and with the outbreak of Civil War he turned his focus on implements of battle.  While living in the house he filed for a patent for “a new and improved Projectile for Rifled Muskets and Other Kindred Arms.”

A. H. Emery’s stay here would be relatively short-lived.  By 1864 the Serrell family was in the house.  William Indigo Serrell was studying at the Free Academy of the City of New York at the time.  And by 1869 it had been purchased by James T. Derrickson.

Derrickson was the principal of the James T. Derrickson & Co., paper business.  The firm manufactured “fine note and envelop paper” and operated as a commissioner paper warehouse as well.  His wife sat on the Board of Managers of the Magdalen Benevolent Society.  Founded in 1830, its object was “the promotion of moral purity, by affording an asylum to erring females, who manifest a desire to return to the paths of virtue, and by procuring employment for their future support.”

On July 8, 1871 the Real Estate Record and Builders’ Guide reported that Derrickson was updating the Washington Place house.  Calling the 24-foot wide residence a “first-class dwelling,” it announced “one story with Mansard roof to be added.”  The completed alteration gave the nearly 30-year old house a touch of cutting-edge residential design.

Exactly one decade later Washington Place was renumbered and No. 17 became No. 78.   It was not the only change to come to the block, however.  While Washington Square remained an exclusive address; the side streets were less fortunate.   The brick and brownstone houses that had been “first-class dwellings” were quickly being operated as boarding houses.

Such was the case with No. 78 Washington Square.  Now owned by John McCabe, an assistant chief of the Fire Department, his family lived here while taking in boarders.  On November 22, 1891 an advertisement appeared in The Sun offering “Nicely furnished small and large rooms, with or without board; terms reasonable.”

A defamatory circular had been distributed in 1885 that purported to list McCabe’s indiscretions.  “In 1869 he was indicted for shooting a man; that in March, 1870, he shot four other men, for which he was indicted, but the case was not prosecuted; that he was also indicted for assault and battery and was discharged in court, and that he was also arrested on a charge of highway robbery.”

The New York Times reported “The circular also states that in September, 1884, a quantity of goods stolen from O’Neill’s dry goods street, at Sixth-avenue and Twentieth-street, by Agnes Francis, an employe of O’Neill’s, was found in McCabe’s house.”

It was “defective vision and a chronic throat trouble” that ended Chief McCabe’s career in January 1893.  Among his tenants around this time was an out-of-work nurse who sought employment through an ad in the New-York Tribune on April 15, 1894.  Apparently eager to find a job, she was willing to relocate.  “Medical and surgical nurse; first-class; city or country.”

Since his forced retirement, John McCabe had spent much time at the nearby Milholland Club at No. 111 Clinton Place.   He became troubled in the spring of 1895 after being notified that was being called as a witness in the investigation by the Special Committee of the State Senate into corruption within the Fire Department.  His testimony would require him to implicate good friends in illegal activities.

On the morning of April 25, 1895, the day before he was scheduled to testify, the 60-year old McCabe left the Washington Place house and went to the Milholland Club.   He got there about 10:30 “and chatted with those of the members who were in the rooms,” reported The New York Times the following day.  The other men recalled that he “was not in his usually cheerful mood, but was rather moody and appeared depressed.”

His impending appearance before the Senate Committee was weighing heavily on John McCabe.  By noon there was only one other person in the club and McCabe had been sitting by the window without talking for almost an hour. Suddenly he looked at his watch and said to George Williamson, “Why, it’s after 12 o’clock.”

They were the last words John McCabe would ever utter.  He walked into a small room off the back of the main parlor and within moments Williamson heard a pistol shot. McCabe had put a bullet into his right temple.

The now-widowed Jessie McCabe and 16-year old John McCabe, Jr. stayed on in the Washington Place house.    Jessie continued to take in boarders, like Waldo H. Richardson who was Chairman of the Public Schools in 1898.  She was determined that her son would succeed and by 1901 he was studying at Columbia University.  After John McCabe received his medical degree, he opened his practice at No. 78 Washington Place.

In 1911 a boarder died and the McCabes generously permitted the funeral of Barnard Brown to be held in the parlor on October 2.   Only six months later it would be the scene of another funeral—that of Jessie McCabe.  She died in her bedroom on March 20, 1912.

John McCabe retained possession of the house, and continued his practice here.  In 1915, though, he updated and renovated the building as apartments.  On November 22 that year Domestic Engineering reported that John A. Scollay, of Brooklyn, “will install the heating in a new apartment block at 78 Washington Place, New York.”

The building attracted a wide variety of tenants.  In 1917 Texas-born Will Boaz lived here.  A contracting engineer, the 30-year old had an office in the Woolworth Building.   And in 1919 author Hart Crane moved in for a short time.  Crane’s biographer Paul Martani, in his The Broken Tower: A Life of Hart Crane, noted “It was a larger apartment than he’d rented before and boasted all the twentieth-century luxuries: double bed, stove, closet, even running water.”

By now Greenwich Village had become the mecca for artists, poets, writers and musicians. On April 2, 1921 the Liberator Costume Ball was held, prompting the New-York Tribune’s headline “Bohemianism Runs Unbridled at Dress Ball of Liberator.”  In reporting on the event, the newspaper noted “Chase Herendeen, a dancer of 78 Washington Place, was accredited with being the most beautiful girl in the grand march.  She represented a slim pirate in a red silk cap set on top of her bobbed hair, a white waist open at the throat and a pair of black silk breeches.”

Mrs. J. B. Irwin lived in the building at the same time.  In August 1922 she made a bid for one of The Evening World’s $25 prizes for the best real-life story submitted by a reader each day.  She wrote about seeing a man and his little son enter Washington Square Park on August 4.  The boy carried a toy automobile.  When his father sat on a bench to read the newspaper, “a horde of bootblacks descended upon him and to git rid of them seemingly he chose one to shine his shoes—a little fellow.”

In the 1920s Manhattan streets were still filled with impoverished young boys trying to earn money as bootblacks and newsboys.  They were often homeless, living in charity-run lodging houses.  And they definitely had nothing like toy automobiles.

Mrs. Irwin related “The bootblack worked slowly, spending most of his time watching the child play with the toy.”  Exasperated, or possibly simply kind, the man took the brush from the bootblack and motioned him to play with his son and the toy car.  “The bootblack went to play while the man finished shining his shoes himself.”

By 1938 the apartments that Hart Crane found to have all the 20th century luxuries, were now described by the Department of Buildings as “furnished rooms.” 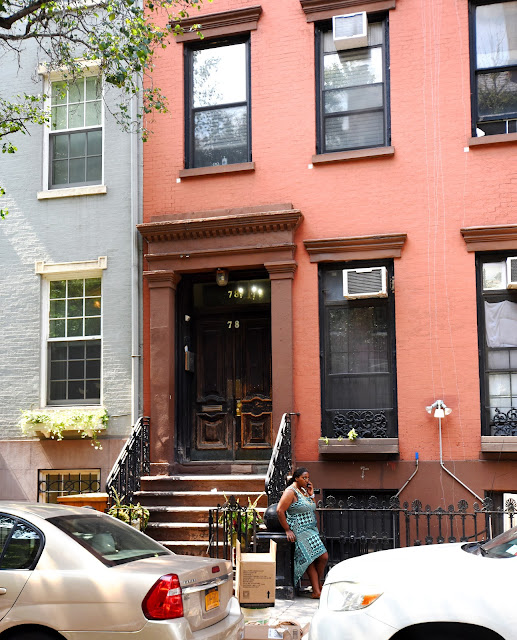 While its twin sister next door received an artist’s studio upper floor in the early 20th century; No. 78 is little changed since James Derrickson updated it in 1871.   It survives as a wonderful piece of the tapestry that comprises the block and catalogs nearly two centuries of residential architecture.