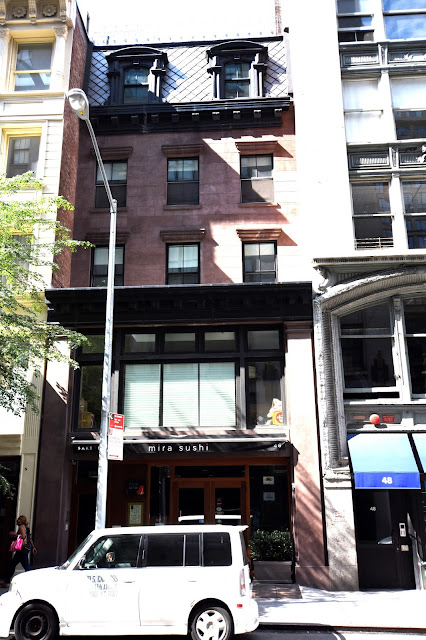 In 1850, two decades after Henry Brevoort, Jr. erected the first mansion on Fifth Avenue, grand homes had spread northward as far as 23rd Street.   The development of the retail shopping district along Sixth Avenue, known as the Ladies’ Mile, would not be in full swing for years.  And so the blocks between Fifth and Sixth Avenues took on an elegant residential nature.

That year developer John Latson completed a brownstone-fronted mansion at No. 46 West 22nd Street—one of several carbon copy residences in a row.  Three stories tall above an English basement, its Italianate elements included a handsome stone entrance with carved pilasters and a dentiled cornice, heavy iron stoop railings and fencing, and an unassuming bracketed cornice.

Latson seems to have sold No. 46 and its neighboring houses immediately upon completion.  His aggressive speculative construction got ahead of his income and on July 9, 1850 all his properties were seized by the Sheriff.  Among the properties sold at auction on Tuesday, November 12 were new houses on Hammond Street, and 21 houses on the south side of 34th Street between Ninth and Tenth Avenues (called Hudson Place).  The 22nd Street houses escaped the list.

Adams, whose mother’s family arrived on the Mayflower, was among the founders of the Union Theological Seminary in the City of New York in 1852.  The pastor of the Central Presbyterian Church on Broome Street, in 1853 he and his congregation founded the fashionable Madison Square Presbyterian Church.

Adams and Martha had five children, Thatcher Magoun, William Jr., Mary Elizabeth, Susan Magoun, and Henry Stuart Adams.  Little Henry died on October 10, 1852 at just 3 years of age.   When the Adams family moved into the 22nd Street house Thatcher was studying at New York University and was a member of the fraternity Psi Upsilon.   Almost a century later, in 1941, the Annals of Psi Upsilon would remember “During the fifties meetings were often held at the residences of members frequently at the home of Thatcher M. Adams ’58, 46 West 22nd Street.”

One may imagine that the fraternity meetings in the Reverend Adams’ home were restrained.  In 1856 Charles Scribner published the pastor’s latest book, The Three Gardens: Eden, Gethsemane, and Paradise.  It went by the alternative title Man’s Ruin Redemption, and Restoration.  There was no space in the volume, presumably, for fraternity tomfoolery.

Rev. Dr. Williams Adams was one of the most well-known and influential religious leaders in the city.  A graduate of Yale’s 1827 class, he was invited to give the Alumni oration there in May 1867.  The children, too, would do well.  Thatcher became partner in the prominent law firm of Anderson, Adams & Young; and William became a banker and member of Adams & McHarg.   Mary married banker James Crosby Brown and her sister married the wealthy Eugene Delano.

The affluent Adams family maintained a summer estate in the Watchung Mountains in New Jersey.  It was here that Rev. William Adams died of liver disease on August 31, 1880.   But nearly a decade before his death Adams had sold the house on West 22nd Street to real estate operator Harriet Hendricks.

Harriet was dealing with a changing neighborhood.  The retail establishments of Sixth Avenue were inching nearer and many of the millionaires of Fifth Avenue were already migrating above 34th Street.  She updated and enlarged the residence by adding a stylish mansard roof in 1872.

Harriet Hendricks apparently leased the home, as she did with many other properties, until her death in 1886.   The estate moved quickly to liquidate the property and on April 10 that year the Real Estate Record and Builders’ Guide reported that it had been sold to Charles Lytle Lamberton for $27,000—in the neighborhood of $700,000 today.

The wealthy attorney’s office was a No. 16 Exchange Place.  Born in Carlisle, Pennsylvania in 1829, he had served on the Governor’s staff for two years and was a Pennsylvania State Senator from 1862 through 1864.  Married to the former Anna De Witt, he was a member of exclusive organizations such as the Sons of the Revolution and the Manhattan Club.

Anna’s widowed sister, Mary De Witt Evans, came to live with them.  She died in the house on December 28, 1893 at the age of 69.  Her funeral was held on the afternoon of New Year’s Eve in the parlor here.

Unlike the Adams family and many other wealthy New Yorkers, the Lambertons chose not to maintain a country house; but preferred to summer at fashionable resort hotels, such as the New Rand Hotel on Summit Mountain in the Catskills. 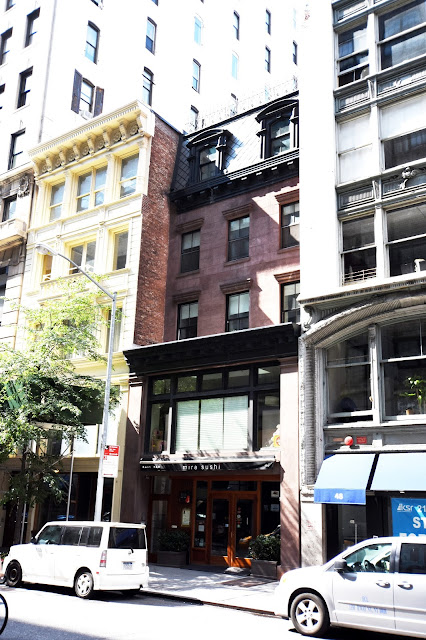 Anna De Witt Lamberton was 67 years old when she died in the house on February 17, 1901.  Her funeral was held here two days later and, like her sister, she was buried in Kingston, New York where she was born.

Charles, now 73 years old, remained in the house with his small staff of servants despite the drastic changes in the neighborhood.   Before long his health began to fail (The New York Times would say he suffered “a complication of diseases").   In the fall of 1906 he became ill and never recovered.  The elderly lawyer died in his bedroom at No. 46 West 22nd Street on November 25.   His, the third and last funeral held in the parlor since he bought the house, was held the following Tuesday. His burial, too, was in Kingston.

The West 22nd Street block was, by now, nearly completely commercial and, no doubt, developers had been eyeing the old mansion for years.  The house was sold to William Ross who almost immediately contracted architect John B. Franklin to convert it for commercial purposes.   Completed in 1907, the renovations included the removal of the stoop and the extension of the basement and parlor floors to the property line.   Apparently the shop windows bowed out into the sidewalk; for in 1917 Ross commissioned Maurice Courland to redesign the front windows “flush with building line.”

The renovations resulted in a commercial front that attempted to coexist with the old residential façade.  Matching brownstone was used for the flanking pilasters and the second floor cornice nearly duplicated the original.

Among Ross’s early tenants was Vogel’s Vienna Café in 1913 which was no doubt a refreshing resting spot for weary shoppers of the Ladies’ Mile emporiums.

The upper floors became rented rooms.  Among the tenants here in 1920 was Edwin Stanton George.  His forceful views about immigrants would be comfortably at home in the political debates of today.  He wrote the New-York Tribune on January 27 that year suggesting that the Republicans add to its plank “America for Americans.  No male or female inhabitants of the United States of America shall be granted the franchise to vote unless born on American soil.”

George proposed the elimination of the five-year waiting period for immigrants to vote altogether.  “I can hardly feel that we would be unjust in preventing aliens from obtaining the same rights in five years, for I do not consider that the human mind can sufficiently change in that short length of time to be worthy of taking part in the activities of a country like the United States.” 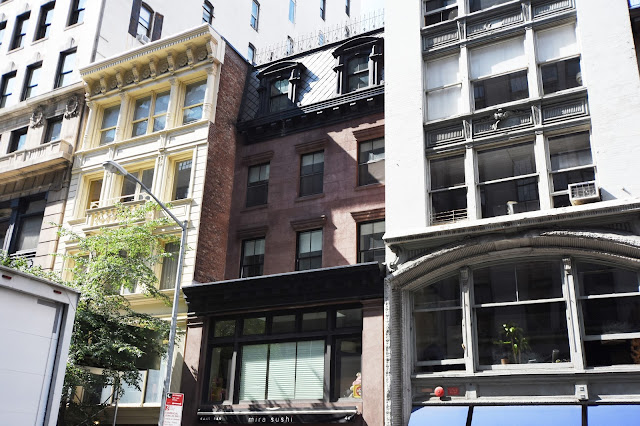 After two more renovations of the storefront during the 20th century, the upper floors of old Adams house hover eerily over a sushi restaurant and office space--still looking much as they did following Harriet Hendricks’s 1872 updating.