In 1835 construction began on St. James Church at No. 32 James Street.  It would be among the earliest Roman Catholic churches erected in Manhattan—the first being St. Mary’s on Grand Street in 1833.   Catholics endured severe religious discrimination at the time.  As the recently completed St. Joseph’s Church uptown in Greenwich Village was rising parishioners had to stand guard against attacks.

The children of the parish necessarily attended the James Street School until 1854 when Rev. Patrick McKenna established The St. James’ School in temporary quarters.    Already the neighborhood around St. James Church, known as the Fourth Ward, was composed mostly of impoverished Irish immigrants.

Funds for the construction of the school building—to be located on the irregular triangular plot of land at James Street and New Bowery (renamed St. James Place in 1947)—were collected mostly through fairs and similar events put on by the parish women.   Other events, such as the “anniversary preceding the annual vacation of St. James School” which took place at the Athenaeum on July 22, 1857, provided funds.

The New-York Daily Tribune reported that “The entertainments consisted of vocal and instrumental music, dialogues, and recitations by the pupils,” and that the admission fee “which is to be applied  the purchase of a library and reading-room for the use of the children educated by the Brothers of the Christian Schools under whose charge this institution is conducted.”

It would take 14 years for sufficient funds to be raised and the new school building completed.   Catholic Churches of New York in 1878 remembered “In 1868, Rev. Mr. Farrelly erected, on the corner of New Bowery and James Street, a noble building of the most modern style, which throws in the shade some of the Public School buildings that cost the city millions.  It is perfect in all its arrangements.” 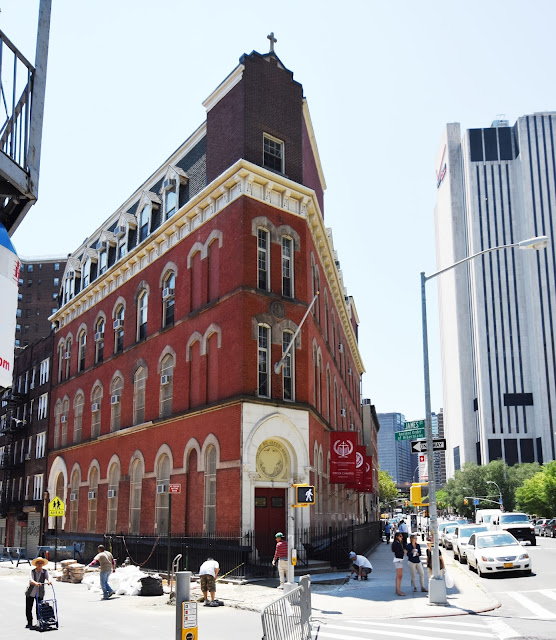 The four-story red brick structure, including the stylish mansard roof, was trimmed in contrasting stone.  The “most modern style” was a marriage of Gothic Revival and French Second Empire.   At the farthest ends of the structure—one at the end of the New Bowery façade and the other on St. James Street—were the girls’ and the boys’ entrances.  At the chamfered corner of the oddly-shaped building was the entrance to the Hall, situated in the basement.

There was no tuition at St. James School; The Evening World later explaining that it “prospered under the efforts of the St. James’s Free School Society, which was established under the patronage of Archbishop Hughes.”

The necessity for such a large facility is easily explained by the rolls in 1878.  The boys’ school, in charge “of those excellent instructors, the Christian Brothers,” as described by Catholic Churches of New York, had an enrollment of 640 pupils.  The girls’ school, under the Sisters of Charity, had more than 800 students.   The disproportionate numbers can most likely be attributed to young boys leaving school to obtain jobs to help their families financially.

Catholic Churches of New York boasted “The course of study is so thorough, and with such regard not only to mental but also to physical training, that the results have been most satisfactory.  Within the last few years no less than fifty graduates of St. James’ school have passed the rigorous examination of the Board of Education and received certification as teachers in the Public Schools.”

The spacious hall in the basement of the school building was frequently the scene of neighborhood meetings.   Such was the case in 1881 as Irish-born residents came together to help the Irish National Land League, the political organization formed to abolish landlordism in Ireland and enable poor tenant farmers to own their own land.

At a Land League meeting here on the afternoon of February 6 that year one speaker warned “Ireland is in the crisis of her history and if she is not rescued from the clutches of the present landlord system, she will never be established as an independent people again.”

Two months later, on April 24, the hall was crowded with women who assembled to form a Ladies’ Branch League.  Former Assemblyman Thomas F. Grady addressed the women, saying “the ladies of the parish had built the house in which the meeting was held and had been efficient workers in the cause of temperance, and he was sure their help would add great strength to the Land League movement in the ward,” reported The Sun.
On the evening of June 26, 1883, the boys’ department of St. James’ School held its closing exercises.  The program that night listed the youthful entertainers, including the line “Recitation—Master Alfred Smith.”   Smith’s family lived in a tenement building on South Street near the corner of Roosevelt Street under the Brooklyn Bridge.

The Evening World later recalled “His youth was spent on the streets.  The water front was lined with saloons, and policemen in that part of town we picked for their ability to hold their own with inebriated seamen.  His earliest memories are dotted with pictures of fighting men and screaming women, being dragged through the streets to the police stations.”  It was no doubt greatly through the strict discipline of the Christian Brothers of St. James’ School that Alfred E. Smith escaped his sketchy environment to become a beloved Governor of New York State.

But Smith would not be the only successful politician to receive his education here.  In 1904, when the school celebrated is Golden Jubilee, it counted among its alumni Senators Victor J. Dowling, Joseph P. Bourke and Thomas F. Grady; District Attorney Eugene Philbin and corporate counsel John J. Delany.

The Jubilee celebration was a ten-day event, kicked off with a Pontifical Mass in St. James’ Church, which was filled with Christian Brother instructors, pupils and their families, and alumni.  During his sermon Rev. John J. Kean expressed the Church’s support of parochial schools.  “We want our children to have schools from which God and religion are not banished, and not the schools in which the faith of even Protestantism is dying out.”

His thoughts took a tone which, by 21st century views, went a bit over the line.  “Look at France and be warned by the conditions that prevail there to-day.  There the government and the Church is overpowered by Jews, pagans and non-believers who now spurn and trample on the rights of those who are numerically as great as themselves, who seek to destroy the Church by abolishing the schools and exiling the religious orders.”

Archbishop John Murphy Farley spoke about the religious intolerance the Roman Catholic Church had suffered when it established the school.  “Never was there such an unequal struggle as that which was entered upon fifty or sixty years ago in the establishing of the parochial schools.  It was a struggle against the wealthiest city in the world.  We had with us only the poor, while opposed were the wealthiest among our citizenship.”

Over the decades that the St. James’ School had stood on the pointy plot few considered why the corner had been made flat—assuming, most likely, that it was nothing more than the architect’s wisdom in creating an entrance and windows on what would otherwise be an acute, useless angle.   But in 1914 the church discovered another reason.  It did not own the tiny triangle of land directly in front of the entrance to the hall.

The New-York Tribune explained on August 22, 1920 “It is a triangle of not more than three or four square feet in area” and added “These little parcels, remnants of large properties, had been lost in the cutting through of New Bowery and were discovered by chance in searching the titles of the adjoining properties.”

The rector of St. James, Father Curry, was alarmed and set off on a search in locating the owners.   He finally located them “in a far-off corner of Ireland,” said the Tribune.   On July 21, 1914 The New York Times happily announced that Eugene O’Connor had transferred title of “a tiny parcel at the southerly intersection of New Bowery and James Street” to St. James Roman Catholic Church.   The Times was more specific than the Tribune, reporting “The plot measures 3.6 by 2.5 by 2.6 feet.”

A little over half a century after the building was opened it was in trouble.  In 1921 the Department of Buildings deemed it unsafe.   The church responded by putting the building on the market.  On January 26 The Evening World reported “Old St. James School…is for sale.  Its time-worn weathervane still perches on the rusty gray tower which rises from the four-story red brick building, where former Gov. Smith received his early education, but a sign four feet square, bearing the portent, Thomas J. O’Reilly, real estate, quoths ominously ‘nevermore.’’

The article recalled that “Practically every boy in the famous Cherry Hill district went to school there, and many of these have since become famous.  For twenty-five or twenty-six years, it is said, the school carried off the honors in competitive examinations for West Point, and its contributions to Annapolis were no less marked.”

Apparently the church soon found that marketing a old, unsafe school building was no easy task.  Instead, the church’s rector, the Rev. Patrick Daly, raised $15,000.  The Catholic Charities added another $60,000 and by 1924 the building had been renovated.

The New York Times, on March 3 that year, reported “Fireproof material has replaced the wooden stairs and woodwork.  A gymnasium has been equipped in the basement and a restaurant is provided for the children of poor parents.”

The renovated building was dedicated by Archbishop Patrick Joseph Hayes.  Following his address 12-year old Catherine David gave a speech thanking the Archbishop for “our magnificent school building.”  She added that it would be nice, in honor of the occasion, if he would grant a school holiday.

Archbishop Hayes jokingly responded, “Why didn’t you wait to ask for a holiday on some day when a difficult examination may be expected?”  But the little girl’s request was granted and the children got a day off from classes.

In 1951 a plaque and memorial bronze doors were installed in commemoration of Alfred E. Smith’s attendance here.   The school would continue to serve the community for another half century.  Then, in February 2010, The Villager ran the headline “Outcry as Archdiocese to Close 2 Historic Schools.”  The newspaper reported “Citing low enrollment, the archdiocese plans to close St. Patrick’s Old Cathedral School on Mott St. and St. James School on St. James Place at the end of this school year.” 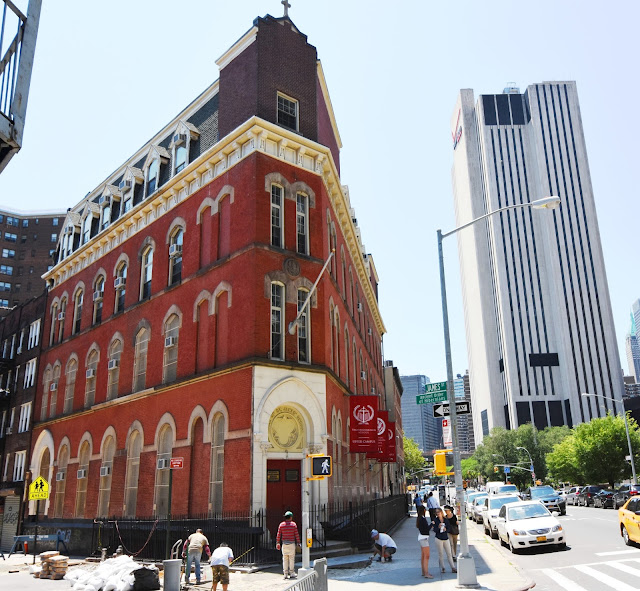 The students of St. James’ School were merged with St. Joseph School.  The Church of the Transfiguration School took over the old brick building on St. James Place for its upper grades.  The brick and stone relic of the days when Roman Catholics fought religious oppression in New York City survives remarkably intact, all considered, in a much-changed neighborhood.

Photographs by the author
Posted by Tom Miller at 2:19 AM