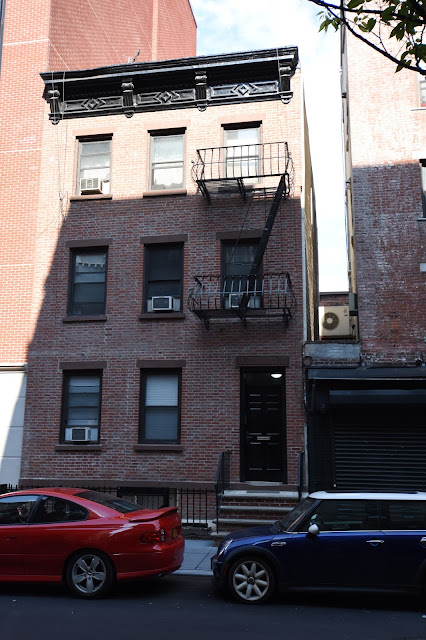 In 1837 John Harrison, a “carter,” was leasing the two-and-a-half story house at No. 201 Mott Street.  The frame building was faced in Flemish bond red brick and simply trimmed in brownstone.  An unassuming doorway, three steps above the sidewalk, testified to the working-class status of its occupants.

In February that year Harrison had joined a long list of neighbors who signed a petition to the mayor protesting the proposed extension of Centre Street from Broome to Houston Streets.  The petition claimed, in part, that the extension would traverse “at an almost acute angle, five of the most extensive blocks in that part of the city’ destroying, mutilating, and injuring every street, lot, and building in its course.”

The little Mott Street house must have been a bit crowded.  Along with Harrison’s wife and three sons, Thomas, James and George, he rented a room to Michael Dunn, a grocer.  The turnover of boarders was sometimes rapid.  In 1841 another carter, Peter Hanley, lived here and a year later grocer John A. Colohan had moved in.  A family of three, the Slevins, apparently crammed into another room around this time.

Two of the Harrison boys would not follow their father’s cartman occupation.  They learned metal working and in 1843 both received awards from the American Institute.  Thomas won for “the best copper tea kettle” and George for “a miniature tea kettle.”  James chose a more blue-collar existence.  In 1846 he was listed in directories as “laborer.”

The Harrison family was no longer listed at No. 201 Mott Street after 1847.  But the home continued to be filled with hardworking tradesmen.  In 1849 carpenter David Leal, whose shop was at No. 77 Reade Street, was here; and in 1852 it was home to John D. Palmer, a shoemaker; printer James Tubbs; and police officer Daniel Ebbets.

After living here for around five years, on the morning of New Year’s Eve, 1857 John Palmer died in the house at the age of 59.  His obituary noted he had suffered “a long and painful illness.”  His funeral was held here on Sunday morning, January 4 at 1:00.

The Slevin family had lived in the house since at least since 1842, when the Harrisons were still here.  Daughter Annie taught in the Girls’ Department at School No. 21 on Marion Street, between Spring and Prince Streets.  The Slevins would remain at No. 201 for more than three decades.

Michael Slevin, it appears, enjoyed his drink.  He was heading home “at an early hour” on May 31, 1871 when he was attacked by John Harrigan who “struck him on the head with a stone, inflicting a severe but not dangerous wound.”  After striking Slevin with the rock, Harrigan ran away.

Michael presented an embarrassment to his politician brother James J. Slevin.  When Michael was arrested on Sunday, August 11, 1878, charged with intoxication and disorderly conduct, newspapers noted that he was “brother of Alderman Slevin.”

The Times went further, noting that Officer Ryan found Slevin on Mott Street “on Saturday night, in a state of intoxication, and acting very disorderly.  When he ordered him away, Slevin became very abusive and used insulting language.”   When Ryan and another officer attempted to arrest him, Slevin called Ryan “a sucker” and resisted arrest.

In 1877 the house was owned by Henry Fitzpatrick and his wife Margaret.   The crowded conditions were somewhat relieved when, in August 1886, the Fitzpatricks spent $1,200 to raise the attic to a full floor and add an “iron cornice.”  Although the contractors, Wunnenberg & Johnson, made no attempt to match the expensive Flemish bond brickwork; their addition was only slightly noticeable.    The fashionable Italianate cornice updated the old building.

Margaret Fitzpatrick was a native of County Cavan, Ireland.  By the time of her death in the house on Thursday, June 28, 1888 Henry had already died.  The funeral for the 71-year old widow was held in the house on Sunday, July 1.

The Fitzpatricks' daughter retained possession of No. 201 Mott Street through the turn of the century.  When she advertised it on June 1, 1902, the property was described as a “small house and lot.”  It remained on the market until Spring 1903 when Catherine A. McGill purchased what the sales report called “an old building.”

While the Fizpatrick tenants had been mostly Irish immigrants, the area was now primarily Italian.  Among Catherine McGill’s residents was the Motta family.

Nicola Motta was riding in a “horse and buggy” on Ocean Parkway, Brooklyn, on the night of April 10, 1904 with Nicola Marconi.   Suddenly the carriage “was struck at full speed” by an automobile.  The New-York Tribune reported that the car, containing William A. Stark and William J. Lanley, both of Brooklyn, was coming from Coney Island.

The newspaper said the carriage “was demolished, and the forelegs of the horse were broken.  Marconi was thrown to the ground and badly bruised, but was not seriously injured.  Matta [sic], in the fall, struck his head on a tree.”

“The injured man was taken to the Kings County Hospital, where it was said he would probably die.”  Later The New York Times confirmed Motta’s skull was fractured and reported that “The police learned that the buggy was on the wrong side of the road.  No arrests were made.”

The Motta sons remained on in the Mott Street house.  Salvatore Motta used the address as late as 1910 for the Motta General Contracting Co.; and Nicholas Motta conducted his real estate business here through 1918.

Not only the house at No. 201 Mott Street but the entire neighborhood around it suffered neglect throughout the next decades.  In 1941 the Department of Buildings deemed the building unsafe. 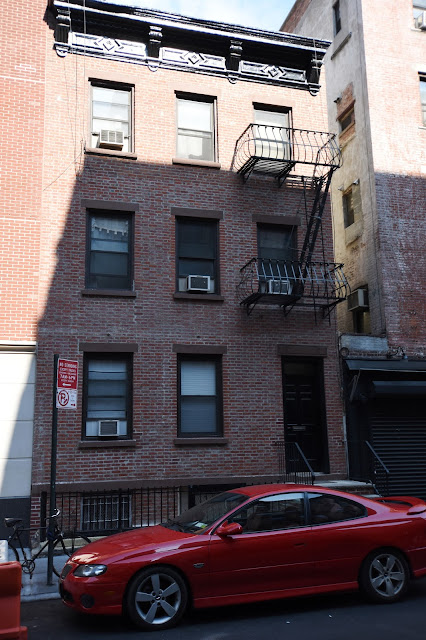 But as the Nolita neighborhood was discovered as the 20th century became the 21st, Mott Street saw the arrival of cafes and trendy shops.  When a new luxury apartment building was constructed next door at No 199 the little house at No. 201 received a façade restoration.   The last house on the block, it is a relic of the earliest days of Mott Street when hard-working laborers shared close quarters.