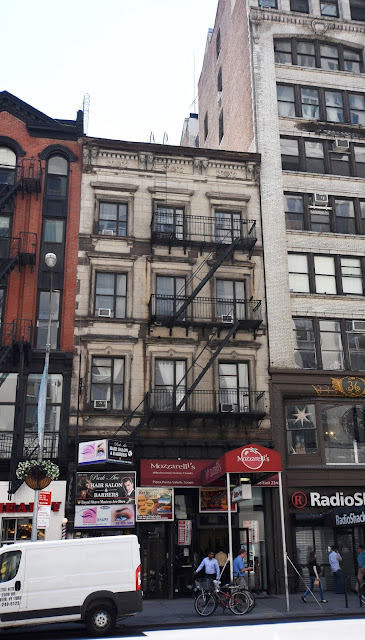 Madison Square and Union Square, six blocks apart, were both exclusive residential enclaves by the outbreak of the Civil War.  Upscale rowhouses facing Madison Square shared the park view with even more elaborate mansion like that of Leonard Jerome.

But the relentless northward tide of commerce would bring to an end the residential character of both parks.  The first to fall, naturally, was Union Square at the south which saw the first encroachment of business in the 1860s.  A developer, two decades later, would remember that the wealthy residents of the square considered it “a sort of sacrilege.”


By the last quarter of the century Madison Square, too, would be radically changing.  But before that time, William Cowper Prime and his wife lived comfortably in their 27-foot wide residence at No. 38 East 23rd Street.   Four stories tall above an English basement, the house was veneered in white marble.  It was a touch that spoke of Prime’s wealth and social status.  The windows sat within handsomely carved enframements and, inside, the house was filled with expensive and exotic artwork and rare porcelains. 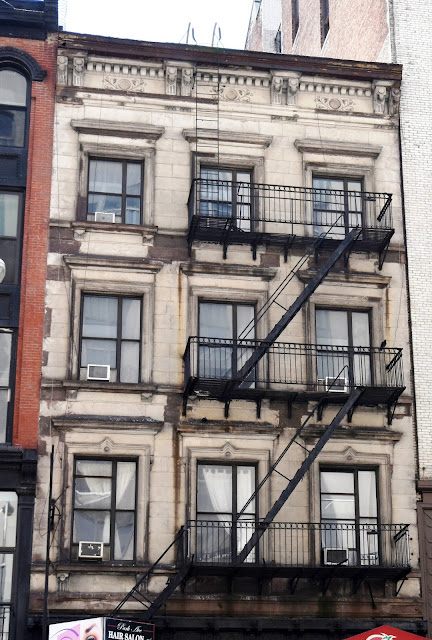 Born in 1825, Prime came from a family which, according to the 1896 A Library of the World’s Best Literature, “have always been prominent in scholarship and patriotism, distinguished in several professions for  great intellectual virility and high character.”

William C. Prime graduated from Princeton in 1845 and practiced law in New York City until he became a co-owner and the editor of the Journal of Commerce in 1861.  He remained editor until 1869 and owned the newspaper until 1893.

But it was his writings and travels that earned him celebrity of sorts.  In 1855 through 1856 he toured Europe, Egypt, and the Holy Lands; returning in 1869 to 1870.  The trips resulted in books, including Boat Life in Egypt and Nubia and Tent Life n the Holy Land, both published in 1857.  Other books would follow.

The travel also sparked an interest in ancient and medieval art and archaeology.  He amassed a collection of wood engravings that was considered the most complete and valuable in the country.  His influence resulted in the creation of the department of Art History at Princeton.  In the meantime his wife, the former Mary Trumbull, collected as well.   Her interest was in porcelains and ceramics.   A journalist noted that, along with ancient examples, “some pieces are said to have been at one time used in the furnishing of the Palace of the Tuileries.”  The Prime house on Madison Square was a virtual museum of rare objects.

Prime’s active interest in the arts resulted in his being elected the first Vice-President of the Metropolitan Museum of Art in 1870.  A Library of the World’s Best Literature maintained “It is not too much to say that the great success of this splendid enterprise is largely due to the wise guidance of Dr. Prime.”

William C. Prime’s official relationship with the Museum came to a crashing end when the trustees decided to open on Sundays.  “Dr. Prime resigned as vice-president and as trustee,” reported a newspaper, “as he was opposed to Sunday opening.”

Signs of change to the sedate neighborhood were evident by 1876.  A streetcar now ran the length of 23rd Street.  To keep the cars in service following heavy snowfalls, workers shoveled the snow onto the sidewalks—some of it piling up in front of the stoop of William Cowper Prime.  The irate aristocrat sued the Twenty-Third Street Railway Company.

Judge Sedgwick’s decision, rendered on February 9 that year, was most likely only partially satisfying to Prime.  He ruled that the streetcar company had the right to remove the snow “for the purpose of enabling its cars to pass along the tracks.”  However he also warned that the snow “so removed heaped up” could not be allowed to remain in front of Prime’s house for an unreasonable period.

Following Mary Prime’s death in 1880, William remained in the 23rd Street home with his staff of servants.  Among Prime’s closest friends was Civil War General George Brinton McClellan.  Following the general’s death in Orange, New Jersey on October 25, 1885, his coffin was brought to New York and to the Prime residence.

On November 2, 1885 The New York Times reported that at 6:00 on the previous evening McClellan’s family and distinguished military figures arrived at No. 38 East 23rd Street.  “The body had arrived there an hour before them.  At 8 o’clock the undertakers transferred it to the black-covered coffin in which it will be buried.  There were many callers at Mr. Prime’s last evening, but none saw the body except the household.”

In light of Mrs. McClellan’s frail condition, the coffin was only briefly opened the following morning for friends who arrived prior to the funeral.  “Gen. McMahon said last evening that he regretted this decision, for the face was calm and natural, but that it was made because of the need, on account of Mr. McClellan’s health, of having the services over with the last possible delay.”

At 9:30 that morning the 14 pall bearers--most of them military leaders but also including banker John T. Agnew and eminent politician Abram S. Hewitt--carried the coffin to the nearby Madison Square Presbyterian Church.  The Square was thronged with onlookers attracted not only by McClellan’s fame, but by the high military pomp of the ceremony.

The aging Prime lived on in the house as more and more commercial buildings crowded in around him.  He continued his wife’s collection of rare porcelains and wrote Pottery and Porcelain of All Times and Nations.  Prime sought quietude at his country home in Franconia Notch in the White Mountains of New Hampshire.  Here he spent hours fishing.

When Prime’s collection of porcelain and ceramics proved too vast for the New York house, he donated it to Princeton University—but not without a few costly caveats.  The collection became the nucleus of Princeton’s art museum but, as reported by the New-York Tribune, “To receive it a fire-proof building was constructed by the university.”

In 1903 Prime was afflicted with rheumatism, but his general health was good.  Then in September 1904 he suffered a stroke of paralysis while at the Franconia Notch home and was brought back to the city.   Early in February 1905 he suffered another stroke and he died on Monday February 13.  The funeral was held in the 23rd Street house on February 15 at 4:00.

The Mayor of New York at the time was George B. McClellan, son of General McClellan.  He cancelled all appointments for a week.  When speaking about his father’s intimate friend, McClellan mentioned “It strikes me that the house in which Mr. Prime lived and died is the only one in use as a dwelling in the block in 23d-st. between Broadway and 4th-ave.”

The property that developers and real estate men had avariciously eyed for decades was suddenly available.   On January 29, 1907, after the valuable collections and furnishings had been carefully removed, Ralph E. Prime sold the house to James L. Breese for $100,000—more than $2.5 million in today’s dollars.

Within two months Breese had commissioned architects Snelling & Potter to remodel the Prime mansion into a commercial building.  The $15,000 in renovations included new interior walls, the removal of the stoop, a show window and electric elevator.

Breese leased offices in the upper floors including those of R. P. Breese, designers of motorboats and gas engines.  The retail store was leased to Rogers’ Misfit Parlors, owned by Joseph Morris and Charles B. Davis.  The men bought up overstock merchandise which it sold at bargain prices.  An advertisement in The Evening World on May 8, 1908 promised suits made to order for $35, $40 and $50 were selling for $12 and $15.

“These suits were made by the finest tailors of New York, Philadelphia, Baltimore, Washington and other cities, and were left on their hands.  They are perfect in every detail,” it read.

The enterprise did not go well and on May 5, 1909 Men’s Wear, a trade publication, announced that Rogers’ Misfit Parlors had declared bankruptcy.

In April 1912 James Breese embarked on further renovations designed by Brooklyn architects Koch & Wagner.  The plans called for new interior walls and replacement windows.  But the $8,000 renovations, like those of 1907, did not alter the façade above the second floor.

The renovated retail store became home to the Shed Rain Rubbercoat Company later that year.  But before long it would be replaced by a soda fountain, the Loft.   It was one of a chain of 13 soda and candy shops throughout the city.   William C. Prime, who had been incensed by the thought of the Metropolitan Museum being opened on Sunday, would no doubt have been shocked at the Loft’s announcement on December 23, 1916.

Because their patrons “have been inconvenienced by the inclemency of the weather and the crowded condition of our stores,” the Loft announced it would be open on Sunday, December 24 and on Christmas Day.

In August 1917 an advertisement listed the variety of chocolates and fountain treats available here.  It promised “The very best of everything served in generous quantities by skilled dispensers at Loft sanitary fountains.”

“Do you know of any Soda Fountain in the City that can offer so much?  You’ll be strong for Loft Fountains once you give them a try-out, and to-day offers a splendid opportunity.”

A variety of tenants took the upper offices, including the Army recruiting office of J. S. MacKay in 1919 and 1920; and Neblo Mfg. Co. in the mid-1920s, makers of Reddy Tees, the golf tees that promised to improve one’s game by five strokes.

In 1932 72-year old John R. Miller operated his rare stamp shop on the 4th floor here.  He was alone in the store when, according to The New York Times on October 21, “two youthful thugs entered and asked to be shown foreign stamps.”

Before Miller could produce the stamps, the men drew pistols and instructed him to put his hands in the air.  Instead, the elderly proprietor lunged at one of them, but he was pistol whipped and knocked unconscious.    The crooks escaped with $5,000 worth of stamps.

Miller was taken to Bellevue Hospital suffering from a fractured skull where he died.  But before his death the old man was able to give a complete description of the perpetrators.  The description led to the arrests of 26-year old Charles J. Culkin and 25-year old Nicholas Matosin.

The men pleaded guilty to second degree murder and Charles Culkin was sentenced to 40 years to life and Nicholas Matosin to 30 years to life.  At their sentencing on May 18, 1933, the court called Culkin “a monster and a fiend, who was a menace to society.”   The Assistant District Attorney, Charles Pilatsky, reported that “a lunacy commission had pronounced Culkin a moral imbecile.”

On Christmas Day 1952 a fire broke out in Peter’s Twenty-third Inc., a toy and novelty store.  It started in the basement where toys were stocked around 8:30 in the morning.  The New York Times reported that it “laid a heavy blanket of smoke over the neighborhood for half an hour before firemen could bring it under control.”  The entire stock was destroyed, but the damage to the building was confined to the basement. 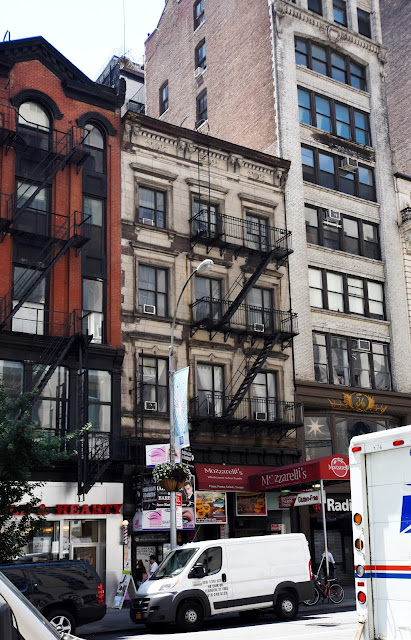 Today the ground floor is shared by a jewelry repair store and an Italian restaurant.  A fire escape zig-zags down the upper façade of the old Prime mansion where bits of marble veneering have flaked away. But with a little imagination, the passerby can recognize the old house where the funeral of a Civil War general was held and where rare porcelains and woodcuts were once housed.