Fitting In -- No. 83 Washington Place 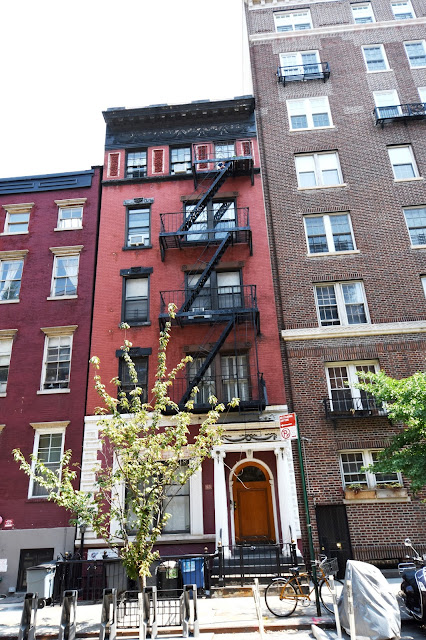 Although Washington Square in 1880 was still an upscale residential enclave lined with private mansions, the blocks branching off the park were seeing change.  Federal style homes were rapidly being converted to boarding houses or demolished to be replaced to chic hotels and flats.

Charles P. Gould lived at No. 83 Washington Place that year, just steps from Washington Square.  His home would survive almost to the end of the century; but not before joining the boarding house trend.  On August 7, 1893 and advertisement appeared in The Evening World offering “Lovely rooms, every convenience, light housekeeping if desired, privileges.”

“Privileges” to those seeking boarding house accommodations were the use of rooms like the parlor and library.

Developer Blakeslee Barnes purchased and demolished the old residence.  He commissioned the nearly unknown firm of Quimby & Browne to design a five story apartment building to replace it.  Completed in 1899 the new building tried hard to meld into the architecture of the neighborhood.

The portico, sitting atop a shallow three-step brownstone stoop, was essentially an updated version of those found on the grand mansions along Washington Square North.  Pretty paneled stone lintels were directly inspired by those found in the Federal homes of the 1820s and ‘30s.  The slender cornice below the fifth floor took the form of a fasces.

The architects’ concessions to modern times included the vast lobby window, the swag motif—so popular at the time—on the portico entablature and the below the cornice, and the up-to-the-minute treatment of the fifth floor where ornate terra cotta panels separated the openings.

Blakeslee Barnes transferred to the title of the completed building to Margarette P. Barnes (possibly his wife) on June 19, 1900 for a recorded $38,000—a little over $1 million.

Among the first residents in No. 83 Washington Place were the well-to-do J. Milton Gitterman and his wife, Alice.   The couple generously donated to worthy causes and Alice’s name annually appeared on the membership rolls of the State Charities Aid Association.

Alice Stern Gitterman had graduated from Smith College in 1891, and then studied English at Columbia University in 1894.  The erudite woman had barely settled into No. 83 Washington Place before she embarked on a mission with a co-resident, Mrs. Maud Schofield Beeson.

A developer had announced that Alexander Hamilton’s estate, Hamilton Grange, was to be chopped into building lots during the summer of 1900.  The mansion had already been moved about half a block, but now Alice and Maud were concerned as well about the loss of 13 trees on the estate planted by the former Founding Father.  They leaped into action in an effort to convince the Legislature to pass the Hamilton Grange bill.

Calling the loss of Hamilton’s estate “proposed vandalism” the women began circulating a petition asking that the State appropriate $50,000 for the purchase of the Washington Heights land “upon which are standing thirteen trees planted by Alexander Hamilton.”  On April 1, 1900 The New York Times instructed readers who were interested in signing the petition “to correspond with Mrs. Maud Schofield Beeson or Mrs. J. M. Gitterman, both of 83 Washington Place.”  The newspaper added that “the number of signatures has already reached a high figure.”

The women were only partially successful.  Although the trees were temporarily saved, by the spring of 1907 they had been cut down “and their wood to be used by boys for bonfires,” as one newspaper reader lamented.

When No. 83 Washington Place first opened its doors Greenwich Village was luring artists, musicians and writers to what was becoming New York’s Bohemia.  Another of the building’s initial residents was sculptor Albert R. Ross whose studio was at No. 156 Fifth Avenue.  He was awarded the somewhat disappointing second place prize for his design of the proposed Francis Scott Key Monument at Fort McHenry in 1916.

Playwright and theatrical manager Edgar Selden and his wife were also original tenants.   Selden had written successful plays like McKenna’s Flirtation, A Hot Old Time and Will o’ the Wisp.  By the summer of 1901 Selden’s heath was a serious concern.  On June 6 The New York Times reported “Mr. Selden is lying dangerously ill with neuritis at his home, 83 Washington Place.”  An “uncommonly excellent list of artists” banded together to stage a benefit performance for Selden at the Herald Square Theatre on Sunday June 2.

Edgar Selden’s recovery was possibly too complete for his own good.  He and his wife had been married since December 27, 1887; but almost to the day in 1903 he found himself sued for divorce.  Mrs. Selden accused him of carrying on an affair with Attie Spencer, the star of his musical production Peck and His Mother-In-Law Abroad.

Other residents at the time included wealthy lawyer William H. Law, who held memberships in the exclusive Manhattan, University, Yale and Union Clubs; and Charles Lincoln Andrews, the publisher of The Nation and The Evening Post.

Another journalist in the building was Lindsay Denison and his wife, the former Bertha Lee Bennett.  Well-recognized and highly respected, the reporter had followed Theodore Roosevelt across the country in his 1900 campaign.  Their friendship was reflected in a letter the President sent to Denison on October 18, 1902:

I liked both articles of yours in Everybody’s Magazine very much.  I shall show Mrs. Roosevelt the one in reference to small Archie; and I want to thank you for the good taste with which you wrote it – you even omitted his name. As for the other story, is it a true exposition of life among orphans?  It is both melancholy and powerful.

At the time, Denison was on the staff of The Sun (one journalist called him “the great star of The Sun"); but he would soon join The New York Evening World.  Bertha, like Alice Stern Gitterman, was a graduate of Smith College.  She served as Secretary of the Women’s University Club in 1906.

Another journalist in the building was Harold deWolf Fuller who had moved in by 1914. Fuller had taken over as editor of The Nation from Charles Lincoln Andrews by now.  He would remain in the building into the 1920’s by which time he added the editorship of The Weekly Review to his resume.

James S. Hamilton was living in the building in 1929 when he received a letter from English poet A. E. Housman.  The correspondence, in response to a request from Hamilton, is archived in the Boston Public Library and gives only a tantalizing hint at the original letter.

I shall not make any objection to your brother singing your setting of my poem.  I admire the truth and honesty of what you say about composers.  Illustrators are the same.

Yours Sincerely,
A E Housman

Edward Dalton Stevens shared a three-room apartment with his brother, William, here in the 1930s.  Both men were artists and Edward made his living illustrating magazine covers—often detective and men’s adventure publications.  The brothers shared a rented studio at No. 51 West 10th Street.

In 1939 Edward Dalton Stevens was 61 years old and not only his hearing, but his eyesight was failing.  As an artist, his vision was his livelihood.   Stevens grew more and more depressed over his worsening condition.

Around 6:30 on the evening of August 14 William returned home to find his brother dead.  The New York Times reported that “Despondent because he could no longer see to draw and paint, and also was going deaf,” he had shot himself.    Edward left two notes for William, apologizing for having become a burden and explained that he can contemplated his suicide for some time.

Tenants throughout the next few years included columnist Clifford Langford-Baker who wrote for The Montreal Star, and television pioneer Ernest Walling.  Walling had been a television director since the earliest days of the medium.  Although he directed several series, including “The Mask,” and “Charlie Wild, Private Detective;” Walling was best remembered for his soap operas, including “The Edge of Night,” “The Guiding Light,” and “Another World.”  He died in his apartment here on December 19, 1970 at the age of 58. 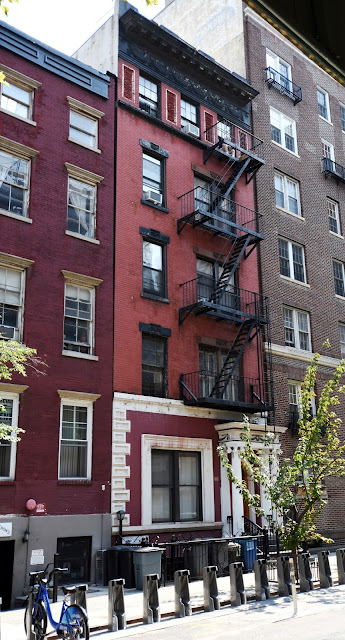 Although the first floor of No. 83 has been given an unnecessary and tawdry coat of red and white paint; it survives essentially unchanged—a highly interesting turn of the century attempt at contextual architecture.