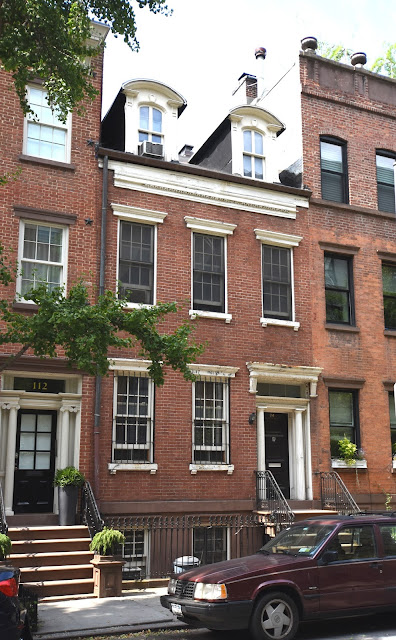 In 1825 New York City doctors recognized the first signs of a terrifying disease—cholera.  Only two years earlier citizens had endured an epidemic of yellow fever.   At that time many residents with the means to do so fled north to the sleepy village of Greenwich.  Now an even greater threat loomed.

By 1827 the overcrowded city faced a full-scale cholera epidemic.   Soon Greenwich Village would receive another wave of refugees.  The New York Evening Post later recalled that in 1832 “the roads, in all directions, were lined with well-filled stagecoaches, livery coaches, private vehicles and equestrians, all panic-struck, feeling the city as we may suppose the inhabitants of Pompeii fled when the red lava showered down upon their houses.”

The rapid population growth required additional homes and commercial buildings.  Enterprising builders, like John Nichols, bought up plots and quickly raised Federal-style homes for the village’s new residents.   In 1832 he purchased nine building lots on Washington Place, not far from his own home on Grove Street.  It seems he quickly realized that he had bitten off more than he could chew and resold two of the plots to two other men in the construction business—Ephraim Scudder, a mason, and builder Nathan H. Topping.

Nichols teamed with other men in the building business to erect his seven houses that stretched from No. 106 through 122 Washington Place.   The first homes were completed in 1832; and the entire row was ready for sale in 1833.   No. 114 became the home of merchant Joseph Annin in 1833.  Like its neighbors, the two-and-a-half story house was faced in red Flemish-bond brick and sat above a brownstone basement level. 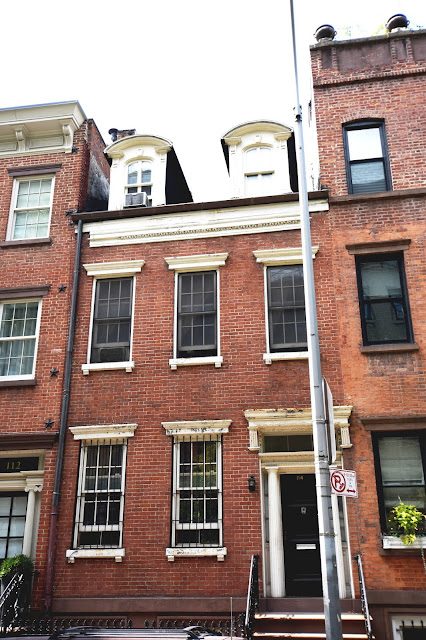 Handsome details raised the house above the working-class homes being erected elsewhere in the Village.  The iron fencing featured a popular acorn motif along the lower edge.  The designer of the stoop railings forewent fancy newels in favor of turned-under handrails.  The doorway, flanked by fluted Doric columns, was surmounted by elaborate carvings.  Above it all, two especially attractive dormers—with pilasters, segmentally-arched windows with keystones, and arched cornices—punched through the peaked roof.

How long the Annin family lived in the house is unclear; however they would retain possession of it for more than a century.  About a decade following its completion, the Annins gently updated the appearance of the house by adding Greek Revival-style palmettes to the areaway fencing.

In September 1886 architect and builder Robert Huson was hired to modernize the No. 114 again.  A two-story brick extension “for bathrooms” was added to the rear.  The renovation, costing $4,000, most likely also included the new pressed metal cornice over the entrance, the sheet metal lintels installed over the brownstone originals, and the little corbels added below the sills.

The house was being operated as a boarding house at the time, run by Josephine Lowerre.  Among the boarders was Peter McLarty.  He also used the address for his business activities and on February 11, 1888 an advertisement appearing in The Publishers’ Weekly announced that the new U. S. Official Postal Guide was available by mail order from him here.  A cloth-covered edition would cost the consumer $1.50.

An advertisement in The Sun on December 2, 1891 offered “Large handsomely furnished sunny room; two folding beds; hot and cold water; also single room, $2.”   That double room may have been available because its former resident was unable to find someone to share the costs.   Just a month earlier, on November 7, someone advertised “Gentleman having nicely furnished sunny room, two folding beds, would like another gentleman to share.”

At the turn of the century the house was operated by a Mrs. Webber.   The Spanish-American War had been over for nearly two years and as the fall of 1900 approached, 32-year old Thomas Gilroy, recently discharged from the Third United States Infantry, arrived at No. 114 Washington Place.

Gilroy took a room in what The New York Times referred to as “Mrs. Webber’s furnished room house.”   The landlady later revealed that the former infantryman had contracted “fever” in Cuba.  Statistics would later show that 968 American soldiers died in combat during the war; but more than 5,000 succumbed to yellow fever.

Thomas Gilroy lived quietly in the house for several weeks.  Mrs. Webber noticed in the first week of September that he seemed more depressed than usual.  But, she would later say, he volunteered no explanation and she sought none.

Shortly after noon on September 11, she smelled the odor of gas in the hallway.  When she entered Gilroy’s room, she found him face down on the bed with the rubber tube for the illuminating gas coiled around his neck, the end of it in his mouth.  A doctor from St. Vincent’s Hospital said he had been dead for an hour.  Sadly, The New York Times reported “nothing is known of any relatives.”


By the 1920s, the stigma attached to single women living on their own was dissipating.   In 1926 Rosalind Morley lived in the boarding house formerly reserved for “gentlemen.”   Rosaline worked during the day, but was determined to follow a career in art.  She enrolled in the Cooper Union Night School of Art where her obvious talent was honed.

On April 7, 1926 she competed with about 50 other art students in the Society of Beaux Arts Architects’ architectural competition.  The theme was “Decoration of an Entrance Hall of a Private Library Building.”  Rosalind’s submission won her “first mention.”  The following month hers was one of 21 drawings submitted to the Beaux Arts Institute of Design’s mural contest.   The Times reported “The problem of an advanced grade, presented jointly by the Departments of Painting and Architecture, called for a mural suitable for the end wall of an assembly hall, the scene to represent music.”  Rosalind Morley was awarded second mention for this submission.

By 1937 the stage and motion picture actress Genevieve Belasco, cousin of producer David Belasco, was living here.   Her greatest film credit came when she appeared in Cecil B. DeMille’s 1923 epic The Ten Commandments.   In 1937 Saks department store celebrated its 35th anniversary.  As part of the festivities, it initiated a search for the first customer who entered its Herald Square store on October 2, 1902.

Genevieve recalled crossing Herald Square before noon that day “with a group of other girls in the chorus of a popular revue.” She said that on the way to an early rehearsal they “paused at Saks to buy flowers.”   The actress received a $10 gift certificate for being one of the original customers.

The following year No. 114 was converted to a triplex, with an apartment in the attic.  By now it was the only one of the original row that had not been significantly altered.  While all but one of its neighbors had been raised to three full floors, the little house retained its Federal proportions.

The two-apartment configuration, however, would not last long.  When the estate of Margaret Annin sold the house in January 1946—the first change in ownership since 1833—The Times said “the building now comprises four apartments.”   Assessed at $17,500 at the time (a little more than $210,000 today), it was purchased by Emil Talamini.

Private house living in Manhattan in 1957 was far different than it would be half a century later. When working parents Jerry and Sunny Fritz began looking for a new place to live with their two children, they were paying $185 a month for a four-room apartment.

The couple, who both worked in television and theater, embarked on a year-long search with a real estate agent.  A major consideration was their limited finances; but they finally settled on No. 114 Washington Place, which needed obvious upgrading in plumbing, wiring and 1950s conveniences.  They spent $40,000 on the house (their mortgage was $1,460 per year) then set to work renovating.

With a lack of historic sympathy typical of the period, architect Lowell Brody stripped the plaster walls to expose brick and discarded 1833 mantels.   Once the original details were gone, the family introduced antiques to give the home a feeling of age.  When the renovations were completed, The New York Times’ journalist Rita Reif reported on January 3, 1961 “Their move has tripled their living space and reduced their monthly costs.” 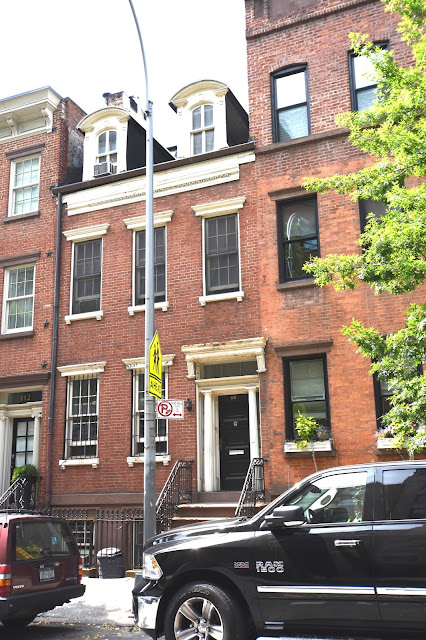 Thankfully, Brody considered the exterior of the home “in good shape.”  As a result, the charming survivor of John Nichols’s row looks much as it did following the limited late Victorian updating.

photographs by the author
Posted by Tom Miller at 12:47 AM