For decades at the turn of the last century the three four-story brick houses at Nos. 154 through 158 West 18th Street had suffered a chilling tradition of death and illness.   In the first years after the end of the Civil War they were operated as rooming houses.  No. 154, in 1874, was noted by the Department of Health as having four cases of diphtheria—among the “largest number of cases” in the city.

The block--lined mostly with stables--housed residents with only the most meager means.  In 1899 Kate Freeley lived in that house.  A servant, she disappeared that year after a man called at her room and offered her a position.  The headless body of a woman found months later was assumed to be that of Kate.  Three years later, in August, the body of 85-year old Annie Rockwell was found on the floor of her room.

And in 1904 James Bell and his wife lived in two rooms at No. 154.  In June the old woman became ill; but Bell had no money for a doctor.  When she died, he could not afford to bury her.  Unwilling to leave her body alone, he refused to leave his rooms to get food.

On June 26, 1904 The New York Times reported “James Bell, an octogenarian, was found last night so weak from lack of food that he was not able to walk in one of his two rooms at 154 West Eighteenth Street.  In the other room was the dead body of his wife, who was seventy years old.  The old man said that his wife died several days ago.”

A saloon operated from the first floor of No. 158 while rooms were rented in the floors above.  All three houses were owned by Arthur J. Collins; and the seamy conditions here would come to an end when on May 26, 1905 he sold the properties to Charles Hellmuth.

Hellmuth was a highly-successful manufacturer of printing and lithographic inks and varnishes.  His company was also the sole U.S. agent for the Kast & Ehinger ink makers of Germany.  By now he operated a substantial factory and maintained a branch office in Chicago.  In reporting on his purchase of the three old houses, the Real Estate Record and Builders’ Guide noted that he “will erect a new fireproof building for his own occupancy.”

Adolph Schoeller was a partner in the architectural firm of Forhling & Schoeller at the time.  But somewhat surprisingly the Record and Guide mentioned only Schoeller on June 24, 1905 in reporting on the projected structure.  Estimating the cost of the Hellmuth Building at $250,000, it reported “plans specify a brick and terra cotta exterior, iron stairways, elevator, galvanized iron skylights, cornices, steam heat, electric lights, slag roof, etc.”

The reason for the omission of Schoeller’s partner became evident a little over two weeks later when the same publication announced on July 15, “The firm of Frohling & Schoeller, architects, has been dissolved.  Mr. Adolph Scheller continues in business at 31 Union Square West.”

Schoeller ventured into an area rarely visited by Manhattan architects—that of Art Nouveau.  While Paris exploded with the sensuous and—to some Victorian minds—startling curves and forms; Manhattan’s conventional minds seem to have disapproved.  While a few architects, like Emery Roth, embraced the avant garde style; most avoided it altogether or cautiously dipped into its more restrained sub-styles. 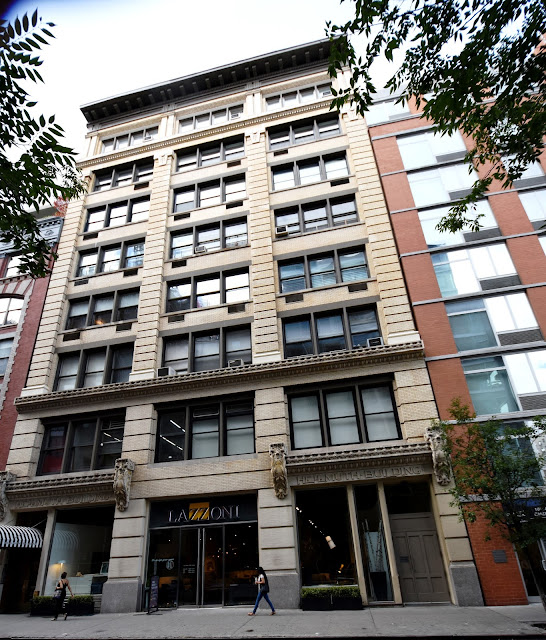 And so it was with the upper seven stories of the eight-floor Hellmuth Building at No. 154 West 18th Street, completed in 1907.  The more-or-less commonplace factory building was faced in tan brick.  Rusticated brick piers separated the vast openings, ornamented only by tepid capitals influenced by the Vienna Secession movement.

Designed to house printing firms (the top four floors were relegated as leased space), the interior ceilings were constructed of robust brick barrel vaults—capable of supporting the heavy presses and other machinery.  The manufacture of printing inks required the use of highly flammable ingredients.  To reduce the possibility of catastrophe, a heavy brick vault was constructed in the basement where the mixing of volatile chemicals would take place.  In addition, a sprinkler system and automatic fire alarm was installed.

In December 15, 1906 the Record and Guide reported that 50,000 square feet “in the new fire-proof building in course of construction” had already been leased “for a long term of years at an aggregate rental of about $125,000.”

That unnamed tenant was most likely F. J. Emmerich & Co., dealers in “hanging papers;” one of the Hellmuth Building’s first renters.   Just weeks later the building was ready for occupancy and Walden’s Stationery and Printer reported “Charles Hellmuth, manufacturer of inks and dry colors, has sent out a very pleasing removal notice, colored in brown and green, announcing the occupation of the new premises in the Hellmuth building, 154 West Eighteenth street.”

By 1915 the Albodon Company had taken the entire 8th floor.  Unlike the printing and paper industry-related tenants, it manufactured “tooth cream.”  A 1916 advertisement in The Evening World admonished readers that “your dentist is interested in the dentifrice you use.  He would like to have you try at least one tube of Albodon to see for yourself how much better it cleans.”

The firm marketed its product saying “It is a cream, not a paste.  It does not melt or harden.  It has no grit.  It is not colored.” The consumer could purchase “a liberal tube” for 25 cents.

On November 27, 1916 the unthinkable happened.  A staggering 900 employees were at work in the building, “about half the number [were] women and girls,” according to The Evening World later that day.  Early in the afternoon a Hellmuth employee named Shanz went to the basement vault to mix chemicals, the main ingredient being benzoil.  Suddenly flames shot out and Shanz was burned about the head and face.

“For a few minutes employees of the company tried to fight the blaze, but, seeing they were making no headway, an alarm was turned in,” reported The Evening World.   In the meantime the automatic sprinkler system and alarm had been triggered.  The hundreds of employees “marched to the street in order.”

Firefighters responded to the smoke-filled basement.  As they fought the blaze, a vat of benzoil exploded, knocking the men to the floor and “painfully” burning them.  Other firefighters dragged the men to street and fresh air.

The brick vault did the job for which it was intended.  Fire officials reported “The fire was confined to the vault in which it started.”

As was the case with most firms owned or run by German-born Americans when the U.S. entered World War I, the assets of the Charles Hellmuth company were confiscated by the United States Government in 1917.  Deemed “alien property” by the Trading With The Enemy Act of 1917; the assets were eventually repurchased by Bernard Richmond Armour who had taken over the Hellmuth presidency in 1919.

The T. J. Hayes Printing Company was still in the building when its founder died on August 27, 1925.  Having arrived as an Irish immigrant boy around 1855, the elderly Timothy J. Hayes had amassed sizable personal wealth.  The firm would continue to do business from the 18th Street location at least into the 1940s. 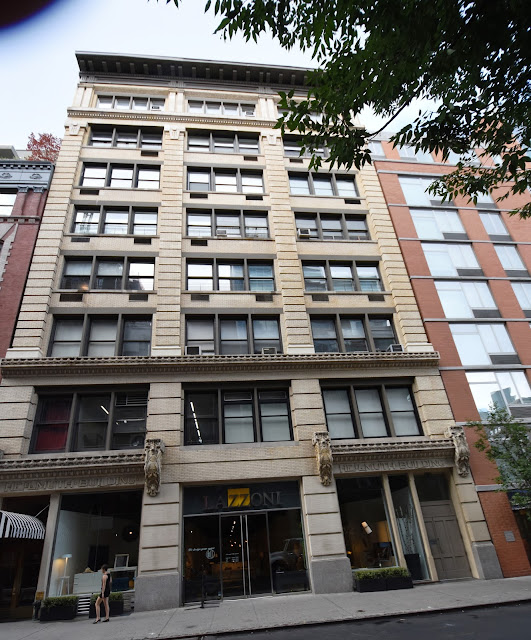 In 1935 80-year old Louis Kessell was employed by Charles Hellmuth, Inc. as its paymaster.  A veteran of the Franco-Prussian War of 1871, he was still a feisty old soldier at heart.  At 5:00 on the afternoon of June 10, 1935 he was sitting in his small room on the ground floor.  On his desk was a metal box containing about $1,000 in cash.

Suddenly a “thug” rushed into the room, landed a blow on Kessell's head with a cloth-wrapped club, and grabbed the money box.   The old man, knocked to the floor, took a second to recover.  Then, according to The New York Times, he “rose to his feet, shook his head to clear it, grappled with the intruder, and began to pummel him.”  The shocked thief had not anticipated a fight from the spirited octogenarian.

“By the time help arrived the would-be robber had fled,” said the newspaper.  “The $1,000 was saved, although scattered about the compartment during the tussle.”  Louis Kessell’s injuries were a bump on the head.

Stanley Gould would be less lucky two decades later.  The 36-year old salesman, less than half Kessell’s age, worked for his family’s Gould Offset Printing Company here.  On December 3, 1954 he entered the building’s elevator with $1,800 in cash, the firm’s payroll.  Two men got in the cab at the same time.

Gould was later found bound and gagged in the elevator car.  The thieves escaped with the cash.

In 1973 the Hellmuth firm, now known as Sleight & Hellmuth, left their headquarters of nearly 70 years.  In 1988 the building was converted to 28 cooperative apartments featuring the wonderful scalloped ceilings originally intended to support printing machines.  The ground floor has been only slightly altered; leaving the Art Nouveau brackets and panels-- rare and wonderful in Manhattan—as architectural eye candy. 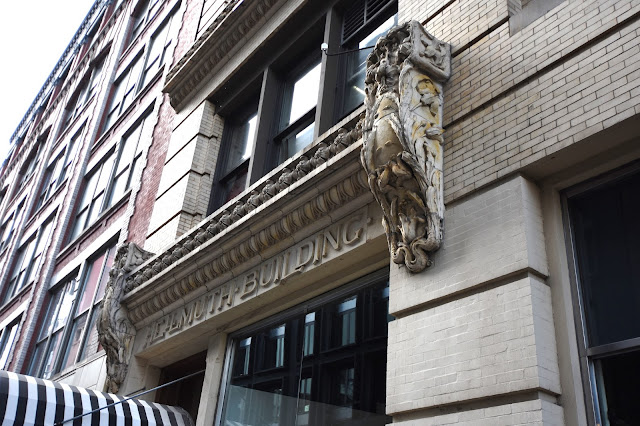