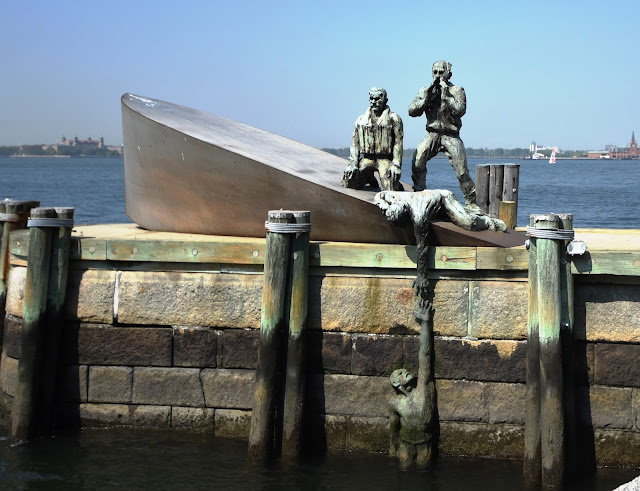 By the time the Second World War broke out, the Merchant Marine had cleaned up its act.  Notorious in the 19th and early 20th century for shanghaiing drunken sailors and for sometimes nearly insufferable conditions that included floggings, it now boasted an Academy run closely along the lines of the military.

Even before the United States entered the conflict, the Merchant Marine was pulled into action to transport supplies and fuel to the allies.  There were approximately 55,000 Merchant Mariners in 1940 and an aggressive recruiting effort resulted in swelled numbers.  Long-retired Mariners came back to service to help the war effort.

According to American Merchant Marine at War, James A. Logan was one of the old salts.  At the age of 76 he returned to serve as cook aboard the SS Joshua Hendy.  And Thomas Cavely, who had been master on the Staten Island Ferry, took command of another Liberty ship.

Unlike the U.S. Navy, the Merchant Marine was able to accept sailors with physical defects—heart or sight problems, for instance—or who were either too young or too old for military service.

Following the attack on Pearl Harbor and America’s entry into the war, Merchant Marine service was both more important and more dangerous.  German submarines focused on the American tanker fleet, manned by the Merchant Marine, that brought essential fuel to England and Europe.

Among these tankers was the SS Muskogee.  On March 22, 1942 it was transporting oil to England.  Captain William Betts was in command of the ship and its crew of 34.  The ship was spotted by the Nazi U-boat U-123.  Captained by 28-year old Reinhard Hardegan, the submarine was tasked with stopping American oil deliveries.

A single torpedo found its mark.  As the SS Muskogee sunk, members of its crew clung to the sides of the ship.  One German crew member snapped photographs of the desperate Merchant Mariners.  Seven Americans, including Captain Betts, made it to a life boat.  Betts pleaded with Captain Hardegan to be brought aboard the U-123 as prisoners.

As his crewman snapped photos, Hardegan replied that there was no room aboard the submarine.  The life boat was left adrift and none of the Muskogee’s crew was ever seen again.

By the end of the war, hundreds of Merchant Marine ships had been sunk.  Six hundred and thirty-three Merchant Mariners had been taken prisoners of war and 6,600, including the crew of the SS Muskogee, had given their lives.

Over the subsequent years, the role of the Merchant Marine in the war was little remembered.  In 1976 the American Merchant Mariners’ Memorial, Inc. was organized to commemorate the thousands of merchant ships and mariners that contributed to American military service since the Revolutionary War.  A competition for the design of a memorial was held in 1988.  The commission was awarded to French-born sculptress Marisol Escobar. 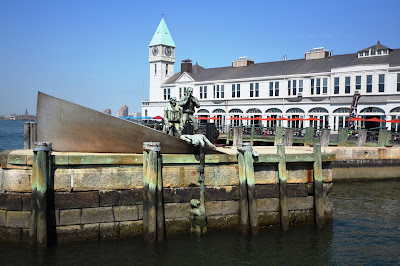 Escobar had chosen the events of March 22, 1942 to exemplify the heroism and contribution of the American Merchant Marines.  Somewhat incredibly, the photographs taken by the German sailor that day had survived.  Using the photograph of the Muskogee’s crew members clinging to the sinking ship, she developed a sculptural grouping of four figures and a stylized bow.

Installed on an obsolete stone pier off Battery Park, it was dedicated on October 8, 1991.  Escobar’s powerful and moving grouping captures the last moments of the sailors’ lives.  With no hope of survival, one man still tries desperately to rescue his comrade in the water—their fingertips almost touching.

The disquieting depiction is made more so with the ebb and flow of the tides.  At high tide the sailor in the water is almost completely submerged; only his forearm extending in frantic desperation above the waves. 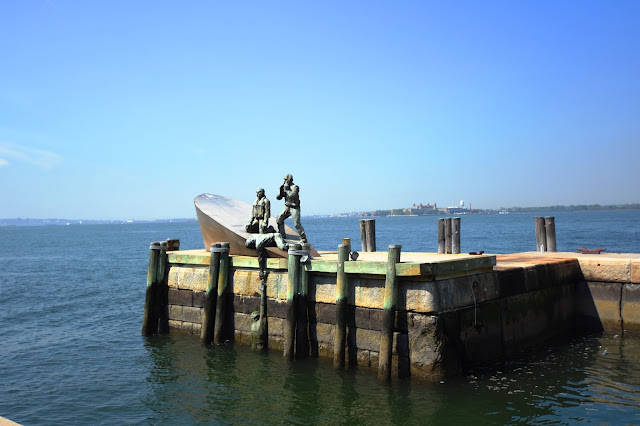 Marisol Escobar’s potent work of art—a fitting tribute to wartime Merchant Mariners—is too-often overlooked because of its out-of-the-way location.  It is worthy of a side trip.