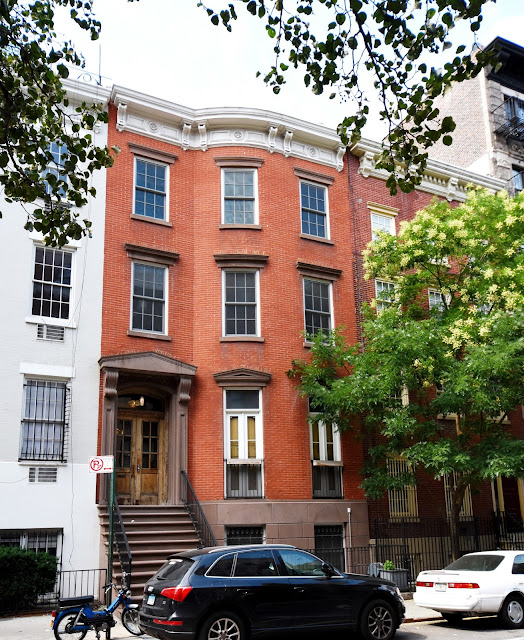 As the Chelsea neighborhood saw rapid development in the first half of the 19th century, an ambitious row of upscale homes appeared on the south side of West 15th Street between Seventh and Eighth Avenues.  The handsome residences fully engulfed half of block, from just off the corner of Seventh Avenue to No. 230, halfway to Eighth.

The anchoring home, No. 230, stood out.   Like its carbon copy Italianate neighbors, the red brick house boasted a high brownstone stoop, stately pedimented entrance with leafy, scrolled brackets, and elegant paneled and bracketed cornice.  Double doors with arched openings led to the entrance halls.  But No. 230 went a step further by bowing two of the three bays gently forward; providing a graceful and façade and additional interior space.

It became home to the well-to-do family of merchant Joseph Bento, whose business was at No. 84 South Street.  On April 24, 1847 the New-York Daily Tribune notified its readers that old Bento and his wife had returned home on the brig Oriole from Rio Grande.

The Civil War was drawing to a close and the Chelsea neighborhood was already changing.   Within the next two decades the upscale homes would rapidly change from private residences to boarding houses.   Before long the Bento house would follow suit.

N. B. Cozzens was living in the house on October 18, 1888 when he opened The Evening World.  The newspaper had printed a puzzle—a composite of features when snipped out of the paper and properly folded, formed a portrait of British Prime Minister William Ewart Gladstone.   The Evening World promised that the names of the first ten readers who sent in correct solutions would have their names printed in the next day’s issue.

Cozzens set himself at solving the puzzle and, having done so, rushed his envelop to the post box.  He barely beat out hundreds of other subscribers.

The following day The World announced “That Gladstone face puzzle published yesterday may be a very good thing to bewilder the slow-moving wits of the Londoners, but The Evening World readers made short work with it.

“Practical as they are at solving all sorts of puzzles, they went at that composite picture yesterday with an ingenious zeal that should shame their British cousin.”  The newspaper estimated that at least 800 solutions had already arrived at its offices.  Among the first ten to arrive was that of a very proud N. B Cozzens. 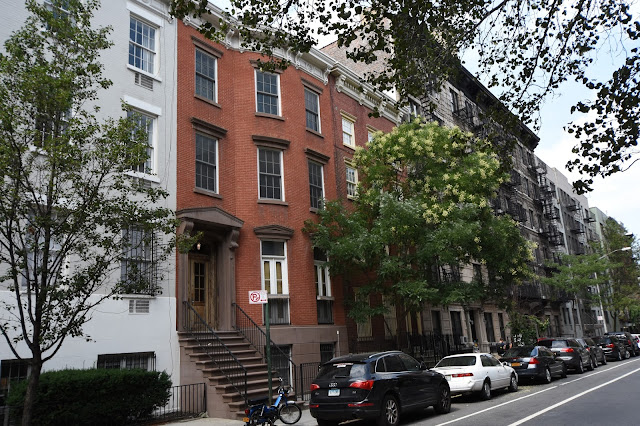 Boarding here in 1893 was Toronto resident John A. Taylor.  Taylor’s publishing business included a New York office at Nos. 10 and 12 Vandewater Street.   When in town he lived in rooms in the 15th Street house.   Around the first week of May 1893 the 36-year old left his wife and five children in Canada, headed to New York.   A week later the 36-year old man left his office and instead of returning to 15th Street, he stayed overnight at the Colonnade Hotel on Lafayette Place.  He left there the following morning and disappeared.

On May 25 The American Stationer reported that Taylor’s brother-in-law, David Blackley had arrived in New York in search of him.  It described Taylor as “5 feet 8 inches in height and not stout.”

The New York Times sent a reporter to Blackley’s hotel room.   He said “I cannot account for my brother-in-law’s disappearance. I think his mind has become unbalanced.  He seldom drank, but when once started, he very soon became irresponsible.  His affairs are all right and his domestic relations pleasant.”

The hint of alcohol was picked up by The Evening World which reported that Blackley “has intimated that Mr. Taylor might be on a spree.”   The newspaper admitted that “Taylor is not a drinking man, and the last time that he is known to have been under the influence of liquor, it is said, was about three years ago.”

The mysterious case of the missing publisher was eventually disappeared from the news.   Whether Taylor was ever found is unclear.

At the time of Taylor’s disappearance No. 230 West 15th Street was owned by the Fitzpatrick family.  A small fire broke out in the house that year on October 13th at 8:30 p.m., but was quickly extinguished.  Within three months a much worse tragedy would strike when on New Year’s Day, 1894 Elizabeth Gertrude, the seven-year old daughter of boarders Frederick and May Meyer died in the house.

Other boarders continued to be respectable and middle-class.  On September 1, 1900 James H. Sturges started his new job as a “temporary clerk” for the City, earning $3 per day (about $23,000 a year today).

Henry Kleinpeffer was a 44-year old waiter living here two years later.   Shockingly, The Evening World reported on September 19 that he “committed suicide this afternoon by hanging himself.”  Later that day the newspaper expanded on the story, saying “Henry Kleinpeffer, forty-four years old, was found dead at No. 230 West Fifteenth street, with a handkerchief tied around his neck, a suicide.”

Apparently Kleinpeffer had no family and few close friends.  His funeral was held, instead of in the parlor of a private home or in a church, at the Stephen Merritt Burial Co. on Eighth Avenue at 19th Street.

The Fitzpatrick family sold No. 230 in 1903 to A. V. Whiteman, maker of “milk jars.”   Five years later he sold it to newlyweds Henry William Lyding and his wife, the former Juliana Brandsema.  The Lydings returned the house to a single family residence as Henry studied at the New York Homeopathic Medical College.  Following his graduation in 1913, the English basement was converted for his practice.

That year the North American Journal Homoeopathy announced that Dr. Henry William Lyding “has opened an office for general practice” in the house.  He saw patients from 8 to 10 a.m. and 5 to 7 p.m. on weekdays and on Sunday from 8 to 10:00 in the morning.

As the years passed, Lyding focused on diseases of the eye ear, nose and throat.  He was on the surgical staff of the New York Ophthalmic Hospital.  The Lydings had two children, Charles and Eleanor and summered at their country home in Brentwood, Long Island.  It was there, on Sunday night, July 16, 1933, that Henry Lyding died at the age of 49.

In 1950 the house was sold to the Roman Catholic Church of Our Lady of Guadalupe, located nearby on West 14th Street.   It was converted to the church’s Parish House.

By the end of the century the homes of the once-elegant row had been altered to different extremes or, in some cases, demolished.  Few of the stoops remained and nearly all facades had been painted.  No. 230,too, was slathered in paint, its stoop was gone, and the leafy-bracketed entrance had lost its detailing.

But an overall restoration by Preserv, completed in 2008, brought No. 230 back from the brink.  The stoop was reconstructed, as were the damaged sills and lintels, the masonry repaired and the paint removed from the brick.  Today No. 230 West 15th Street is again a single family home, looking much as it did when Joseph Bento and his wife returned to New York from Rio Grande in 1847.