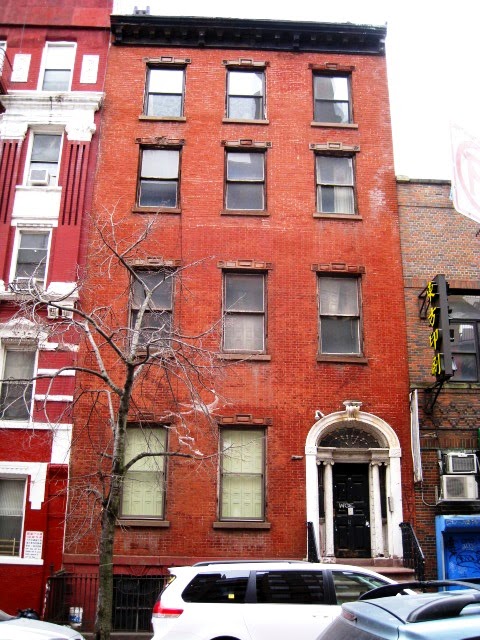 In the years following the Revolutionary War, residential development of the northern fringes of New York City increased with a fervor; only to be slowed by the War of 1812.   But construction resumed shortly after the conflict’s end in 1815.

Catherine Market was established in 1786 between Catherine Street and Market Slip.  Even as the blocks near the river changed to a fashionable residential neighborhood, Catherine Market stayed, giving its name to Market Street.

In 1824 merchant William Clark began construction of a fine brick-faced Federal style home at No. 51 Market Street.  According to a descendant in 1892, Clark “when 19, started a notion store, and was after a wholesale grocer and dry goods merchant.”  Born in 1785, he was 24 years old when directories first listed as a grocer at No. 14 Newslip, at the corner of Front Street in 1809.

Clark had married Charlotte Mandeville of Peekskill, New York the year before.  But their marriage would be short.  Charlotte died less than two years later on February 24, 1811.  Almost immediately after his period of mourning elapsed he married Mary Bogart on April 7, 1813.

William and Mary moved into a house at No. 63 Catherine Street that year.  Their first child, Mary, was born just short of nine months later, on December 28.  The family continued to grow and the Clarks moved to No. 86 Catherine Street in 1816 and to No. 43 Market Street a year later.

Directories continue to list William Clark and his family at No. 43 Market Street until his death there on November 7, 1836.  On that day the New York Evening Post reported “This morning, William Clark, 51 yrs, 43 Market St. died at age 51.”  It could be that Clark never intended to live at No. 51; building it for income purposes.  Or perhaps the numbering of Market Street changed in the mid-19th century.

Either way, No. 51 was completed in 1825, a superb example of the high-end residences that were filling the neighborhood.  The architect splashed the two-and-a-half story façade with costly extras that merely hinted at the luxurious interior appointments.  The openings of the brownstone English basement featured Gibbs surrounds named for the English architect James Gibbs.   The red brick was laid in Flemish bond and highlighted by outstanding paneled lintels with end rosettes.

It was the doorway, however, where the architect pulled out all the stops.  Within the carved stone entranceway an eight-paneled door sat within fluted Ionic columns, in turn flanked by matching half-columns.  Leaded sidelights lightened the composition and allowed daylight into the foyer.  Above it all an exquisite leaded fanlight stole the show.  Combined, the elements spoke of refinement and wealth.

In rather stark contrast to the elegant doorway, the wrought iron fencing was nearly Spartan; its decoration relying on acorn finials interspersed with classical urns.  The urn motif was, interestingly, more expected in France and England at the time.

Interestingly, on October 19, 1835 the Board of Assistants passed an ordinance “for the correction of a nuisance at No. 51 Market Street.”  On October 29, the Mayor approved it.  The minutes of the Proceedings of the Boards of Aldermen are painfully vague as to what the “nuisance” was.

Before all of this, on July 30, 1822, William and Mary welcomed their fourth child, William, Jr.   Two decades later, on June 16, 1842 young William married Rosamond Michael, daughter of Philip Michael, at Pittsdown, New York.  No. 51 is often referred to as the William and Rosamond Clark House; so it seems the couple lived here at least for a few years.

At some point after the end of the Civil War the roof was raised, adding too full floors to the house.  In doing so, the architect carefully copied the wonderful paneled brownstone lintels to create a seamless alteration.   But quickly the neighborhood would change.  Thousands of immigrants from Europe entered New York Harbor.  As wealthy residents continued to move north, the old mansions were converted to boarding houses or simply razed for tenement houses.  Already a stable had replaced the mansion that sat at No. 49 Market Street, next door to the Clark House.

By 1876 “Miss French” was selling “household furniture” from No. 51; most likely from the basement level.   As the turn of the century neared, roomers came and went; many of them leaving by a horse-drawn hearse.  On March 1, 1897 63-year old John Huggard died in his room; as did William B. Reed two years later on June 7, just 20 years old.  In 1902 36-year old John J. Driscoll died here on the 11th of April, followed by 50 year old Kate Daly three months later.

As the Great Depression cast its pall over the nation, Columbia University owned the “four story tenement building.”  When the institution sold the building at auction on December 13, 1945, it was assessed at $515,000—about $5 million today.

As the neighborhood continued to change and Chinatown engulfed No. 51; amazingly little happened to the superb façade of No. 51 Market Street.  Although the windows were expectedly replaced; even the original 1825 door survived.

In 2010 the front stoop was removed.  Its replacement tries valiantly to look like brownstone and the railings are a sympathetic take on the 19th century design.  The refined house—so starkly out of place today—is a rare glimpse of life on Market Street when only the wealthy merchant class called it home.


photographs by the author
Posted by Tom Miller at 2:44 AM