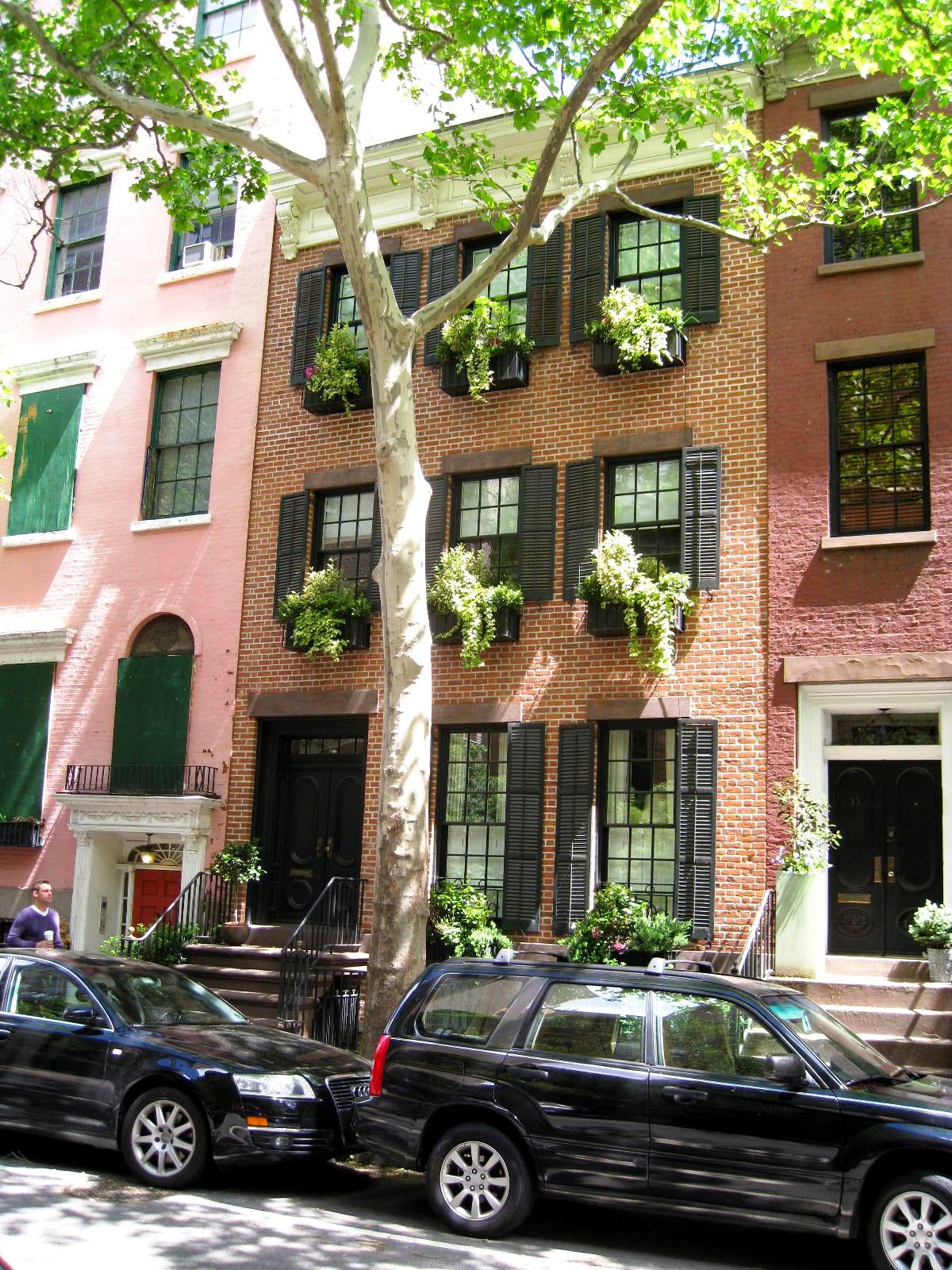 In 1831 John Brown began construction on his wide brick-faced home at No. 35 West 10th Street.   Two stories tall with a dormered attic, it boasted a few extras—Flemish bond brickwork and a sweeping stone stoop above the brick basement level, for instance—that marked the house as a step above normal.  But, unlike the lavish Henry Brevoort mansion that would soon rise nearby on Fifth Avenue and 9th Street and set the bar for Fifth Avenue residences, Brown’s was a merchant class house.

Within a few years of the completion of Brown house in 1832 other homes along the block would appear.   The family retained possession for years, with Dorcas Brown (possibly the wife or daughter) listed as living here.

In 1871 it appears that a room was rented out.  Elmer Poulsen was a senior studying at Columbia College.  The young man was from Cameron, Missouri; but listed his New York address as No. 35 West 10th Street.

Interestingly, when real estate operator Alida Van Schaick sold the house to Isaac E. Wright (another property buyer and seller) on February 1, 1881 the Real Estate Record & Builders’ Guide still described it was a “two-story brick dwelling.”   Yet the alterations that resulted in the full three floors we see today reflect architectural trends popular around the beginning of the Civil War—the leafy, scrolled brackets of the paneled cornice, the mid-Victorian double doors, and the extended parlor floor windows.

In 1898 Philip Webb lived here.  Webb was employed by the Lehigh Valley Railroad in the freight department.  In December that year he and two coworkers planned a night of debauchery in Manhattan’s notorious Tenderloin District.  It did not play out well.

One of the men, named Hammond, backed out at the last minute; but 31-year old Thomas McKeever came into the city on Saturday morning December 10 and met Webb.  A married man living in Roselle, New Jersey, he told his family he would not be home until Sunday “as he intended to go shopping,” reported The Sun two days later.

The newspaper said “He intended purchasing gifts for his four small children.”  But the well-to-do man and his cohort, Philip Webb, had carousing in mind as well.

The Sun said McKeever “lived in good style, became quite popular and was admitted to the best society in the village.  Some time ago he joined the Roselle Casino, the leading club of the place, and became an active member.”

With his excuse in place, Thomas McKeever set off with Philip Webb on a night of eating and drinking that ended up “in the apartments occupied by Sadie Williams and Maggie Winnie” at No. 257 West 39th Street in the seedy neighborhood known as Hell’s Kitchen.

Not long after the men arrived, McKeever complained of feeling ill.  As Webb and the two disreputable women looked on, his condition worsened and he died.   It was not until nearly 10:00 on Sunday morning that the death was reported.   The women were questioned by police and released.

While the Coroners’ Physician Philip O’Hanlon conducted an autopsy, Philip Webb had the uncomfortable task of notifying McKeever’s family.  (On a side note, it was O'Hanlon's daughter who, two years earlier, had inspired the New-York Tribune’s famous “Yes, Virginia, there is a Santa Clause” editorial.)

Webb first arranged to have the body removed to James Winterbottom’s undertaking business at No. 638 Sixth Avenue.   Then in the afternoon he telephoned New Jersey, and friends broke the news to his wife.

The Sun described her as “prostrated” and said “She is in a delicate condition and it is feared that the shock of her husband’s death may prove fatal.”

Although the autopsy found that the death was caused by liver and kidney disease, the family would have to suffer the humiliation of the respected man’s corpse being found in the bed of a prostitute.  Philip Webb’s public embarrassment was no less severe.

Although No. 35 West 10th Street was relatively small; it sat on a well-respected block where millionaires still lived in mansions built a generation later.  On February 5, 1903 Harry Horton Benkard married Bertha King Barlett in a sumptuous ceremony in Grace Church.    The pews were packed with the upper echelon of Manhattan society—Mrs. Stuyvesant Fish, the Robert Livingstons, Reginald C. Vanderbilt, Isaac Townsend and his daughter, Mrs. William K. Vanderbilt and her sister Mrs. Hermann Oelrichs, and the Stephen Van Rensselaers among the virtual Who’s Who of society.

The New-York Tribune reported, the following day, “On their return from their honeymoon they will live at No. 35 West Tenth-st.”

The newlyweds’ choice of the quaint Federal-style house was perhaps prompted by Bertha’s intense interest in the past.  She was among the first to collect American furniture and a period drawing room from the Benkard’s Long Island estate was later installed in the Metropolitan Museum of Art.   They barely had time to move their things in following their honeymoon trip, before they were off to Newport In July 1903.

By 1910 high-profile attorney John G. Milburn, Jr. owned the house.   On the afternoon of November 8 that year burglars broke in.  They made off with a small iron safe but inadvertently left behind a bag of loot including a clock.  Their mistake would change the direction of American forensic investigations forever.

New York detectives were just beginning to use a new system for identifying criminals—the fingerprint.  When police opened the bag of valuables left behind, they pulled out a clock and on its glass face was a clear fingerprint.  Since 1903 the New York State Prison system had been fingerprinting prisoners and other states followed suit.

Detectives compared the print with those of Harry Peck, a criminal recently released from the Charlestown, Massachusetts prison.  The prints matched.

They went to the apartment of Harry Peck on November 18.  As he “pushed his way” into the apartment, Detective O’Farrell noticed a small photograph on the floor.  He remembered that the list of stolen items included a gold locket with Mrs. Milburn’s photo inside.  “It was that of Mrs. Milburn, he says,” reported The New York Times the following day.

A suitcase in the apartment held many of the articles taken from the 10th Street house.  Milburn and his roommate, Joseph Cohen, were arrested.  Both men, it was reported, had prison records for burglary, robbery and other offenses.

Three days later the crooks appeared in court for the setting of their bail.  A stage actor was there as well, studying for a role.  The New-York Tribune explained “Sitting with Magistrate Barlow during the hearing was H. B. Warner, the actor, who last year created the part of the safebreaker in the play ‘Alias Jimmy Valentine’”  When their trial date rolled around on January 12, “The prisoners broke down…and pleaded to burglary in the third degree.”  The Sun noted “It was the first conviction by the finger print method obtained in this country.”

The very wealthy Milburns spent much of their time at their country estate near Great Neck, Long Island and in Europe.  John G. Milburn, Jr. was a well-known polo player who repeatedly appeared in the social pages playing with partners like Raymond Belmont or H. C. Phipps.

In the meantime Anne Goldthwaite was making a name for herself in the art world.   Born in the South to a former Confederate Army captain, she had studied in New York’s National Academy of Design.  She briefly studied in Paris beginning in 1907, where she met Gertrude Stein.  As war clouds developed over Europe, she returned to the States.

On October 24, 1915 The Sun remarked “If Meier-Graefe should ever revise his ‘Modern Art’ he ought certainly to devote a dignified chapter to Anne Goldthwaite, by the side of the most gifted men.”

A month before that article, John G. Milburn, Jr. had leased the West 10th Street house to the artist.  It was the perfect location for her.  By now Greenwich Village was established as the center of Manhattan’s artistic community and the West 10th Street block not only housed artists like Kikishi Yama, sculptor Charles Keck, and D. Maitland Armstrong; but the famous 10th Street Studios building was just three houses away.

Like many Greenwich Village denizens of the period, Anne Goldthwaite was actively involved in social issues.  Among her most passionate causes was women’s suffrage.   On June 3, 1916, when the New York Giants met the Cincinnati Reds on the field of the Polo Grounds, Anne Goldthwaite was there.  It was Suffrage Day at the ballpark.

“A hand-made New York State silk suffrage banner, designed by Anne Goldthwaite, an artist, will be unfurled for the first time at the game,” reported The New York Times that morning.  “It was made to carry at the head of the New York State division of the suffrage parade to be held in Chicago on June 7.”

The suffragist leaders had fashionably coordinated Anne’s banner with the uniforms of the fund-raising vendors.  “The colors in the banner will be shown in the costumes of the girl candy sellers, who will wear blue smocked frocks, with blue money bags and yellow sashes.”

Anne Goldthwaite remained in the house at least into the 1920s.  Around 1940 it was acquired by attorney Philip Wittenberg and his wife.  For years Mrs. Wittenberg would open the rear garden for the Little Garden Clubs of New York’s annual tours.   In June 1946 the tours started again after being halted by World War II.    That year The New York Times wrote “A home which carried out the same verdant restfulness of the church garden was the brick house of Mr. and Mrs. Philip Wittenberg at 35 West Tenth Street, where a blue-tiled circular fountain with four fish designed by the late Vally Viselthier offset the solemnity of a square ivy-bed.”

“Mr. Wittenberg pointed out that real estate men had been eyeing the sites of both the jail and the courthouse as ‘a nice piece of property’ for a new apartment house,” reported The Times.

“And when real estate people decide something is a nice piece of property you might as well go home unless you are prepared to stand up and fight,” he told the assembled “Village community leaders, artists, writers, realtors and architects.”

The Committee triumphed and in 1967 restoration and renovation efforts began on the New York landmark. 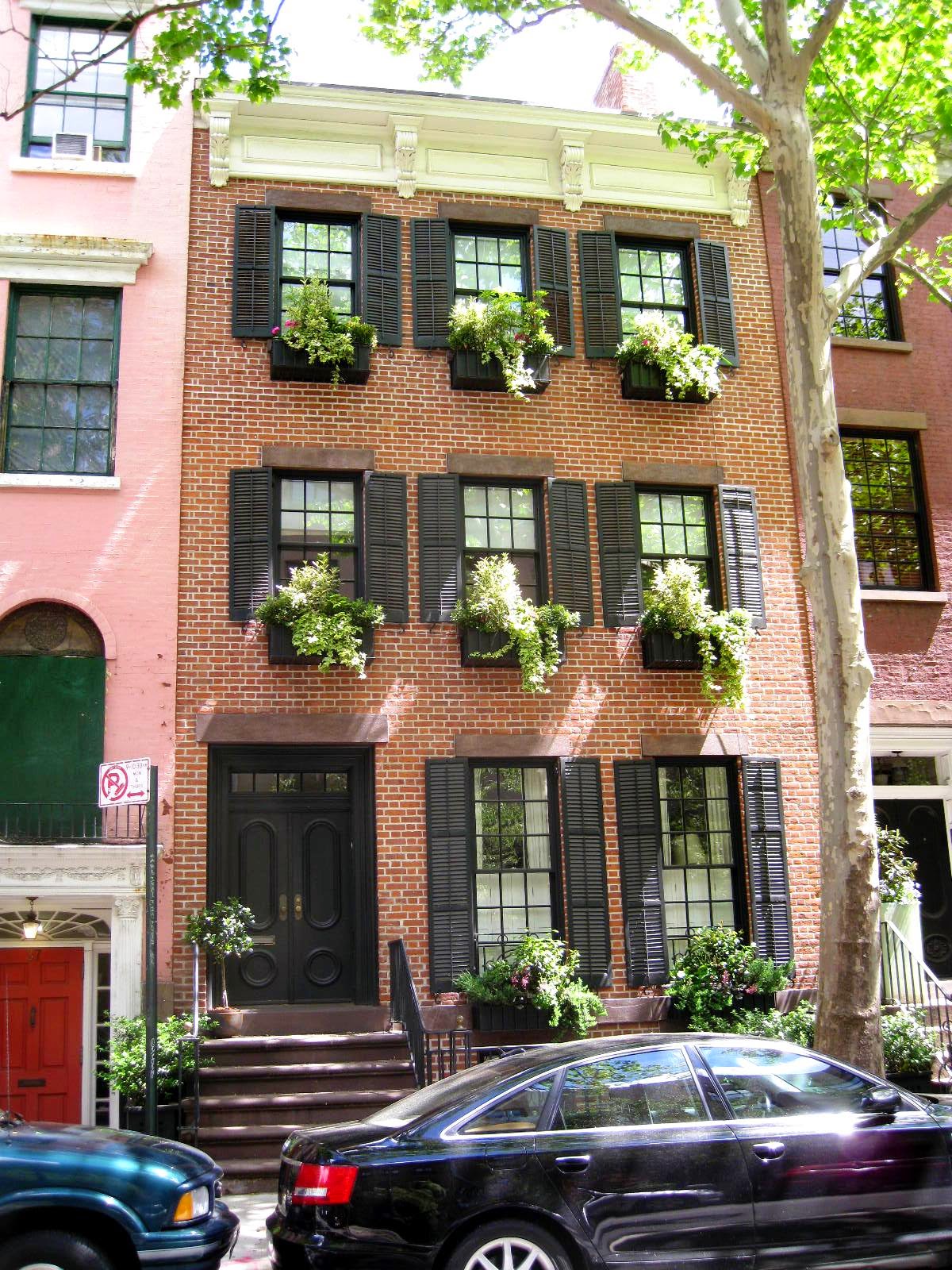 The charming brick house remains a single family home after nearly 200 years; an important tile in the fascinating mosaic that makes up this block of West 10th Street.