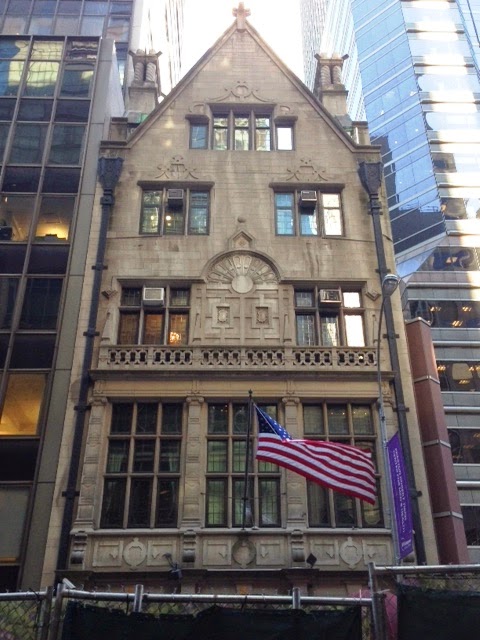 In December 1904 Minturn Post Collins, gave a lecture to the Real Estate Class of the Y.M.C.A on “Fifth Avenue Investments.”   He began saying “The first point noted on studying the map of the city is the central position of Fifth Avenue.”


The wealthy newly-wed with the impressive name knew what he was talking about.   Active in real estate, he was also President of the Bankers’ Investing Co. and he lived just a block from Fifth Avenue at No. 57 East 55th Street, between Madison and Park Avenues.  Collins’ comfortable brownstone-fronted house sat among similar high-end residences built a generation earlier.  But the “central position” of Fifth Avenue created a dynamic that would change the neighborhood; even a block to the east.


A year earlier, in June 1903, Collins had wed Flora Isham, daughter of the wealthy William B. Isham, President of the Bond & Mortgage Guarantee Co.  The couple was married in the sumptuous Isham country estate north of the city.  They would not remain long on East 55th Street.


The Fifth Avenue neighborhood of the turn of the century was a tense stand-off between advancing commerce and wealthy mansion owners.  Even as many millionaires fled northward along Central Park, others moved in.  Old brownstones, like that of Minturn Post Collins, were either radically renovated into lavish, modern mansions, or razed and replaced.


While the Collins were considering leaving the area, Martin Erdmann was preparing for his retirement.  In 1906, at the age of 42, the banker stepped down from his position as partner in Speyer & Co.  He was a member of the New York Stock Exchange and had served on its governing committee.  While he retained his directorship in the Chesapeake & Ohio Railroad and was a trustee of the Montefiore Hospital, he now had extensive leisure time to devote to his passion: collecting mezzotints.


But first he would built himself a lavish new home.  The bachelor millionaire purchased and demolished the Collins house at No. 57 East 55th Street.  He contracted the architectural firm of Taylor & Levi in 1908 to design a mansion in its place that reflected his social and financial statue


The commission was one of the firm’s first; Julian Levi and Alfredo S. G. Taylor having joined forces the year before.  Their design drew inspiration from the German Renaissance and the resulting mansion, completed in 1909, was a radical departure from its traditional high-stooped neighbors.


Unlike its unassuming and unmarried owner, the house called attention to itself.  By doing away with the space-hogging stoop, the architects added precious interior feet by pulling the façade outward, almost to the property line.  They deftly balanced the somber Germanic tone of the architecture with a capricious storybook quality.   A grouped set of leaded windows in the gable (the height of which nearly equaled the width of the building), began a cascade of openings down the façade, increasing in height and width with each lower floor.


Carved stone railings, decorative strapwork and salt-turned chimneys combined in an imposing fantasy.  Perhaps to protect Erdmann’s highly valuable art collection, the architects claimed they had produced “the most fireproof residence in Manhattan.”


The highly unusual design caught the attention of architectural critics who were torn in their assessment.  Architecture commented that it was “conceived in so different a vein from most New York houses that its propriety can be questioned…but there is much in this house to awaken an intelligence lulled to sleep by monotonous repetition of classic forms.”


Ermann moved in with his extensive art collection and his staff—a footman, parlor maid, cook, housekeeper, chamber maid, head maid, butler, and “horseman.”  Contemporary photographs of the interiors show carved paneling, intricate stairways, long groin-arched halls and heavily-worked ceilings.  A mixture of furniture styles coexisted with one another.  In one room a Hepplewhite side chair, a Dutch dowry chest and a Chippendale side table shared space.


In almost every room could be seen mezzotints—some frame against frame—hanging on the walls.  Mezzotint printmaking started in Germany around 1642.  The process was used mainly to create portraits and starting around 1760 British collecting of mezzotints was a fashion among the wealthy.  Ermann’s collection was apparently among the largest in the United States. 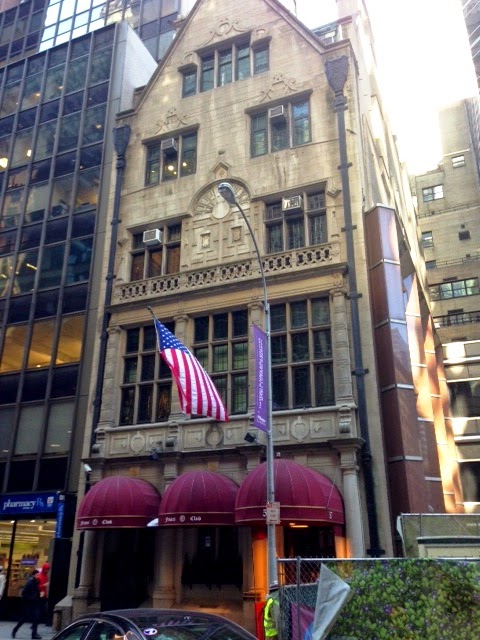 While most of New York society swirled within the dizzying eddy of balls, receptions and dinners, Martin Erdmann seems to have kept to himself.  While he kept a solitary box at the Metropolitan Opera, his name rarely appeared in the society pages as he quietly busied himself with collecting.


In the meantime the Friars Club, a social club for men in the theatrical industry—actors, impresarios, playwrights, and others--had been established in 1904.  As a fund-raising activity, the group initiated its annual Friars Frolics in 1911.  Among those working on the entertainment were Will Rogers, Victor Herbert, and George M. Cohan.  For his part Irving Berlin wrote “Alexander’s Ragtime Band” for the event.  The funds raised went towards a permanent clubhouse, “the monastery,” which opened in 1916 on West 48th Street.


After nearly three decades of living alone in his grand East 55th Street mansion, the 73-year old Martin Erdman died of a heart attack in the house on the afternoon of January 27, 1937.  His $5 million estate was divided, mostly, among his three sisters.  The collection of mezzotints that he had lovingly labored over for decades was carefully packed and shipped to Christie’s Auction House in London.


A two-day sale in December of that year drew collectors and museums from around the globe.  The British Museum acquired 19 “fine English mezzotints” according to a telegram to The New York Times from England.  “Especially notable among the lot that the museum has obtained, according to experts, is an anonymous plate after Sir Joshua Reynolds showing a young girl holding a rough-haired dog in her arms,” it said.


Erdmann’s mezzotints, which a London reporter said had “aroused considerable interest here”  brought what he deemed “fairly high” prices.  A print of Lady Hamilton as “A Bacchante,” after Joshua Reynolds was purchased by the London dealer, Colnaghi, for 430 pounds—about $42,000 in today’s dollars.


By now the Midtown neighborhood around Erdmann’s mansion was nearly devoid of homes as business buildings sprouted up around it.  The house was purchased by real estate broker Frederick Brown who stayed here for five years.  Then in 1943 he sold it to the American Institute of Physics.


The Institute published technical journals, like the Journal of Applied Physics, and was involved in experiments and research.  On October 29, 1945 the Association of Manhattan District Scientists (which took its name from the code name of the Manhattan Project—responsible for the creation of the atomic bomb) issued a searing statement here calling for international control of the atomic bomb.  By November 1956 the American Institute of Physics was looking for a new, more modern facility and announced a campaign for $500,000 to finance a new building.


Meanwhile, the Friars Club had struggled through the Great Depression, finally being evicted from their clubhouse for failure to pay a grocer’s bill of just over $1,000.  By now, however, the club was back on firm financial footing and acquired the Ermann mansion in 1957.  The new "monastery" formally opened in November.


On that night Joe E. Lewis, then Abbot of the club, led a procession from their former clubhouse to the new one.  Street performances were carried on outside the house and then, in a gesture symbolizing that the doors to the clubhouse would always being opened, Lewis threw the keys into the street.


Some of the rooms took on the names of notable club members.  The Round the World Bar was named for former Abbot Mike Todd’s 1956 movie, Around the World in Eighty Days.  On the second floor are the Joe E. Lewis Bar and the Milton Berle Room; a floor above are the Frank Sinatra Television Viewing Room and the Ed Sullivan Reading Room.


Like most of the exclusive social clubs at the time, the Friars had a male-only membership.  In 1983 the first woman to attend a roast came about when Phyllis Diller disguised herself as a man and crashed the event.  The end of the male-only status came in 1988 when Liza Minnelli became the first female invited for membership. 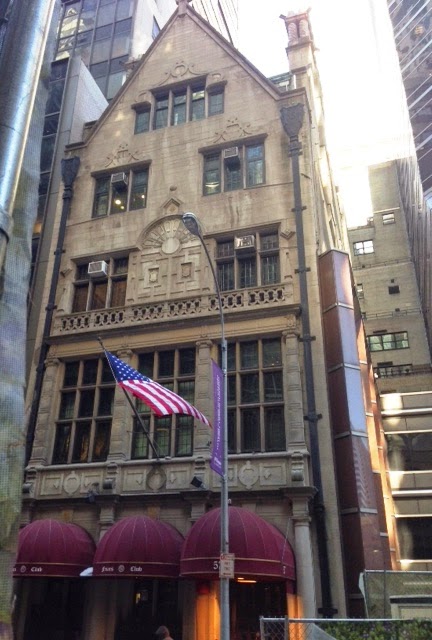 Martin Erdmann’s architecturally remarkable mansion is little changed.  Built for a quiet, introverted man who shunned attention; it is now the home away from home for those who definitely do not.