Until the last years of the 19th century New York’s newspapers were centered on Park Row, knicknamed “Newspaper Row,” in lower Manhattan.   James Gordon Bennett, Jr. made a gutsy decision in 1893 to abandon the newspaper district and following the northward expansion of commerce.  He leased the triangular plot of land at the intersection of Broadway and 6th Avenue, between 35th and 36th Streets—an oddly shaped piece of land that would become Herald Square.

A decade later The New York Times would follow, going even further uptown.  At the turn of the century Longacre Square was somewhat overlooked.  The center of Manhattan’s carriage building industry, it was named after Long Acre in London—that city’s carriage center.  But the nearby Grand Central train station on 42nd Street and the proposed Pennsylvania Station on 34th spelled doom for the old buildings of Longacre Square.  Already theaters had begun moving here from the 23rd Street entertainment district.

By August 4, 1902, when The New York Times made its surprising announcement, modern hotels and theaters had already begun to dot the urban landscape.  Like The Herald, the newspaper had acquired a triangular-shaped plot.  It was bounded by Broadway, West 42nd Street, and Seventh Avenue and The Times said it “will at once begin the erection thereon of a large modern steel-construction building, primarily for its own use.”  The announcement named Cyrus L. W. Eidlitz, son of influential architect Leopold Eidlitz, as the architect.

Most of the plot of land was taken up by the once upscale Pabst Hotel.  Otto Strach, one of its architects, put the cost of the building at $225,000 and its interior decorative work at $60,000.  The New-York Tribune said of it “The Pabst Hotel prided itself upon its bar and its rathskeller.  No money was spared to make both attractive.”  But the handsome hotel would have to make way for the 20th century.

On June 27, 1903 The Times published the first rendering of its intended building.   An article explained to readers that the bulk of the newspaper’s activity would be subterranean—the press and stereotyping rooms, for instance.  The newspaper offices would be on the ground floor, the composing room would be high above on the 16th floor, and the 15th floor would house the newspaper's business offices.  The majority of the upper building would be leased.  The Times was quick to point out that the “detachment of the site” made possible windows on all sides; a tremendous marketing asset and, in the days before air conditioning and a considerable plus for tenants.

Eidlitz designed what would be the second tallest building in Manhattan and drew his inspiration from Giotto’s campanile in Florence.  While the Pabst Hotel had faced 42nd Street, looking southward to the city, Adolph Ochs, publisher of The New York Times and Eidlitz realized that the future was to the north.  The Times Building would turn its back to 42nd Street and look uptown.   Its 375-foot tall tower would diminish the neighboring buildings, and its elaborate decoration would astound.

Eidlitz created a five-story base of pink Milford granite above which were 13 floors of sand-blasted, cream colored terra cotta, followed by the impressive tower.  As the building rose in 1903, The Times kept readers abreast, reporting on details like the nearly 16 foot ceiling in the main hall and the marble wainscoting.   “The doors are to be made of red oak.  In every detail of finishing the contractors are to exercise the greatest care in their selections, and their contracts call for the best quality and most advanced designs in every device or appurtenance upon which will depend the comfort of those who occupy the building,” said the newspaper on October 25 that year.

Cyrus L. W. Eidlitz, who worked on the project with his partner Andrew C. McKenzie, proudly stated “And it is well worth noting that not a single piece of the stone in that building has ever touched Manhattan Island.”

Early in 1904, as the Times Building neared completion, August Belmont made the suggestion that Longacre Square be renamed Times Square.  On April 5 the Board of Alderman met and approved the name change.  “There was not a single dissenting voice to the proposition,” reported The Times the following day.

The Italian Renaissance style skyscraper (erroneously termed “Gothic” by The Times) opened in September to critical acclaim.  Brooklyn Life newspaper said “The new Times Building across the river offers abundant evidence that if we must have skyscrapers they need not necessarily be ugly.”

Three months later, on New Year’s Eve, marketing genius Adolph Ochs, set off fireworks from the top of the building.  A crowd of about 200,000 people crammed into Times Square to watch.  It was just the beginning of a New York tradition involving the Times Building and New Year’s Eve.

At the time the problem of keeping one’s pocket watch accurately set was solved worldwide by the time ball.   Tall poles which pierced large balls, usually made of copper, were erected on high buildings.  Triggered by telegraph signals from an observatory—in New York they came from the U. S. Naval Observatory in Washington D.C.—the balls would drop precisely at noon.  Businessmen with craned necks waited for that moment to reset their watched.

In 1907 Ochs hatched another plan.  He had the newspaper’s chief electrician, Walter F. Palmer, build a electrically-lit time ball that would drop from a flagpole atop the Times Building exactly at midnight on New Year’s Eve.  Ochs could have had no inkling of what he had just begun.

In 1912 people passing the Times Building miraculously were unscathed when a 150-pound coping stone fell from the 16th floor to the pavement below.  “A dozen persons, most of them young girls on their way to lunch from the office buildings in the vicinity were endangered by the falling stone,” reported The Evening World on April 2.

The newspaper (which preferred to ignore the renaming of the Square, now eight years old) related the panic of one near-victim. “One man was missed by not more than three feet.  As the stone landed right behind him he pulled his hat down on his head and started up through Long Acre Square regardless of traffic.  When last seen he was passing Forty-seventh street in the middle of Broadway and going strong.”

Along with The New York Times, the building filled with offices like that of the Banking Department of the State of New York on the 6th Floor.  In 1914 the department offered “building lots, houses and bungalows at prices which are conceded to be REAL BARGAINS.”

Before its move to Hollywood, New York City was still the center of the motion picture industry, and the Advisory Board of Motion Picture Directors had its offices in the building.   On July 24, 1918, with Europe embroiled in World War I, The Evening World reported that the Board “wants to produce some pictures which will help in all forms of war work.”  James Vincent, Secretary of the Board, requested writers to send their plot ideas to him.  “Mr. Vincent says he hopes the country’s best writers will help out along this line.”

The ornate Times Building was the anchor of Times Square and visitors from the world over marveled at its noble triangular presence for decades.  Inside thousands of employees would come and go; perhaps none of the non-writing personnel quite as remarkable as William White.

White was a “husky mechanic who is helping to install new elevators,” according to The Times on September 7, 1947.  A Bronx native he had held the job of elevator mechanic for about 12 years.  But, as the newspaper said, “There’s no telling where a concert singer will turn up.”  And this one turned up singing in a Times Building elevator shaft. 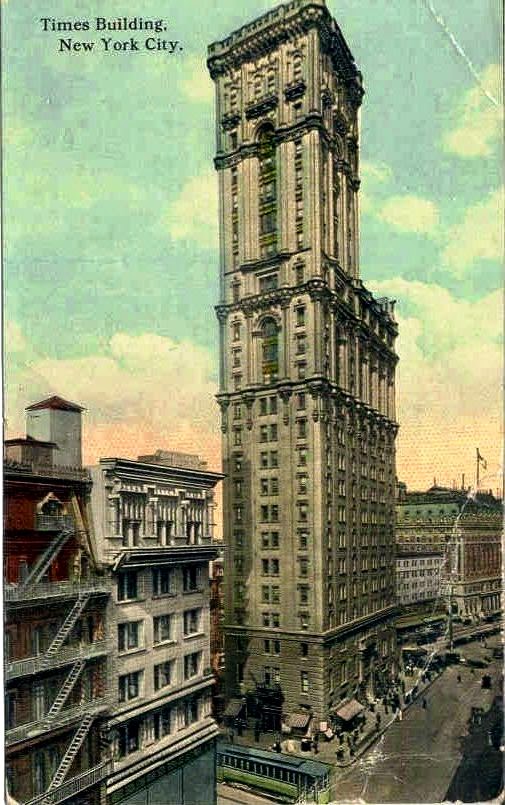 The Irish tenor had been discovered in 1944 on the "Major Bowes Amateur Hour."  Now on October 3, a month after The Times article, he was slated to give a concert in the Carnegie Recital Hall.

In 1928 The Times installed its famous “zipper” headliner around the building.  The innovative outdoor message board announced breaking news to the passersby with moving headlines.  It was one more seed that blossomed into Times Square tradition.

The New York Times moved into its new headquarters a block to the west in 1961.  The building was purchased by Douglas Leigh and renamed the Allied Chemical Building.  He was already famous for his iconic Times Square billboards like the smoking Camel cigarette sign.   Leigh commissioned the architectural firm of Smith, Smith, Haines, Lundberg & Waehler to modernize the Edwardian structure.

And modernize they did.

The firm peeled off the ornate terra cotta and granite façade, replacing it with concrete panels interspersed with flat marble slabs.  But the 60s Modern design would eventually be lost to view as well.

In March 1995 Lehman Brothers purchased the property for $27.5 million.  The financial services firm felt that the rent-producing potential of the building's exterior outweighed that of the interior.  A grid frame was installed over the entire structure to support advertising.  Only the ground floor was kept as leasable space.

One Times Square was sold in 1997 to the Jamestown Group for $117 million.  Today the pie-shaped former Times Building is cocooned in neon advertising.  The interior offices and hallways--where New York Times reporters scurried about and where motion picture executives read over war-time screen plays—are dark and deserted.

There may be nothing left of Cyrus Eidlitz’s Italian Renaissance skyscraper; but One Times Square lives on in its electric message board and its New Year’s Eve ball drop—ideas of Adolph Ochs more than a century earlier.
Posted by Tom Miller at 2:47 AM