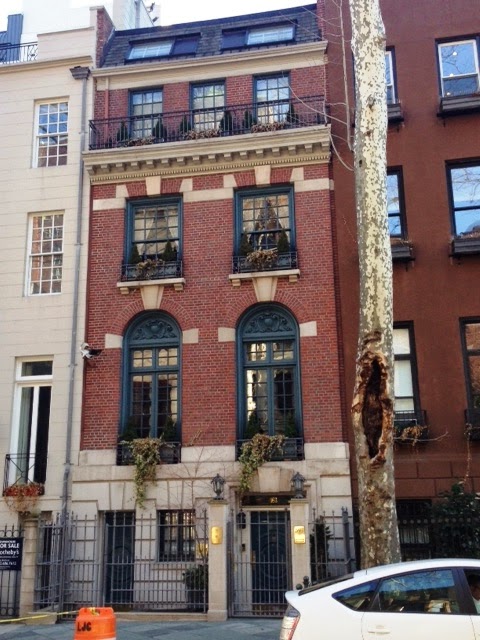 In the decade following the end of the Civil War the Upper East Side experienced a flurry of building activity.   Streets and avenues that dissected the former farmland and country estates were quickly lined with speculative brownstone homes.   The 64th Street block between Lexington and Third Avenues was one such example.  Before 1880 it had filled with nearly-identical high-stooped brownstone residences intended for merchant class families—among them was No. 163 East 64th Street.

Most likely the first owner was the unmarried Sarah Breese.   The Breese name was well-known in New York social circles; but if Sarah was related to that branch, her financial status was less impressive.  She was living in the house in 1875 while teaching in the Girls’ Department of Grammar School No. 53 on 79th Street near Third Avenue.   The devoted teacher was still unmarried in 1896 when she was appointed Principal of that department.

Within a few years C. A. Bustin and his wife Esther lived here.   Bustin was a designer of ships and while living here he patented the design of a two-keeled steamship.  The side-by-side keels were designed to keep the vessel from rolling.  No vacuous social butterfly, Esther was the sole director of S. Broadbent & Co. in 1902.

By now change was coming to the Upper East Side.  The upscale tone of Fifth and Madison Avenues had spilled across Park Avenue.  One by one wealthy New Yorkers purchased out-of-style brownstones and either razed or remodeled them.   As was common at the time, the Bustin house was in Esther’s name and on March 19, 1902 she sold it to Edith S. Graham.

Edith was the wife of architect Robert D. Graham, who was known professionally by his first initials.  Graham was a partner in the firm of Foster, Gade & Graham; architects who had already begun making a mark on the Upper East Side with an up-and-coming residential style—Neo-Georgian.   By the end of World War I they would design a number of upscale homes in the area clad in red brick with limestone or marble trim that harkened to the city’s Colonial days.

Four months after the purchase the wheels were already in motion to update the Victorian house.  On July 26, 1902 the Real Estate Record & Builders’ Guide reported that John K. Turton had received the general contract “for exterior and interior alterations” to No. 163.  The all-inclusive contract included “mason work, plumbing, plastering, heating, carpentering, etc.”  The estimated cost of the renovations was set at $12,000—about $325,000 today.
The completed home following the general lines of other Neo-Georgian homes being erected at the time.  Graham replaced the English basement with a rusticated limestone base.  The main doorway was adorned with a triple keystone, distinguishing itself from the lesser service entrance.  Above, three stories of red brick laid in a tapestry-like diamond pattern were enhanced with limestone details.  French windows at the 2nd floor were guarded by cast iron window boxes.  A shallow, metal-encased mansard capped the stately home.

A few years later architectural critic Montgomery Schuyler would comment on the trend, saying it was “what might fairly be called a new type in local domestic architecture.  It was, in essentials, a reversion to an old type, the New York house of the first quarter of the nineteenth century, as being more suitable to the needs and notions of the modern New Yorker than any manner of building which had followed it.”  He fervently applauded the passing the brownstone era, noting its “monotony.”

The Graham house would be one of the first to be renovated on the block.   There were ten people in the household—the three Grahams and a staff of seven.    The family would live in the 64th Street house with little attention.  They leased it for the winter season of 1913-14 to the immensely wealthy financier Grafton Howland Pyne and his wife, the former Mary Van Pelt.

At some point the house became home to Annie E. King.  Unmarried and wealthy, she was born in Newport and was perhaps better known in social circles there than in New York.   In 1923 the 77-year old Annie sold the house for $80,000, over $1 million today.

Wealth was the only common denominator between the new owner and his two predecessors.  Irving Blumenthal's fortune was made in the meat business.  His grandfather, Wolf Blumenthal, had founded the United Dressed Beef Company in the mid-19th century.  While Irving’s father, Isaac, was the head of the firm, it had became affiliated with Swift & Co.  By the time he purchased the 64th Street house, Irving was Treasurer of the company and before long would take on the position of President.

Irving and his wife, Clarice Altmayer Blumenthal, had a daughter, Suzanne, and a son Thomas.   Although his business was less glamorous than that of bankers, attorneys or captains of industry, Irving was a keen collector of art and he spent his leisure time painting oils and water colors.

The couple entertained lavishly, as well.  On October 30, 1928 they hosted a dinner-dance in the Crystal Room of the Ritz-Carlton.  The New York Times reported that it would be “in the manner of an Italian fiesta.”

Given Irving’s artistic proclivities, he and Clarice were probably pleased to announce Suzanne’s engagement to Claude Domec in May 1942.  The French artist had studied in the Lycee Louis-le-Grand in Paris.

Before long Irving’s health gave out.  He suffered an extended illness, finally dieing in the house on East 64th Street on the night of March 13, 1946.  He was 67 years old.

Unlike many turn-of-the-century homes in the neighborhood, No. 163 survived throughout the 20th century as a single-family residence.  In the 1970s it was home to Robert H. Ellsworth, an antiques dealer.  Ellsworth left the house around 11 p.m. on Friday night, May 13, 1977 for the weekend.   When he returned around 5:00 on Monday afternoon, he discovered burglars had been at work.

The collector told police that around half a million dollars in Oriental art were missing from the house—including paintings and other objects.   His extended absence gave them the time to break into a vault within the townhouse.

It was possibly too much for Ellsworth to take; in any event he sold the house that year for $650,000.  It was the first of a string of rapid turnovers and price jumps.  In 1980 it sold again, this time for $2.5 million; and again two years later for $4 million.   Commercial broker Kenneth Laub purchased the house in 1986 for the same amount.  He initiated extensive renovations; a few of which might had curdled the blood of R. D. Graham. 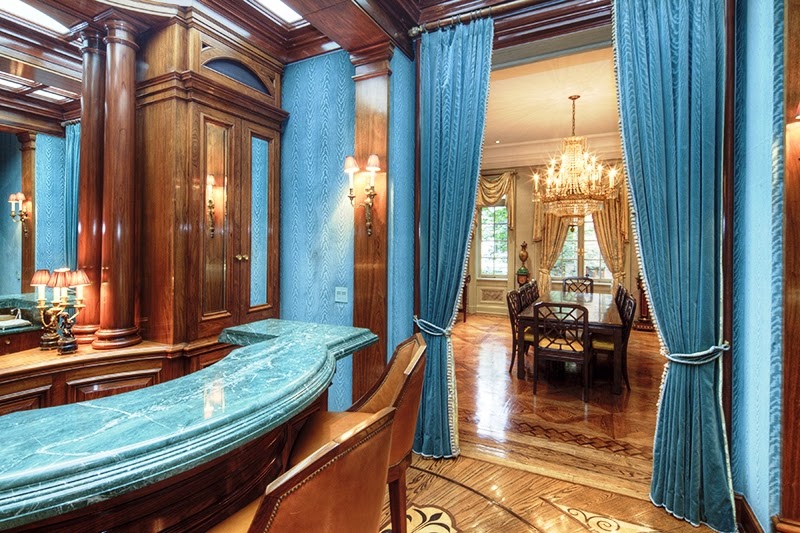 Laub installed a bar with a blue stone top in the living room and embellished other spaces with painted French panels and dripping crystal chandeliers—the antithesis of the home’s 18th century architectural style.

Despite the well-intentioned but unfortunate renovations inside, Graham’s pristine design survives outside; a fine example of the architectural trend Montgomery Schuyler referred to as “Old New York.”

non credited photographs taken by the author
Posted by Tom Miller at 2:41 AM