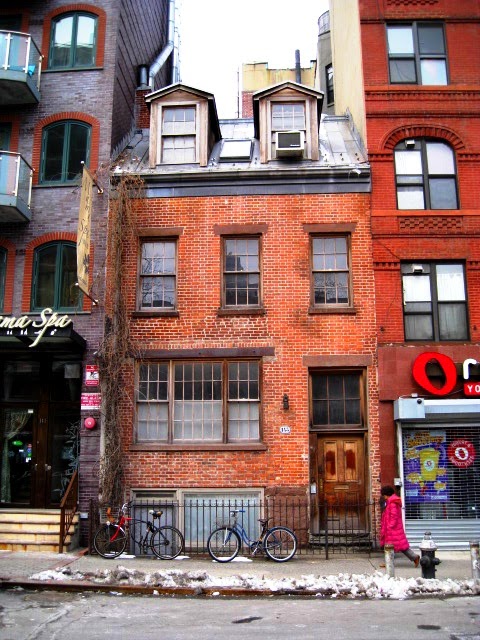 By the middle of the 18th century, the wealthiest New Yorkers maintained country estates and farms north of the established city.  Retreats from summer heat and crowded conditions, they would be one-by-one engulfed by the city which inched ever northward.

James De Lancey thought well ahead of the inevitable.  Having inherited his father’s more than 300-acre estate in 1760 on what would eventually become the Lower East Side, he had a portion divided into a grid of streets and lots.  Then the Revolutionary War dealt a harsh blow to De Lancey, who remained loyal to the crown.  Declared a traitor, he lost his land in the Act of Forfeiture and was banished.

The land was divided and sold at auction and by the late 1820s development was well underway.  George Sutton leased five lots on Allen Street from his in-laws, the Messerve family.  Another adjoining lot, facing Rivington Street, was part of the package.

By 1831 all five lots on Allen Street, Nos. 137 through 145, had been completed.  No. 143 was, like its neighbors, a two-and-a-half story brick house in the current Federal style.  A stone stoop rose to the entrance which sat above a shallow English basement.  Simple brownstone trim, and modest elements like the high dormers of the steep attic roof identified it as a merchant class house.

Sutton was captain and co-owner of the Empress which sailed back and forth from New York and Charleston.  In the 1840s a ship named the George Sutton sailed the same course; no doubt named as a tribute to him.

George Sutton retained ownership of No. 143 as a rental property.  Gertrude Ingersoll, the widow of Dr. John J. Ingersoll, moved in that first year and would stay for three years.  It appears she took in boarders, for at the same time Ebenezer Whiting, a city worker, lived here and in 1833 a third resident, Isaac Johnson moved in.  Johnson was a shipmaster and possibly worked for Sutton.

All three of the tenants were gone in 1834 when George M. Clearman took possession.  A grocer, he upgraded his occupation in city directories to “merchant” two years later.  He, like most of Sutton’s tenants, however, had a tie to the shipping industry and years later, in 1864, would be elected Commissioner of Sailor Boarding-houses.

In 1837 Sutton sold No. 143 to Joseph Durbrow, Jr.  The house was sold again, seven years later, to next-door-neighbor Thomas Haley, who lived in No. 141.  A mason and building, Haley was also a director in the Oriental Bank at the intersection of Grand Street and East Broadway.

Haley’s family would retain ownership until the 1920s.  They moved out of the house, however, by the late 1840s and by 1850 William T. Baker lived here.  Listed in Trow’s New York City Directory as a “clerk,” his daughter, Caroline Amanda Baker taught in the Primary Department of the nearby public school at No. 245 William Street, near Duane.

When Baker’s 42-year old sister-in-law, Mary Siater died on Saturday, October 14, 1854; her funeral was held in the house the following Tuesday.  The Baker family would continue renting the house from the Haleys for at least another two years.

By now the neighborhood was rapidly filling with mostly German immigrants.  Private houses were quickly being converted to multi-family residences.  In the first decades following the Civil War, most were razed to be replaced with tenement buildings; many of them overcrowded and dismal.

By 1880 two families were living in No. 143—a total of 13 residents.  Bachelor William Henry Berry lived here with his mother, sister and, astonishingly, two “lodgers.”  The other family was composed of Prussian immigrants David and Jesse Phillips and their six children.

That same year the Allen Street El opened—the rumbling, soot belching elevated train that darkened the street yet provided the poor residents affordable mass transit.  The convenience was a trade off; for the already depressing living conditions on Allen Street were now doubly so.
As the turn of the century approached, heated political battles between Tammany candidates and their rivals resulted in violence and fraud at the polls.  On June 7, 1898, a voter entered the polling place at No. 176 Eldridge Street and signed in as August Hoeber, living at No. 143 Allen Street.  But there was someone else at the polling place that day whom that the voter did not expect.

Nathaniel Feltman lived at No. 63 Allen Street.  He was an ardent supporter of Bernard Rourke who was trying to wrest the Tammany leadership from Martin Engel.  The New-York Tribune reported the following day that “Feltman said he was personally acquainted with Hoeber” and the imposter “was not he.”  To make matters worse for the would-be voter, right about this time the real August Hoeber walked in the door to vote.  The newspaper reported that Harry Archer’s arrest quickly followed.

Turn of the century census documents show six families living in the Allen Street house; a total of 19 people.  It is, therefore, not surprising that the Report of the Tenement House Department of the City of New York reported that on June 15, 1906 the building was cited for unsanitary conditions.

Reportedly, two of the 15 tenants in the house in 1912 were prostitutes named Lizzy and Mamie, both around 45 years old.  That was the year that the Haley family removed the stoop and removed the entrance to sidewalk level.  In 1913 architect Max Muller filed plans to join the two parlor floor windows as one sweeping shop window.

The Haley family sold both No. 141 and 143 Allen Street in 1920 to a mattress manufacturer, Louis Wahrsager.  He established his business in No. 141 and was still there, according to the Greater New York Industrial Directory, in 1957.  Meanwhile, he leased No. 143 to Max Seelenfreund, a Hungarian-born quilt manufacturer.

The Lower East Side was by now the center of Manhattan’s Jewish population.  Seelenfreund, who spoke Yiddish, moved his family into the upper floors while selling quilts from the commercial space.  He would be gone by 1939 when the store advertised “S. Kotlow, Men’s Neckwear.”

By now Allen Street had been expanded into a broad sun-washed boulevard, made even more so in 1942 when the elevated train tracks were removed.  Although the neighborhood continued to change, slowly attracting both the avante garde and a broad ethnic mix of residents; the Wahrsager family surprisingly held on to Nos. 141 and 143 until 1980 when it sold them to a group of artists.  Eventually No. 141 succumbed, like the rest of the little Federal houses, to demolition.  Only No. 143 remained. 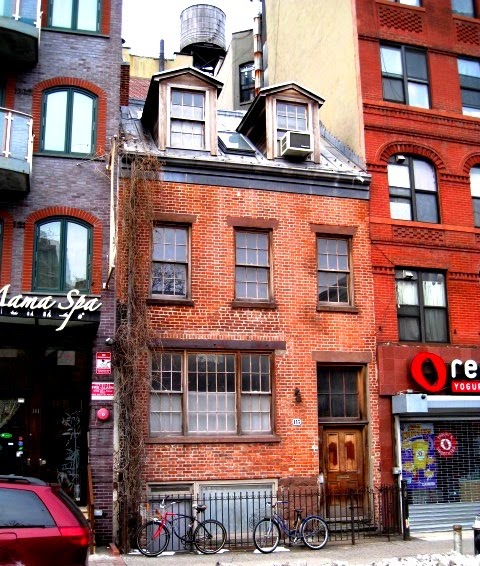 The miraculous survival and the surprising condition of the upper floors earned No. 143 Landmark designation in 2010.  Although nearly lost in the architectural mishmash along the block, it conjures visions of a residential Allen Street lined with similar homes.