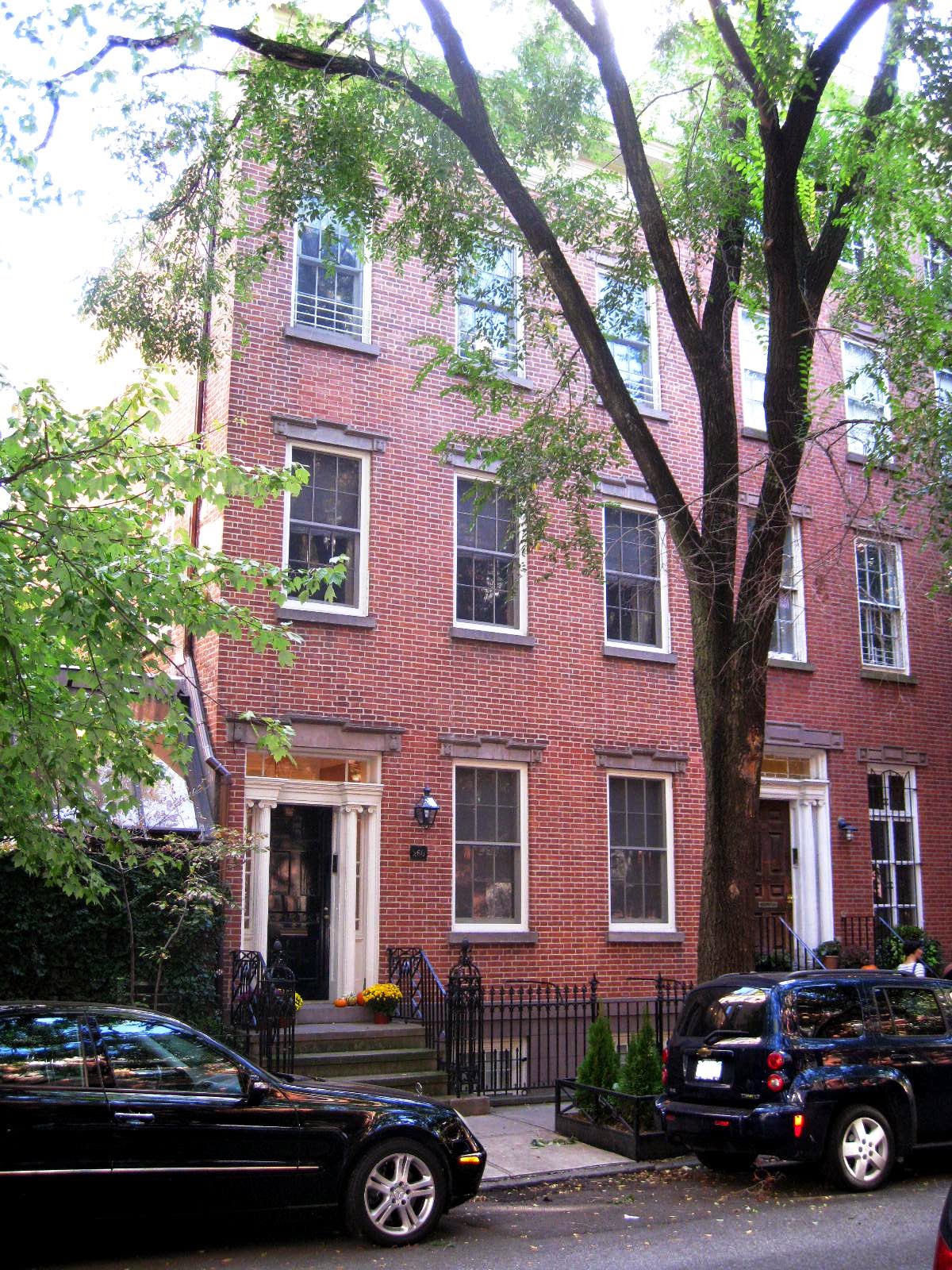 In 1828 John A. Mildeberger ran a highly successful tallow chandlery business.   He not only crafted candles but was a “soap boiler” as well; another by-product of the rendered animal fats.  The scope of his enterprise was evidenced that year in a court case over payment for a single delivery of soap.  The $638 in dispute would translate to about $16,200 today.  He was also a trustee of the Greenwich Savings Bank at No. 10 Carmine Street.

By now Greenwich Village was experiencing a tremendous building boom and Mildeberger got into the act.  He constructed several investment properties, one of which, No. 58 Hammond Street (which became 260 West 11th Street in 1864), was completed in 1830.   Two and a half stories tall, it complemented the home built next door at No. 262 two years earlier—the handsome Federal style entrances being almost duplicates.  Mildeberger did not scrimp.  In addition to the exquisite doorway, he added high-end Gothic-inspired iron railings with openwork newels.  The newels were topped with pineapples (the symbol of hospitality).  Handsome molded brownstone lintels adorned the openings.   The two stories of Flemish bond red brick sat upon a brownstone basement level.

Whether Seymour Spencer gave up his religious vocation in exchange for his grandfather’s wealth is unclear.  Mildeberger died in 1871; but in 1838 No. 260 West 11th Street had become the property of his son-in-law, Mark Spencer.

Louisa A. Bussing was leasing the house from Spencer in 1867, operating it as a boarding house.  An advertisement she placed that year resulted in a knock on the door on Monday May 27.  A man named Drury had brought his niece and hoped to find her a room.   She had recently arrived from Detroit, he explained, and had been staying at the Metropolitan Hotel.  Louisa Bussing deemed the girl to be respectable, and made arrangements for her to move in the following day.

Kate Norton was 19 years old and Louisa described her as “quite lively.”  She made friends with another boarder, Jane Reynolds, and each day her uncle, Mr. Drury, would visit her.  On the Sunday after she moved in, Drury and his wife both came to visit.

What all seemed to be a perfectly normal set of circumstances was anything but.  Drury was by no means the girl's uncle and Kate Norton was deeply troubled.  A simmering combination of Victorian proprieties, jilted affections, lies and deception was about to boil over.

In 1863 the smooth-talking Drury had seduced 15-year old Kate from her home in Chicago.  They lived together in Detroit as husband and wife for four years, all the while Drury promising Kate they would marry.  Then another woman caught his eye.  To Kate’s surprise and shock, he married the woman and moved to New York City where he opened a store.

Ruined and abandoned at the age of 19, with no means of support, Kate’s only option was to follow Drury.   Now, having been at Louisa Bussing’s boarding house more than a week with no change in her prospects; on Thursday June 6 Kate asked her friend Jane Reynolds to go to Drury’s store with her.  The meeting between Kate and Drury did not go well.

Jane stood aside while the two talked.  She said “she appeared to have some difficulty with Mr. Drury there; he went for a policeman, who advised her to leave the store, which she did.”  If Kate Norton needed any more evidence that her relationship with Drury was over; being expelled from his store by a policeman was all it took.

The girls returned to the West 11th Street house around 1:00.  Jane went to Kate’s room with her.  Kate “partially undressed herself; she was about to lie down when I left the room,” Jane recalled, “she refused to eat any lunch, and asked me if I would come in and sit with her.”

After eating lunch, Jane returned to Kate around 3:30.  “I went to her room and found her lying on the bed in a deep sleep; she looked so strange that I became frightened, and called Mrs. Bussing.  According to Louisa, “I went up directly and saw her lying on the bed; perspiration was pouring down her face, and the blood seemed to be settled under her finger nails; she was also frothing from the mouth; her features twitched, continually, and her breathing was deep and irregular.”

Mrs. Bussing rushed downstairs and sent for a doctor.  He arrived, said that Kate “would recover, but he could not remain.”  Frustrated, Louisa sent for Dr. Newby, who stayed a while.   But by the time he returned later, Kate Norton was dead.  The landlady searched Kate’s pockets and found a bottle of morphine.

Also in her pocket was a note:

Oh, grandmother, do pray that I may be forgiven, for my heart is broke!  It is so hard to be treated as I have been by him I loved so much.  O! Ed., I love everybody and forgive all, and hope to be forgiven.  I cannot live.  I must die.  He does not love me; he hates me.  He had me put out of his store, but I forgive all.  KATE

The teen then added a final thought.  “Pray that I may be forgiven.  Oh! Ed., do not take my cross off my neck-chain.”

The press, moved by Kate’s heartbreaking tale, depicted Drury as a cad.  “Miss Morton had been seduced, as is alleged, by this man, Drury, who subsequently married another woman, and cast off his victim,” said The New York Times.

No. 260 passed to Senator Mark Spencer’s son-in-law, Dr. Samuel Hall, who also dabbled in politics.  Hall ran for Senate in 1857.  The New York Times described Dr. Hall in 1873 as “a gentleman of wealth, leisure and culture.” 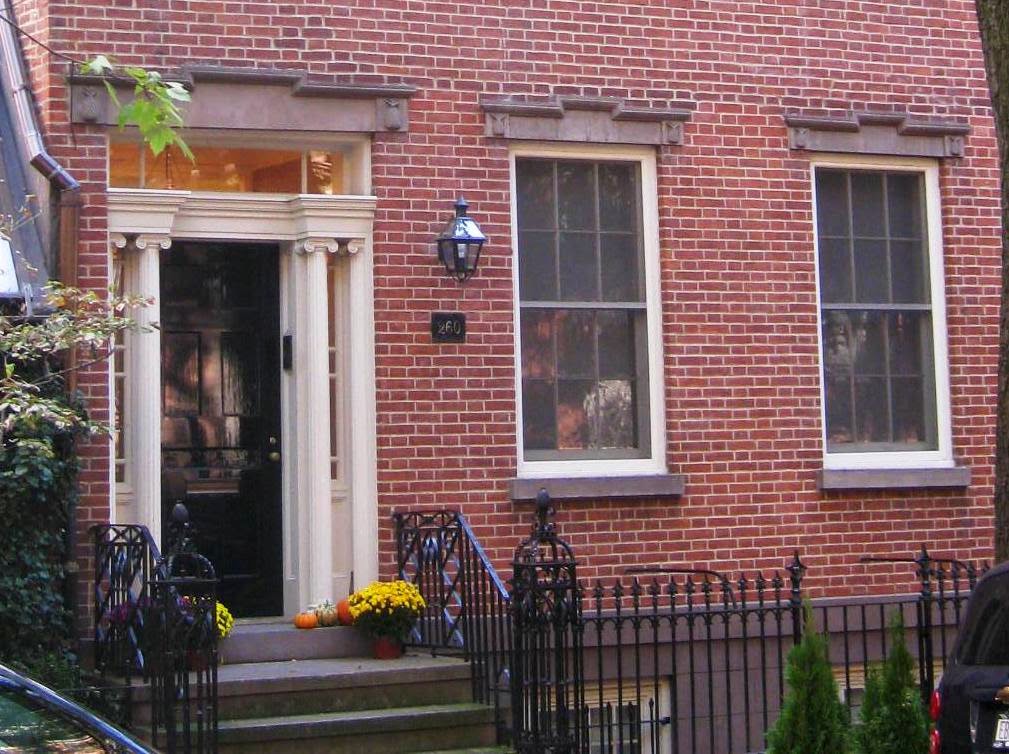 In 1872 Hall raised the attic to a full third floor.  Somewhat astonishingly, while the house got an up-to-date Italianate cornice; none of the existing Federal features were removed.  As a matter of fact, the brownstone lintels of the new section were carefully matched to the originals.

The house would see respectable boarders come and go throughout the years.  In 1884 James R. Steele was living here when he lost $25 to con artists Harry Rich and Andrew Levitt.  Detectives said Steel was a victim of “the old trick of advertising for treasurers of theatrical companies, requiring security, and pocketing the amount.”

“Miss Park” was here in 1906.  Possibly the daughter of boarders, she advertised in the New-York Tribune on November 13 “Young woman would read to invalid or child mornings or afternoons; terms very reasonable.”

In 1915 Margaret E. Hall sold what real estate men termed “The Hall corner.”  The Times said it was “one of the best known group of private dwellings in old Greenwich Village.”  For the first time since John Mildeberger erected No. 260 in 1830, it was passing out of the extended family’s ownership.  Included with the 11th Street house in the deal were five similar houses at Nos. 278 through 284 West Fourth Street, around the corner.

By now Greenwich Village was the center of avante garde ideas, music, poetry and art.  In July 1920 Elizabeth Walton purchased No. 260, announcing she “will remodel it for her own occupancy.”  The unmarried Walton exemplified the forward-thinking nature of the new Greenwich Village population.  She was chairman of the New York Urban League, Inc. for Social Service Among Negroes.  It was a remarkable post considering the times and Walton’s race and sex.

The inherent racism of the first half of the 20th century that Elizabeth Walton struggled to extinguish was evidenced in the opening paragraph of a New York Times article on December 4, 1925.  Elizabeth Walton spoke at a testimonial dinner the evening before; and even in its attempts to be unbiased, the newspaper was border-line offensive to 21st century readers.

“Algernon B. Frissell, Chairman of the Board of the Fifth Avenue Bank, was honored at a dinner given at the Town Hall Club in West Forty-third Street last evening, when white and negro friends paid tribute to him as a banker and a benefactor of the colored race.”

Following Walton in the house was the well-to-do Horace Andrew Davis and his wife Anna.  The couple moved from Brookline, Massachusetts.  On August 12, 1926 they were back in Massachusetts to witness the wedding of their daughter Esther Fisher Davis to Ralph Wolcott Brown at the summer home of Dr. Hallowell Davis.

Like Elizabeth Walton, Anna N. Davis was a fighter and activist.  She was secretary pro-temp of the War Resisters League in 1928.  The New York Times remarked that she “was interested in social work.”  By 1930 Anna Davis was living in Memphis, Tennessee.

In the 1930s Thomas Augustus Mason and his wife, Julia Wells Mason purchased No. 260 and converted it to two duplex apartments.   Mason had been an educator, teaching at St. Paul’s School in New Hampshire and then at Middlesex School in Concord, Massachusetts, before taking the post of secretary of the Thirty-fourth Street-Midtown Association in 1927.  On Valentine’s Day 1937 the 58-year old was stricken with a fatal heart attack in the house.  Julia lived on here until her death in 1941.  When the house was sold by her estate that year it was described as “containing two duplex apartments of five and six rooms.”  The assessed value at the time would be about $300,000 in today’s dollars.

Eleanor Copeland Ripley lived here in 1944 when her 70 year old father, Herbert Lawrence Ripley, died in the house.  He was well-known in the railroad industry, having served as a civil engineer with the New York, New Haven & Hartford Railroad for years.

No. 260 West 11th Street came on the market in 2001 for $3.2 million for the first time in almost 40 years.  The Observer noted “the duplex apartments have different styles; the lower one more contemporary, with a brand-new kitchen, and the upper one almost entirely intact from the building’s 1840 [sic] origins.”

The “Harvard educated couple” who bought the house took the upper floors, while renting the lower duplex at $6,000 a month while waiting to restore it.  That would happen four years later when the restoration firm Preserv completed what it described as a “complete rebuilding of the east and south walls, excavation and construction of a 2-story addition, and structural stabilization and rehabilitation.” 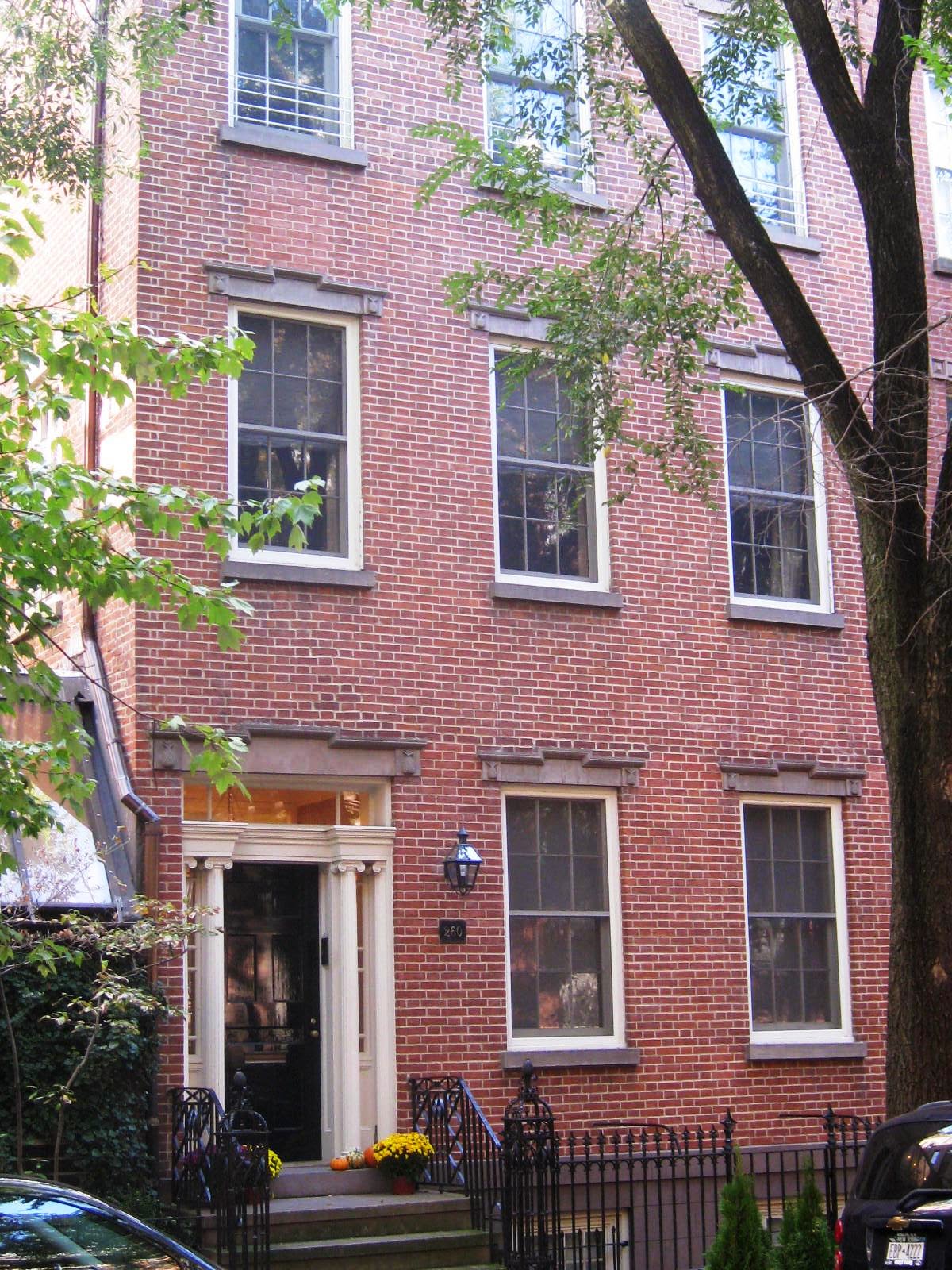 The charming house emerged as a single family home—a delightful relic of early Greenwich Village with a sometimes tragic history.