Although Jews first arrived in New Amsterdam in September 1654; their numbers would remain relatively low for almost two centuries and they endured severe discrimination.   But between 1812 and 1846 the Jewish population swelled from 400 to 10,000, and by the start of the Civil War there were than two dozen synagogues in the city.  Larger numbers did not translate, however, to wide-spread acceptance.

The Lower East Side in 1886 was the center of the German culture; but it was also populated with Polish, Dutch, Russian and other Central or Eastern European immigrants.  Manhattan’s Jewish residents settled here as well—not only because of the shared ties of culture and language; but because of the still rampant antisemitism.   Four years earlier James D. McCabe, in his New York by Gaslight, reflected the general attitude.

“The dealers in the street are nearly all Jews, the sharpest and most unscrupulous of their class, who do not hesitate to swindle their customers before their very eyes, and then call on the police to arrest their victims if they resist.”

In 1886 a group of Romanian Jews established the congregation Kehal Adath Yeshurin of Yassay, variously spelled Adath Jashurun of Jassy.  The immigrants had come from Lasi in Romania and established their synagogue at No. 131 Hester Street.  But by the turn of the century they were prepared to erect a fine new building.

At Nos. 68 and 60 Rivington Street were what the Real Estate Record & Builders’ Guide described as “brick dwellings, three stories, 21x 40.”  Adolph Schlesinger, a tenement owner, lived in No. 60.  In 1903 the venerable old houses were demolished and the congregation put architect Emery Roth to work designing a handsome synagogue to replace them.

Roth was born in Austria-Hungary to a Jewish family and arrived in the United States in 1884 at the age of 13.  He would become known for his Beaux Arts-style apartment houses; but this commission would require special consideration.  Like so many synagogue designers, he turned to Moorish Revival.   Gothic Revival by now was identified with Christian churches, and Greek Revival smacked of pagan worship.  Moorish Revival harkened to the pre-Inquisition days of relative freedom in Spain.

Roth designed a three-story brick and stone façade with cast iron details.  Contrasting rows of yellow and beige bricks created a striped effect.   The arched entrance was ornamented by two rampant lions each holding a shield.  Dominating it all was a sumptuous arched cornice over the “circle of light.”   A Hebrew inscription translated “This is the gate of the Lord where the righteous come to.”   Originally, onion domes would perch upon the flanking piers.

Construction had its snags.  On August 20, 1904 the city suffered a 10-hour downpour, described by The New York Times as a “deluge.”   The storm destroyed the portico, still under construction.

“Down at 58-60 Rivington Street a new synagogue is being built, and an ornamental arch of artificial stone is in course of construction.  This arch was so seriously damaged that it will have to be rebuilt,” reported The Times.  The lion figures had been cast in a concrete-like material which had not yet totally set.

“When the skies cleared the only things that remained of the lions were the rock pedestals on which each had rested.”

The lions were recast, installed, and within two weeks the synagogue was completed.  On September 5, 1904 the congregation’s scrolls were transferred from Hester Street to the Rivington Street synagogue.  It was no small affair.  The following day The Times remarked “The east side yesterday saw a parade the duplicate of which, it is said, had never occurred before in this country.” 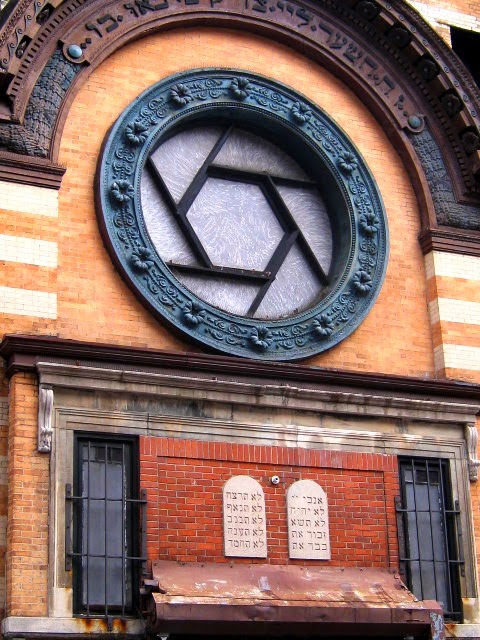 According to the account, thousands of onlookers lined the streets and 300 policemen escorted the marchers.  The scope of the procession was such that it took four hours to complete.  A band led the parade, followed by an open carriage in which four men rode; two held staffs with the flag of Zion and two held “a gorgeous cushion, on which rested a key of solid gold.”

Following the carriage were eight coaches.  In each were four congregation members who carried two scrolls each.  “Then came a thousand members of the congregation on foot, walking in fours,” said the newspaper.  But that was not nearly the end.

At the Rivington synagogue speeches were made on the stoop and then the keys were presented.  “The paraders then sang ‘The Star-Spangled Banner.’ The outer gate and the door were unlocked with the keys, and the members of the congregation filed into their new house of worship.”

Following the “simple” services inside, the newspaper said “The meeting ended with the singing of ‘Home Sweet Home.’  The crowd which followed the carriages and the marcher numbered 10,000, according to police.”

Despite the spectacle surrounding the opening of the synagogue, it appears that the congregation over-extended themselves in its construction.   On January 25, 1905, just four months later, congregation officials found themselves in court defending a $20,750 lawsuit filed by The Universal Building and Construction Company.   Two weeks later the Real Estate Record & Builders’ Guide reported that the Eagle Iron Works in conjunction with Universal Building and Construction had placed a lien on the property.

By 1907, mostly because of the infamous steamship General Slocum disaster that killed 1,000 immigrants, most of the German residents of the Lower East Side had moved northward to the Yorkville neighborhood.  This migration possibly contributed to the membership of Adath Jashurun of Jassy, recorded as 1,000 in 1904, to fall to just 200 in 1907.  Although the congregation tried to continue—holding a mass meeting in the synagogue on March 24, 1907 to protest Romanian antisemitic riots for instance—but time had run out.

The congregation was sued in foreclosure.  Although the synagogue was repeatedly on the list of properties to be sold at auction, somehow the officers managed to stall for a year.  On July 19, 1907 the New-York Tribune mentioned that the structure was “not offered for sale” in the Vesey Street auction rooms; and on January 8, 1908 the newspaper reported that the “sale of Nos. 58 and 60 Rivington street, a three story synagogue, 42x80 feet, was adjourned to January 14.”

But the sale was inevitable and the handsome synagogue became home to the First Warschauer Congregation.  Founded in 1889 by Polish Jews from Warsaw, the congregation had been worshiping at No. 84 Suffolk Street a few blocks to the east.

The Lower East Side was the heart of Manhattan’s Jewish community throughout most of the 20th century, and First Warschauer Congregation would remain here for decades.  In 1924 the synagogue was the scene of an unthinkable act when John Berthold of No. 644 East 133rd Street made the trip downtown to rob its poor box.  On December 6 Judge Mancuso of the General Sessions Court imposed a sentence of two years in Sing Sing for the crime.  Berthold had made away with a total of $5.36. 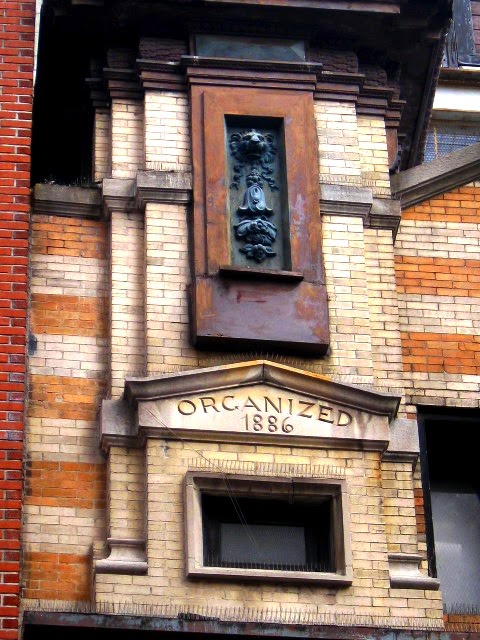 Although still heavily Jewish, by the 1970s the neighborhood had greatly changed.  First Warschauer Congregation moved out and in 1973 the building was converted to artists’ studios and living space.  A gruesome corrugated security gate replaced the portico with its rampant lions, and equally unappealing industrial doors were installed in the flanking entrances.  Nevertheless, much of Emery Roth’s façade survives as a reminder of a much different Rivington Street in 1904. 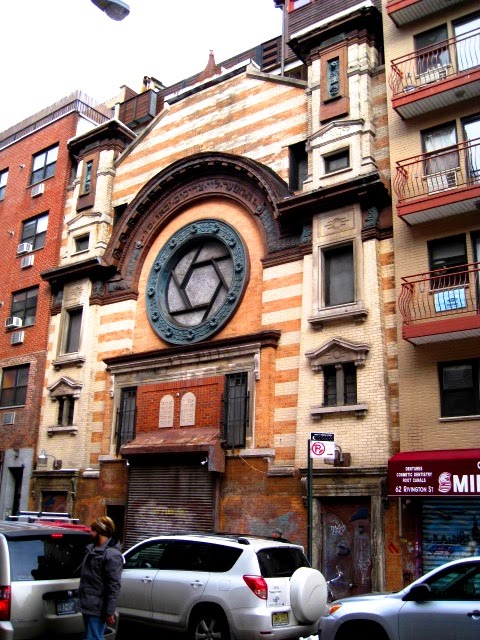